Why One Photographer Purchased the Canon EOS R

While Canon's RF glass has generally received quite high praise, the cameras in the R system have seen more mixed reviews given their feature sets. Nonetheless, after spending quite some time with the EOS R, one photographer has decided it is worth owning. This great video takes a comprehensive look at his reasons why he purchased the camera.

Coming to you from Dustin Abbott, this great video takes a look at why he decided to purchase a Canon EOS R after initially deciding not to when he first reviewed the camera last year. Abbott tends to be a very balanced and practical reviewer, and his perspective is generally very valuable if you are considering buying into the Canon mirrorless system. One of the biggest benefits of the system that does not get enough coverage is the fact that it handles EF lenses so well; in fact, some of Canon's EF lenses actually focus more quickly and accurately on the EOS R than they do on EF mount cameras. For many photographers who are deeply invested in Canon's DSLR system, this can make it far easier to make the transition. Check out the video above for Abbott's full thoughts.

Why ONLY one photographer purchased it?

Maybe. There may be another video about that in the pipeline. Stayed tuned...

That's two so far. I had heard Canon's sales were down, but...

Who said "only" This is just a story about one person that decided to.

I have one and love it as much as my 5d mark iv, maybe more.

You beat me to it! I remember in the '80's a report came out that a man was mugged in NYC every 13 seconds. So Saturday Night Live did a piece showing The Man: walking down the street and getting mugged every 13 seconds. Classic. :)

Great detective work, tracking down that ONE PHOTOGRAPHER.

LOL, Thousands of professionals use it and love it. You a Sony phony?

Actually I don't shoot either brand.

And all reviewers reviewed THE camera or?
I bought one too :-)

I would have bought it if it had dual cards and was priced at $2,000 or less.

Hot Damn! That snowy walking b-roll is sexy as hell! That dude is not into himself at all.

I purchased it too this week, sold my DSLRs (6D and 6Dii). I shoot MF lenses most of the time, and I fully enjoy the EVF. Finally my ageing eyes are able to see sharp focus in the viewfinder, my shoulder loves the reduced weight and coming from my older Canon bodies the sensor is better than what I had before. Of course, one can always ask for more, but why should one?

Here’s another 4 to add to the tally. Fantastic camera, and more importantly, fantastic system. 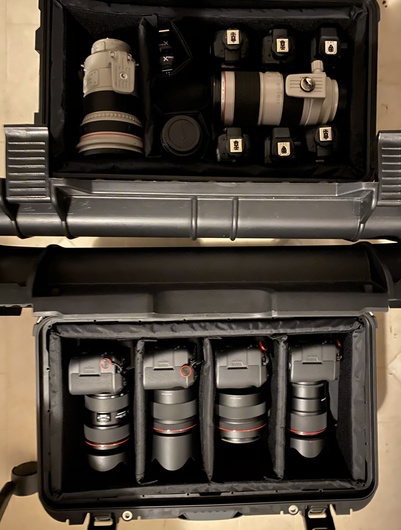 Im the ONLY photographer who bought 2 of them

Thanks for this -- I am reconsidering the EOS R because of that new RF 70-200mm. Rumor has it the EOS R Mark II may come out in the spring, so hopefully it is a good one.

What a joke...
Well done tracking down the hater turned lover when there are plenty who saw through the negative BS to buy one. Single card slot... Get over it. Cards are cheap. Carry a few and shoot important work with a brand new formatted one each time. I shoot with mine 90% of the time or tether to your phine/tablet and bounce the highly editable jpegs if the sh1t hits the fan. It's faster for what I do compared to my 5d4 and has log as standard + the 35mm RF + a variable ND filter is a dream to work with for HD Film. The new firmware upgrade is a big step for film with the eye af. Maybe do a review with someone who's been sending it with this fantastic camera for a year. 🙄🤔

Not to mention EF-S lenses as well. Works excellent. Love my Eos R.

Brilliant camera. I love everything about it except for two things. One, when shooting sports, there is a small lag when you put the camera up to your eye. Two: I miss the joy stick on the back for moving the autofocus point. However, the autofocus system is just amazing, so I will forgive it for everything else. Total bonus is that it works with my 2x Extender with my 100 to 400 EF lens, so I now have an 800mm equivalent lens.