What I Learned From Photographing 35 College Football Tailgates

In the fall of 2010, I decided to shoot my dream assignment. I knew that no one was going to pay me to go out and tackle this subject matter, and I had not seen any photographer do what I wanted to do, so I did it. At the time, I had no idea what the assignment would turn in to or how it would change me as a photographer and a person. Here is what I learned from photographing 35 College Football Tailgates.

For those of you who may be unaware, college football tailgating is an activity that involves millions. Every weekend from September until the end of November fans will descend upon college towns to spend the day eating, drinking, and celebrating their team. Some schools will have over 100,000 fans in attendance on game day. Other school’s stadiums will max out at 2,000. Regardless of size, on game days, college campuses are overrun with fans wearing their school colors and spending anywhere from 4 to 14 hours celebrating their team. I was a college athlete myself and am a HUGE football fan. From my work as a food photographer, you can probably also tell that I enjoy food! A college football tailgate combines the best of both worlds. You have amazing food in an environment centered around college sports! This is an environment that I wanted to know more about and experience.  I decided that I would take a photo journalistic approach to the subject and immerse myself in the tailgating lifestyle. I wanted to meet the people who are there for every home game and find out what school has the best tailgating scene, so that is what I did. Over the 2010, 2011, and 2012 seasons I traveled to games in 16 different states experiencing what a game day was like. I sampled many different foods (at LSU I ate seven different kinds of animals), shot a lot of pictures, and developed an understanding of what the tailgating culture was.

Here are three main things I learned from this project that you may be able to apply to launching your own personal project.

1) Don't be afraid to talk to people

When I began the project, I knew that I wanted to explore the world of tailgating, but other that just showing up at the tailgate, I had no idea what else to do. I will never forget that feeling of terror when at my first tailgate in 2010. I had driven 10 hours from Charlotte to Oxford, MS, and was standing in the middle a massive tailgating area called The Grove. After walking around for an hour or so, I sucked it up and decided that instead of being the "strange guy with a camera," I would have to go up and talk to people.  To my surprise, tailgaters were excited to show me their custom painted grill or the story behind their purple and orange school bus that now served as a game day party wagon. With every tailgate I visited, it became easier and easier to strike up a conversation and tell tailgaters about my project. During the 2011 and 2012 tours, I began to run into people who had already heard of my project and food site. They would say, "Oh you are that Taylor guy who did the post on Ole Miss (or any other school)." I would receive emails before attending a school having people invite me to their tailgate. After the first few games, I figured out that I would get more out of each trip if I made connections with tailgating groups before arriving on campus. Using twitter and facebook, I was able to find these groups and connect ahead of time.

It isn't easy going up with a camera and talking to people that you have never met before. If you plan on photographing strangers for your personal project, it is a skill that you will need to develop. I found that once I began a conversation with a stranger, I was able to gain their trust and make better pictures! Also, if you plan on using these images for any commercial purpose, it is very important for you to obtain model releases. If your personal project is one where you need to talk with a model ahead of time then reach out to people! If they see you are passionate about what they do and want to tell their story in a visual form, there is a good chance they will want to work with you. They may even be able to open doors and introduce you to even more subjects in the field you are interested in. 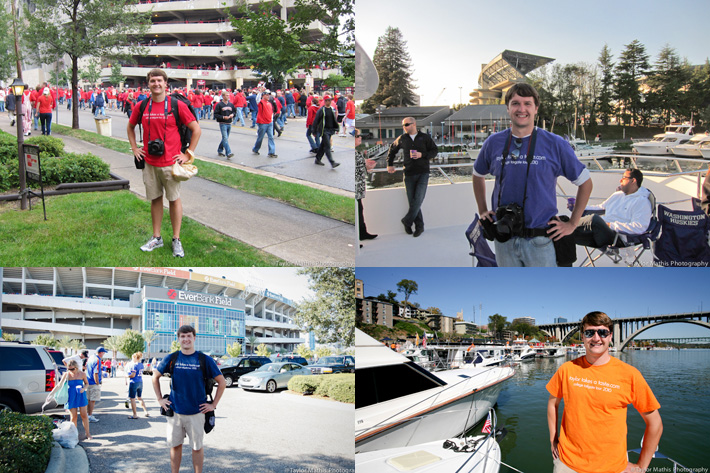 If you are working on a large project over a course of time, blog about it and don't be afraid to share it with people. When attending a game, I would wear a solid colored shirt with the name of my food blog on it where I was posting the project. I would wear a different colored shirt for each home team. I found that dressing in a school's home colors would help me fit in. I also carried around business cards with my websites address and my game schedule printed on it. This made it easy for tailgaters to follow my project.

In the beginning, I had no idea what type of shots I wanted to capture. I knew that I wanted to showcase the best of tailgating, but it wasn't until I was actually at my first tailgate that I had an idea of what that was.  After my first two or three tailgates, I began to notice patterns of what time people will eat, what they would wear and the school traditions I wanted to showcase. I wanted to capture these moments on each campus and showcase the similarities and differences between schools. When tailgating, I would park on one part of campus and spend 8 or more hours on my feet walking around, exploring the tailgating scene. With all this movement, the size and weight of the camera gear I traveled with was a very important factor. I used three lenses throughout the tour and either a Canon 5D MarkII or a Canon 5D to do all the shooting. As the tour progressed, I figured a time and place for each lens. The lenses I traveled with were:

This was my go to lens for the shots that showed the large crowds of people. Seeing thousands of people all in the same color is an awesome site! I found that right before kickoff and during the player walk to the stadium were the perfect times for wide angle shots! 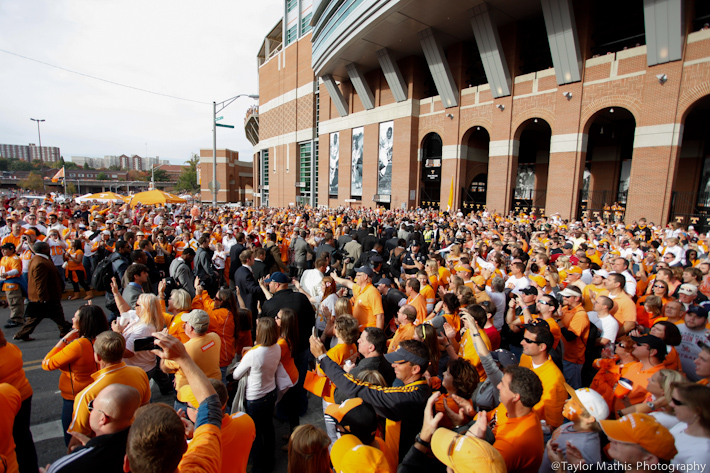 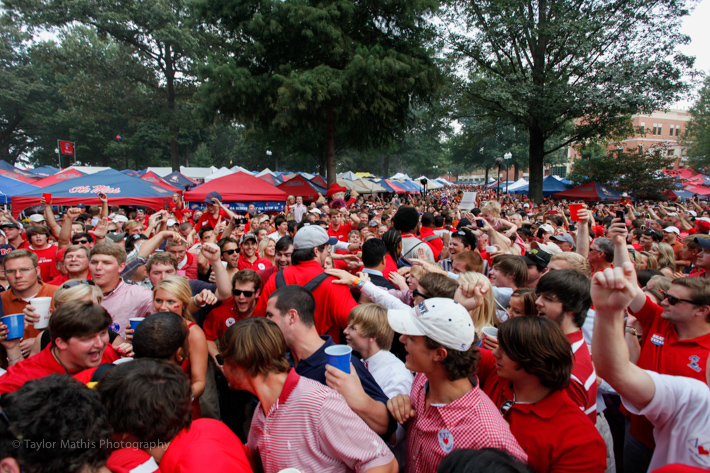 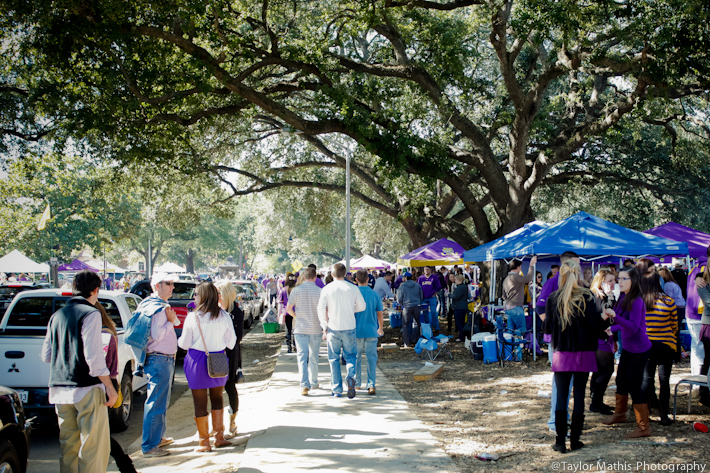 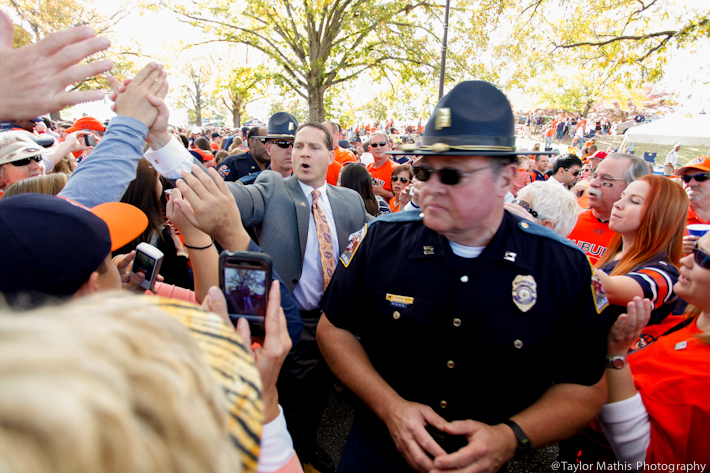 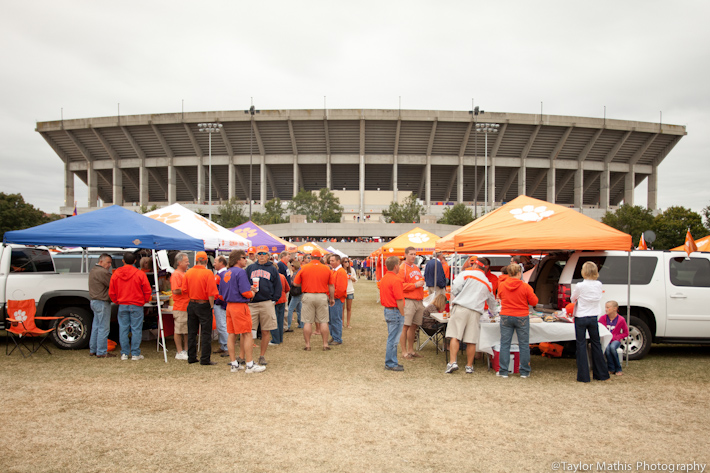 This was the lens that was on my camera the majority of the time. Its small size wasn't intimidating to people and it was great for portraits or action cooking shots.

Here are some people shots taken with the 50mm. 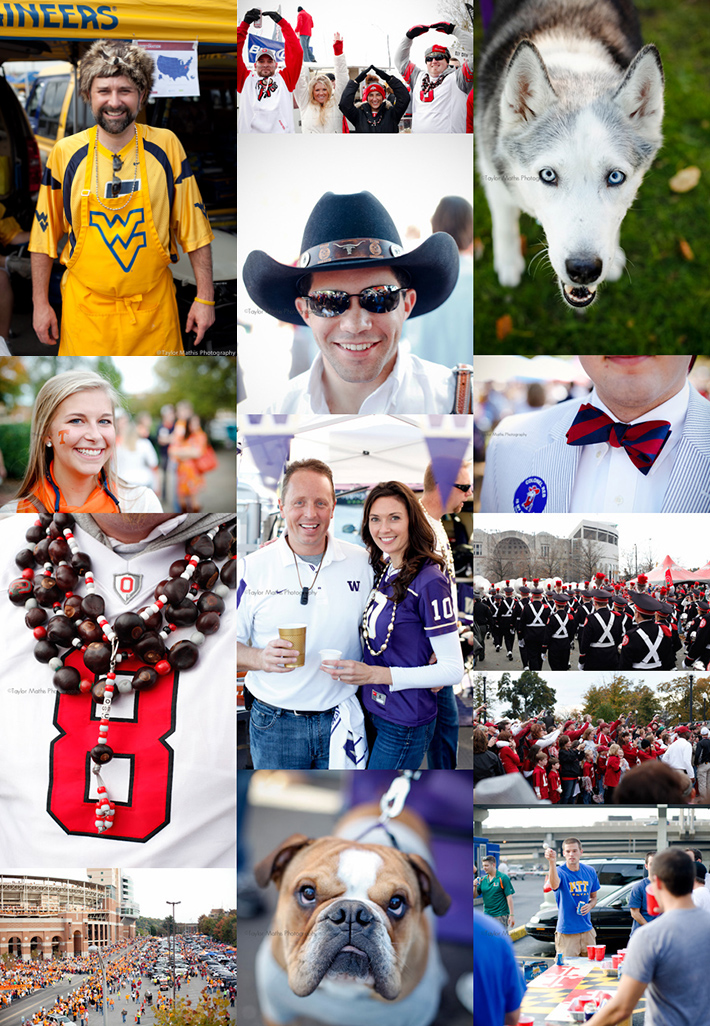 and some food shots 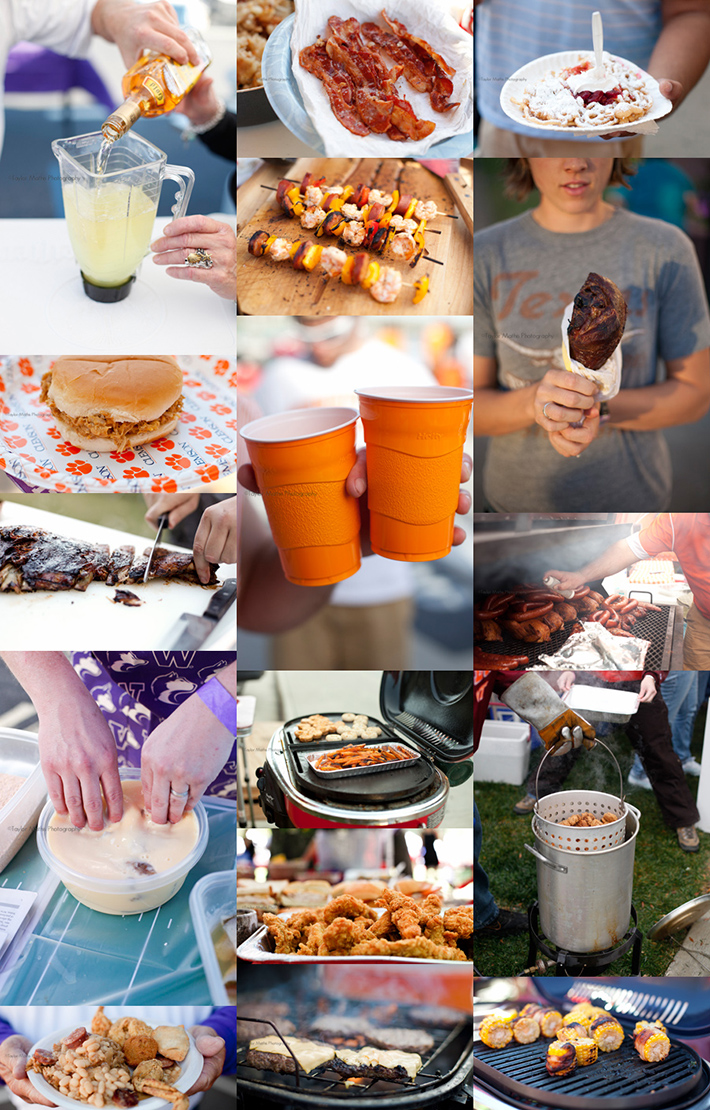 When I had a shot that was focused on food, Macro was the way to go. It is what I use most of the time in my food photography, so I was very comfortable using it for food shots. 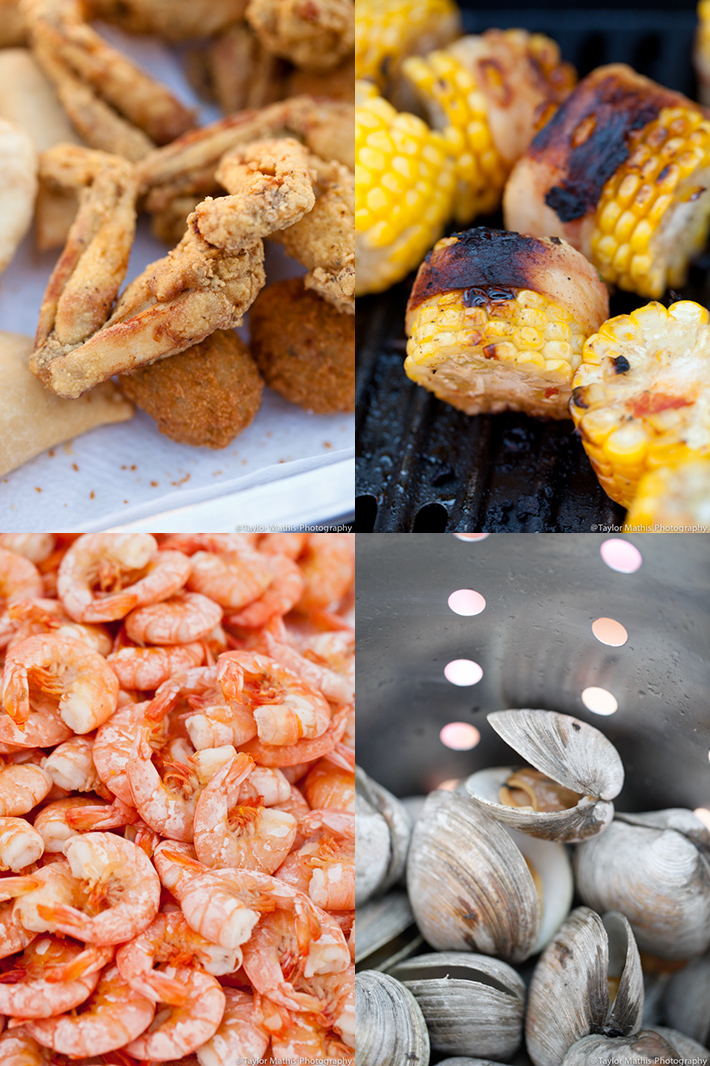 When attempting your personal project think ahead of time about the gear you will need. If you are doing photojournalism based work in an outdoor environment with no assistant, you will probably need to travel lighter. If you plan on having a full team for your shoot, there are other gear needs you may need. If you are scheduling times with a subject, make sure they are aware of what you will need them to wear, what props to bring, and what time they should show up. Planning ahead of time will make sure that you can get the shot you need!

3) Plans will change. Be flexible and work with what you have

You can plan and prepare all you want, but sometimes things will change. Tailgates occur outdoors during the fall. In the southern part of the country this coincides with hurricane season. I had planned for an awesome day of tailgating at Texas A&M, but the remnants of a tropical storm decided to come through. What I was left with was an awesome day of tailgating in the rain! 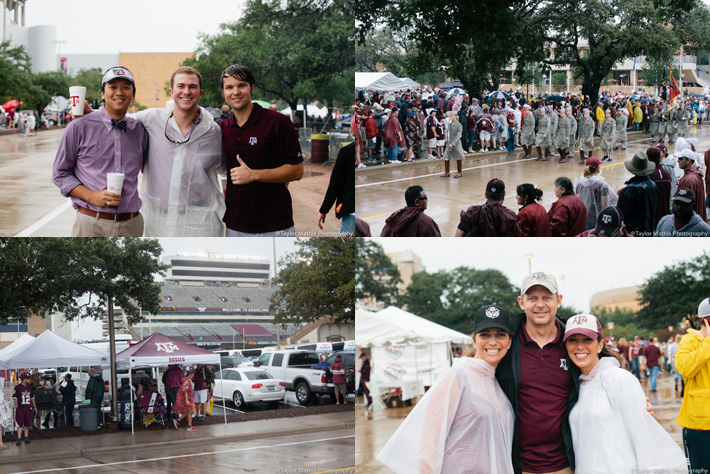 When a kickoff is at noon or 3:30, most of the tailgating action will occur when the sun is directly overhead. This isn't ideal for for taking beautiful pictures of food. If it was an overcast day, I was provided with beautiful soft light all day long. Unfortunately, on most game days I was left with a cloudless sky and plenty of harsh shadows. When I could, I would use the outdoor lighting techniques I talked about a few weeks ago. Fortunately, I discovered that tailgating tents are basically large 10x10 diffusion boxes! 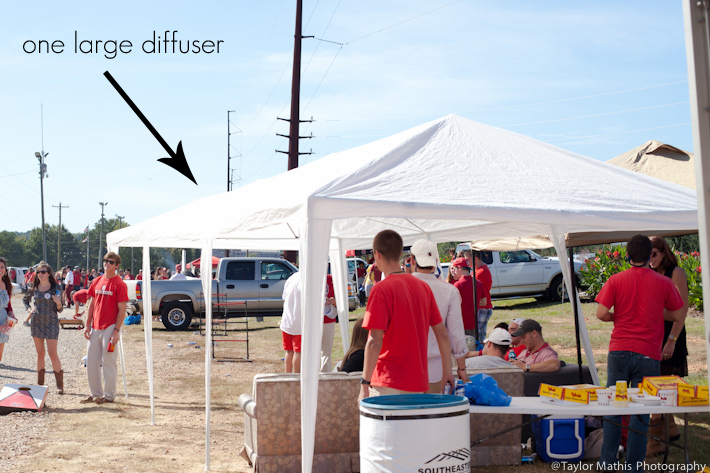 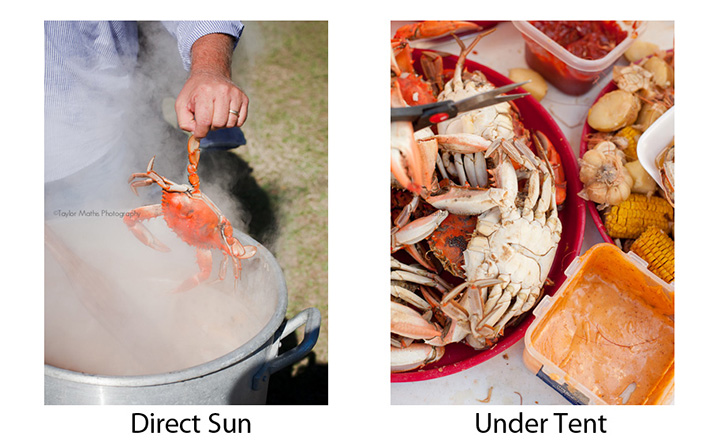 Unfortunately this technique didn't work all the time. Many tents were made in their school's colors (red, purple, orange, blue, etc...) which created a pretty bad color shift. 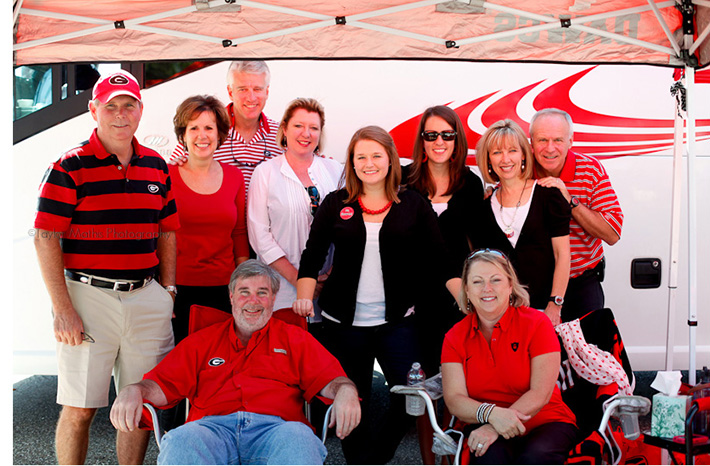 When you are embarking on your personal project there will be some surprises and potential set backs. Don't let these discourage you. Think of how you can turn a potential set back into an opportunity and use it to your advantage!

From this self-assigned personal project, I have gained the confidence to talk with strangers, sharpened my photojournalism skills, and figured out how to create the light that I want wherever I am. The last three years were an experience that I will remember for the rest of my life! If you have a personal project that you have been wanting to take on, I highly suggest you do it! It may not be easy, but if it is a subject that you are passionate about, it will be worth it! There have also been financial rewards from this undertaking. Since I began the project in 2010, I have developed a large stock portfolio of tailgating images that I have sold to various magazines. I have written articles for tailgating publications and today my book, The Southern Tailgating Cookbook: A Game-Day Guide for Lovers of Food, Football, and the South

hits store shelves! If you have undertaken a personal project feel free to share it below!

This is a great project!

:) good job.
SO you had enough of fried chicken and BAR B Q? Or are ya now addicted and cant get enough of it?
:)