Babies and BB Guns: This Photographer Is Under Fire for a Christmas Story Inspired Infant Photo?

According to a recent Yahoo article, Shelbyville, Indiana based photographer Amy Haehl is drawing ire for including a replica gun in a recently released infant photo inspired by the perennial film A Christmas Story.

The photo features some of the most iconic props from the popular holiday film, including glasses, the pink bunny costume, and the leg lamp, but it was the baby-sized wooden gun replica that created the initial controversy. In a Facebook post, Haehl, who runs Coffee Creek Studios, wrote that she'd long wanted to create a photograph inspired by the beloved movie, and that staying true to the movie meant including the object of Ralphie's feverish Christmas desires.

“This photo is not about a baby posed with a 'gun'… it is about love, tradition, family, and happiness,” Haehl wrote on her Facebook page. “['A Christmas Story'] has encouraged smiles, laughter, and happiness for 35 years. It also happened to be filmed right here in the Midwest where I was born and raised."

Not all commenters agreed with Haehl's sentiments, however. According to a Fox News article, the following comments, left on the original Facebook post by unhappy users, have since been deleted.

“Will now unfollow you. Who the hell would take a picture of a baby and a gun just for money. Such a waste since you are so talented. Think hard about your lack of principles.”
“Also unfollowing and unliking you. Extremely distasteful…. Guns are never 'cute', not even as a prop or movie reference. Disgusting. The gun culture in this country is a disgrace.”

Some Yahoo commenters also wondered whether the photo was in good taste considering the current political climate around firearms.

"As a photographer I do not feel that with what is happening today there is any reason to post such a photo. Really did you think before you posted this? Just my opinion of course, but really. 1000 Oaks, Columbine, Parkland, Las Vegas just to name a few. Or maybe you like that 16 YO boy a few years back just want us to feel more comfortable around guns?"

After searching through comments sections on the news articles and original post, though, most comments seem to be highly supportive and encouraging. Even Haehl herself said, in her Facebook statement, "other than a few negative comments which is to be expected, there has been an overwhelmingly positive response to this photo and loved by many." 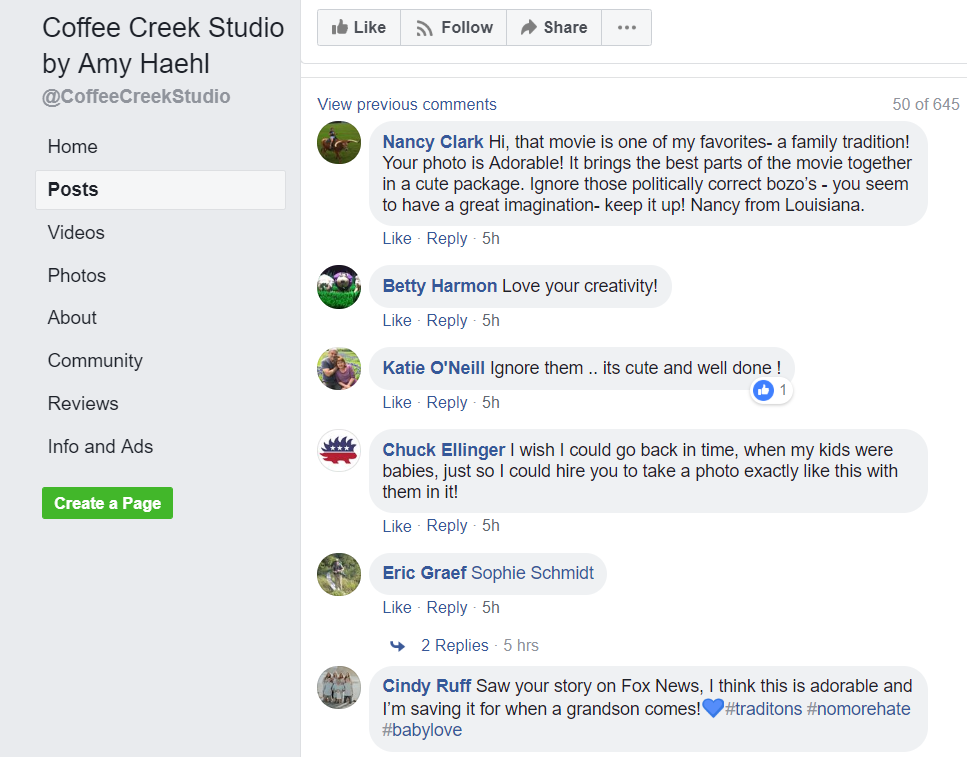 One wonders whether a few negative comments were worthy of the original article, and if articles of this kind are being written merely to create and take advantage of online knee-jerk outrage. What will this trend mean for photographers in the future, when a few negative comments can spawn several articles on large media outlets looking to take advantage of potential outrage? In this instance, it looks like a talented photographer is benefiting from the coverage and receiving loads of support, but how will such a trend affect photographers in the future? Will we see efforts at causing controversy merely for the potential press, or will photographers hold back from sharing images in fear of online reprisals?

Do you think the content of the photograph deserves critique? Do photographers have a responsibility to tip-toe around emotionally charged issues, or is our first duty to our own creative impulses whether it offends others or not? Sound off below.

He is informing you that there is no point for you to respond to his comments. Isn't that obvious? Why do you persist?

Sorry, just trying to help. I didn't realise my comment would upset you so much.

Intolerant - what a load of dribble and absolute hypocrisy. I stand by my comment and you're only digging your hole deeper with every reply you make. Good luck for the future!

Why does he persist? Because he’s like herpes: one you think you’re clear, he pops up again!

We know. It's a bunch of people who like to play "Operator AF" dress-up and live in the fantasy that there's ever going to a be infantry-based ground war in America where their small arms will be the deciding factor.

You're probably right on a large scale but a small arm could decide who dies in a one-on-one encounter with a soldier of an oppressive government or a rogue law enforcement officer.

As weapons become more sophisticated, that outcome becomes increasingly improbable. Not impossible, but I wouldn't bet the farm on it.

We've been at war in Afghanistan for how many years? Small arms and gorilla warfare is a powerful combination.

I was referring more to Rob's scenario in the U.S. but, yeah, point taken.

That's mostly because we're not really into filling caves with poisonous gas or leveling entire cities of civilians along with enemy fighters as such tactics would generally be frowned on. Small arms and guerrilla warfare are only useful against an enemy who is waging the type of limited warfare that we are engaging in over there.

Also note that even those fighters are using RPG's, fully automatic assault rifles, and heavy explosives—not hand guns or weaponry that you would be legally allowed to own in this country anyway. The 2nd Amendment is obsolete in regard to providing you any real ability to protect yourself from a tyrannical government. I don't think our Founding Fathers even dreamed of the scale of destructive capabilities that are available to governments today.

...or you took up arms to prevent its seizure.

Extremely unlikely either would go into a hostile situation alone. Even if they did, they'd have trained rigorously for exactly that type of scenario.

I'm rarely able to choose the situations I find myself in.

Exactly. Firearms for civilian self-defense are only useful in an extremely limited situation where you're ambushed, and yet still manage to get the upper-hand without having the tactical advantage. You introduce far more danger to your household than you protect against with a firearm. Not just physical danger, but also financial danger.

Your final two sentences are very situational. Having said that, I don't even own a gun but have no problem with anyone else having one/some.

You should care because you are asked to sacrifice for other peoples choices. Spend a day taking note every time you see that something has occurred or has been changed because someone "might have a gun." You might be surprised how much gun ownership affects your life even if you've never owned a gun.

There are only so many moments in one's life and I don't have that many left in mine. Like everyone, I have to choose what to spend those moments caring about and, I'm sorry, guns didn't make the cut. :-/

Just last night nailed one coyote and drove off five others trying to lure our dogs from the barnyard. Shot a skunk as well before it got into the barn.
Firearms have their uses.

You're right William. The French Resistance was vital in helping Allied forces. Hell Afghanistan has been fighting off Russia and other occupying forces for decades and with small arms before other countries supplied them with heavy arms and equipment.

If you want to ignore the staggering amount of technological advances in war-fighting and hold up the French Resistance in WWII and the Mujaheddin as your success stories, well that's special. Why leave out Ruby Ridge or Waco while you're at it?

What pray tell do you have in your closet that can stop prevent a drone strike at 10,000 feet?

Let me just agree with you for once, 2A should cover modern arms.

WMD: A recording of Yoko Ono and loud speakers! :-)

Do you know what is the difference in useage between regular weapon and nuclear weapon?

You said modern arms. So I take it you do people in some limits then?

That answer is within the answer of my question.

That has nothing to do with it at all. The 2A says nothing about usage. It also does not specifically define "arms." Different court cases have tried to do that throughout the years with varying success. So I say again, you sound like you support some reasonable limits on what weapons civilians should own. I applaud your rather outlook on this issue.

Rob here in America. Civilian companies build the drones and bombs including the software not the government. Not to mention you need someone to control those drones aka a pilot I'm sure that it wouldn't be just one sided.

Ruby Ridge ATF/FBI running a illegal sting that surround a family that was barely armed. Then shot is wife with a sniper rifle and his kid in the back not exactly an armed resistance. That is an ambush.

Waco - ATF/FBI used and armored truck ram a building and deploying a incendiary grenade burning everyone inside again an ambush.

Then you take into account how many Military would side with the people and they would have the same Tank, Planes and Weapons.

But nope people always think it would be just the government having all the tools.