There seems to be endless lawsuits between celebrities and photographers at the moment. Most rulings seems to fall in the photographer’s favor, however, model Gigi Hadid is challenging the case against her by claiming the image was “fair use” because she contributed to it by smiling.

Xclusive-Lee, Inc. filed a suit against her after the 24-year-old model posted a photo of herself on Instagram which they own the rights to. Now, Hadid has asked the court to throw the case out.

Her defense is that she didn’t in fact violate the copyright of the photographer due to the fact she “posed for the camera and thus herself contributed many of the elements that the copyright law seeks to protect.” She believes her actions make her co-author of the photo, and thus, she has a legal right to use it however she wishes. What’s more, she is claiming that her crop of the image when posting it online means she contributed to the image – her contribution being that the tighter crop meant her followers would be more likely to focus on her smile, rather than anything the composition the photographer’s original crop directed attention to. 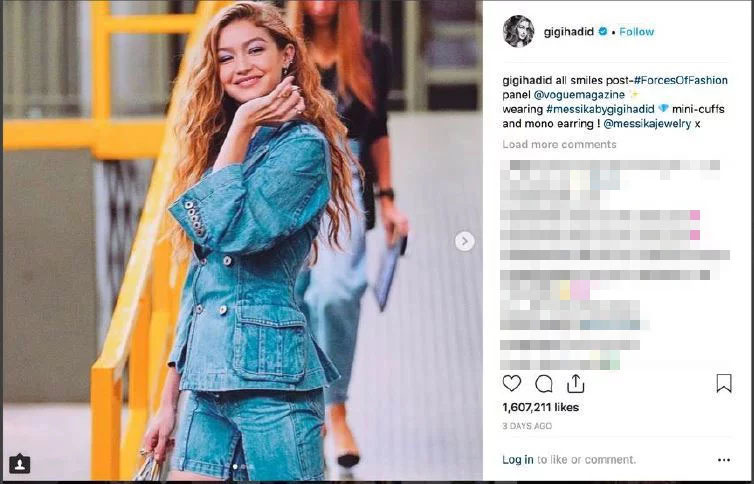 The image at the centre of the court case.

Xclusive have now hit back, dry attention to the four principal factors that determine fair use, claiming Hadid failed to meet all of them. They rubbished her co-author claims as “preposterous”, saying “[She can’t take credit] just because she noticed the photographer and smiled at the moment the photographer chose to snap the shutter.” is preposterous.”

But the agency didn’t stop there. They also criticized her knowledge of copyrights and how they work:

“If Hadid’s approach to the issue of an implied license were adopted, the copyrights of the majority of the world’s authors would be obliterated because the only requirement for an implied license would be for the subject of a work of original art would be to claim (not very convincingly) that she winked, smiled, nodded, or otherwise communicated her acceptance to the author.”

Xclusive are calling for the motion to dismiss, and allow the copyright infringement case to move forward. The case continues.

Its a Sue Me World. The only interest anyone ever has is if there is a buck to be made. Otherwise, it would never matter.

Money is the international language.
Usually a lawsuit is attempt to "right a wrong" if she stole the photographer's camera, she could give it back. but since she took his "intellectual property" the bell has been rung and money is the most reasonable solution. She already posted it with all of her valuable hashtags who pay for exposure but did not # the photog.

I have not sued anyone for using my photos without proper permission (Federal courts hear copyright cases I couldn't not afford that) but have billed infringers for multiple the going rate.

Not to mention, she put links on the post to the actual pieces in her store. Thus she flat out monetized her use of that image, therefore destroying any fair use claim she might have made. Basically she should come out and say what she really means, that she owns the copyright, which hopefully would put her out of business as no self respecting photographer would work with her again, unless the pay is right.

The thing I do not agree with is; If you took a photo of me without my permission, why is it OK for you to use and profit from it but it's not OK for me.

I ABSOLUTELY agree that when a celebrity uses a photo she/he should give full credit to the photographer in terms of hashtags, link to his/her site, etc. That's fair. But not being able to use it completely is, in my opinion, not right.

In the end, the one who benefits the most is the lawyer. I am amazed at how many (especially in the US) cannot just settle things with a single phone call.

I shoot pets and I don't mind when my clients post my works online if they credit me. I mind very much when they don't or crop out/remove/blur my signature or try selling them on photo stocks.

Yes, I am with you on that.

The photo can be use for editorial use. Anything else, they need to get a release.

You mean the photographer, the subject or both?

And that's where I think there is a problem. The photographer can benefit from the photo (money and credit) even though it was taken without the subject's permission, but the person who was photographed cannot.

The law is wrong in my opinion.

I can understand not pushing third-party promotion but the subject should be able to benefit as well as the person who took the photo. Those are people, not items, we photograph. Make it a law that you have to credit the photographer.

Anyway, I personally never ever had any respect for paparazzi.

You can sue anyone you want that doesn't mean, there will be a settlement paid out, and once that happens that is NEWS this is nothing more than "hype".

I can't believe these situations keep popping up! Don't celebrities ever pay attention to what happens or does the settlement cost them less than a PR campaign with the same amount of exposure?

I think if they're that worried about it, they should invest into underground tunnels The Boring Company makes. lol

They know 99.9% of photographers don't have a pot to p*ss in. They can go the distance in court and barely miss the money even if they lose.

It doesn’t even hit the celebrity’s radar in most cases I imagine. They just don’t care so let their management deal with it.

Which raises the question of why these articles are written as if she personally is representing herself in court...

Because she's actually personally responding about it on her social media platforms. Since she's personally talking about it and defending her actions, the articles are written appropriately.

As I stated below, she's actually whining about this on her IG feed. Thus it is on her radar.

or it is just as likely that her management handles all her IG posts as well.

If the title didn't state what she did, I'd not have a Scooby-do who she was.
Sometimes it's great to be ignorant to the world of celebrity.

though I realise that could be a generation gap (or two) showing itself.

I think you could be right there. Although I like to think I keep up to speed with what's important.

Celebrities are pretty high on my list of things that are unimportant at the most fundamental level.

I have no idea who she even is either. Looks like she is just trying to become relevant because I have seen this "article" about 3x on social media

Either she is too cheap to hire a good lawyer or her not-so-good lawyer gave her the terrible advice to use the excuse that you stole the photo, because you smiled and therefor you can steal it!

yeah, crappy lawyers. but worse - are the paparazzi photographers who do this just fo this... so to sue later for it. she used your photo to promote herself? and why you were there shooting? lol

She can believe whatever she wants. Doesn't make it true in a court of law.

Wow...this "model is looking for a quick exit out of the industry. She is the subject not the author. Ridiculous .

We should all stop talking about her and giving her exposure.

The only ones winning in the Sue for everything world is the lawyers. Lawyers just want to make everything last for as long as possible that way they get more money.