German Chancellor Angela Merkel’s Instagram account is not one you’d normally associate with a viral photo, but these are strange times we’re living in.

Normally, a photo of talking heads at a meeting is about as boring as it gets. The key, as every photojournalist assigned to cover one of these knows, is to watch for interesting facial expressions and body language. In that regard, official German Government Photographer Jesco Denzel did an amazing job capturing the sentiments of the officials involved in the G7 summit in Canada. Check out the photo:

The photo’s interpretation could depend on which side you’re on: on one hand, the leaders of six industrialized nations are staring down a seemingly intransigent U.S. president and on the other hand, President Trump could be seen as showing strength in the face of long odds against his recent trade moves.

While the photo posted by the German government was easily the strongest of the bunch, there were a few other interpretations of events. Here’s one from the French President Emmanuel Macron:

And the one from the United States:

A look at negotiations, from behind the scenes at the #G7Charlevoix Summit. pic.twitter.com/2LdJAgt6fE

The other two photos also show how important having a trained photographer is to document events, historic or not. Denzel’s photo was head and shoulders above the others posted, and sadly, most sources didn’t properly credit him (including the U.S. Ambassador John Bolton, who credited Merkel’s spokesperson). You can see more of Denzel’s work here.

What do you think of the photo that was posted by Merkel? What’s your interpretation? Leave your thoughts in the comments below.

It's an excellent photo but I don't think it means anything. Kinda like the photos you see on the cover of tabloids in the supermarket. It is fun to speculate, though. :-)

No need to speculate, Trump cutting ties with everyone. Comes late, eats the food, leaves early, contribute nothing.

The photo with Angela Merkel hovering above him while he is sitting with his arms crossed is a good one. Looks like a governess scolding a spoiled little child.

His demeanor says it all about his insecurities. He cannot conduct a regular conversation, he talks and never listen. Even in this photo he is dying to get up and leave. Then again, can't blame him, must be hard for him. He probably does not get half of what is happening around him :-).

Good job with this photo.

"... there are many working 'professionals' who would have no issue changing and skewing facts as a result of their ideology. "

This professional does not have to :-). In fact, it would be impossible to make it any different even if he (the pro) wanted to,. Mr. Trump does a great job being the child.

Whatever you say skippy. :-)

Next time we will send the best you Motti that way our news media will be hard pressed to offer any comments!

Some people have Trump Derangement Syndrome and, in regards to the president, will turn every neutral into a negative and every positive into a negative.

The photos are indeed interesting. Most people do not like abrupt change that cost them money, including heads of state. The photos show that there is change and that Trump is the reason for it.

Change is good but if you believe that his nut maneuvers will cost only those in Canada and Europe, think again.

I absolutely agree regarding the 'Trump Derangement Syndrome'. Although I don't watch TV (I read the news), while Trump was running for presidency a friend suggested that as an alternative method of entertainment I should browse to CNN web site.

He was right. I could not believe how low they would go to belittle him. It was hard to grasp the fact that a news network can actually spend hours, days, weeks, months talking about and belittling one person. I don't have much respect for news network as it is, especially those on the left, but that was a new low.

As a Canadian I don't usually care who runs the US (we have our own problems). Since we have such an integrated economies -and it has been like that long before NAFTA- we always assumed that whatever policies a US president, or a Canadian PM have, our economies will always be part of our relationship.

In the beginning Trump was a breath of fresh air. He was a sharp contrast to the entitled child that runs our country who cares more about his PC socks and state paid family vacations than actually working.

Trump's 'America First' made sense. Every leader should put his/her country first. He also made some good moves and said some smart things. Stopping funds to the UN is one of them.

However, as time passes he started looking more like an insecure insolent child than a smart leader. Making policies is one thing but when a politician stoop to personal insults it's time to tune out.

I wish you Americans all the best with him. Jobs the US lost are not coming back any time soon. Jobs are lost thanks to technology, not trade agreements. if anything, this global village that we live in, this president is so eager to leave, was a huge advantage to the US economy.

As more and more countries lose trust in the American people (and it has been happening rapidly), your economy will get worse.

For example, for most part It was cheaper to buy tech from the US than develop it in house but the attitude the US has shown recently AND the rapid growth of tech in China, Israel, Korea etc.will push countries to either find other sources (China?) or develop it in house.

As Canadians we will certainly feel the latest tariff imposed by the US, after all, the US has been our biggest client. However, the good thing is that we will now get to work and find other partners, something we should have done 20 years ago.

Instead of shipping crude oil and lumber at basement prices down south, we should refine our own crude and finish our own wood and sell at premium to others.

By the way, in my opinion, the photo of Merkel and him sitting is a VERY accurate representation of what was going on.

Now back to photography :-)

Now THIS was the kind of commentary I could have wished for from the start. Well thought out and stated. While I may disagree with some of your conclusions, I applaud your approach! :-)

Very much appreciated, thank you.

oh, it will be the most memed photo in recent history, soon!

Wait for next week photos showing a very surprised Trump at the meeting with Kim.
Actualy, which is the name and which the surname of Kim? Just asking.

It's a pretty powerful photograph. All three together really show that Trump is acting like a petulant child.

Looks to me like their mad because they cant get their way like they could with the previous idiots that some how stayed in office and almost ruined 300 years of the greatest nation on earth. But some times the obvious is hard to see when your not looking!

Lol. You made my day.
There is nothing wrong about being proud of your country. Every body should be, good on you. But you do realise America was founded in 1776, so for the first 60 years the greatest nation on earth was... Great Britain?
Sorry for being so obvious :)

Really great photo. Merkle and Eurocrats begging Trump not to take away their free lunch. Photos also show the Japanese clearly on Trump's side.

Really? I was thinking maybe they're discussing what to have for lunch: McDonalds (Trump) or sauerbraten (Merkle). Abe is holding out for saba shioyaki, which is also one of my favorites! :-D

Its a question of the point of view. Actualy Macron is talkink to don Trump and Merkel is waiting on his answer or reaction. Anyway a perfect journalist picture capturing perfectly a meeting of allies...joking.

They are allies but if they went in with one mind, there'd be no point in meeting. Just a thought.

One President wants to be "part of the club", the other is actually negotiating for those he represents. 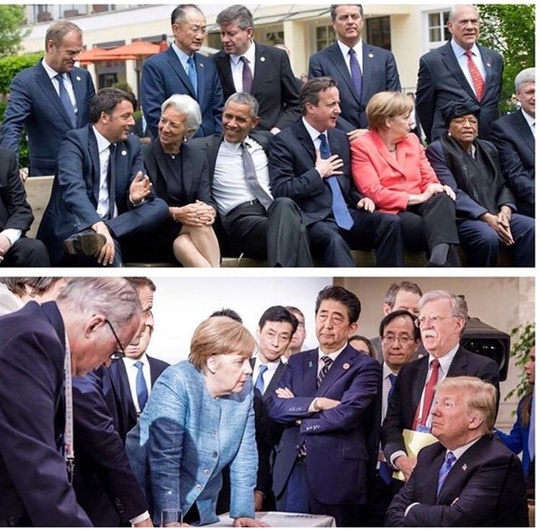 Yeah, sure. He is representing the richest one percent of the USA. He doesn't give a damn about the lower paid people.

you have no foundation for that comment. maybe you are confusing him with the Clinton's

To the uneducated or blind haters of anything democratic, his actions may seem admirable. However, to the rest of the world he is the rude guy that wants to break all ancient relations within the Western part of the world.

He will start a trade war that won't benefit anyone and will result in everybody losing. Plus the fact that a large part of the US manufacturing businesses is non-existent and not really competitive.
Especially in the steel manufacturing business, the USA lacks a lot of know how and doesn't even know how to produce certain kinds of steel anymore. Besides, too many of the steel manufacturing plants have rusted down. Most of the surplus of the cheap steel comes from China.
Trump doesn't dare to attack China because the humongous debt they have. That 1,19 trillion dollars debt of the 6,29 trillions dollars in debt held by other foreign countries.
https://www.thebalance.com/u-s-debt-to-china-how-much-does-it-own-3306355

The USA has to wake up.

The first thing he did was getting tax cuts for the uberrich.
http://business.financialpost.com/news/economy/ap-fact-check-trumps-midd...

see the websites your pointing too, fake news mate. how about bill clinton raping his intern lowinski ? and what do you know being a dutchman, its not even your country toch ?

"Everybody is ignorant, only on different subjects." Will Rogers

what if,...what if Trump gets it done that the "war" or threat with North korea gets fixed and its over, and what if Trump gets the problems solved with Russia. i bet you that the Clinton supporters still have something against Trump. even if Trump solves world hunger and fixes all the wars in the middle east. even then the liberal clinton supports will hate Trump. and thats exactly what it is, blind hate against Trump. nothing he does and nothing he will do will open their eyes.

if you follow what he does you cant do anything but love him. he is a business man playing the business game. Trump is brilliant in playing that game. and he wins doing it.

In the original Jurassic Park, the T-Rex took out the velociraptors at the end of the movie. That didn't make her a friend of the people. I applaud or criticize people's actions, separate from the qualities that makes me love them more or less (I don't hate anyone). I've always said, if President Obama were my neighbor, I'd probably invite him over for a barbeque but I really didn't want him as my president. So far, Trump is doing a pretty good job (in my opinion) as president. I will not be inviting him over for a barbeque. :-/