German Chancellor Angela Merkel’s Instagram account is not one you’d normally associate with a viral photo, but these are strange times we’re living in.

Normally, a photo of talking heads at a meeting is about as boring as it gets. The key, as every photojournalist assigned to cover one of these knows, is to watch for interesting facial expressions and body language. In that regard, official German Government Photographer Jesco Denzel did an amazing job capturing the sentiments of the officials involved in the G7 summit in Canada. Check out the photo:

The photo’s interpretation could depend on which side you’re on: on one hand, the leaders of six industrialized nations are staring down a seemingly intransigent U.S. president and on the other hand, President Trump could be seen as showing strength in the face of long odds against his recent trade moves.

While the photo posted by the German government was easily the strongest of the bunch, there were a few other interpretations of events. Here’s one from the French President Emmanuel Macron:

And the one from the United States:

A look at negotiations, from behind the scenes at the #G7Charlevoix Summit. pic.twitter.com/2LdJAgt6fE

The other two photos also show how important having a trained photographer is to document events, historic or not. Denzel’s photo was head and shoulders above the others posted, and sadly, most sources didn’t properly credit him (including the U.S. Ambassador John Bolton, who credited Merkel’s spokesperson). You can see more of Denzel’s work here.

What do you think of the photo that was posted by Merkel? What’s your interpretation? Leave your thoughts in the comments below.

if he brings ivanka and melania, im going to invite them over every weekend,.

Oh you figured it all out shame not everyone read those secret reports you mention in your above links on the other hand its good because fairy tales can go viral. Just remember your boss is not your friend and nice guys finish last.

Trump is a hero, he is about to write history. something non of the other world leaders have done and that is sign peace between the two korea's. Trump is such a boss and he no longer accepts the rest of the world using the US for their agenda. gotta lova that man.

"Scott is a people driven person and thrives on the creative energy that comes from working as a team."
"...you can count on Scott to be pleasant, engaging and fun to work with."

Sam give him a break there has to be followers to have leaders and not many people can see the way. I have lots of friends who think there is no deep state, and here are a few others that make sense to those followers...
You are welcome to Islam, Scientology, Humanism, political correctness and Shirley McClain. You can also have the UN. but we will no longer be paying the bill.

We'll keep the SUV's, pickup trucks and oversized luxury cars. You can take every Volt and Leaf you
can find.

You can give everyone health care if you can find any practicing doctors.

We'll keep "The Battle Hymn of the Republic" and "The National Anthem."

We'll practice trickle-down economics and you can continue to give trickle up poverty your best shot.

Since it often so offends you, we'll keep our history, our name and our flag.

I'm a Log Cabin Republican and job creator at an abortion clinic who drives a Ford Expedition and listens to John Lennon all the time. Where do I fit in?

Identity politics are silly. These posts are silly. And the national anthem is called "The Star-Spangled Banner" BTW, and the U.S. isn't 300 years old, LOL.

Since we're all photographers with many levels of experience, we know with today's cameras, even my older 5DIII, images can be captured milliseconds apart. We will never see what was captured seconds before or after. It could be that one or both were smiling. All you have to do is view photographs on the different news feeds. You can bet that if, say, FOX News has a photographer standing right next to a photographer from MSNBC, both shooting Nikon D5s, the images that are published will have been cherry picked from the hundreds of shots. The choices will be, Trump looks presidential, or Trump looks like a moron.

Of course, we have our own thought processes as proven by the replies here. Some are restrained and cordial, others, not so much. I wear my Libertarianism on my sleeve, so I disagree with Liberals AND Conservatives. I could easily make enemies of most of you. :-) 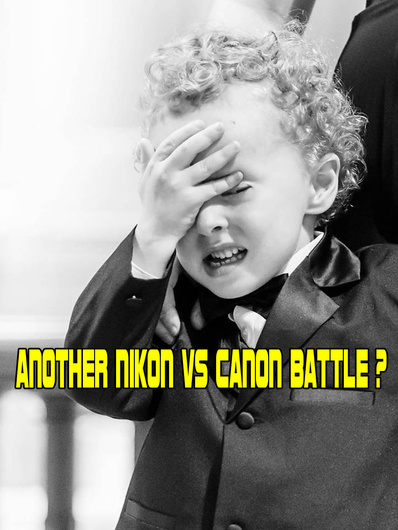 i remember canon, they made printers didnt they ?

Yes they did and that's why I won't buy anything made by them. About 20+ years ago, I moonlighted at BestBuy in their PC repair department. We got back more Canon printers than all other manufacturers combined!

That was a long time ago! I was turned off to pro-grade inkjets by some bad experiences with Epson printers 10-15 years ago, but times have really changed. I took the plunge and bought a Canon Pixma Pro-10 and it changed my mind about professional printing at home.

Agreed. But when forced to decide between competing products, barring any obvious advantage of one over the other, any bias will serve. This is mine.

Meanwhile Merkel is letting her own country fall to infiltrators. Trump is trying to even the playing field, why are import taxes on American goods so high in our Allied countries?

all terrorists are welcome, i mean refugees,. there are so many murders, terror attacks etc it doesn't even hit the news anymore. same goes for every other European country. even the EU admits it got out of control. next decade the war in the middle east is shifting to the EU and it has already begun.

I was just talking to a co-worker of mine that's from Germany originally, he said he goes home every year to visit his family and he can see it degrading more an more each time he visits.

The news covers that stuff up so they aren't painted as the bad guys, they want to be "accepting" of all cultures. Turn a blind eye and it will eventually go away right? Of course our boys (and girls) will eventually have to go in and clean that hellacious mess up to help our weak allied leaders regain control of their countries.

"All photographs are accurate. None of them is the truth." -Richard Avedon

This entire comment section is a total train wreck. Grab your popcorn.

Reminds me a lot of this very famous photo from the civil rights era. At face value, it looks horrible. But if you actually study what was going on at the time, you realize the photo doesn't quite represent what many "want it to". Still very powerful, but you need more than a photograph to interpret what's actually going on.

Here's the wikipedia page of the photographer showing his iconic image: https://bit.ly/2mEi5rb

Heinrich Hoffmann could not have made a better photo.

Who posed them? They look like bowling pins waiting for a hit.