It doesn't get much closer than this. Tragedy was narrowly avoided this past week when a photographer got so close to a passing train that it tore a hole in her coat as it sped by.

As the video shows at about the 53-second mark, the photographer's coat was ripped open as the train sped past her. Another inch or two closer would have spelled disaster.

We are very fortunate to have the legendary Pere Marquette 1225 steam locomotive here in Shiawassee County. This...

From studying the video and watching the photographer's reaction when she lowers her camera, I believe the main cause of this (beyond just being too close) was that she was probably using a wide-angle lens and did not realize that the train was as close as it was. She only moved out of the way when the train was just about 10 feet from her. That's less than a second from death. 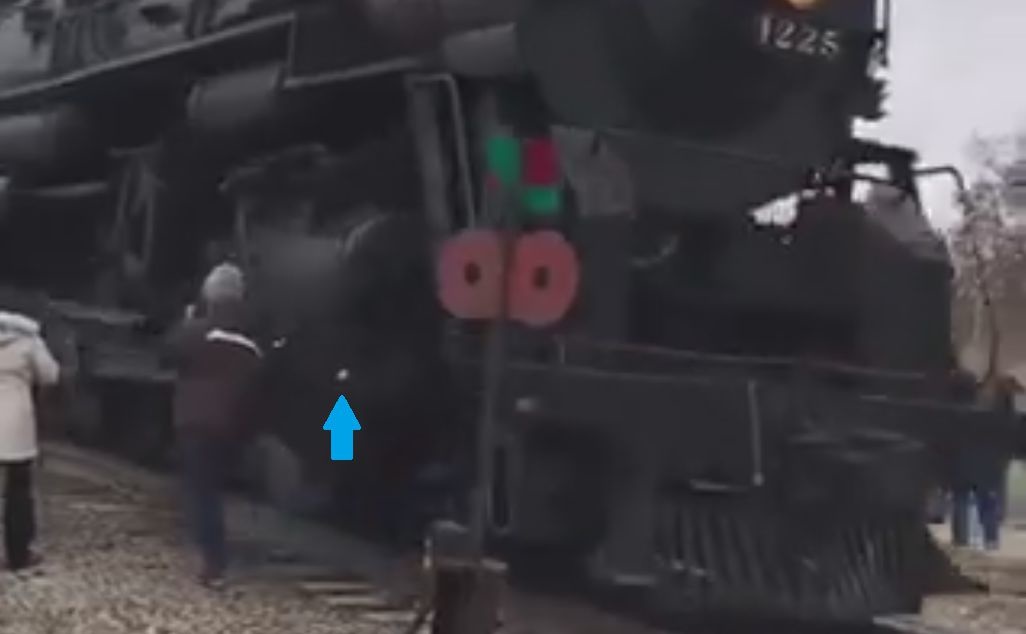 In the video, you can see insulation ripped from the photographer's coat floating to the ground

I've previously photographed this train (see my lead image, taken at over 450 feet away at 188mm) and know the area reasonably well. This train normally travels at about 55 mph as it passes by the Carland Elevator and crosses the road. As with all trains, their large size makes their perceived speed tricky to guess, especially when looking through a viewfinder and when it is coming straight at you.

As seen in the video, she is actually standing on the railroad tie as the train approaches. Trains overhang the tracks by about 3 feet on each side. Shiawassee County Sheriff Brian BeGole reminds everyone that "...standing in the railroad right of way outside of a designated crossing is considered criminal trespassing."

If you aren't already aware, stay alive, and stay off the tracks!

She is lucky she didn't end up in a body bag. Seems like common sense is rapidly declining across all spectrums of society.

You cannot fix stupid, she was a fraction of an inch from being hit, cut or dragged to her death.

If you stand in front of a train and watch it come towards you, and it then hits you, perhaps you shouldn't be in the gene pool.

"Another inch or two closer would have spelled disaster."

Another inch or two closer would have spelled natural selection.

She was smart enough to know precisely how close she could get without getting killed. You're all saying how stupid she was, to me she seems rather brilliant, to be able to calculate that so precisely.

That wasn't intelligence, that was dumb luck, unless you think she has other jackets at home with rips in the sleeve. Nope, still stupidity.

I know who NOT to hire for my next factory corporate shooting. This kind of people put everyone life at risk with such behavior.

Did she put anyone's life at risk besides her own?

Perhaps not, but she would have left the train crew with the life long knowledge that their train killed her.

Suicide by Train is pretty common where I live (unintended cnsequence of strict gun control laws, I suppose) and I was on a Strassenbahn that someone decided to stand in front of. Takes a while for those things to stop, and I watched personell escort the driver from the cockpit after the incident. She was pale as a sheet, shaking, and pretty much destroyed. So yeah, Ben's comment is a legit concern.

A human body flung at 55mph can easily kill someone else.

But if she got hit by a train going 55 mph, her body WOULDN'T get "flung at 55 mph". That's not how physics work. Surprised you don't know that.

The exact speed doesn't matter. Her body can hit and hurt or even kill someone else. Just admit you didn't think about that when you made your comment about her not putting anyone's life at risk.

Adriano, there is ZERO CHANCE of a body that gets hit by a fast train getting "flung through the air" OR "flung along the ground". It is preposterous that you think that is what happens when a body gets hit by a fast-moving, massive object. I have worked in the body recovery and removal industry for many many years and have recovered bodies from all sorts of tragic accidents, and have quite a bit of knowledge and personal experience when it comes to what happens when pedestrians get killed at high speed. You, on the other hand, seem to base your predictions on what you think up and imagine in your mind, or by what you have seen in the movies. Silly layperson stuff.

I never said "flung THROUGH THE AIR". Thanks for the strawman fallacy...
Bodies *can* be flung along the ground and hit other people. There you go, silly pseudo-expert: https://gfycat.com/grimyliquiddotterel

Tom Reichner - I personally witnessed a man standing in front of a train to commit suicide. It happened in 2006, not 75 feet away from and in front of me. I was in a favorite railfanning location with 5 other people and we were all enjoying the evening watching trains pass by. After 10 pm. a very intoxicated man came along to where we were gathered watching trains, and it happened that a Norfolk Southern intermodal train from Los Angeles, CA to Newport News, VA (train I.D. was N63 at the time) with a BNSF Warbonnet (Still in the Santa Fe scheme) on the lead was approaching our viewing location.

This intoxicated man unexpectedly walked up onto the tracks in front of this intermodal train, and I personally witnessed his death. You say: "...there is ZERO CHANCE of a body that gets hit by a fast train getting "flung through the air"..." I can personally say that YOU are WRONG!!

The train - N63 - was traveling at 55 mph at the time and this intoxicated man was hit square in the face by the Engineer's side ditch-light. Believe me, his body lifted straight into the air, then bent sideways around the side of the cab, and hit the side of the cab just below the Engineer's window, at the height of the cab-side numbers. His face bounced off the side of the locomotive and his body literally flew through the air about 20 feet off the ground, and about 30 feet forward from the train before actually BOUNCING off the ballast, flung into the air another 5 feet off the ground, and then landed, bounced again about 2 feet off the pavement, and finally landed and then skidded to a stop 60 - 80 feet from where he was impacted.

If you don't believe me, I have the newspaper article reporting his death still in my wallet, laminated and I carry it with me every day to warn people about the dangers around railroad property, and what can happen when a body is hit by a fast-moving train.

So when you say that there is ZERO CHANCE of a body getting flung through the air - you are lying and are totally wrong - I witnessed that very thing happen in 2006 when I witnessed a suicide by train. The NS Police officer who took the report was a very good friend of mine that I had worked with before as a Security Officer for a bank. She has a copy of the report to this day on file in the NS Police office available if you need proof of this incident happening.

YES - a body CAN fly through the air when struck by a train at a high rate of speed. This guy got at least a good 20 feet off the ground, and flew about 30 feet before BOUNCING off the ballast, and then got another 5 feet of "air-time" before bouncing again at about 2 feet off the ground, and landing and skidding to a stop 60 - 80 feet away from where he was hit.

This incident haunts me to this day, and I still can't shake that "film" of what I witnessed from my memory. That incident is ingrained in my brain for the rest of my life. And I can assure you, a body CAN fly through the air.

I'm sorry that you misremember the details of the incident so poorly.

Tom Reichner - I don't "misremember" anything! I merely clarified my description - when I reread it, it read to me as if it was only his face that bounced off the side of the locomotive and only his face flew through the air...I can clearly remember everything that happened that night, as well as the other 4 people who were with me. One of my friends who was with me that night doesn't go railfanning anymore because of it! And as far as the train I.D. - NS has changed their system so many times, I have no clue what the train I.D. is now.

Tom, take a chill pill. Don't know this with certainty but I would imagine many people, if not most, have no idea as to what happens to someone being hit by a train or car at speed. Most of us will never witness that type of event.

Yoikes. She's not the only dummy there, most of the folks in that video are too darned close.

I really like the lead image to this article. Terrific pic, shot safely. I bet the image shot by the insane lady in the video was not a patch on it.

At least she wasn't attempting to take a selfie.

Wait till next time

I've photographed that train from a distance with a telephoto lens. That gravel on either side of the track-if you are on it, you are too close to the track. Also, all these people lined up here are standing on private property-the rail company and the grain elevator. Not only are they endangering themselves, they are ruining the experience for anyone else. It won't be long before they ban photographing the train.

No shot no angle is worth loosing your life over.

So it takes a special kind of stupid to run a train bomb with no brakes or steering at a speed faster than the train sight stopping distance (the 101 in defensive driving) but railroads manage to fill the positions. Would they be so brave running the trains duck taped to the train cowcatcher?

The pictures of the trespassing signs and fencing GIVENS are?

Now the question would be NO PASSENGERS on the crossing inventory and why a 2 train a day needs to have 40 mph train speeds with open tracks 23 hours 40 minutes a day.

Are you serious? So you don't cross the highway because you know better there are cars speeding at 80 miles per hour there but you have beef with railroads because they run a train thru some village at 40 m/h? the video is a clear display of idiocy on behalf of one person. Everyone else somehow know to stay the hell away from the tracks.
And what steering are you talking about anyway? It's a train dude - it goes ALONG the rails. No steering is involved.

You do realize trains measure stopping distance ability in miles.