From the weird to the stunningly impressive, here are 10 mind-blowing facts about photography.

1. The 900-Pound Camera That Only Took One Photo

This insane camera was part of a publicity stunt in 1900 by the Chicago & Alton Railway to photograph the Alton Limited locomotive. The 900 lbs. camera traveled six miles by rail car, then was carried a quarter-mile into a field by 15 men. Photographer George Lawrence (famous for his post-1906 earthquake photo of San Francisco) then took the only exposure the camera ever made on an insane 8 x 4.5 ft. glass negative (the same as the track gauge). It might seem like a crazy stunt, but it was actually considered a successful PR move, even though it cost $5,000 (about $161,000 today). Three prints were sent to the 1900 Paris Exposition, where they won the grand prize for photographic excellence.

Yep, it was a thing — and a popular thing at that. Victorian life was not easy in a lot of ways, and death was a common thing — often well before old age. Though it might seem strange or unsettling today, posing the dead with their living family was a common way to create a memory of them. Photographers frequently tried to make the dead look alive through posing or tricks like propping up their bodies in lifelike positions. Though it has fallen out of popularity, the practice still continues in small amounts across the world.

The most expensive (confirmed) price ever paid for a photograph was a whopping $4,338,500 (about $6.84 million today) paid for "Rhein II," an image by Andreas Gursky, in 1999. Gursky digitally removed pedestrians and a factory from the photo, then made a 73 by 143-inch print and mounted it on acrylic glass before framing it. It shows the Lower Rhine flowing across the image, with green fields and a gray sky on either side and was the second in a series of six.

4. There Are 12 Hasselblad Cameras Sitting on the Moon

In spaceflight, every last ounce matters, both for the expense of getting it up there and for the precision math of navigating the craft through space and back to Earth. When astronauts went to the moon, they took lots of Hasselblad cameras with them, which took some of the most iconic photos we know today. When they brought back moon rocks for scientific study, they had to jettison some extra weight, and so, the cameras stayed behind. They brought back the film, of course, however. Surely, if someone somehow brought them back to Earth, they would be some of the most prized cameras on the planet.

5. The First Handheld Digital Camera Was Invented Way Back in 1975

It is hard to believe, but the first handheld digital camera was actually invented almost half a century ago. Kodak engineer Steve Sasson invented the device, which weighed 8 pounds (3.6 kg) and took images at a 100 by 100-pixel resolution. The resulting black and white photo was recorded on a cassette tape (a process which itself took 23 seconds) and could then be displayed on a television. Unbelievably, Kodak then did nothing with the project, afraid that such a camera would cut into their film sales (imagine what a different world this would be had Kodak taken digital seriously back then). Sasson was honored with the National Medal of Technology and Innovation by President Obama in 2009 and has also received honors from the Royal Photographic Society and was inducted into the National Inventors Hall of Fame.

Widely believed to be the most expensive consumer lens ever produced, the Leica (of course) APO-Telyt-R 1,600mm f/5.6 lens only saw one copy ever made. Sheikh Saud Bin Mohammed Al-Thani of Qatar, widely believed to have been the world's largest art collector, commissioned the behemoth lens from Leica in 2006. He also had a custom Mercedes made to transport the 132-pound device. In fairness, Leica or not, a 1,600mm f/5.6 lens, particularly a one-off version, should probably command a stratospheric price. Sadly, there are no known publicly available images taken with the lens.

The most liked image on Instagram is not some celebrity selfie or influencer post. It's an egg. Yup. Just an egg. With over 54.5 million likes and still climbing, the photo was taken by Serghei Platanov in 2015. Advertising creative Chris Godfrey posted it to Instagram with the specific intent of getting the highest number of likes of any post on the platform, and he was wildly successful, beating the next closest post by over 30 million.

Think you have bad Gear Acquisition Syndrome? Say hello to Dilish Parekh, a jewel and government worker from Mumbai. Parekh holds the Guinness world record for the largest camera collection, currently at 4,425. Parekh inherited them from his father and continues to grow it with hopes that he can one day create a museum of cameras from his collection, which includes rare original Leicas, Rolleiflex TLRs, a Canon 7 with the famous f/0.95 "dream lens" and much more.

9. The First Photo of a Person Was an Accident

In 1839, Louis Daguerre (yes, that Daguerre) took an image of the Boulevard du Temple in Paris. Because of the long exposure times of early processes, capturing humans was generally not possible or at least not practical. However, by luck, a man getting his shoes shined and the shoe-shine happened to stay in the same spot throughout the exposure, and as such, they became the first humans ever to appear in an image.

It is easily the most iconic brand in photography, and yet, its name doesn't actually mean anything. Whereas most photographic companies have names that are derived from some sort of background story or inspiration, George Eastman wanted a name that was impossible to pronounce incorrectly, distinctive, and short and punchy. The letter "K" was his favorite, thus its incorporation in the name. 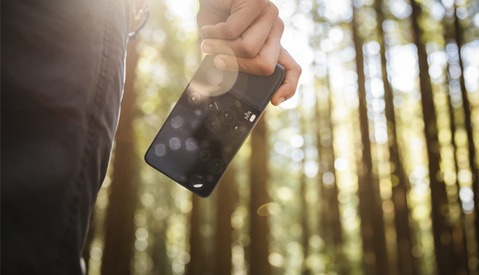 Interesting article.
I looked up #3 and it makes me feel
a) good about my photography
b) sad that amount paid couldn't have been split between 430 photographers

I looked it up too, and it is actually a stunning photo, but worth $4.3 Million!?

Here is some discussion about that.

6.) Unsure whether I'm supposed to be impressed Leica made a 1600mm f5.6 lens, or that a man has so much money he makes up ways to spend it.

Interesting to see how good the optics were then

Many interesting fact , that i had no clue about , beside that kodak was digital camera creator , and died from not actually trying to sell anything

No problem with the subject holding the pose.

That's how to tell which is the deceased in those photos. Because of the exposure time the living weren't as sharp.

#5, would love to see the images taken with it.

8. Worlds largest camera collection? Your kidding, look at this> https://www.collectiecameramuseum.nl/cgi-bin/objecten.pl