Advance Your Travel Photography by Spotting These Cognitive Biases

Your brain is the most sophisticated and irreplaceable piece of equipment you bring to any shoot. But this fantastically complex machine is also littered with mental glitches called cognitive biases.

These deviations from rational behavior come with “just being human,” but the disturbing part is we don’t think they’re irrational since we can explain to ourselves why we think the way we do. That’s exactly why cognitive biases are so insidious: they are natural.

Since everyone is subject to this bias blind spot, it seems trivial. But these biases affect your photography from planning, to packing, to execution: they prevent you from getting better. By recognizing these biases for what they are, you can counter them to improve your travel photography—and every other area of your life.

So stop working against yourself and learn to spot these brain quirks in your own thinking. As Spock would say, “It’s only logical.”

Sunk Cost Fallacy: “Just Make the Best of It”

“Insanity is knowing that what you’re doing is completely idiotic, but still, somehow, you just can’t stop it.” —Elizabeth Wurtzel

The worst of the bunch: the Sunk Cost Fallacy affects every aspect of your life because it is disguised with a tinge of rationality. It was my single greatest obstacle to adopting the digital nomad lifestyle to travel full-time.

Thanks to a phenomenon called Loss Aversion Bias, we prefer to minimize losses over maximizing gains. So when we waste time, money, or effort on a choice, we stick with the bad choice instead of shifting gears—we allow the sunk cost to influence our decisions when it shouldn’t.

If you’ve tried to declutter or sell off some unused camera equipment recently, you probably butted heads with sunk cost. You invested a lot of time and money in these (now unused) things, so it seems like a waste to toss them. But since you can’t recover the cost, holding on to them actually keeps costing you: storage space, smashed toes, moving fees, anxiety, and even opportunities to move to a new place.

That lighting was a bust from the start, so I snapped a few reference shots and left. Later, I came back to incredible light and unbelievable mist!

You may commit to a landscape shoot that you spent a lot of time getting to, but is obviously a bust once you pull up. Instead of resetting your decision-making, it feels better to “shoot what you can” rather than waste all that time spent traveling. But if your goal is to shoot the best photos possible, it would be better to give up and move on to the next spot. By sticking around, you continue to waste time that could be invested in a more promising location!

Don’t let costs that you can’t recoup keep costing you by holding you back from moving to better options.

“Quality is never an accident. It is always the result of intelligent effort.” —John Ruskin

When you start planning your next photography trip, do you intentionally take previous trips into account? No, really—have you measured things like:

Statistically, most of us are too optimistic, and we are unable to correct this bias in retrospect because we rarely document hard data in the field. Even pessimists (like myself) are affected: you may overestimate how bad things could go, and thus pack too much backup equipment.

Before my last trip, I noticed that my best photos were between 24–35mm and used fog to create layering. So I brought one lens and shot when there would be mist.

You will never improve as fast as you’d like if you don’t have goals outlined and measurable results to aim for: data-centered improvement will always help you self-correct faster! So during the trip, try journaling daily about frustrations, techniques tried, and “I wish I had…” moments. Journals are great retrospective data that you can synthesize for planning your next trip.

Try it on a trip—you just might get addicted to measurable improvements in your travel photography!

“It is better to keep your mouth closed and let people think you are a fool than to open it and remove all doubt.” —Mark Twain

Impostor Syndrome is modesty gone south: you acknowledge that others are better than you, but when that turns into excessive self-deprecation, you resist internalizing your own achievements. If you’re afraid of “being found out,” you may unintentionally let others chart your own course to improvement, e.g. you purchase equipment that won’t improve your work, severely undercharge for your services, or resist sharing your experience with peers.

It’s not all bad. Almost everyone experiences impostor syndrome, and the anxiety pushes individuals to work harder. So long as it doesn’t paralyze you with doubt, a little impostor syndrome is healthy—if you don’t have at least some fear of being found out, it’s possible you’ve stagnated in your field. But in the long run, impostor syndrome can lead to burn out and keep you from taking on new growth opportunities.

Observational Selection Bias: “Everyone Has My Camera”

Some biases can be turned into superpowers: with the Observational Selection Bias, your brain begins to notice what you have selected in your mind more frequently.

For example, when you purchase a new camera, you will begin to notice other people with the same camera and think the frequency is higher than usual. Day to day, this bias and its cousin Confirmation Bias can wreak havoc on reasoning, but you can also use this bias to your advantage! After outlining goals for your photography trip, make an effort to select compositional attributes in your mind as you drive: 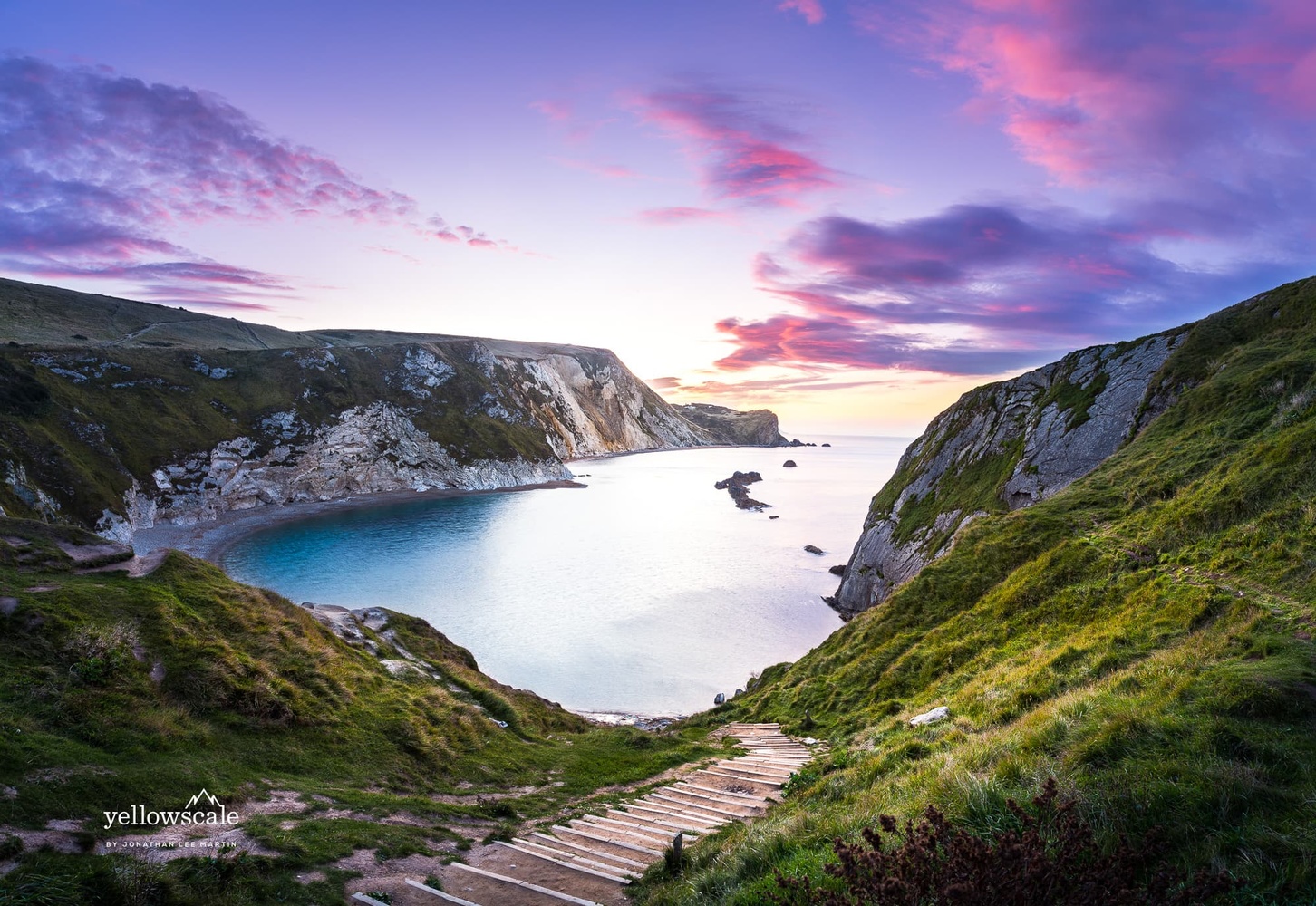 Durdle Door is just to the right, but Man O’ War Beach grabbed my attention because I was looking for repeating curves: this perspective is full of boomerang-shaped curves.

You’re more likely to notice things you’re looking for, so go ahead and binge-watch work by photographers you want to imitate.

Anchoring Effect: “But the Price is Reasonable”

Photographers love expensive gear, so it’s not hard to fall prey to the Anchoring Effect. When you start shopping without a budget in mind, the first few items you land on carry disproportionate weight. From now on, that price becomes your mental anchor: anything less will seem reasonable, and anything more will seem too expensive. When we get caught in this relativity trap, we often purchase things that were way too expensive to begin with.

I recently went shopping for a rain jacket—I was frustrated with my current jacket’s bulkiness and poor breathability, so I decided to invest in a better jacket. Since the first couple results I saw were over $200, that price became my anchor, despite a wealth of options between $50–$100 that I discovered later.

After days of shopping online and in stores, I selected a jacket. Right before purchasing, I realized I was about to spend $200 on something that would be used infrequently. But after investing so much time researching, I had an irrational sense of urgency to make the purchase. My brother helped me break away by asking me:

These questions countered the urgency so I could distance myself long enough to escape the Anchoring Effect. I still wanted to click that buy button, but I’m glad I didn’t—by waiting, I found it on sale a couple weeks later for much less. No need for post-purchase rationalization!

The first step to conquering the Matrix of your own making is to recognize biases in your own reasoning. Most biases are incredibly difficult to introspect, so find a close peer who can help you identify them. With practice, introspection gets easier.

“Once you stop learning, you start dying.” —Albert Einstein

Cognitive biases are a humorous reminder that no one is perfect. But if you practice being a perpetual learner, perfection will cease to be a prerequisite for success! Along the way, you’ll get to enjoy the humor of our imperfect nature.

Landscapes
How to Discover Unique Landscape Photography Spots Before Takeoff

Me too :) I felt like I was preaching at myself the whole time.

Finally created an account on here just to voice my appreciation for this article.

That's so encouraging to hear, Brendan! Welcome (officially) to Fstoppers 🎉

Thanks for the wonderful and enlightening article, Jonathan. It was a real eye-opener for me.
This is exactly the type of thoughtful, insightful, and well-written content that Fstoppers needs more of. I'm looking forward to your next one.

Graham, that is fantastically encouraging, thanks for taking the time to comment! So glad it was helpful—definitely more to come.

Great article! So fun to see these cognitive biases used in a photographic perspective! :)
Must have taken a massive amount of time to write and research!

Thanks Mads! (or Mads Peter? 😄). Hah, less time/research than you'd think since I have firsthand experience from committing most of these! But I didn't realize how it affected my photography until some more recent trips — it was easier to recognize Sunk Cost in terms of "stuff" that I held on to when I was becoming a digital nomad, harder to see in photography.