Are Cameras Just for Men? The Industry Needs to Change

Olympus has produced a beautiful series of videos on YouTube whereby its ambassadors visit some stunning locations, exploring Lapland, Faroe Islands, Iceland, and Namibia. What’s noticeable is that all of the Olympus Xplorers are men.

As an industry, photography has a reputation for being male-dominated, and this is reflected in some of the major manufacturers occasionally forgetting that half of their potential market is in fact female. Just over a year ago, Nikon presented a team of 32 photographers as the face of the Nikon D850, but failed to include a single woman. Unlike its Instagram, this Olympus campaign seems to be of a similar attitude: the Xplorers series on YouTube revolves around the heroic image-making achievements of men. Across the various videos, one or two women have a very brief presence, holding a camera for split second, but otherwise spectating as men discuss maps or light fires, and then posing to be photographed. Ultimately, it reinforces the stereotype that men are active and achieve things, while women are passive and, when included, are there simply to look pretty. 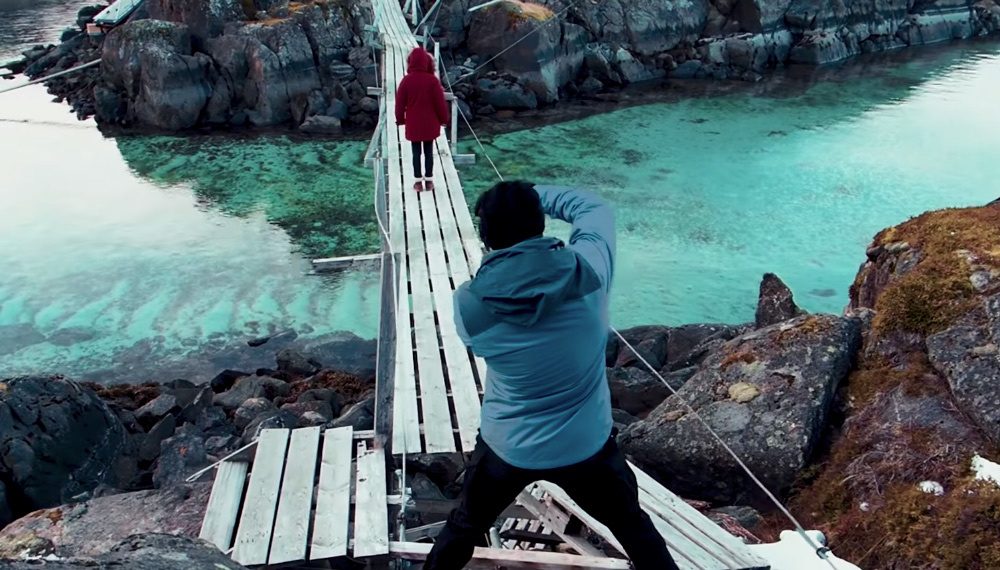 Screenshot from olympusXplorers in Lapland.

In stark contrast, the outdoor industry — a sector that’s arguably perhaps a little more progressive in its attitudes towards gender — is up to speed with the fact that women are equally capable of going on adventures. This is a realization that has largely been driven by greater recognition of equality and women’s increased spending power. To a frequent consumer of outdoor industry-related media, the way that Olympus is perpetuating stereotypical gender norms with its Xplorers series feels strangely out of place.

The photography industry seems to be a little slower when it comes to understanding gender politics, and while it may seem that the overwhelming majority of photographers are men, the numbers don’t necessarily agree. These statistics from the U.S. Department of Labor suggest that of 205,000 photographers, 47.7 percent are women. When you also take into consideration the fact that women account for 85 percent of all consumer purchases, you have to question why so much of photography’s media is geared deliberately towards men and is at times markedly sexist. I’ve lost count of the number of male photography YouTube gurus who are perfectly happy to present themselves as technically skilled, all-knowing fonts of wisdom while female models stand awkwardly alongside, not speaking, often unnamed, offering some flesh for an audience that is assumed to be unable to make it through a video if there isn’t something pretty to look at.

Gear / October 8, 2019
What is the Greatest Quality of Life Addition to Modern Cameras?

Gear / December 26, 2018
The More Cameras Change, the More the Basics Stay the Same

Just like those whiny "War on Christmas" people or the people who say everyone should have to speak English all the time.

Oy. They've probably done the market research and found that the majority of their user base is men. So what?

So, they loose revenues.

It's important to realize that advertisements often target a specific audience and no one should feel deterred from doing what they love because of perceived gate-keeping.

Photography is for everyone. Nothing about this says 'MEN ONLY.'

It's important to realize that advertisements ALWAYS target a specific audience...

Fixed that for you.

Go play with your dolls! Cameras are for BOYS!

Unsurprisingly the senior management is all male : http://www.olympusamerica.com/corporate/corp_meet_our_leadership.asp

So you're saying men are better at photography AND management? ;-)

Somebody has to stirred this up. This thread has been entirely too civil up 'til now! ;-)

::Walks away and locks himself in a quiet room with some vodka.::

Well, where is the controversy? It is all true.

I would rather say that they are confined in their "alpha male bubble" and too blind to see the potential in changing their approach.

My niece is a premier wedding photographer and loves her Nikons. At Thanksgiving we were discussing cameras and lenses and know one else had a clue what we were talking about.
http://www.maggshots.com

Hahahaha I love how you talk to yourself.

Not that it has any relevance to anything, but what job is this?

I'm actually impressed by how obscure a reference you've managed to pull out here. LOL! Maybe it's actually not that obscure, but it's certainly something I've never heard of. :P

Don't generalisize genders. We are all just photographers and we all have our favourite sectors. The gender doesn't matter at all!
I love exploring the world and shooting landscapes.

The future isn't looking too bright, with the total backfire of the #metoo movement:

People said the same thing about other Civil Rights laws.

"Don't go stirring up trouble asking for your rights."

Problem is, many of these women didn't ask for their rights until 20+ years after the fact, when nothing can be proven either way. The next problem is, just accusations have caused men to be fired. And the final problem is, some of these women have lied about everything. Put all of that together, and it's a complete mess.

You sound like you're more angry with the women who report rapes than the men who commit them. Many of these women didn't ask anything other than to be heard. They're not responsible for society's or the medias reaction. They just didn't want to live with such a horrible secret. Part of healing is talking about trauma. Sure some women will abuse this opportunity, just like some men rape. If you want the benefit of the doubt for men, you've gotta give it to women too.

Thing is, you can bet that these same women would instantly call the police if their house was robbed or even broken into. Saying they didn't want to live with such a horrible secret places the blame on them for keeping it a secret in the first place. If you're wronged, go to the police. If you don't, it's basically saying you're OK with what happened, as you've made no attempt to contest it. And coming back 20+ years later expecting anything to happen is wishful thinking anywhere except the SJW capital of Hollywood, where "innocent until proven guilty" does not exist. If those were normal people being fired from their jobs, instead of overpaid actors with more than enough money already, you can bet there'd be lawsuits against those employers all over the place. The fact that all of that actually happened set a bad enough precedent. And it's exactly why the issue in the article I posted has occurred.

If you think your house being broken into is analogous to sexual assault and not reporting a rape immediately after is implicit consent to it after the fact, you gravely misunderstand the psychological toll sexual assault has on a victim. Victims are not responsible for the way society reacts to them coming forward and good god, not immediately reporting a rape does not mean a victim is implying their consent to it. Fear of physical retaliation, fear of career consequences, shame, fear of not being taken seriously, feelings of helplessness, depression, disbelief, dissociation, having been drugged — all of these and more are reasons someone might not immediately report a rape. Have a little empathy, dude.