The Rhino Slider Evo and Motion Controller is in my opinion the best slider system on the market. It's incredibly robust, shockingly simple to setup and use, and best of all, it's all powered with an internal battery in the controller itself. The new motorized pan head Rhino Arc takes this system to the next level.

I personally have the 24inch Rhino Slider Evo Carbon. It's super light weight and could in theory be used without the motion system, but I never want to go back to manually pushing my camera. The "motion" system adds a motor and a controller to this slider. By simply attaching the motor on the mount on the right side of the slider, you'll be able to control the side to side movement of your camera using the color screen on the Motion Controller. The controller connects securely to the motor via a standard Ethernet cable. If you want a short cable you can use the one in the box or you could swap it out for a longer one. I personally like the short one because the controller conveniently snaps onto the side of the motor using magnets.

The remote literally could not be easier to figure out and use; it only has two buttons and the color screen walks you through every option. In less than one minute your slider will be moving the camera with perfect precision. Once you use it one time, you'll never want to go back to a manual slider.

This system has now gotten even better with the creation of the Rhino Arc. The Arc is a small cylinder that screws onto to camera mount and allows the camera to pan from right to left. When combined with the slider, you'll have full control over sliding from side to side and panning from right to left.

The Arc unit itself also has an internal battery that allows it to run for hours without being plugged in and it doesn't add much weight. Even if you don't want to use the Arc for every shoot, you won't have any issue permanently leaving it attached to your slider.

I Only Have 3 Complaints About This System:

1: The Arc needs to be plugged into the controller via a small, somewhat proprietary, cable. As the slider moves from side to side this cable can become tangled in wheels. It can easily be overcome by wrapping the cable around something to keep it out of the way but it is annoying at times.

3: The remote charges using a somewhat standard AC adapter but the Arc charges via mini USB. If they have to charge separately it seems like they should accept the same cable.

It's rare that I come across a product that is this well designed. The Rhino Slider Evo with Motion and the Arc is such a pleasure to use that I recommend almost any videographer immediately go out and buy it. If you're shooting the next Hollywood blockbuster, this may not be hefty enough to hold your rig, but for 99% of video shooters, this system is the ultimate in both convenience and usefulness.

The inclusion of the Arc is a fantastic upgrade but the standard Rhino Slider Evo with Motion is where the true value lies. The ability to set a camera to automatically slide from side to side during an interview will enhance the quality of your footage more than almost anything else. If you think the Arc might be overkill for now, I would still suggest you buy the Evo and Motion system and simply add on the Arc later if you decide you need it. This entire system is totally modular and allows you to only buy and use exactly what you need for each shoot.

If you're in the market for a new slider and you're wondering if it's worth paying extra for a motorized version, it is. I've used other motorized systems that are big and bulky, confusing to use, or require an external battery, but this system doesn't suffer from any of that. It's currently my favorite piece of gear and I bet once you try it, you'll never want to go back to attempting these moves by hand.

Gear
Is the Edelkrone Motorized Camera Slider Setup Worth $2000?

Gear
New SSDmini Drives Aren’t Cheap, but Are They Worth It?
Log in or register to post comments

Oh No Lee! I ALWAYS AGREE with you, but you ought to do a review of this beautiful thing sitting in front of me.

The onboard fly-wheel makes sliding so smooooooooooootttttttttthhhhhhh!

Love to learn what you think. They'll send you one I bet.

Cinevate makes great products. We own 2 of their sliders. I've used the rhino fly wheel which is the exact same idea. It's great but I still don't want to go back to manual moves.

Thanks Lee for sharing your thoughts on this slider! I'll keep in mind when I'm in the market for one with a motor. I was actually looking for a starter slider to replace my current one that's not super smooth on the slide.

Should I make a video on how to make these type of sliders with phone app control for about 200 bucks.

Can it do tilt holding a full frame DSLR as well? That's what I want even if it triples the price.

Yeah I'll just make a plate to a worm gear

Ok I think I have all the parts laying around

I would loooove to! I own a Fuji and I believe there isn't a slider built for the lighter weight. Those sliders are overbuilt for the MILC weight and so they are way overpriced.

I have and love this slider system (two of them actually), nice review. I've owned 5 or 6 different sliders, including several more expensive system and this one is by far an all-around winner.

Spot on review. Love mine.

For a motorized slider, this looks the business. For a handheld slider for travel, I can't look past Edelkrone.

Is having the battery "fixed" inside the unit an advantage?

When they die out can you replace them or you need a new unit? Wouldn't having an extra battery in backup be useful?

Also, maybe you could check the manual (Iknow, no one does...) for the voltage and amps needed to charge the equipement and post it in an edit? It would make for quality info for people in the market for it (to order the correct type of USB converter/chargers.

I don't know about the overall life of the battery. Ive had mine for 8 months or so and in my experience, when doing TL photography, the battery in the controller lasted several sessions while sliding. The Arc (pan head) doesn't last nearly as long but should get you through one long one. From a video perspective, I have used this rig during interviews without any motor noise. The controller can be plugged into the wall and charged while working at the same time. The Arc can't. If it needs a charge, you need to let it charge. I'm not sure if they will release a firmware update for that but it would be super helpful. As long as I charge it up the night before, it works just fine. If it's a long day of filming, I plug it in during breaks. I love the kit and find myself using the 2ft way more than the 4ft since I can get away with one good tripod rather than needing two. Had a Pocket Dolly before this and am never going back. 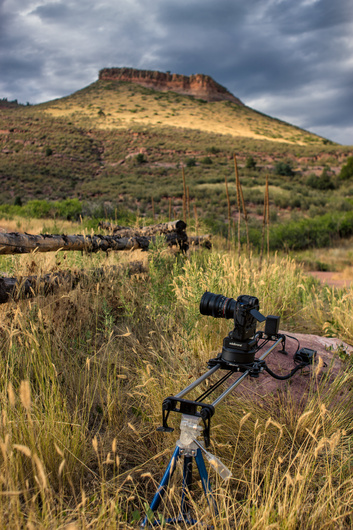 This is my big question. What happens in a year or so when the extended battery life of the Arc is gone?

It' sort of the Apple approach: Don't think about it and look how cool, versatile and useful it is!!!

When did it become acceptable to sell a product you can't replace the power source?

It can work plugged in with a high powered USB converter.

I have their V1 slider and love it, but have been holding out for the Evo upgrade for a couple of months... Thanks Lee, for pushing me over the edge and emptying $1000 from my bank account. Appreciate that! =P

Lee, What are your thoughts Edelkrone Slider Plus with target & action modules?

Might be great but I personally have not tested them.

Can the Rhino be adapted to 3-axis? Also, have you tried the Cinetics, or Kessler? Just curious.

I love my Rhino but I will add to the software needs update- they need to be able to let you store a move when powered off in memory. They also need to let you do a shortcut quick return to center for focusing when doing a slow arc pan-

Question, to start out do I really need the metal one instead of carbon fiber. I will be using it with my Canon 6D as well as my Canon C100. Secondly, is the extra length at 42" worth it or is 2' long enough? I will be using on interviews, slider reveals and time lapses. Thanks!

We personally have the short carbon version and we love the size.

What exactly makes this superior to something like a Syrp Genie and magic Carpet?