Here's a Cost-Effective Way to Get Some Really Long Glass

Like many photographers in quarantine, I’ve been trying to get creative without the ability to get out. I’ve had a lot of gear sitting around that doesn’t get much use, and so I’ve gone through my boxes to dust them off and see what’s possible. One gem I had forgotten about was the FotodioX Mount Adapter that lets me mount my Nikon F glass to my Micro Four Thirds cameras.

Why is it a gem? Aside from the fact that it’s under $20, it opens up a world of lenses that I don’t have or that don’t exist in the world of Micro Four Thirds. While most focal lengths already are duplicated between systems, the fact that full frame lenses are, effectively, doubled in focal length makes for some interesting possibilities. I decided to bust out my Nikon AF-S NIKKOR 200-500mm f/5.6E ED VR Lens and hook it up to my Olympus OM-D E-M10 Mark II (which is a seriously good deal at $349 right now) and point it at one of my favorite long-lens targets, the moon. With a little help from my tiny quarantine partner, the camera setup above, while down on megapixels compared to say, a Nikon D850, did an admirable job.

At just under $20, there are definitely a lot of compromises. As an “E” lens from Nikon, there are no manual aperture controls to speak of and so the lens aperture is wide open all the time. Luckily this isn’t a problem with the Nikon 200-500mm because it’s fairly sharp even wide open at f/5.6. Metering still works just fine. Older “D” lenses I have, such as an ancient Nikon 70-300mm f/4-5.6D ED AF, have mechanical aperture rings (like many current-day Fujifilm X lenses) and so with these, you still have some control over aperture. But if you have a “G” lens without the ring, there is still a possibility to control aperture with other adapters that have an aperture ring built-in. Of course focus is manual no matter which way you go. Having a sharp lens is key, as my 70-300, were I forced to shoot it wide open, just wouldn’t hold up. There are weird mirror lenses out there as well that can reach these long focal lengths, but with questionable quality out of the box, I shudder to think about what one would do when adapted.

I thought about the implications of this setup and thought about one group of photographers that probably has long glass at home and could benefit from the distancing that 1000mm can provide. Photojournalists are often asked to put themselves in harm’s way during this global pandemic, and while sometimes you can’t do the job any other way but in close proximity to other people, other times, it can come in handy. For instance, I wouldn’t want to go anywhere near a COVID-19 testing site if I can help it, but with 1000mm on tap, I could shoot this one at Stony Brook University from safely across the street and then some:

This COVID-19 testing center at Stony Brook University was shot from very, very far away with a 1000mm equivalent setup.

It's not technically perfect, but it beats potentially getting infected with the coronavirus.

The closest you can get the traditional way is to purchase a Nikon AF-S NIKKOR 800mm f/5.6E FL ED VR Lens which would give you the net bonuses of autofocus and better image quality, but at just over $16,000, the total cost of my setup, lens, adapter and camera, comes in at under $1,800, and gets you a good chunk of the way there in at least some situations. If nothing else, you’ll have extreme focal lengths that you didn’t think of before to play with.

And while we’re on the subject of things that I didn’t think of before, here’s another one to watch out for when using super-telephoto lenses: heat wave distortion. Not something I’ve seen too many times, but at 1000mm, it was definitely a thing.

Now if anyone has the 800mm and wants to give it a try on a Micro Four Thirds camera, that’s something that’s a setup that can really go the distance.

What teleconverter did you use? I am looking for one to use with my a6400.
I recently went the other direction [macro tube extension] and the results were so promising it made me think of the teleconverter setup to give my 18-135 kit lens some more reach.

There was no teleconverter used here. Just a Nikon to MFT mount adapter. The MFT crop factor gives the extra reach.

Here it is. Hand held. Bald eagle added just for the fun of it 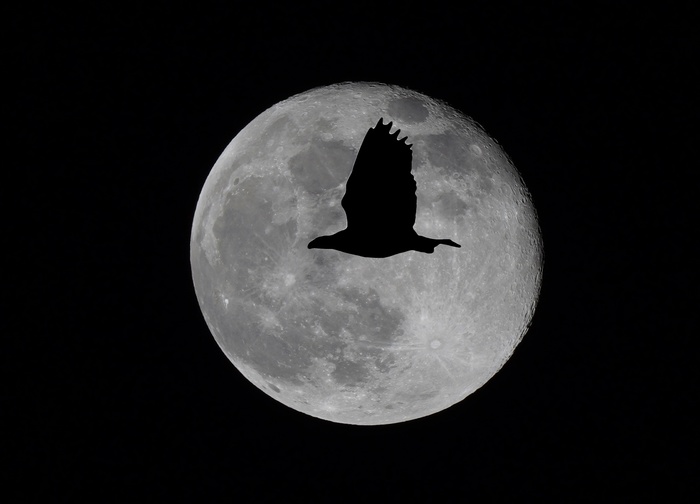 Why f11 and 1/125? You could go for much faster shutter speed and drop the aperture to 5.6 od f8 since dof is not an issue here. But the moon moving is. Although appears that it moves slowly just take a look thru the telepohoto lens mounted on a tripod and see how it moves out of frame.

Just my 5 cents.. (did the next day super moon shot since it was cloudy on a previous night)

I could use multiple combination of settings, but smallest aperture with extender on my lens is 8 and I wanted to do ISO 100 to keep the noise down. Also this picture is heavy crop down to 4MP from 60MP. I did some shots at faster speed and higher ISO but for some reason this shot looked better than others. If I wanted to try for the best I should have my camera on tripod, but I just wanted to do something quick and dirty. This picture was never intended to be posted, but Wasim asked me to post it so I did.

I think it came out great! It's not about the settings or the setup, but what the results are (in this article I'm using a far from ideal setup!)

"There are weird mirror lenses out there as well that can reach these long focal lengths, but with questionable quality out of the box, I shudder to think about what one would do when adapted."

While mirror lenses were never that great, low contrast, sticking one on an Oly is not going to make it any worse. There's no glass in a lens mount adaptor.

I've had 5-6 mirror lenses (300-1000mm). The best so far is Sigma's 600mm (Ver.2); good image quality but always a problem to get a good focus. The Minolta AF 500mm is autofocus but the quality is missing. Hard to get image quality and ease of use in one package with a reflex lens!

As an astrophotographer I've acquired several refractors in the 500-900mm range which yield excellent image quality (but of course are manual focus with a constant aperture) and can be bought for a very reasonable price. Add a 1.4x or 2x teleconverter (Tele Vue's 2x PowerMate is very good!) into the mix and you can reach 1000-2000mm on a reasonable budget.

I'm a Sony mirrorless shooter and have found Sony's FE 200-600 zoom to yield excellent image quality (on an A7S, A7 III, A6000(M) and A6100). Sony's 1.4x teleconverter pushes this to 840mm with almost no reduction in image quality. I could go with a 2x teleconverter but have always had doubts about doubling a lens' faults.