How Taking Abstract Landscapes Helps to Ease my Anxiety

If you ever feel the weight of the world on top of you, you might want to consider letting loose with your camera. I've found that going outside and having fun with my camera is a fantastic way to combat stress and anxiousness.

After seeing Nigel Danson's lovely video a couple of weeks ago, about simple creative outdoor photography ideas, I decided to take a look back at some older photos of my own, most of which I've never shared because they're so different from my other stuff. Turns out they're not too bad, but it brought me back, in my mind, to the moment I was taking them and I remembered the fun I had.

I remembered that for all those times, the reason I experimented with longer shutter speeds and ICM (intentional camera movement), I had been frustrated with something about my excursion that day; whether it was the fact that the light wasn't doing what I demanded of it or maybe I had just picked out an unsuitable location for the type of landscape I had in mind. I was either shaking my fist at the sky like a madman because, clearly, Nature had it in for me, or mentally shaking a fist at myself for how stupid I was because I had picked out a wonderfully rocky cove on Google Maps but forgot to check the tide times. So, instead of going home frustrated and possibly eating enough chocolate for a large family, each of these times I ripped off the chains of perfect front to back sharpness and started waving my camera to and fro like a drunken lookout. A little while later, after reviewing some of the images on the back of my camera, I felt much better about the Universe, and it's conspiracy against me. I didn't need it anymore. I created my own world of straight waves and blurry birds; I was happy.

I never suffered very badly with anxiety, but there are some times where I need to just shut the curtains and lie in bed for a day because my head is spinning, so much so that I can't form a consistent or coherent thought. Thankfully, in recent years, due to some lifestyle changes I've managed to come off of medication indefinitely and lead a much more balanced life. But, of course sometimes life does get in the way, and due to some bad news in my personal life recently, my anxiety started creeping back in. The first thing to go was my balanced diet, then my running fell by the wayside, then the dark thoughts started to invade. Holy crap, we can be real A-holes to ourselves, sometimes. I say "we" because I think that regardless of any underlying medical conditions, nearly everyone has the capacity to self-flagellate, with creatives being up there with the worst of them.

I had to go through the motions with regards to my bad news, like anyone else, but getting back into the swing of things after a hefty punch to the gut is pretty difficult. So after "disposing" of all the chocolate in the south west of Ireland, I again came back to some of my old abstract images and started tweaking them here and there. I wasn't focused on straight verticals or seamless exposure blends; I was in the moment again, enjoying being creative without having to concentrate on any technical aspects. After that, I peered through my curtains, and on seeing the blustery, moody sky, I decided to do a bit of location scouting; no pressure, just a wee spin up the coast.

Low and behold I came across a beach-town scene quite typical of Ireland and Britain. The amber/yellow sand playing against a dark sky of multiple hues of blue where the sun seemed to be playing a game of hide and seek (mostly hide) tempted me onto the beach. This, I thought, was a perfect time to whip out my camera for some ICM. I affixed my NiSi kit, with their landscape CPL and 0.9ND so I could increase the shutter time. In Danson's video, he uses a shutter speed of 1/10th with a fast sweep upwards. I wanted to take in more of the scene so I used a shutter speed of 0.8 or 1 second while sweeping my camera across the beach, and because of the longer shutter speed, I opted to use a tripod as I wanted a straight horizon. Using the properly leveled tripod helped me to get a smooth sweep across the scene.

My three favorite shots from the moody beach.

This wasn't the first time that I was out shooting since my recent rut, but because I wasn't too constrained by the light, time of day, or location I was able to get some decent images and, more importantly, I had fun and my mind was more at ease. Learning to be in the moment is a powerful weapon for those who battle anxiety. I know that the Universe is plotting it's next move, however, next time I'll be ready.

For me, there is a pureness to abstract photography. It's like a visual stream of consciousness. I'm sure that some of you really don't like (hate, even) abstract art, and you probably rolled your eyes at those last two sentences, but have you ever given it a go? I hope that this article helps to nudge you that way. And, if any of you would like to share your abstracts with us in the comment section below, please go ahead.

Thanks for sharing. Loving it - especially the middle moody beach...

Thanks so much, Scott. I think it's my favorite too.

whatever helps is what you should do, great story.

Thanks, Justin. That's a gorgeous shot!

Very cool. I also found the same result of anxiety alleviation by the pursuit of photography. Thanks for sharing your journey

Thanks, Karl. Great to hear.

Cheers, Terry. As long as you feel happy while out shooting, that's what matters.

very good article and nice pictures. I always test it with seascape 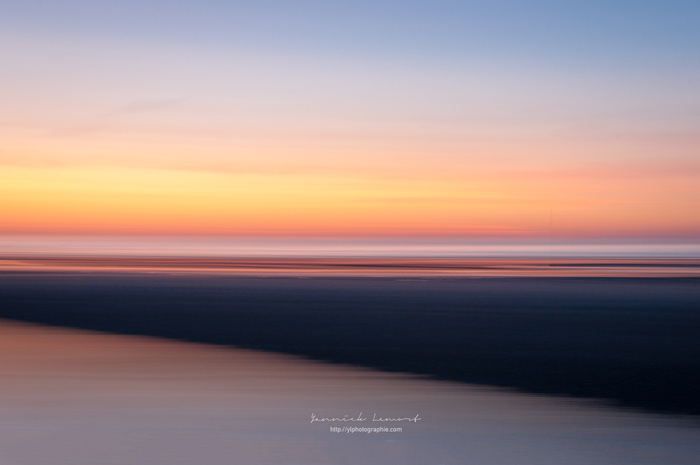 A realy great article and I’m glad I read it. Lovely shots too, moody beach is great.

I started in photography 5 years ago due to two reasons. A need to create but also to maintain my mental sanity, Being out there doing this kind of moments gives us a connection with Mother Nature that is really difficult to put on words.
Lovely work and thoughts, congrats Mike!

Thanks, Pedro. Being alone in the outdoors is a very happy place for me. It is indeed difficult to put into words.

Thanks for sharing. Discovering hidden beauty is always rewarding and you are doing that really well.

Thanks so much, Marcin.

Nice shots, getting outside and shooting is good for the soul.

Cheers, Michael. It sure is!

Mike... I really admire you and all the photographers that are able to "just have fun" and "just take pictures". I am serious... I really miss to be able to just take pictures and to see what comes out... All of my work is to satisfy my clients, to meet their expectations and to exceed them, because I need to get paid and pay my bills.

At times... I am envious, when I am coming from a gig in NYC... on my way to a spot to upload the photos I've just taken for a client... and see photographers with the camera hanging from their neck and just having fun shooting...

I miss that... but I want to be clear... I do enjoy my job... I am happier taking photos and making a living with it, than working a 9-5 office job... but... that part... of just shooting my OWN vision, random, that is sadly missing from my life... but you and all those other photographers that have that ability are guiding lights to me!

Thanks for your article!

Thanks for the kind words, Udor. I completely understand where your coming from. At the same time, isn't it great that you've so much work?

I've only been a pro for just over a year and I'm still building my client list so I fill it by building my portfolio and this is part of the process for me. Not having to worry about a deadline is liberating but I'd love the money to travel to Iceland to do that! Swings and roundabouts. :)