Is It Absolutely Vital to Have Tack Sharp Images?

After a photo shoot, most photographers cull through their images on their favorite software. During this process, images that stand out are kept for post-processing, and rejects are thrown away. But what exactly constitutes an image worthy of making the cut?

90 percent of photographers are willing to admit that not all of their images come out tack sharp; the other 10 percent are likely being dishonest. When culling through a test shoot from this past weekend, an image really stood out to me, though it was a smidgen out of focus. This photo had me thinking: "What exactly qualifies as a 'keeper' image?" Does it have to be 100% razor-sharp? Or does overall composition, lighting, and expression hold more value than sharpness?

The example shown above begs the question: if you saw that the eyes were slightly out of focus, would this be a winner or a throwaway? As you can see towards the edges of the image, the photo is back-focused slightly; we're talking millimeters here. Now, probably due to my own error, I must have inched forward just enough when the focus was locked down, and you can also tell I was shooting at a wide aperture.

I'm an advocate of the idea that sharpness is crucial to an image’s quality or lack thereof. I would say the majority of my final images are indeed sharp; especially in the eyes. But in some cases, is it acceptable to have an image that may be slightly out of focus make the cut? I believe that as long as an image’s composition, lighting, and expression is strong enough, it is acceptable to use that photo.

Ultimately, I decided to go forward with processing the image and I am satisfied with the outcome. The model, Hannah, pulled off a wonderful expression that was very strong. I was more than content with the expression, lighting, and composition. If I were to nitpick, I would have liked the forehead and maybe even the nose to have more texture, but since the focus slipped and I was using a wide aperture, that is not the case.

That being said, I would like to ask you: What criteria do you look for when selecting your images? Does the image have to be 100 percent sharp? Or, is it a combination of composition, lighting, etc.?

my OCD cannot allow it!

Only if there wasn't a close enough runner up. I shoot a lot of extra frames so I'm usually fortunate to have one that cuts the mustard.

Right there with you Justin... My OCD drives me nuts.

I run into this often and my response is "how/where is this image going to be displayed?"

If it's going to be used primarily online or on a billboard, then critical sharpness (of a face) is usually not noticeable. So, as much as it pains me, if I shot something like your example photo, the pose/composition would win.

If the image is going to print (catalog, magazine, poster, display, etc.), critical sharpness would be more important and I'd suck it up and select a different shot.

I'm with you on this one, I'm nowhere near the level of photography as a lot of the other people on FS but sharpness is everything for me. No matter how good my composition and exposure might be, if it ain't sharp - it ain't happening.

would be nice but composition, lighting and how it makes you feel can balance out not being tach sharp.

I'm guessing when we all have higher res monitors, akin to print resolution dpi, we will stop blowing things up to 100% and things will be more like when film was printed in the darkroom. That'll be funny because as we err towards higher resolution, we may start to accept softer images.

I've a few favourite shots that don't hit the mark technically. And I've never had a client worry like I do when the eyes aren't perfect focus at F1.2 I sometimes think we photographers are a strange lot...

I'm skeptical about this citation...

Which was a facetious comment Cartier-Bresson made in jest, referring to the fact that age had made his hands shaky.

It was never intended as the excuse for sloppy technique today's photographic "artistes" have made it.

I think it depends on the type of photography you are doing. My hobby is candid street so sharpness comes third after content and composition

since most of my photos are this sharp anyway, I'll say composition, lighting and story come first, I was a tack sharp searcher freak, while I try to get the photo technically correct, I worry more now to get the moment, actually, I'm hired based on this most of the time, not the sharpest photos in the market but clients tend to love them anyway.

Agree with you there, I tend to be a pixel peeper at times but in reality...will the majority actually notice?

It depends, you cannot get away with OOF product shots in most cases. When shooting people, there's more leeway. With a casual outside shot like the one in question there's a little more leeway but IMO the eyes should be in focus. If this is the A#1 best shot then go with it and let the other things (lighting, expression, etc) make it special. If it was a higher production with more complex lighting or posing etc. then OOF is a fail.

It also depends on the client and the final product, too. If its a controlled environment, there isn't much of an excuse for a not sharp image, but otherwise, like others have said, I love a well composed, emotional shot slightly out of focus better another that is less so but sharp.

I think it's absolutley vital to have the OPTION to have tack sharp images. Some modern portrait lenses can work against you with their sharpness. The 85mm f/1.4 Nikkor G immediately comes to mind. While it is incredibly sharp clear across the focused plane wide open, it does so by sacrificing the very reason you use a lens like this in the first place, bokeh. The 85 G has a stratified bokeh that is unfortunate. The previous D model, while not as perfectly sharp, has exactly the kind of desireable bokeh that is the reason you shoot with a lens like this in the first place.

which is why I refuse to ever give up my 85mm D series.

As Frank Doorhof says, if your image isn't perfectly focused, change to black and white, crank the contrast, add some grain; you get instant art.

For me that example image is out of focus too much and would be culled. Sometimes however if the image is only going to be for web and the expression and everything else is amazing I'll accept a small mis-focus. A wedding situation might be slightly different however where the emotion of the image comes first and because things move so fast accidents happen. So I suppose it depends on the occasion and where the final image will be displayed for me.

depends per image. this article reminds me of this photo of mila kunis in esquire. completely out of focus and camera shake involved here but overall it's a nice shot of a nice looking chick that made it to print 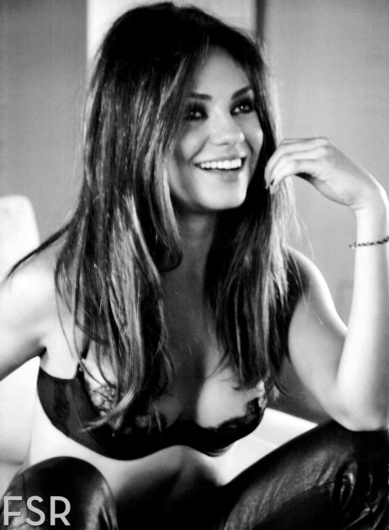 This is a good example of how the "degree" of sharpness helps to determine the intention of the photographer. If a photograph is wildly blurry and de-focused, then it's reasonable to assume that the effect was intentional on the part of the photographer. Ellen Von Unwerth and Paolo Roversi are well known for shooting in this manner.

The problem comes when a photograph has only a slight degree of softness because then it looks like the photographer was actually trying to get it sharp and failed. The average viewer will rarely notice if a lens was focused incorrectly so it's possible to get away with it from a practical point of view. But, it's definitely sloppy on the photographer's part and people that are serious about craftsmanship should always look at it as a sign of a hack.

In the end all you need is someone like Mila and they will say "What was out of focus?"

To me that one is overly out of focus, especially for a big print publication like that. If I can tell it that much on the web, then it probably looked worse on the page.

For this image I would be able to sharpen so that any client (not commercial) would never know. For time it's faster just to reject, but if it's a great shot, I sharpen these and give to clients.

Great to hear everyone's feedback! Sounds it comes down to a case-to-case basis relevant to what your shooting and who you're shooting for.

I think Hannah is beautiful and it's a very nice photo. Would have I liked it a bit sharper ? Yeah of course, but this pic is a keeper for me. Good job.

unless your taking bigfoot pics. then they are required to be out of focus.

When you can't figure out why yours aren't, yes