Medium Format in Toyko: My First Foray With Fujifilm

I might have been in Tokyo to watch the GFX 100 be ushered into the public eye, but I had been armed with a GFX 50R, and I intended to bleed every last moment out of it.

At the beginning of this year, I wrote an article about how I think Fujifilm is underrated, how they're innovating as much as or more than any other brand, and posed the question of what they need to do to challenge "the big three." By pure coincidence — not one of those dodgy influencer coincidences — a few months later, I was invited to Japan for the launch of the GFX 100. I was utterly transparent with Fuji: I told them I'm not particularly familiar with using their cameras, I don't own any of their products, but I am interested in them. To stop me from spending an entire Fuji themed trip with a Sony in my hands, they asked me which camera I would like to try and to shoot with for the duration of my time in Tokyo. I chose the GFX 50R.

I'll premise this article with the following admission: I'm not one of those deep-diving, scientifically analyzing, spec-testing photographers. We have multiple of these here at Fstoppers, and I admire their rigorous examination of new cameras in their reviews, none more so than Alex Cooke. But my interest in cameras and lenses isn't quantifiable in the same way. Yes I like a good spec and I need certain features for my commercial work, but my approach to a camera is similar to my approach to my other love: cars. For me, it's not about having the fastest 0-62 mph, the quickest lap around the Nürburgring, or the most advance ECU. It's about how it makes me feel when I'm driving it.

When it arrived, accompanied by the 32-64mm f/4 and the 110mm f/2 lenses, I must admit, I laughed out loud. I'd been using mirrorless for some time at this point, and the sheer size and weight of the body alone was suddenly comical. As I described it in a recent article, the GFX 50R looked like an 80s-themed brick, complete with cogs and switches straight off of industrial machinery. I plonked the Fuji and a lens next to my Sony and a lens to really get a sense of scale. 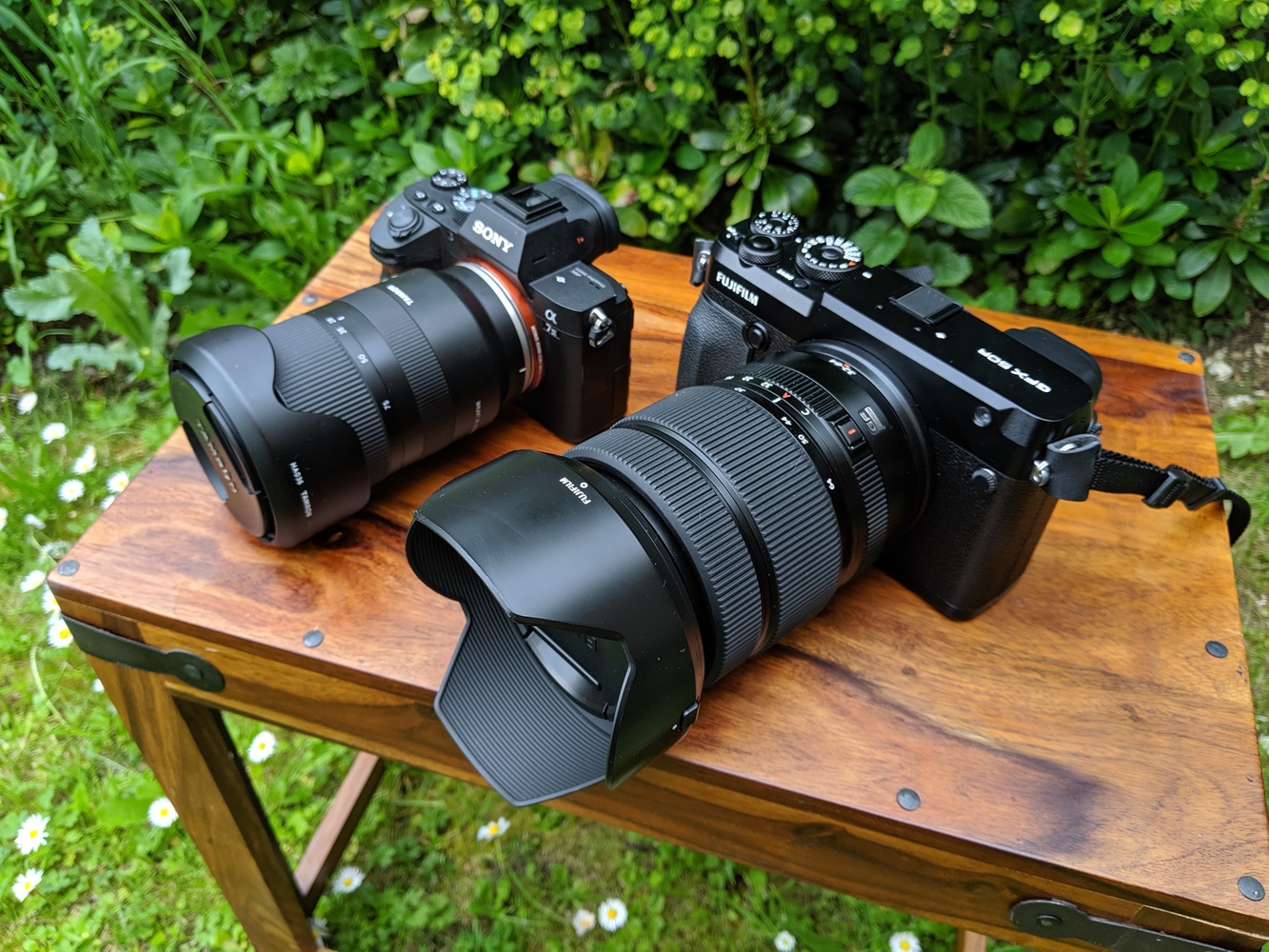 With the 32-64mm attached, I set out to hunt down my subject for all new equipment: my cat. I noticed immediately that shooting with the 50R wasn't perfectly comfortable. The body's ergonomics and design felt off. The grip on the right-hand side of the body was the only aspect of the camera that was small, and the least useful in being so. The buttons, cogs, and switches felt clumsy to handle while shooting and I wondered if the medium format close relationship with tripods was still true. Even the power switch felt as if it needed some WD 40. I couldn't imagine how I was going to walk around Tokyo for 5 days with this camera, despite how much I like the medium format "look" and trying different equipment. With my cat mirroring my furrowed brow as the 50R eclipsed most of my head, I made a decision. I would only take the Fuji camera with me, so I didn't have a choice but to use it.

It's worth mentioning that Fuji didn't ask me to review this camera or even write about it; I was there for the launch of the GFX 100. In fact, if they're reading, I suspect so far they would be pretty displeased, but sit tight, because the car pulled a dramatic u-turn.

The shots of my cat were quite nice. The medium format look was sort of there. I could imagine landscape photographers would enjoy such a body and lens combination. But I couldn't see the extra pixels on the camera's screen and my tepid reaction was the result of a tepid test. So, now in Tokyo, I put the 110mm f/2 on the front. The circumference of this lens is quite staggering, and the weight kept up with its stocky appearance. However, that 110mm focal length is close to my favored 85mm on a full-frame sensor, and f/2 is a very generous widest aperture. The first shot I took was of a small wooden carving in the hotel's garden. It was a throwaway and dull, but it immediately changed everything. The look of the image, the depth, the light, the colors; everything just captivated me.

The 32-64mm barely got an outing from that moment on. With the 110mm, I felt like I couldn't take an ugly shot. Suddenly, those cumbersome cogs and switches felt satisfying, the weight felt like a hallmark of quality, and the process of taking a photograph felt more engaging. Perhaps the effort exerted to aim the camera being so much higher than with my a7 III meant I was mentally more present for the shot — I'm honestly not sure — but I felt like I was plying a skill again. It wasn't long before I was asking locals in broken Japanese whether I could take their portrait; I had to see what eye AF in conjunction with medium format and this wonderful lens could produce. 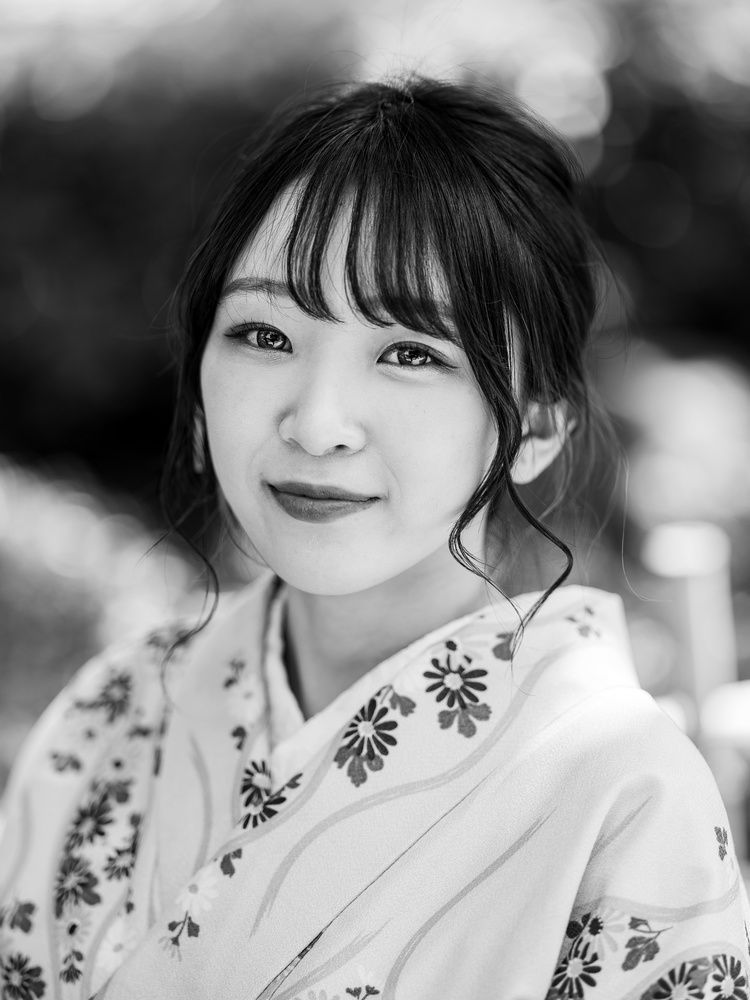 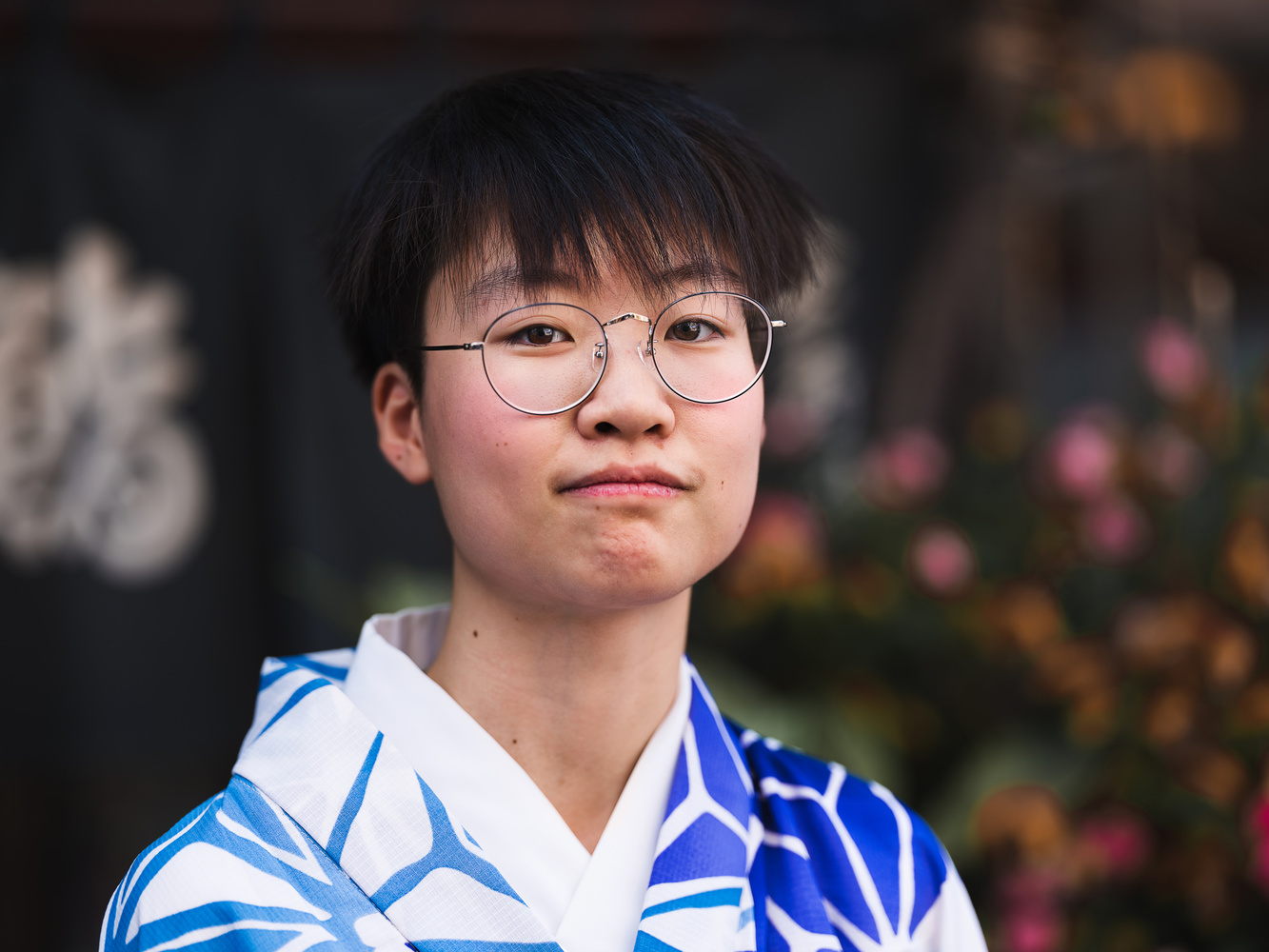 It did not disappoint. The focusing felt swift and accurate with little hunting, and the resulting images just had something. I still don't quite know how to articulate it. To test whether I was just biased as I love portraiture and particularly that of other cultures from my own, I decided that evening I would do street and cityscapes and use both lenses at my disposal. The first was from the roof of Cross Dock Harumi at Fujikina 2019. 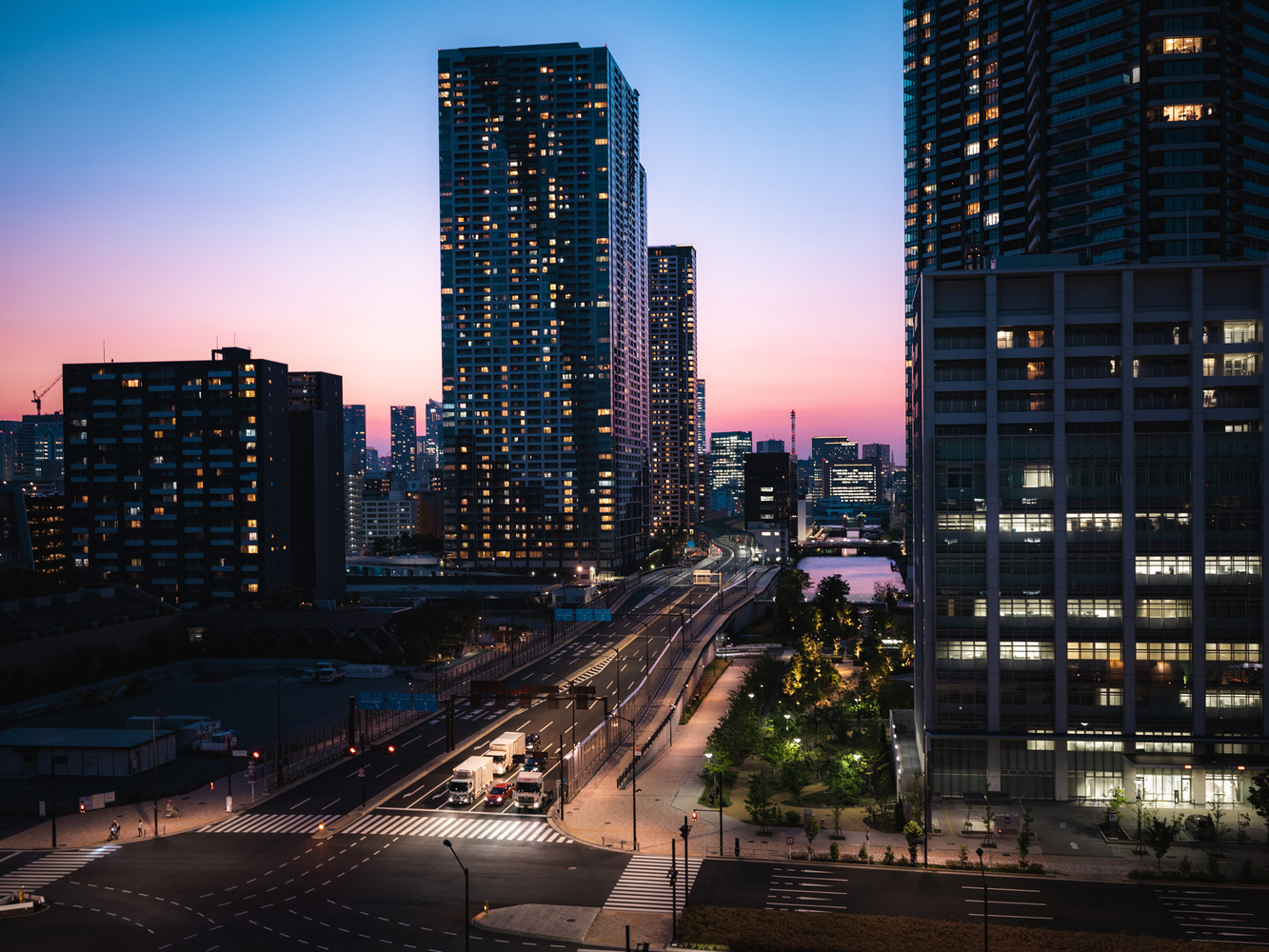 Without noticing, I slipped back in to my old ways. I just wanted to take pictures, and I was willing to miss meals, dehydrate, and exhaust myself to do so. A lot of the street shots were taken one night when I had finished a factory tour with Fuji and returned to Tokyo by bullet train in the early evening. I was a two-hour walk from my hotel, but there were plenty of taxis. Despite hauling around 10-15 kg of equipment, I decided to walk the first half-hour so I could take some snaps en route. Before I knew it, it was 3 hours later and I was nearing the hotel. It was getting late and I had to be up early, but I was in a perpetual state of "one more shot," and without anyone with me to put their foot down, continue on I did. 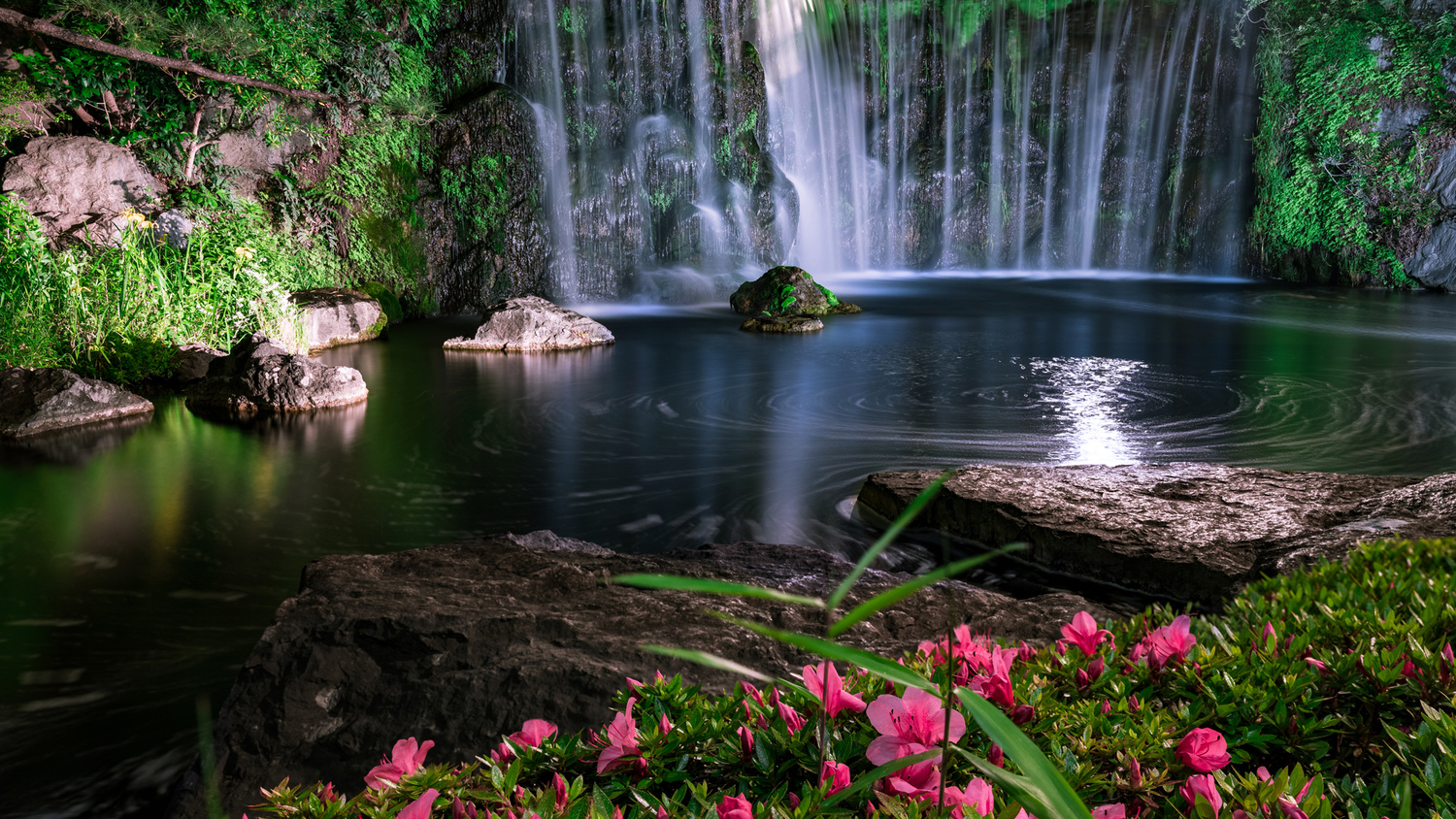 The difference between full-frame and medium format in actuality, isn't as substantial as some may make out. Don't get me wrong, the image quality and size is staggering, but in practical use, even for my commercial work, I shouldn't think I'd put it to much use. I don't need a GFX 50R or the drool-worthy GFX 100 Fuji sent me out there to see. The differences in the image themselves, all things being equal and printed the same size, are subtle. I doubt many non-photographers would be able to separate the two with ease, but I would bet if they had to choose which they preferred, the medium format would win most of the time. My first foray with Fujifilm and indeed medium format can be summarized as so: I don't need one, but I really want one. Perhaps it's placebo, perhaps it's real, but either way, the GFX 50R captivated and invigorated me, and my limited time with the GFX 100 looked only to further that sensation.

Gun to my head before I left for Tokyo, if I was made to choose only one camera and lens for the rest of my shooting days, I'd have picked the a7 III and the Canon 135mm f/2. Gun to my head after the Tokyo trip, it's the GFX 100 and the Fujifilm 110mm.

Of course it’s highly subjective. I was a Canon 6D shooter before I Fell for Fuji. Was the 6D not a great camera? Of course it was. But it’s so much blasted fun shooting the X-T2 I’ve never looked back. I can’t wait to paw the GFXs.

Used the GFX50S when it came out. Returned it.
I just couldn't use it for the work I do. The controls are tiny, it's slow and honestly, image quality over the D850? and now Z7? Negligible, if at all.

Each to their own though, there are plenty of people that swear by the system, who am I to say they'd be wrong in their choices.

(I'm an Ex Fuji Ambassador btw, the Nikon stuff is my bread and butter and no matter how much I tried with Fujifilm (awesome team of people) the cameras never gave me what the Nikons do)

Agreed mostly if its for you great if not oh well EXCEPT for the people who try the camera for two to three hours. I don't care if its Anne Leibowitz nobody can pick up any camera to do a real job and get the most out of it with only two to three hours experience. These Utubers and the reviewers who test this equiptment for an afternoon have no business judging the system based on a few hours of studio or outdoor light.

Totally agree with you. That's why I steer clear of camera reviews. Any kit I buy, I try first. I'm not bothered what the masses say, or what popularity suggests. I'm the one that has to live with it, it's my bread and butter.

They sure do have that medium format look to them. Great shots!

Getting lost in the wonder of making photographs is a rare treat, and I could feel your enjoyment as I read your musings. Thank you, Robert.

" I doubt many non-photographers would be able to separate the two with ease, but I would bet if they had to choose which they preferred, the medium format would win most of the time."

Love the B&W shot of the Japanese lady! I got to try the GFX100 recently too and really enjoyed trying it out.

IMO there is no medium format look. Put an equivalent lens on your full frame (85mm 1.4) and you get exactly the same pictures - with slightly more bokeh even, cause the equivalent of the Fuji f/2.0 is f/1.6 on full frame.

So the only advantage you get here is more resolution with about the same noise characteristics like an APS-C. Cause the sensor pixel size of 3.76µm is roughly the same like a Sony Alpha 6000 (3.92µm)