For me, capturing a sunrise often coincides with a vacation. During the month of February 2015 temperatures were insanely cold. Memories of a fun-filled fall were long forgotten and cabin fever was starting to spread through the household. Worry not though, Groupon came to the rescue with a reasonable two-day pass for an indoor water park about ten minutes away in Niagara Falls, Ontario, Canada. The wife bought the deal, and I took Thursday and Friday off work. To Canada we go!

We had a great time at the water park. There is a lot to be said for summer fun in the winter. All the park fun was followed by a Hard Rock Cafe dinner which featured beer. Our crew included myself, my wife Nicole, and our two boys currently seven and three years old (so five and one at the time of this story). I'm pretty sure we were a spectacle wherever we ended up as we often are. But to me the key is being 100 percent OK with that since we really have fun and love our kids. But yes they are a handful, so the beer with dinner was appreciated and enjoyed. The Hard Rock also had a Trent Reznor guitar with a Trent Resnor plaque which I'm still surprised by. I would think the plaque engraver people were more on their game than that, but maybe NIN isn't a big deal in Canada. Anyways, I guess you care about the photo stuff.

The original game plan (existing only in my head of course) was this, on Friday morning I'd get up and shoot the sunrise right at the edge of the Horseshoe Falls. Thursday was unbelievably cold out, so I wondered about whether I'd actually be able to handle the elements for more than a few minutes with nothing between me and some of the coldest breath Mother Nature had to offer. I decided it was not an option to pass up on this rare opportunity so I committed to following through and set the alarm. 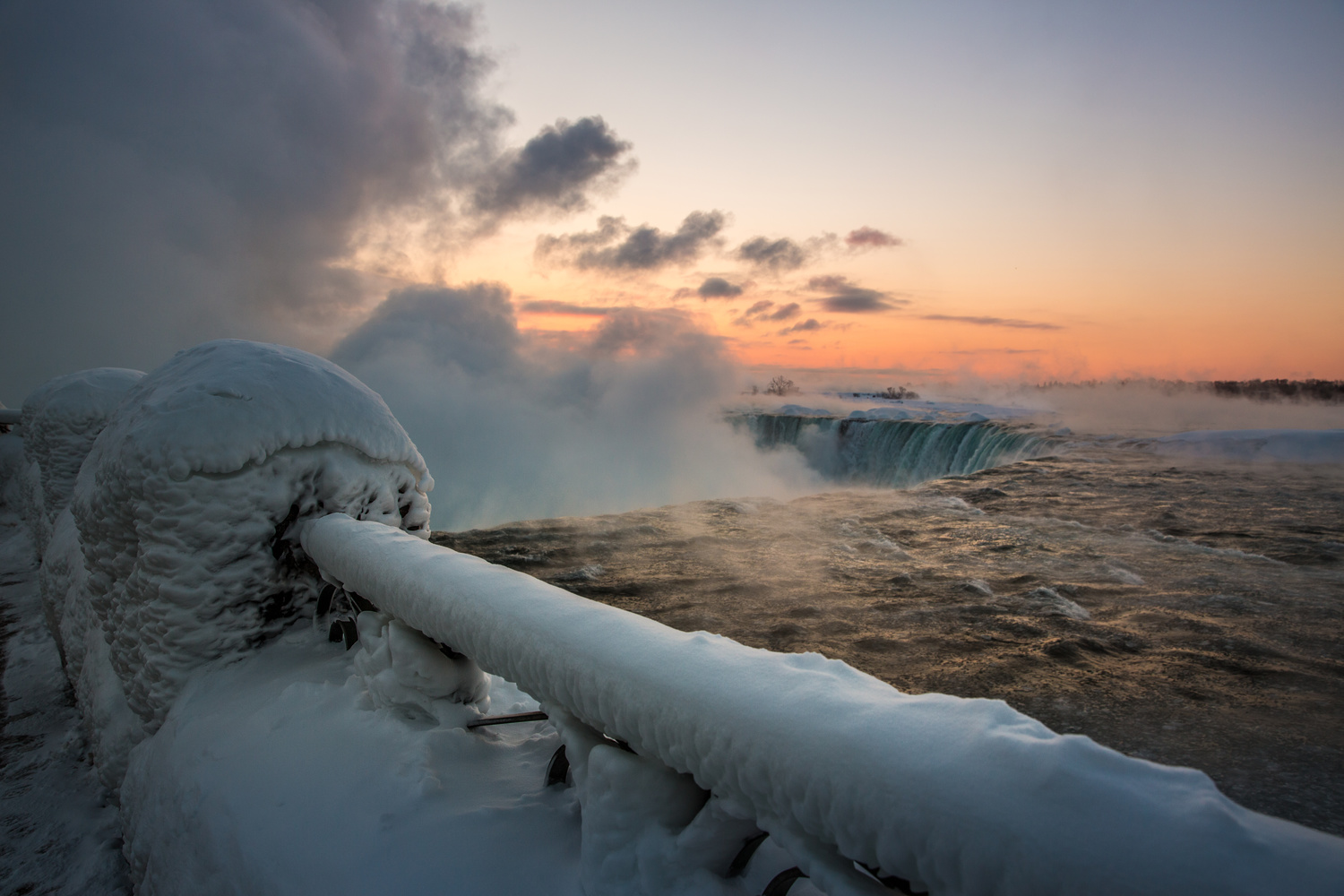 The temperature is clear by the ice covered railing. 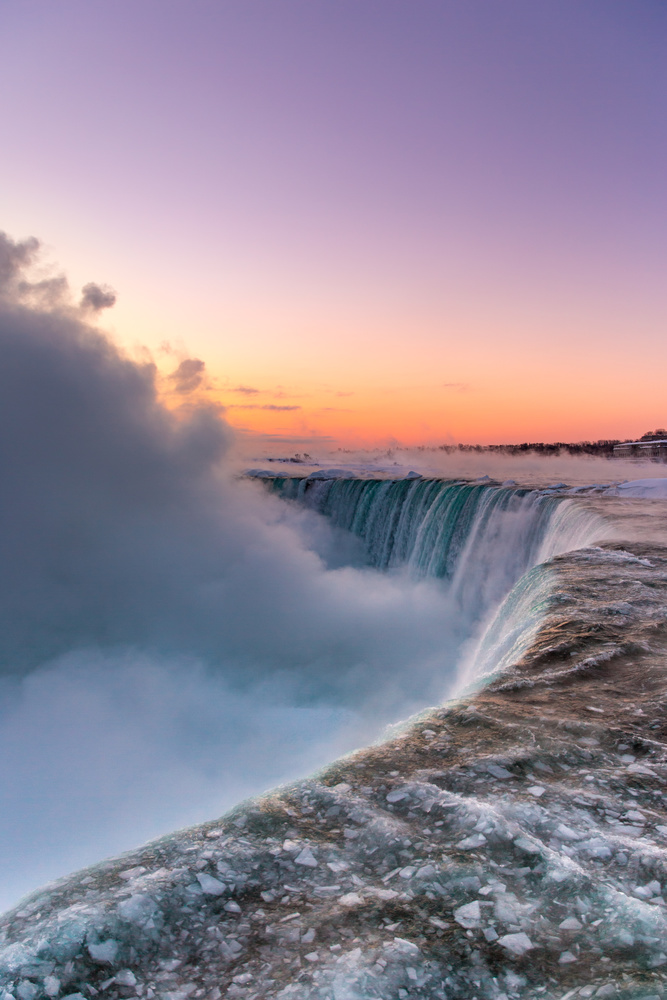 Check out the ice chunks on their way to the edge!

The alarm worked, I got dressed and snuck out of the room after many non ninja-like sounds got me the "shhh!" When I got to the van it showed -8 degrees as the current temperature. I shivered uncontrollably while it warmed and suddenly realized I had a problem. Being the non plan-ahead type, I didn't have my gloves. They were in the hotel room with the sleeping family. Oh well, I'll be fine I said. More on that later.

The ND filter had to be put on in the car since I knew it would be too cold to screw it on at the falls edge. When I got out there the conditions were insane. I literally was wondering what I was doing there the whole time and kept thinking "wow does this cold hurt my fingers." Well, the wind chill was around -27 degees and let's just say my hands still burn a little under hot water from the slight frostbite. Never again will I make that mistake. I probably could have stayed another 10 minutes otherwise. The weather and mist also meant I couldn't successfully auto focus or see anything to manually focus since my LCD was fogged and wet. Luckily for me, and I guess this article now, infinity focus worked great. 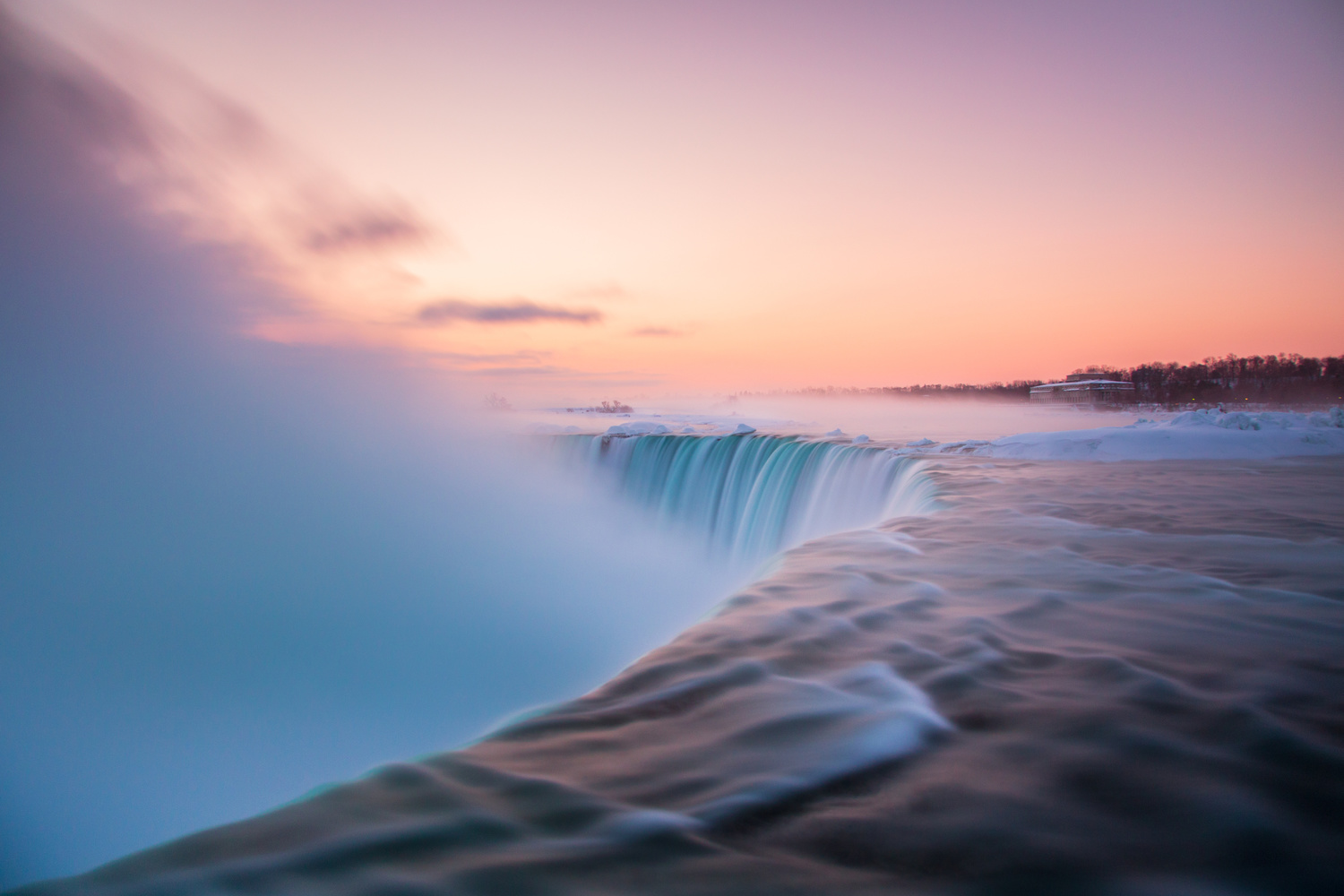 This is a 51 second exposure with ISO 400 24mm f/8.0 using a B+W 10-stop ND filter. It is titled "Its Roar Awoke the Sun" and was my first photo ever selected and featured on Google Chrome garnering over 32 million views.

I was not the only photographer to brave the elements on this crazy morning. There had to be 10 other photographers there. One of them, Christine Hess, I recognized from some news articles and a local Facebook group. I was a bit too nervous, embarrassed by the no gloves, and basically too cold to produce any small talk. I ended up being the last to get there and the first to leave because of my rookie mistake. Blowing hot air into my hands actually just made them worse since the condensation would immediately start to freeze.

One thing to try when shooting a sunrise is change compositions often. This may go against getting that one perfect shot you were looking for, but sometimes the shot you planned takes a distant second to some of your alternate ideas you try during a shoot. Long exposure is a funny thing once you get into it. Unlike a regular shoot where you may get a few hundred photos quickly, with long exposure photography you come home after shooting for a while and have 20 photos to work with since many of them are 60 seconds or more. A luxury I don't often have is a second body. Since I knew there was a chance this might be one of the more epic locations in these conditions I brought along the alpha camera in the household, my wife's trusty Canon 5D Mark III. This extra gear meant I was now able to capture multiple shots and compositions while the long exposures exposed.

Be sure to shoot in raw. Even if you prefer to use clean JPG files most of the time, capturing raw files can be the difference between a usable exposure and a throwaway missed shot. I call this one "The Ugly Duckling." 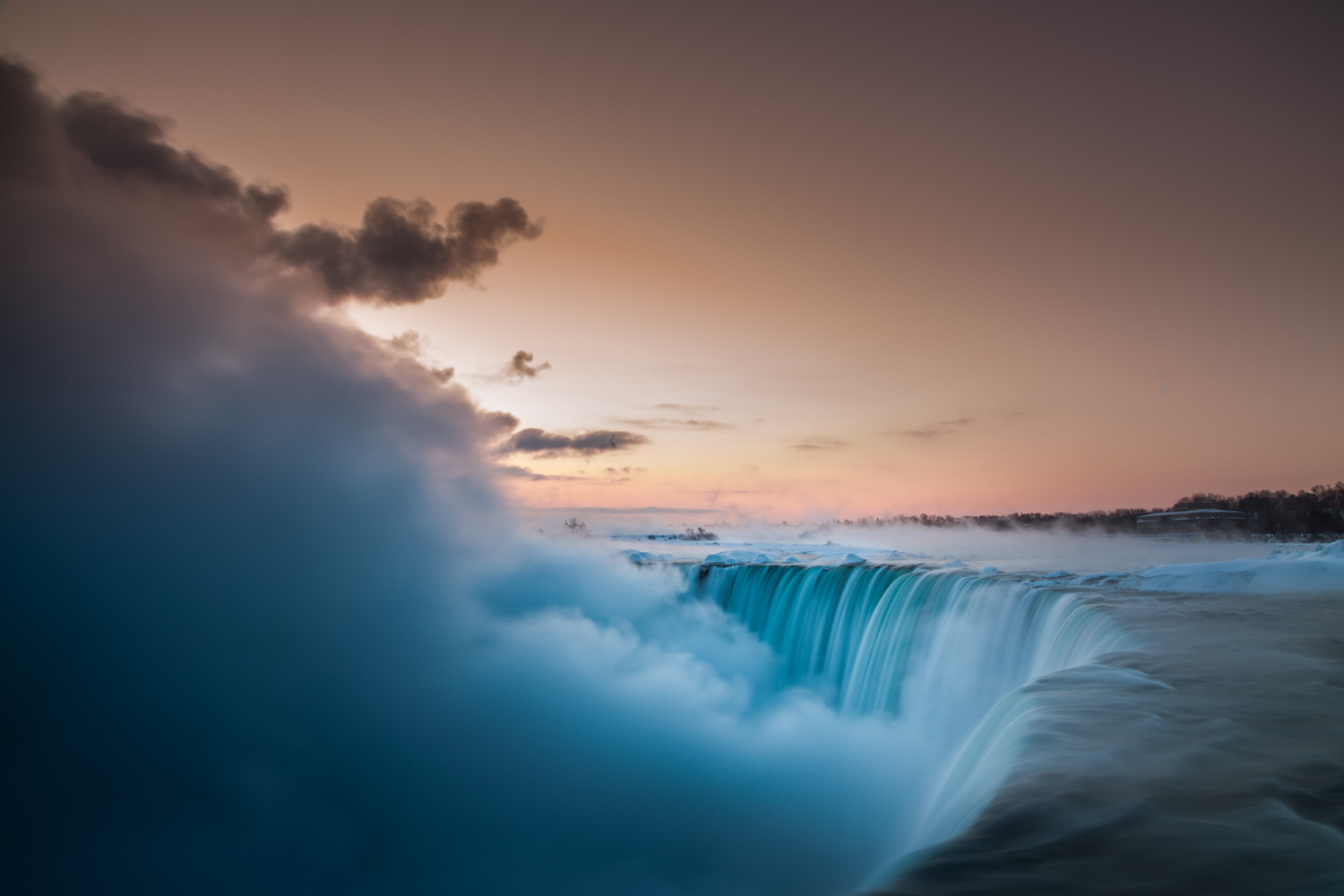 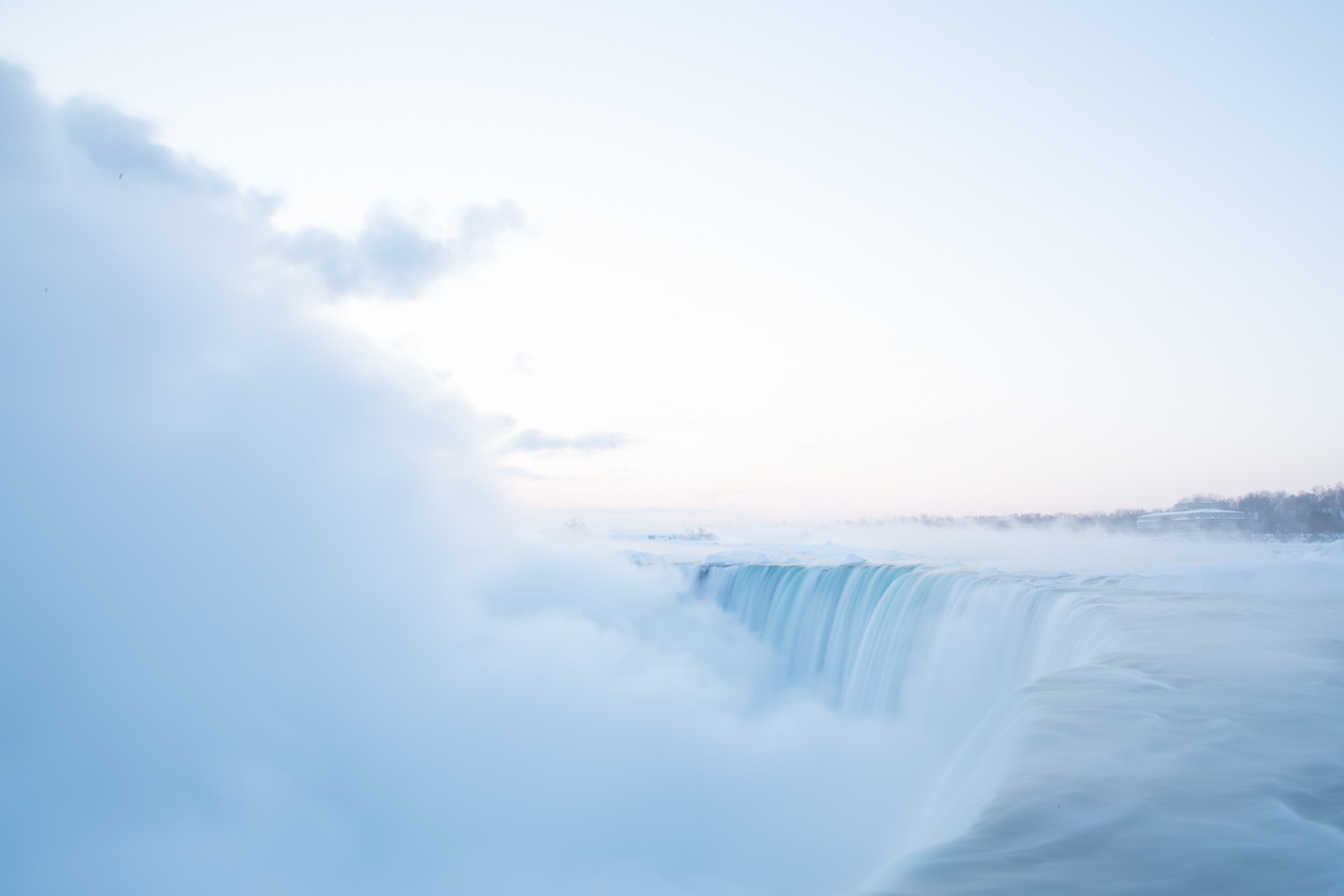 After the awesome sunrise, extreme cold, and adrenalin rush from the experience, it was back to the family for some more fun time. We checked out the Bird Kingdom just down the road and I got some more great shots like this amazing red-eyed bird: 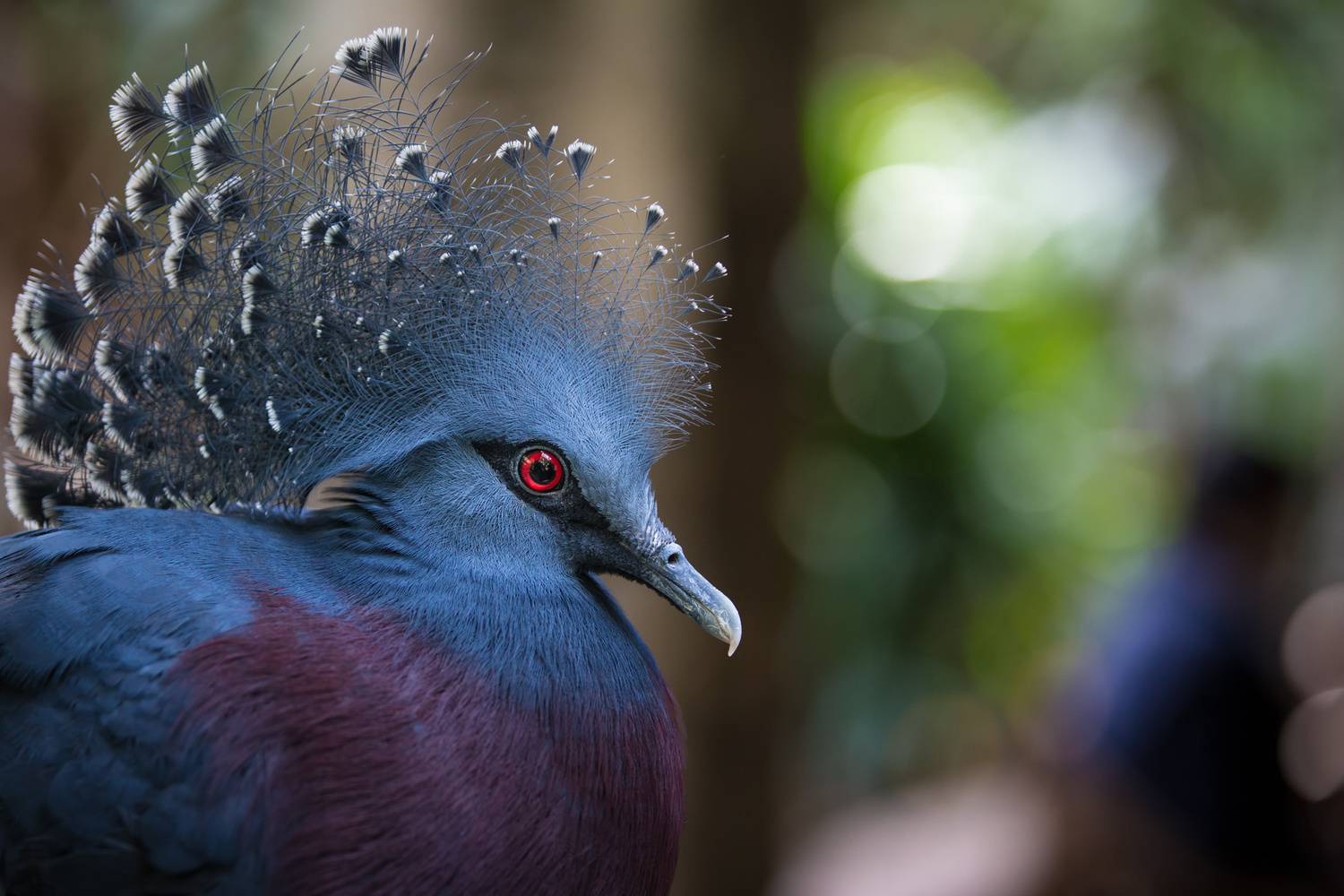 Needless to say Niagara Falls is an unbelievable display of nature's power that's well worth the visit. And there is a ton of fun stuff to do in the area. Just remember to bring gloves! I hope you'll come back next week for Part Three from a much warmer and relaxing beach in Cape Cod, and in case you missed it, here is Part One of this series.

Here are some more shots from the morning and day:

Since Niagara Falls is probably one of the more photographed locations on Earth, I'd love to see your shots. Please feel free to share a link or upload your favorite in the comments.

That's a spectacular before after edit shot of the falls. Thanks for sharing the post. I'm not much of a morning person, but with the right motivation...

Thanks so much, glad you liked.

I've been living and shooting in Niagara for about 50 years. It's beautiful in the winter, but you really do need gloves down in the park. You were lucky the mist was blowing away from you that day. It's great in the summer when you walk down that hill and the temperature drops 20 degrees. Winter, not so much. Living here and shooting for so long, I typically avoid the usual locations for photo shoots. You did a great job getting unique images from the high-traffic areas.

"Winter, not so much." lol :)
It is such a beautiful wonder to live by. Thanks so much for checking out the article and for the compliment!

Magnificent shots, Michael!
You must be very determined and stubborn to wake up early in the morning when it was freezing cold. But the views worth it, don't they? Music and nature are so inspiring one can't avoid being creative.
Is it https://aurorahdr.com you use for editing?
P.S. Trent is genius! Envy you ;)

Thank you! I actually don't get out to shoot that often so when I make plans to they usually stick :)
The main shot here was Lightroom + Nik Color Efex, the rest just Lightroom.

BTW I'll definitely write some articles on editing at some point!

I had a sunrise project in 2012 where I photographed the sunrise on the equinoxes and solstices over Columbia, South Carolina from the Lake Murray Dam. For winter, the wind was blowing off the lake towards the east and gusting to probably 45 MPH. There was no cloud cover with the wind blowing that fast. I was the only fool on the dam walkway that morning. Fortunately, my back was to the wind and I had the hood of my parka cinched down tight. I took off my mitten briefly to fire the shot and the motor drive advanced the film for the next shot.

That sounds crazy & awesome! Do you have the shots online anywhere? Always curious :)

Michael,
Below is the Flickr collection of my equinox/solstice project. 2012 was the year that I shot B&W film exclusively.
https://www.flickr.com/photos/ralphhightower/collections/72157629638041509/

Hi Michael - sunrises aren't my bag, I function better later in the day, so I'm more tuned into sunsets. But there are parallels of course - the intense contrasts in light, the need for grad NDs & so on. Looking through your photos I was struck by one thought. I set out to use sunsets as a "project", to practice on - to fine tune my handling of available light conditions - thinking I'd treat it a bit like Monet's haystacks, using the same subject over & over, but with differing lighting each time.

I quickly found that hey - it's not just the sunset itself - don't just look west - look around you - north, east, south - look up above you - and all of this seems to be ignored, when people sit on the beach, watching the sun disappear over the western horizon. There's a wealth of fascinating colours everywhere else at that time, too - all around you.

And you seem to have found something similar, in shooting sunrises around Niagara.

Maybe one night when I'm on my way home late, after a party, I'll give it a try with sunrises . . .