Why the Collapsible On-Light Reflector Is the Best Light Modifier for Speedlights.

When it comes to light modifiers, there are hundreds if not thousands of options: soft boxes, beauty dishes, grids, umbrellas, etc. After all is said and done, I truly think that I have finally found the perfect modifier.

The collapsible, on-light reflector, which is known by the brand name Flash Bender, is perfect in every way; it's cheap (cheaper if you don't go with Rogue specifically) weighs nothing, super versatile, and fits in your bag. It's a snoot, it's an umbrella, it's a beauty dish, it's a soft box, it's everything you need or want, including different colors of backdrops. I'm fully aware of how grandiose these claims are, so let me explain.

A Flash Bender is a small piece of fabric and nylon wrapped around some sort of plastic rod, designed to bounce light coming out of a speedlight away from it at a harsh angle, generally 90 degrees or less, unless you're using it like a snoot or flag, in which case it will fire straight out and just block the light from hitting behind it. Think of it like that little white card that pops out of your speed light, but a little tiny bit more gigantic, because it kind of is, plus some flexibility. The modifier isn't only a piece of fabric; there are a couple of flexible rods inside that allow you to control the shape of the fabric and hold it there, allowing you even finer control of your light.

An umbrella is a pretty messy lighting modifier. It's broad and just throws light everywhere, which is why I like the Flash Bender, because you can use it against a wall or ceiling to throw light absolutely everywhere from a specific direction, similar to an umbrella. You can also bring it away from your subject in a bit of a larger area and use it almost exactly like an umbrella. 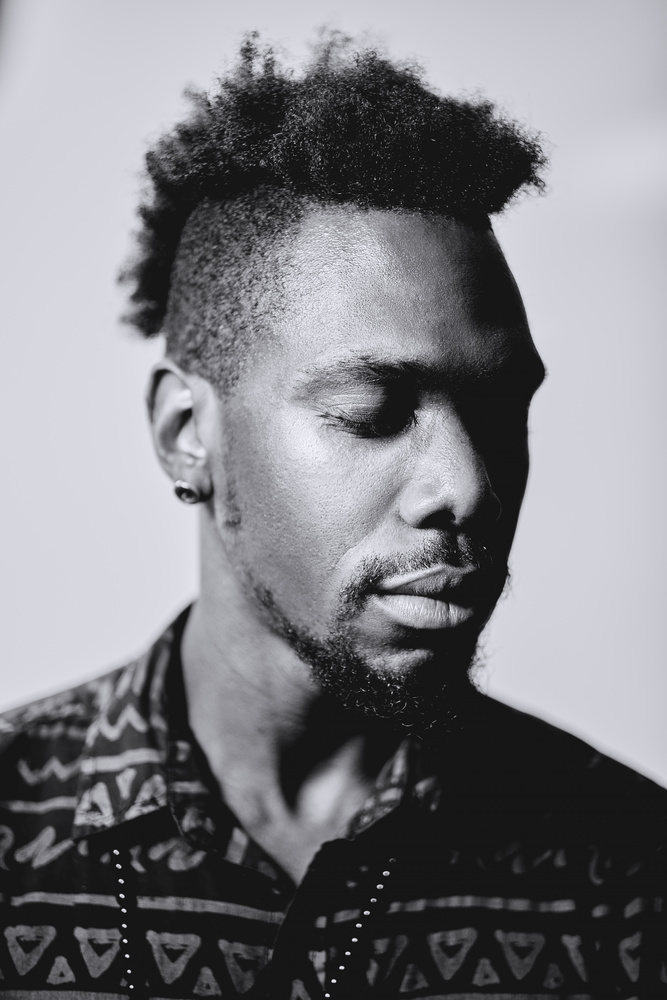 A shot utilizing a flash bender like an umbrella - camera left, open faced

The easiest way to get an umbrella look is to use the Flash Bender just flat on your speed light, pointing at 90 degrees, and point it towards your subject flat on, and it will throw light everywhere towards the subject. Is there a difference between this and a real umbrella? Of course! Is anyone going to notice it? Unlikely. You have more control using a Flash Bender compared to an umbrella, because light only comes out one side. It's like a reflective umbrella and a shoot-through umbrella had a baby.

Another reason I enjoy using a Flash Bender is that because of the wide spread of light and small shape, I can use it directly behind a subject to color my backgrounds any color I want. This gives a different feel than a traditional paper backdrop, as there is light coming off of it and bouncing onto the subject, which I personally quite enjoy. I use a lot of gels in my work, so that tiny little bit of light contamination, for me, is great! 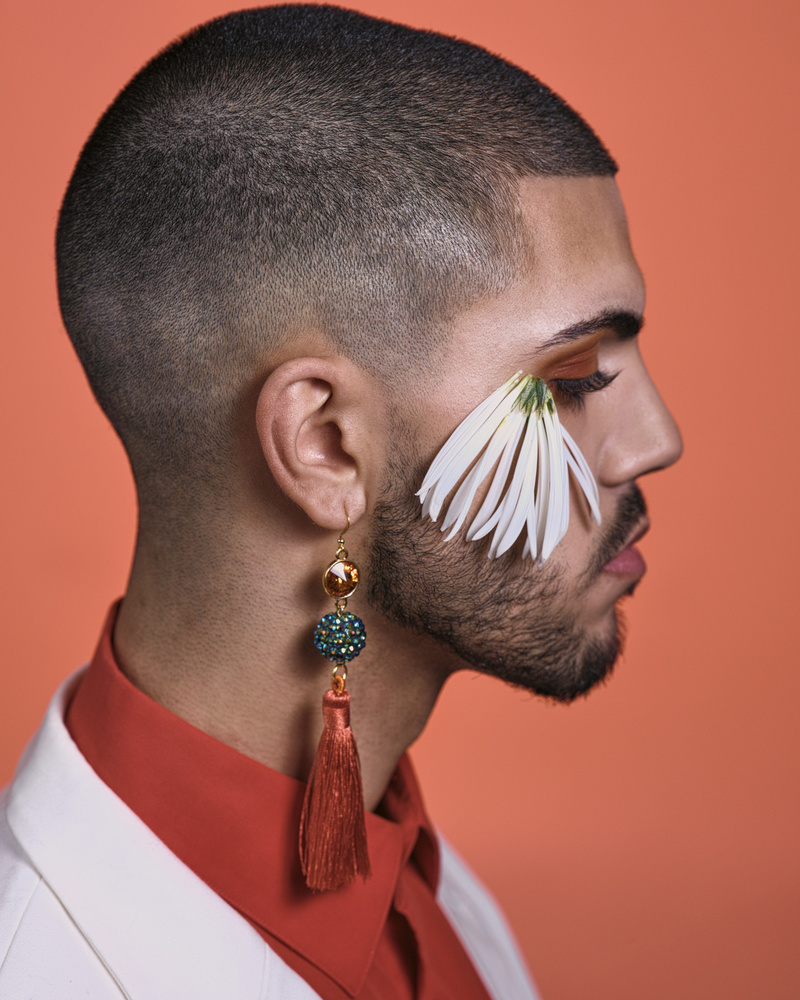 A shot I nabbed earlier this year, showcasing my use of a flashbender to change the colour of the background

The easiest way to change your background is to put the light as close to the subject and as far away from the background as you can, using it similarly to the umbrella example above, pointing the modifier straight up, but this time, directed at the wall. Because it is so small, you won't be able to see it in the shot behind the subject. Alternatively, you can place it just out of the shot and point it at the wall at an oblique angle.

As a snoot, the Flash Bender is not quite as perfect compared to its use as a background illuminator or umbrella. It creates what I call a "soft snoot," in which the edges of the snoot are rather fuzzy and ill-defined because of the fabric construction and white interior. That said, used right, it can become an even nicer light, in my opinion, by lighting up the face just right while falling off into darkness for the rest of the shot, allowing me to use the surrounding area for whatever I want. 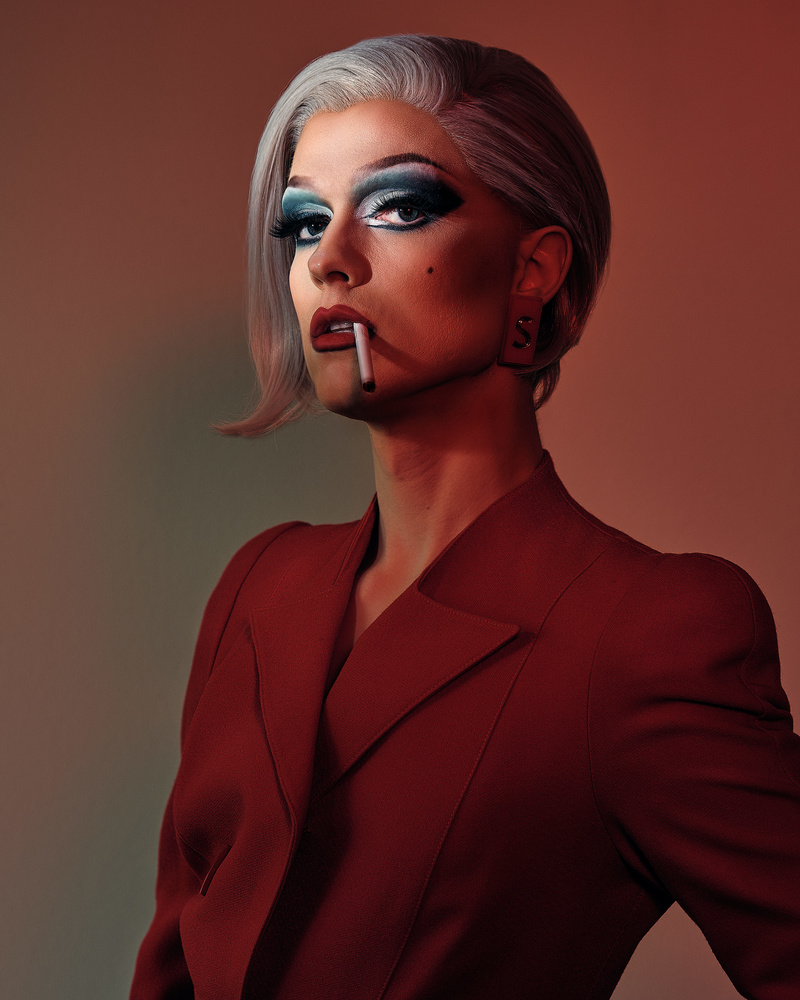 Toronto drag queen Silencia, being hit by a snoot on just her face

Because a Flash Bender is made out of flexible fabric, you can actually roll it up into a tube while still attached to the speedlight, causing an extremely easily controlled spot of light to hit your subject without looking too much like a stage light.

I am a massive fan of soft-hard light: light that creates defined, recognizable shapes but with soft edges, and a Flash Bender allows me to do this with the ability to give a directional, soft light with a large light surface area, creating that desirable soft-hard light that I enjoy so much. 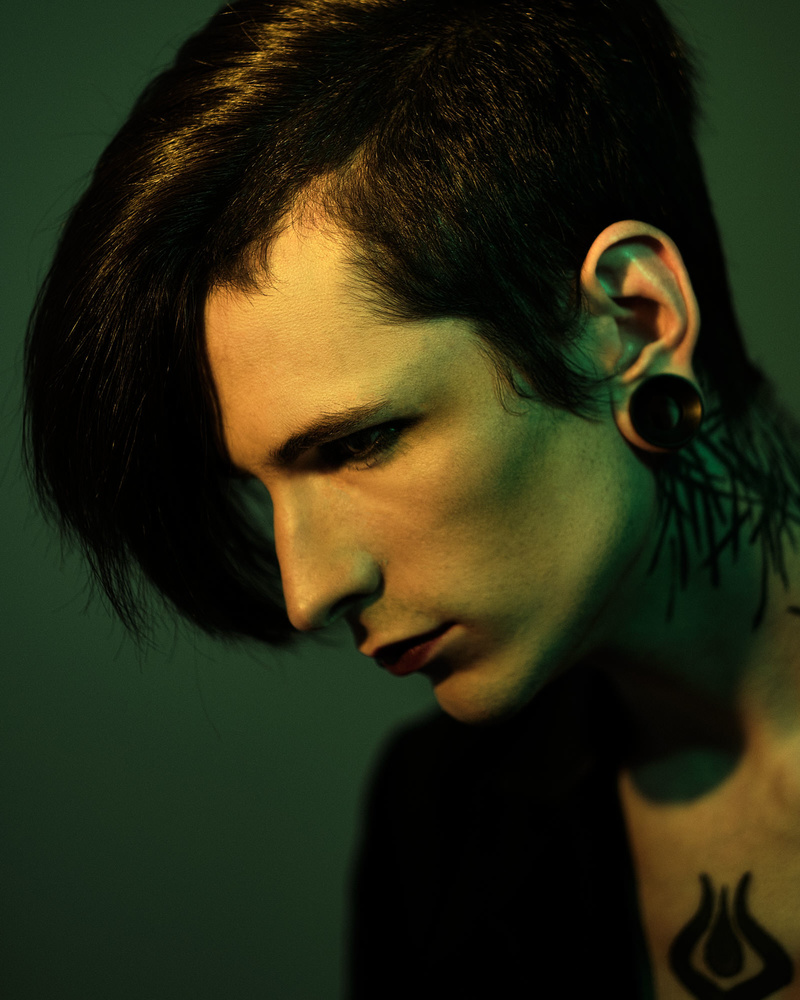 To get this soft/hard light look, you need the Flash Bender rather close to increase the relative size of the modifier, and point it at your subject, really in any way, and that will cause some great soft-edged shadows. In the above example, the Flash Bender was camera left and above the subject, pointed at about a 45-degree angle in order to maximize coverage and keep light spill to a minimum.

As you can see, the Flash Bender is incredibly versatile and a bit of a jack of all trades. While it may not be as ubiquitous as a Gary Fong Lightsphere, the fact that the light is directional means that it is all the more useful, and it has a place in almost every photographer's bag.

Speaking of the light sphere, I find that it has a habit of throwing light absolutely everywhere, in comparison to the Flash Bender, which will throw light in a specific direction. There are also add-ons to this, including a grid, etc., but I personally find those things overkill. The point of the Flash Bender is to be light and easy to use; I feel like using it with extra accessories defeats the purpose.

Have you ever used a Flash Bender? What did you think? Are you considering getting one?

Is it better than the Fstoppers' Flash Disc?

"better"? I couldn't say. My partner uses Flashbenders, mainly for bounce & fill with a speedlight on a stand at events, and loves them. For this, I just use 5"x7" bounce cards. I use knock-off 12", 16" and 24" Flash Discs for quickie portraits and event candids and love 'em. The 16" and 24" work well as soft boxes for key and fill on tight portraits. The 12" and 16" are great in my left hand for grip & grins.

Never used one. I use cheap chinese collapsible beauty dishes which you get for about $10.

I use a MagMod MagBounce, which does the job — at a higher price than the FlashBender — and I love the flexibility of the MagMod system.

I use the Flash Bender a lot especially in my event work, not so much in Lifestyle work but maybe I'll try to a little more and see what I get.

Very hand for events and 'walking around' type situations. Was the first modifier I bought (obviously unbranded).

I am done with Fstoppers. Really too much LGBT propaganda for me. Best of luck.

Inclusion is not propaganda.

because they have, what, two writers as a part of the writing team? (Maybe more, maybe less) or because I included a SINGLE photo of a drag queen?

You must be joking...Not once was LGBT mentioned in this article. Propaganda because of the image's subject matter? I hope you're not as fragile in real life as you appear to be due to a simple article on flash modifiers.

The phrase "The lady doth protest too much, methinks" springs too mind. I wonder what user-128252 is trying to hide???

I, for one, am happy for a break from the constant barrage of cheesecake.

Dude, there is no such thing as "The Best Light Modifier". There are different light modifiers which give you different results/effects. The whole article sounds like a straight up marketing brochure for Flash Bender, especially the last paragraph: "Have you ever used a Flash Bender? What did you think? Are you considering getting one?" I like Flash Bender and own one, but, dude, if you want to do an advertisement, do it honestly.

I personally don't own a rogue flashbender. I use the off-brand one

Regardless, my point is that your claim of "Collapsible On-Light Reflector is the best light modifier for speedlights" is just silly, to put it politely. Different types of modifier give you different effects/looks/results. What is "the best" would depends on the specific effect/look/result you want for a specific shot.

"An umbrella is a pretty messy lighting modifier," Really ? After thirty five years I better stop using them. Please share that helpful info with Platon so he can switch to a velcro bounce card on a speed light.

To be fair, standard umbrellas offer little control over spill, which is why, when I want to keep the key light off the background, I use a softbox that has a grid option, or I use a Paul C. Buff PLM parabolic umbrella that emits a much more collimated beam of light. This is handy in small spaces where there might not be much distance between subject and background.