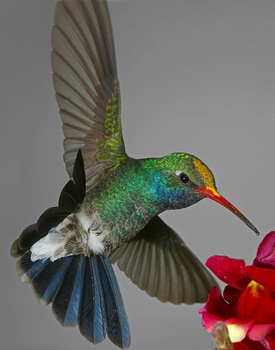 This is the first good shot that I got of a hummingbird, in spring of 2002. I used a 100mm macro lens and 2 canon 550ex flashes on a Canon D60 6mp crop sensor camera. The master flash had an extension cable that let me use it off camera, and the slave was on the other side of the camera. The flashes were set at the lowest power, for the fastest flash, to freeze wing motion. That's 1/128th of full power. Because of the low level of light, the flash duration is about 1/15000th of a second, and the flash must be very close to the bird, about a foot away, or perhaps a little more.I bought this specific gear to shoot hummingbirds, but of course I would also use it for everything, until I could afford more lenses.
The main reason I love this photo is the yellow pollen on his head, which illustrates his role as a pollinator. But I also was impressed that in the high resolution viewing you can see its orbital feathers. ("Eyelashes")