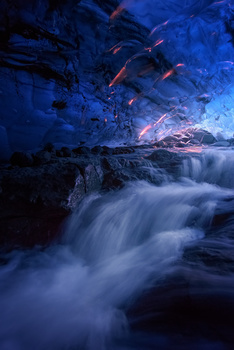 Last week I show you a photo that takes about a year and a half on my hard drive waiting to be published, some were surprised and there were some messages that I privately received about these delays; Well, today I bring you one that takes more than two years, from my third trip to Iceland with a good group of eight friends.
It is the materialization of a dream, perhaps not as intense as the observation and pictures of auroras borealis (which brushed and brushes today a certain obsessive compulsive feeling), if not of the ice caves and its interior; I had seen a lot of images, and in my head was the phrase "Hugo, you have to do it, do it as soon as possible, find a way to enter the fucking cave and enjoy immortalizing it", and as in November 2016, and After enjoying like a pig in a mud pond, I came with some shots of a small but beautiful ice cave with a river inside.
And the question may be, again, why after so long, why now? Why do you take so long to publish it? it is about how the creative process of the image is concise, I try to reduce that initial heat that we take after a good session, I release them, I make my discards and they stay there, I do not look at them again, until one day something does " click "in my head and move me to edit it and how to do it, obviously motivated by the mood of those moments, and here, again, the photograph falls back to the bottom of a folder until my feelings are that it is the time to publish it and have a reason for it.
What reason do I have? No other more than to see that this hobby is nothing more than a constant evolution, learning and enjoyment of it, with greater or lesser involvement; that it is not a competition between people, but with oneself, knowing that any goal, inside and outside of it, that is proposed, is within their reach and can continue to enjoy the path of learning from it, alone or accompanied