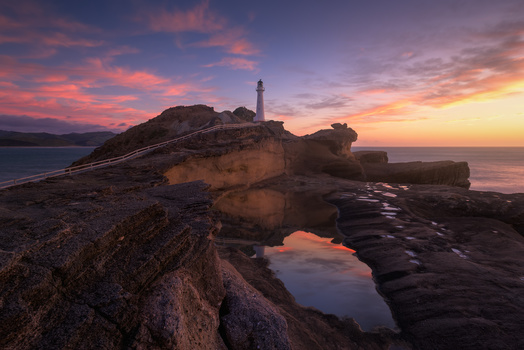 One of the nicest lighthouses I could see on the North Island of New Zealand was this, the lighthouse at Castlepoint.
We arrived the previous day, and parked near it to spend the night there; I remember that the wind was so strong that I was not allowed to go to the lighthouse at night, even when it was completely clear and with an exceptional orientation to try to get the arch of the Milky Way, but we barely stayed on our feet so the tripod I would not resist.
The next day do not hesitate to go up for the sunrise and enjoy what you see on the screen; I wanted to flee from the common site that I had seen for this lighthouse, which is behind it on some stairs and I began to move along the cliff looking for a composition where the lighthouse had presence with a beautiful close-up.
This was the result and I hope you like it