The Healing Power of Photography for Earthquake Victims

On the tails of tragedy, one Denver nonprofit has focused on using photography as a valuable tool for healing. Almost a year to the day, terrible earthquakes struck Nepal. Eighteen individuals were given cameras as a way to cope with the dramatic change in their lives. The images that were produced are beautiful and poignant reminders of the resiliency of life. It is the core of photography, intended as a cathartic expression of loving memories and an emotional foundation for future reflection.

Take away all the commotion from photography. Remove the intuitive gear, toss out the high-dollar strobes, and nix the time-consuming image retouching; photography, at its base level, is the truest artistic perception of reality. From a pair of honest eyes, there is no other medium with the power to capture and interpret the world. This is precisely why Picture Me Here incorporates photography as a coping mechanism for victims of worldwide tragedies. After the immediate disaster relief has packed up and left town, victims are left with a hole to fill, both physically and mentally. Using art, Picture Me Here has the power to help victims rebuild in the face of insurmountable tragedy and loss. The power of a photograph to eternalize memories is the founding principle of the movement. Many images, captured post-displacement, become the foundation of building a future.

Almost one year ago today, late on an April morning in Nepal, the ground shook off one of the most deadly and damaging earthquakes in Nepalese history. The earth-grinding quake spread across the country, killing over 8,000 people and injuring over 20,000. In 30 seconds, the shake would decimate houses and flatten entire villages, indefinitely scarring the peaceful landscape. Nepal was left in ruin with damage too grand to comprehend; many lives, if kept, changed forever. 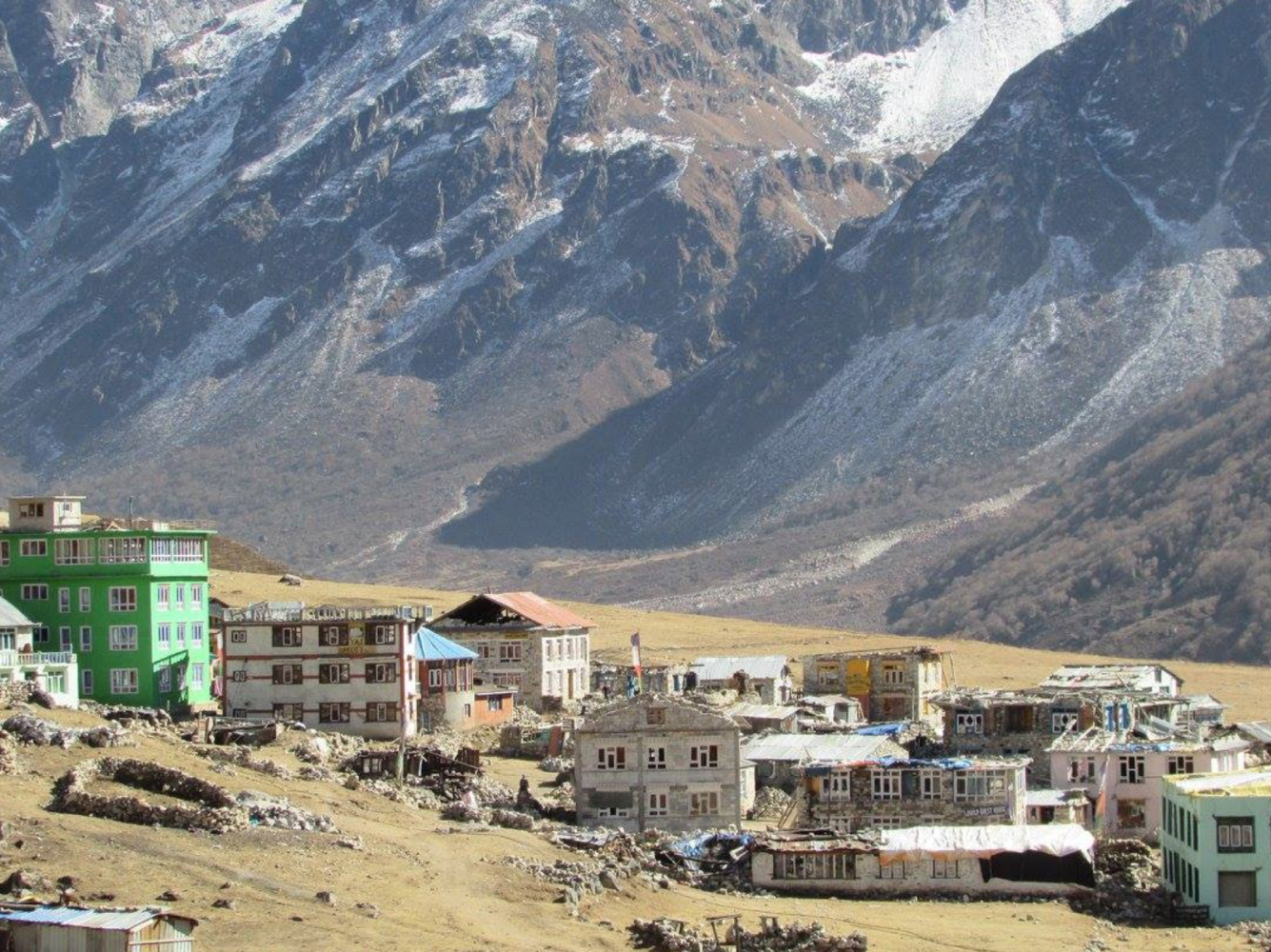 The destruction of Kyanjin Gumba after the earthquake. Photo by Tsemay Tamang.

The village of Langtang Valley was struck especially hard. One survivor, Pasang Tamang, recounts the experience. Early in the morning on April 25, beneath the clear skies that blanketed Langtang Valley, Tamang woke from his home for his daily hike to the hotel he ran at Kyanjin Gompa. Among pleading calls from his family: "You didn't sleep all night. Stay here and rest," Pasang pushed on to tend to the hotel guests. Early on into the afternoon, while he prepared lunch, the ground began to shake. Looking back toward where his home stood, he noticed "one by one, stones from my house started falling." The ground was violently moving; it was an earthquake. But then the shaking changed; the violent, teeth-clattering shake was intersected by an ominous rumble. Under the towering eyes of the tallest peaks in the world, the valley produced a cloud of ice, snow, and rock with a force greater than an atomic bomb. "I thought I would die," he says. The avalanche ripped through Langtang Valley. The relentless cloud tore apart the beautiful village, taking with it over 600 lives. 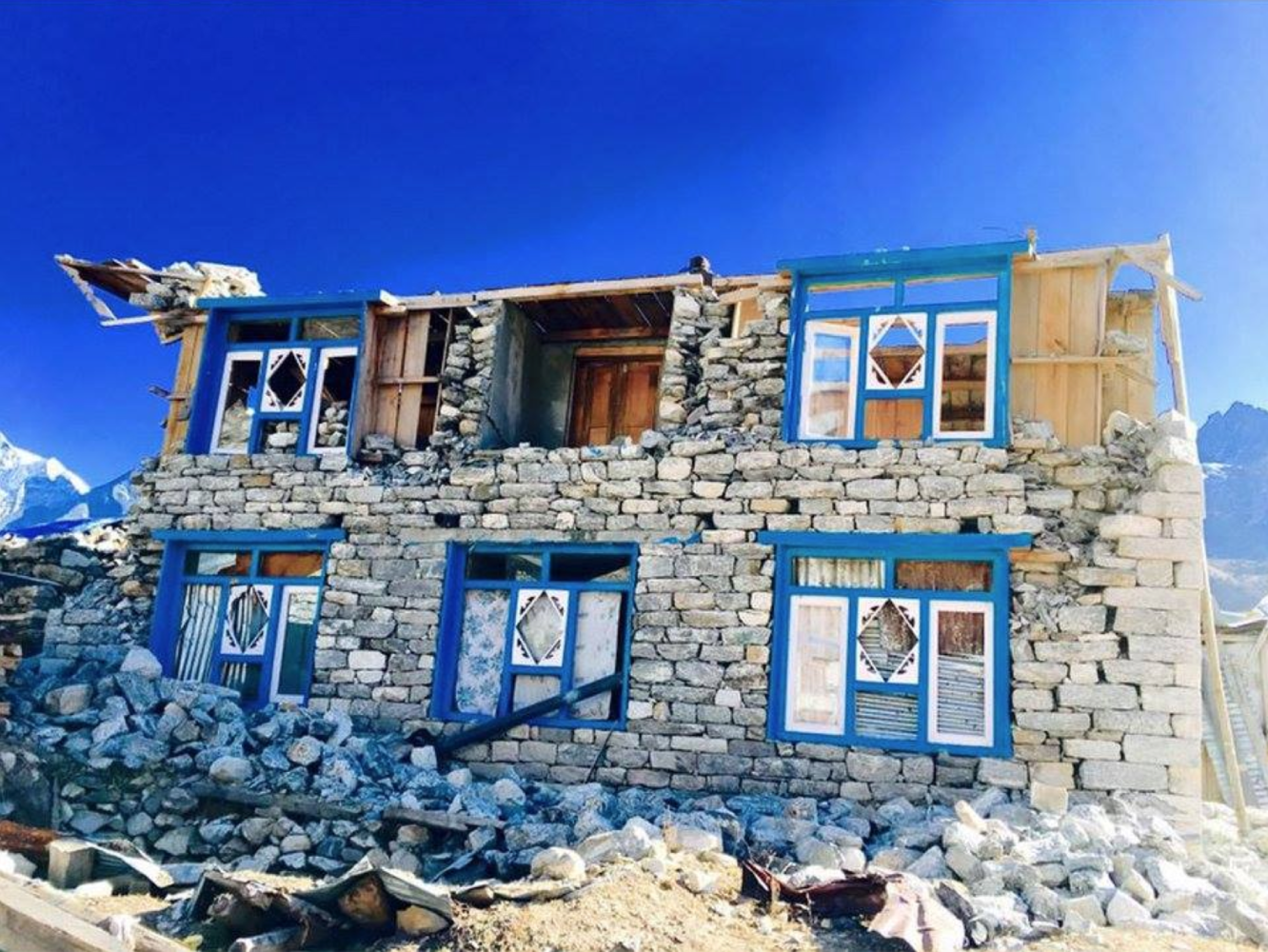 House that has been providing service to tourists visiting Langtang that has been totally destroyed after the earthquake. Photo by Pasang Tamang.

Nepal was tragically crushed, Langtang Valley was hit harder than any other region in the country. Foreign trekkers and Nepalis still remain unaccounted for. Following the tragedy, the survivors were forced into living temporarily in Kathmandu or faced with rebuilding their villages in the valley. Many victims, displaced from their homes — refugees — were left to cope with loss. During the process of rebuilding, there is a lot of time. Fragmented families wait out the stark Nepalese winter with bleak hopes for the future. It was during this time Picture Me Here picked up with the therapeutic support of photography and writing. Early on, PMH understood the power of rebuilding emotional foundation through memories — memories best accessed through skills in photography.

According to Picture Me Here Director Brigid McAuliffe, photography "gives a sense of identity and preserves memory despite a physical home, person, place, or artifact being lost." The Langtangpa were left with nothing: a village destroyed, families lost. PMH's photographic project helps rebuild from the single strand of a memory. "The Langtang Photo Album project (and the Langtang Memory Project) has been collecting photographs from participants' past, in addition to the new photographs they are taking to record their daily lives post-earthquake," explains McAuliffe. "Without photographs after such a disaster where so much was lost physically, all would eventually be forgotten as years and generations pass."

Photography is a unique medium, where language and educational barriers no longer matter. It’s a universal language that is accessible to all. Anyone can learn how to photograph, and suddenly, they have a powerful way to express themselves, record their lives and their surroundings, and freeze a moment in time. Photography is also easy to share and use as a tool to raise awareness and support for social and environmental issues." 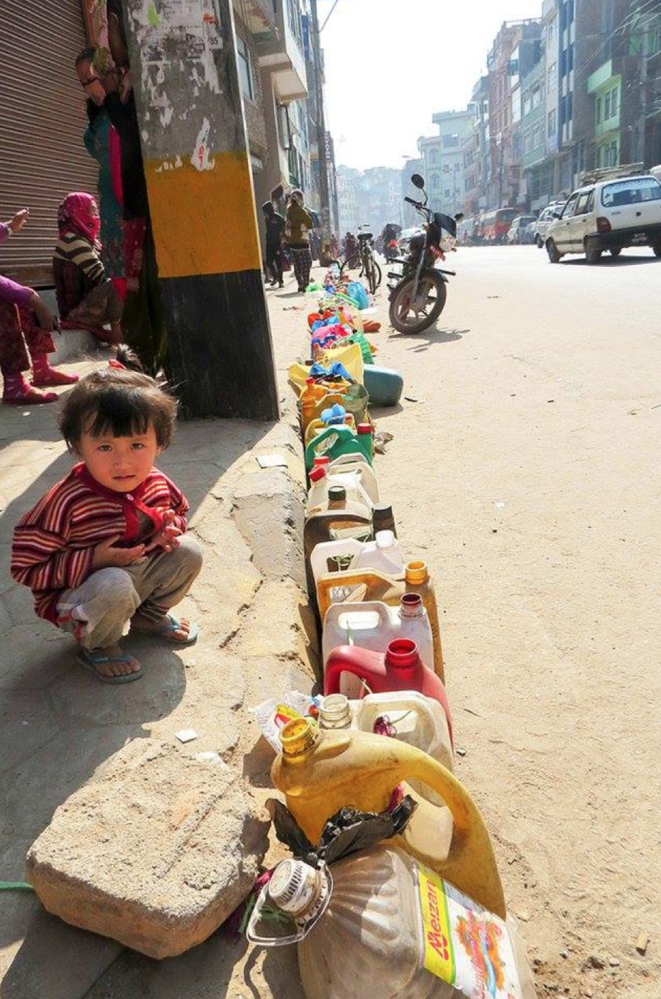 "It’s been an extra hard winter due to the fuel crisis. This is a line waiting for cooking fuel. People are cutting down trees as an alternative. There are also long lines for driving fuel and heating fuel. We wait for days." Photo by Lhakpa Tamang Jangba. 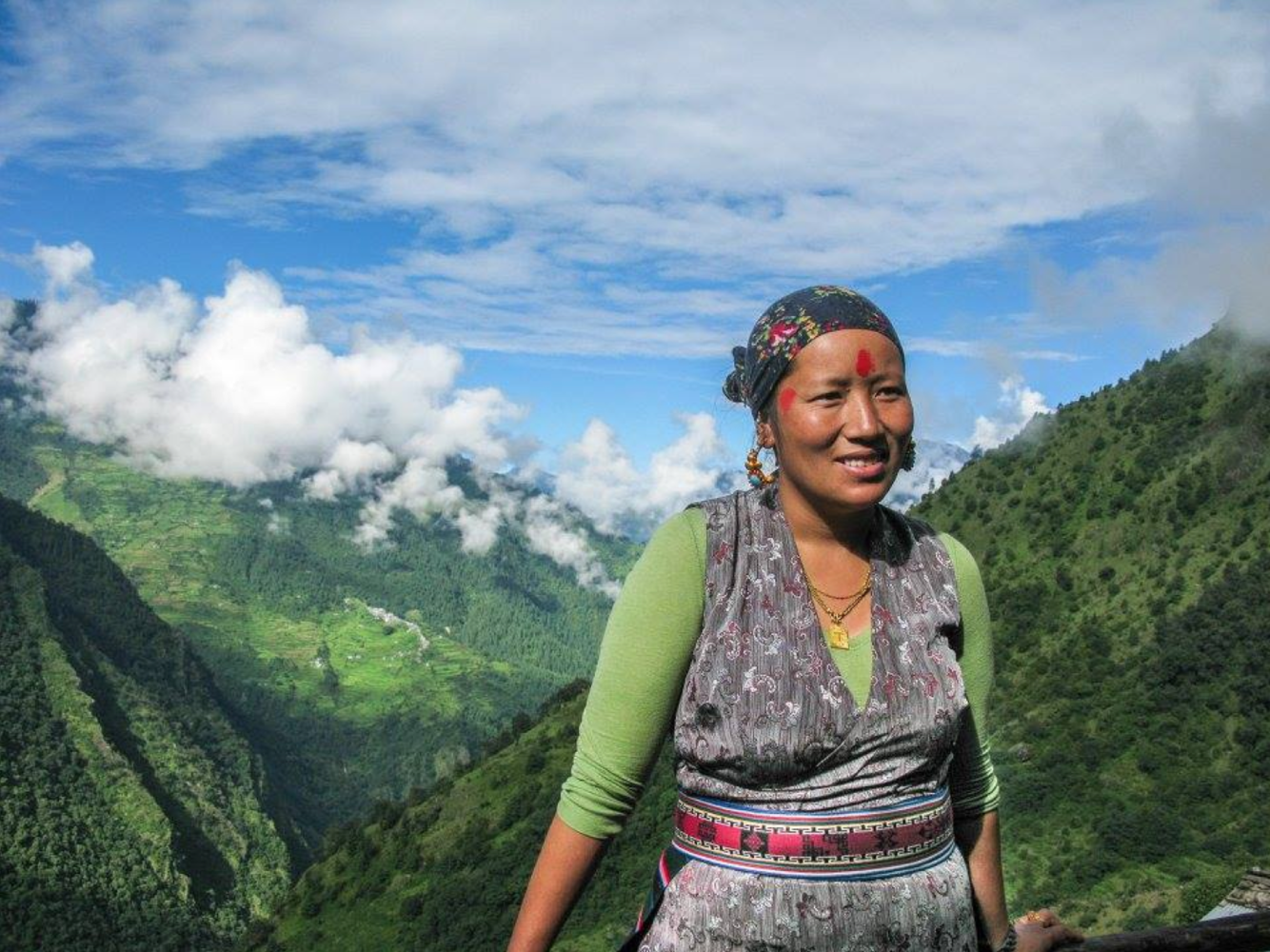 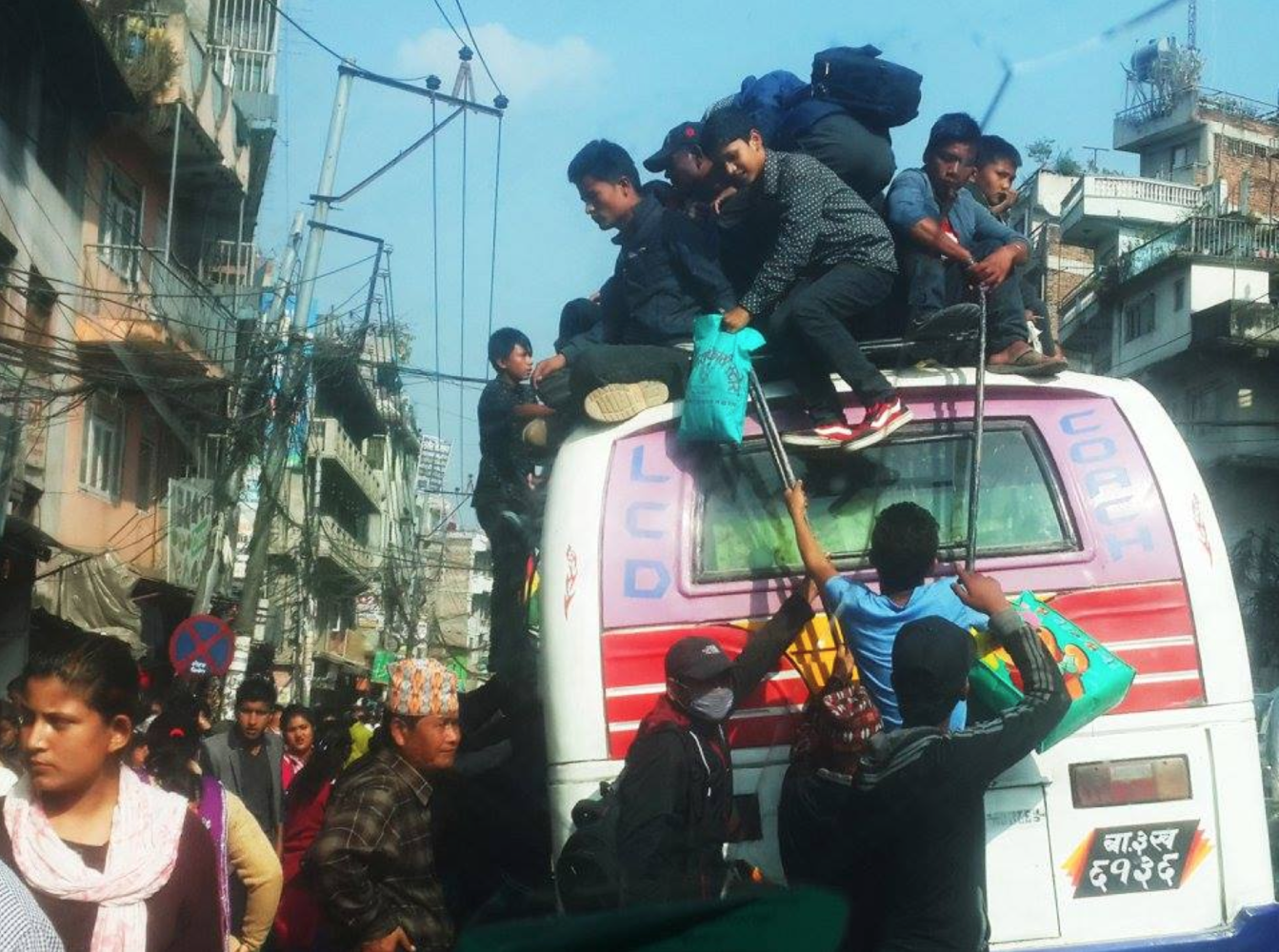 The busses are extra crowded during the fuel crisis. This picture was taken in Chahabil Chowk in Kathmandu City. A fuel shortage in Nepal has hit public transportation hard, leading to fewer vehicles in service. As a result, those that are running are more likely to carry more riders than they should. Therefore, riders are forced to travel like this, bearing the risk on their own. As a result, it often leads to accidents. Photo by Tsemay Tamang. 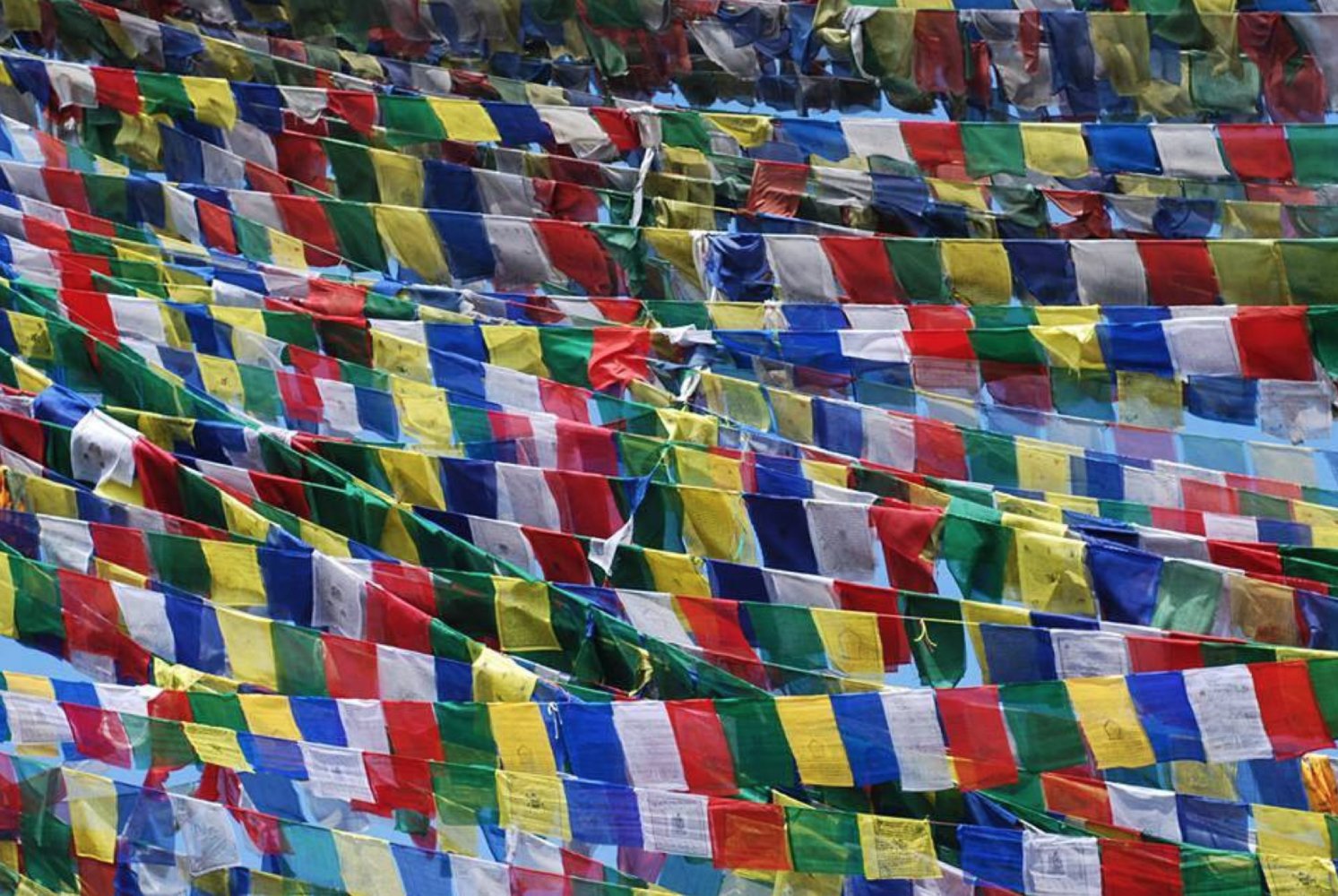 Taken at one of the most sacred Buddhist sites in Nepal, Namo Buddha. Photo by Tsemay Tamang. 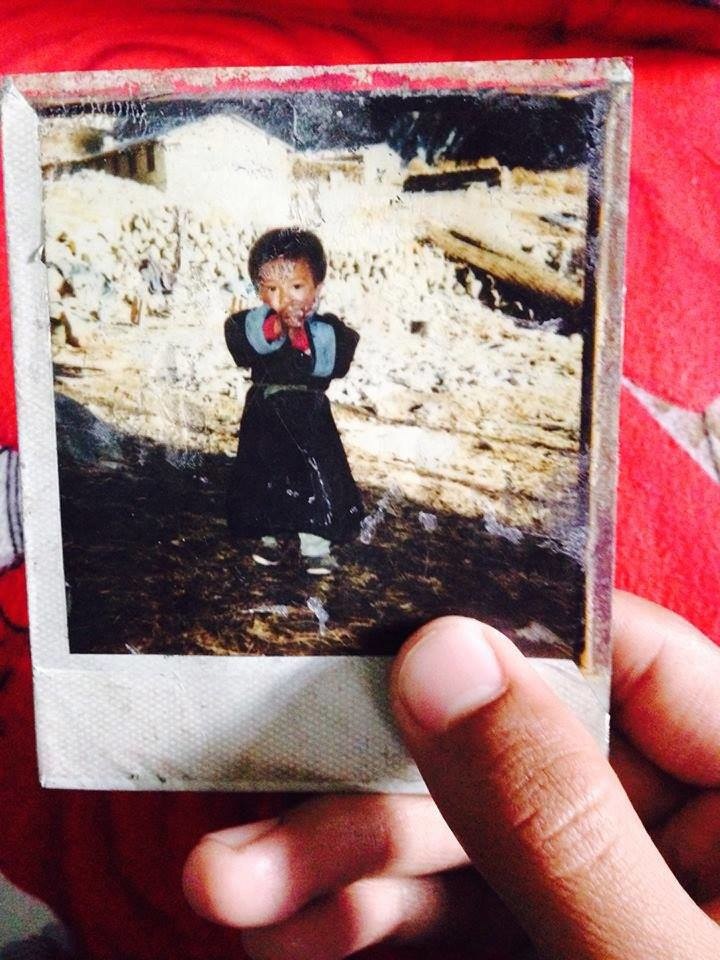 Photographic artifact found, representing the power of The Langtang Memory Project: "My mom told me it was clicked by a Japanese tourist in the evening time as I was returning from school. Jangbu’s mother passed away in the April 2015 earthquake." - Tsering Jangbu Changnyempa.

The vibrant images represent promise. Many participants flourish in their understanding and perception of photography. They grow in their ability to artistically reflect, they manifest the power to frame a memory and build a future while remembering the past. "Some participants are more active than others," reflected McAuliffe. "Most have been active in sharing their photographs and writing on our Facebook group Langtang Photo Album." Uploading images regularly with captions and comments gives participants an outlet for expression. "They are excited to see the interest and support their photography and writing is generating locally and internationally."

Picture Me Here continues to make strides with their humanitarian efforts, using photography as a way to link the past with the future. McAuliffe encourages individuals interested in helping to visit the website. "Access to cameras is a big hurdle since we strive to give all participants a camera to keep" she explains. Donating cameras is a great way to participate, continuing the life of aging cameras in the hands of those eager to build memories and learn about photography. Picture Me Here encourages interested photographers to reach out and get involved both locally and abroad. Workshop teachers and volunteers are needed to carry on the project.

In the face of such tragedy, Picture Me Here and the Langtang Photo Project gave the Langtangpa some power to express themselves. The power of photography is staggering; it fostered connections between people and enabled victims to record this intense period of their lives.

via [Picture Me Here and NPR]

fantastic article Jason, I went to Nepal 5 days after the Earthquake to shoot parts of a documentary on natural disasters, it was absolutely devastating, I was there when the second earthquake hit a few days later. Luckily we were on an airfield in open space at the time. The amount of houses and beautiful, century old temples that got destroyed and severely damaged was just shocking. It was great to see though how much help came into the country straight away through various organisations from all over the world but unfortunately much much more is needed to help these people, especially in the more remote regions.