A photo retoucher and VICE have been subjected to strong criticism after it emerged that mugshots of victims of the Khmer Rouge regime were manipulated to make it appear as though they were smiling.

VICE published an interview with artist Matt Loughrey on April 9 in which he discussed his recent work colorizing images from an archive of photographs of genocide victims, documented as they arrived at the S-21 Tuol Sleng Prison in the late 1970s. Many were subjected to torture before being murdered.

The article (now removed) suggested that the changes to the images were at the request of relatives, with Loughrey alleged to have claimed in a social media message that “The response to the project has been so positive.”

The National Cambodian Heritage Museum issued a statement shortly after the publication of the article asking for it to be removed. “We do not endorse those that seek to profit and benefit from the violent and lived traumas of our past and current history,” it wrote, adding that “Minimizing the pain and trauma of our community from those who are not connected to the experience is not only revising and erasing history, it’s a violent act.”

Cambodia’s Ministry of Culture and Fine Arts later issued a statement repeating calls for the article to be taken down. 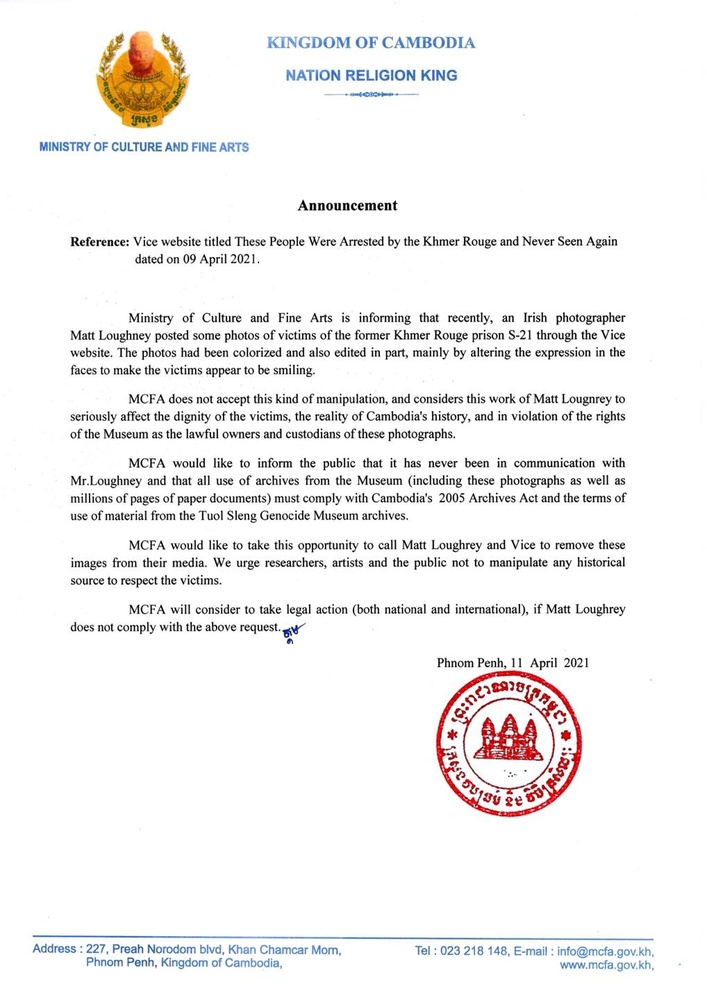 VICE removed the article, replacing it with a statement:

On Friday April 9th, VICE Asia published an interview with Matt Loughrey, an artist working to restore and colorize images from Security Prison 21 in Phnom Penh, Cambodia, which was used by the Khmer Rouge regime from 1975 until its fall in 1979. The article included photographs of Khmer Rouge victims that Loughrey manipulated beyond colorization. The story did not meet the editorial standards of VICE and has been removed. We regret the error and will investigate how this failure of the editorial process occurred.

In the original VICE article, Loughrey explained that he was initially contacted by “a person in Cambodia” and asked to edit three images. He then saw the size of the publicly accessible archive and the interview suggests that he then took it upon himself to download and edit more photographs. “The more I looked into it and the more images I saw, I thought, well, this has to be done,” Loughrey was quoted as saying.

Loughrey responded to emails on April 11 and asked to speak off the record. When asked if he colorized images and added smiles to further images, he did not reply. He has not responded to any further enquiries.

Following the backlash to the edited photographs, the Auschwitz Memorial and Museum contacted Loughrey to request that he delete an animation of a Holocaust victim that Loughrey had published to his Instagram. According to the museum, Loughrey refused, though the post has since been removed, potentially following reports from other Instagram users.

We fully support @TuolSlengMuseum. We have approached Matt Loughrey & requested the removal of an animation he made out of a b&w image of Czesława Kwoka from @Instagram. Such manipulation of sources is disturbing, painful & disrespectful to the memory of the victims. He refused. https://t.co/CGcgfPyvTZ pic.twitter.com/2DsXqVqxNT 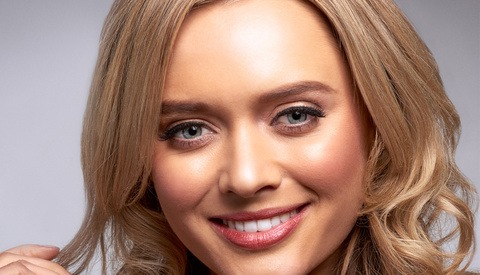 Opinion / September 18, 2017
Why Less Is More for Portrait Retouching
Log in or register to post comments
8 Comments

what's next. making them talk with AI?

Yeah this is absolutely short-sited and wrong from Matt Loughrey.

"the changes to the images were at the request of relatives"... “The response to the project has been so positive.”

This is how photography dies.

If a relative wants a retouched photo, it should be for private consumption only.

"The article (now removed) suggested that the changes to the images were at the request of relatives", this quote sounds a little different than actually being requested by relatives..... I seriously doubt any relative of a person that was tortured and then murdered by the Khmer Rouge would want a photo the Khmer Rouge took while in the "prison" would ask for a smile to be put on their faces.... The reference article clearly states "This was done without the consent of family members who lost loved ones in the prison". I think this person Matt is disturbed.... I looked at his IG and website... it's very creepy...

He's also had run-ins with the Auschwitz Memorial for animating Holocaust victims...

I wish I could say this is unbelievable. Matt Loughrey disappoints.

It's hilarious, but also very offensive (which is also why it's hilarious). I wonder why he did it.