Take a look at these inspirational photographs from Justin Bettman's Dark series. I have been following Justin for awhile now and love the work he produces. What i really admire about his images are the stories they tell. It seems a lot of photographers go for similar styles and the photography starts to blend together and become homogeneous, Justin definitely breaks that mold. I was able to talk to Justin about about his Dark series and what all goes into producing some of these astounding photos. Go to Justin's website to view more of his work.

JB: I had a clothing company when I was in high school that sponsored bands so I had to take pictures of the bands wearing my clothes. Soon I realized I liked shooting bands (and getting into concerts for free) more than running a clothing company so I started pursuing photography more seriously.

Where did you get the inspiration/idea to start the dark series?

JB: For a while I was shooting really bright, composited commercial work and I wanted to try doing the exact opposite. It didn't start as a series, originally it was just one concept I had for a photograph, and then slowly my style evolved and I had a cohesive body of dark work. I think the subject matter in most of the photos comes from how I grew up in the suburbs of San Francisco and my cynical view on the American Dream.

Your scenes provoke a lot of emotion throughout the image yet can be left up for interpretation, what do you want your viewers to get out of your images?

JB: When going into a shoot, I have a clear idea of what I am trying to achieve. However, I intentionally leave the shots open ended so each viewer can take out of it what they want. I think there is a fine balance of subtly leading the viewer to the story you've created without being too overt.

You have a very theatrical/ cinematic feel to your images that makes your style unique, what gives you inspiration for each image and how do you turn that into a finished product?

JB: I typically get concepts for photographs when I run. I feel that it's the perfect time to think about shoots because that's when I often run passed new locations that inspire me. It's also a great time because I am seeing stories all around me as I pass by people and get a two second snapshot of their lives. I try to always run different routes in different neighborhoods to constantly change the setting.

Once you have an idea/concept, how much planning does it usually take for you to complete the images, do you usually scout locations and think of props before hand, do you use models or just find people wanting to participate.

JB: I’d say that I am as much a producer as a photographer; every shoot I do, I produce on my own. Getting permission to shoot, props, wardrobe, assistants, the proper gear, and casting are definitely time consuming but it’s all part of the process. For instance, had the red house shot been done in a new mansion, the feeling of the photo would be drastically different and I don’t think I would’ve evoked the same emotion. But to tie back to the question, I'd say I spend much more time on execution than I do on planning shoot ideas. I tend to use actors instead of models since I generally try to create stories and actors tend to be better for that.

They all seem to be around that twilight time, that must leave you roughly 30 minutes to execute your vision. What all goes into the day of the shoot? How long does it take to compose your sets, set up lighting, and convey your vision to your subjects? Do you have assistants?

JB: Most of these shots are shot during twilight or when its nighttime. As you can tell with the cinematic feel, I use lots of lighting. I will often spend the majority of the day lighting, anywhere from 4-8 hours for one photograph. And as you've pointed out, there's only a short time period to get the shot I want, so I have to be all set with the lighting well before that time period to actually take the shot. I use assistants or else I don’t think I would be able to shoot on such a large scale. Sometimes I’ll have up to 20 people on set.

Your attention to detail with how you light your subjects is awesome, can you talk a little bit about your lighting process and how you use it to set your moods?

JB: I think lighting is the reason my photographs look the way they do. People often ask how I photoshop my photos to look the way they do but in all honesty, it’s all in the lighting. On a shoot, I’ll use anywhere from 3-10 strobes. When I'm lighting a shoot, I start out by lighting one subject at a time until everyone is lit how I want and then I’ll add lights to illuminate the rest of the set. When using so much external lighting, its really important to make sure the light looks like they’re coming from justified light sources or the photo will just look tacky. This means its important to use gels to "sell" the light source. For instance, if you're going to use a light to emulate a street light, you'll want to put a CTO gel on the light head since street lights on generally orange. I usually try shooting at around 70 mm so there isn’t any lens distortion and the image is more compressed. Also, recently I've started using my hazer more often and I'm going to continue incorporating it into my shots. I like the soft and filled in look it gives to the shots. 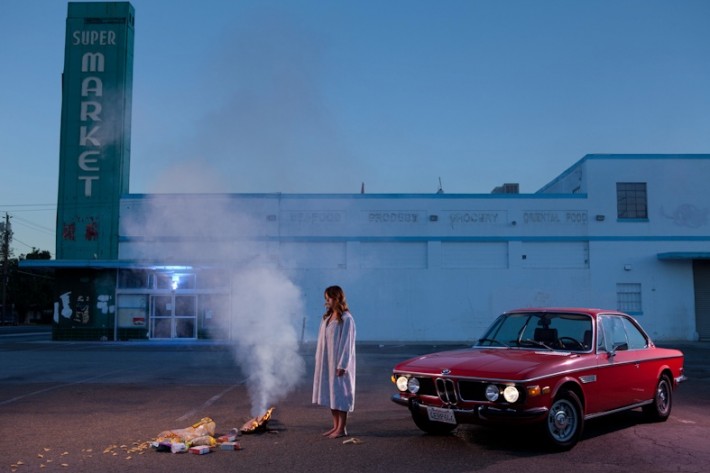 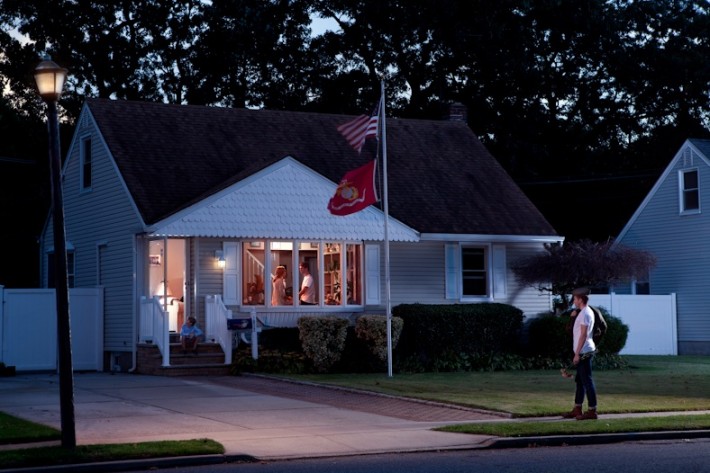 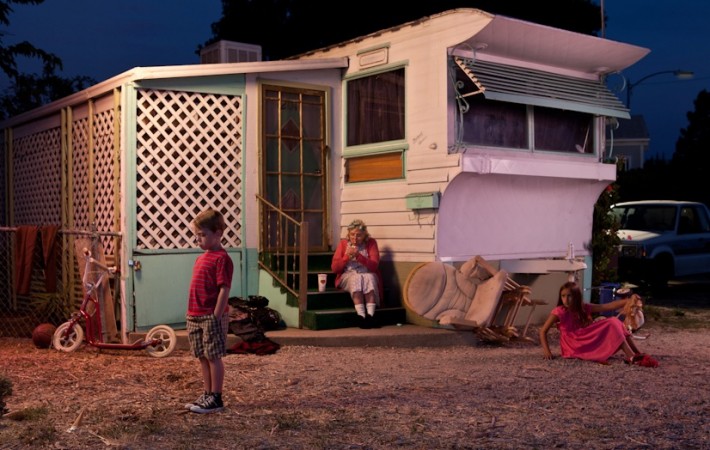 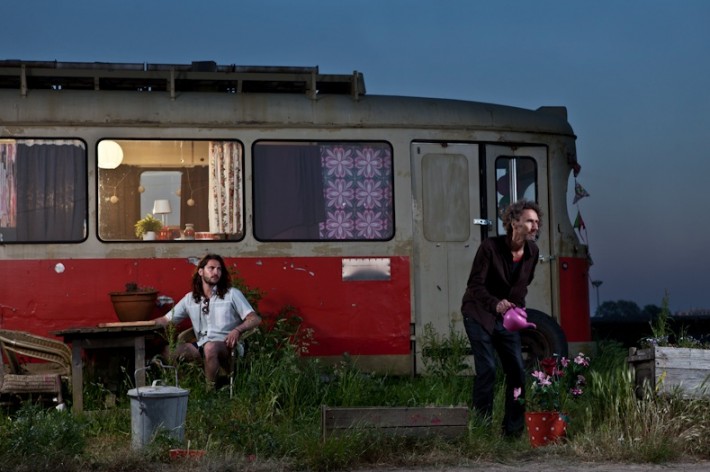 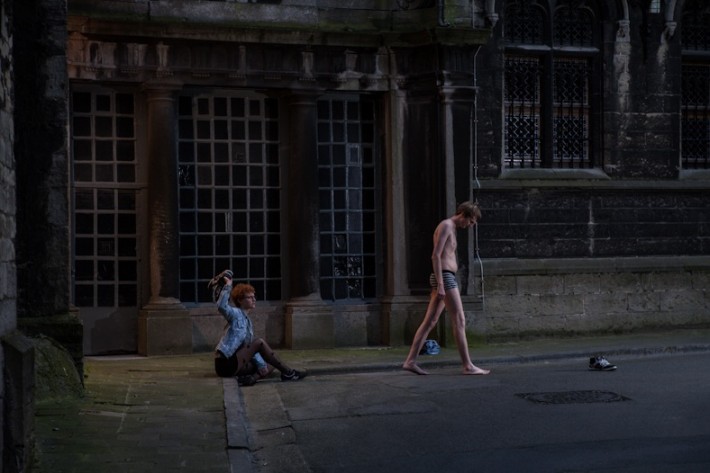 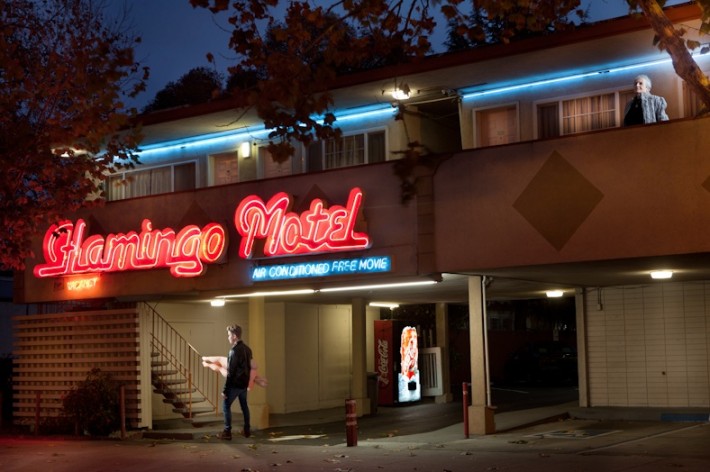 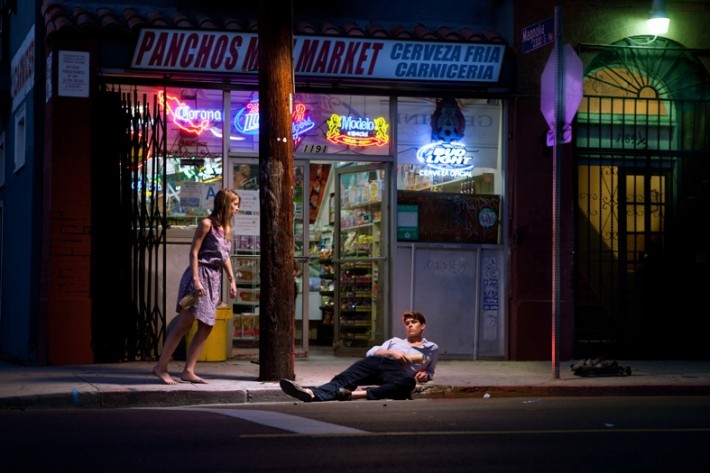 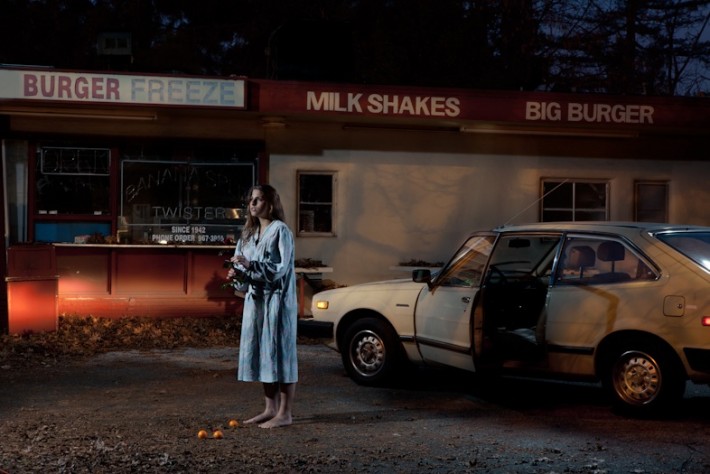 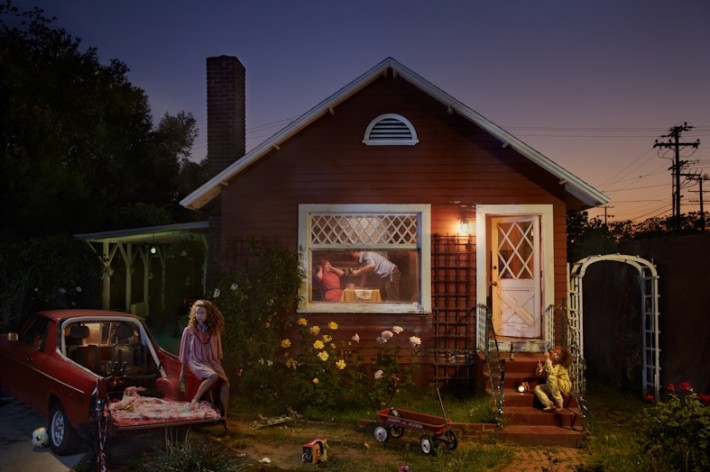 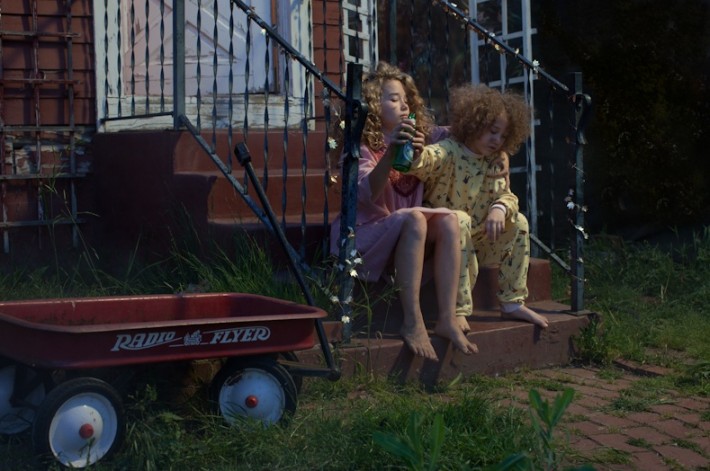 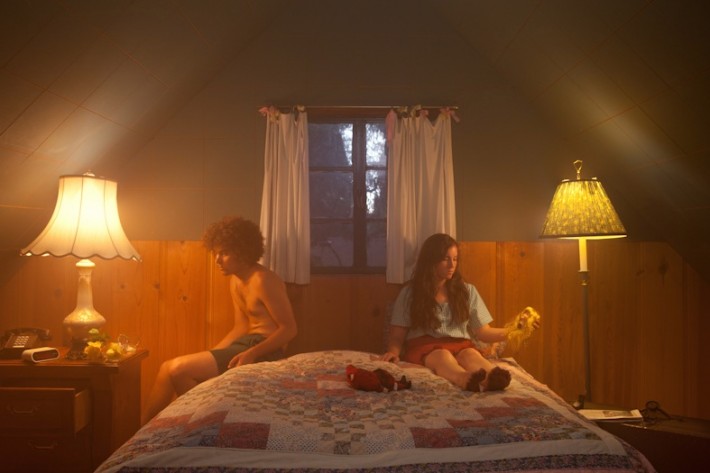 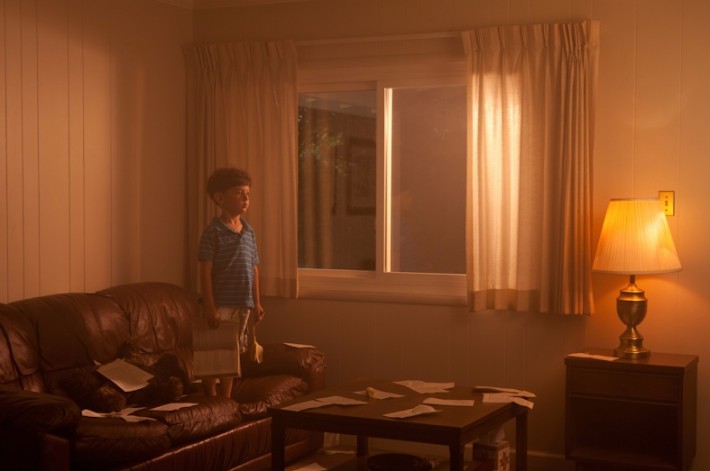 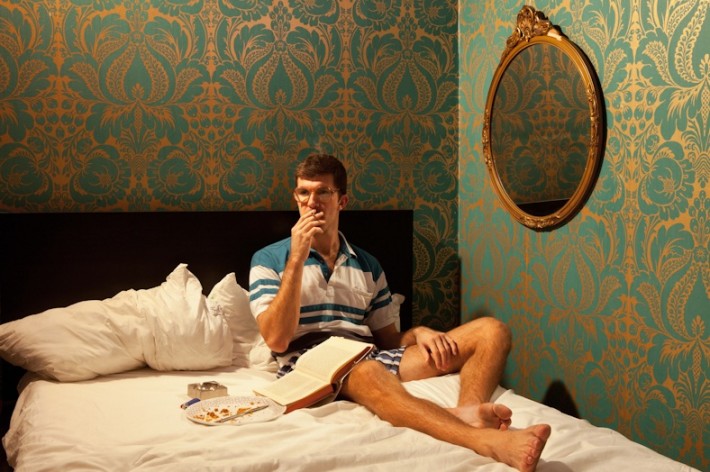 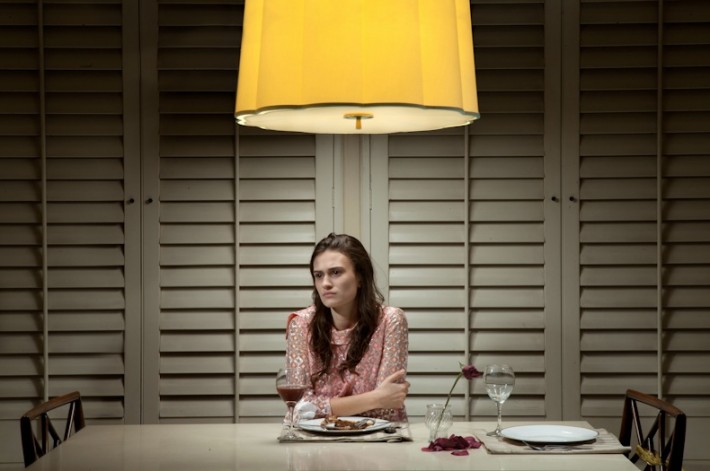 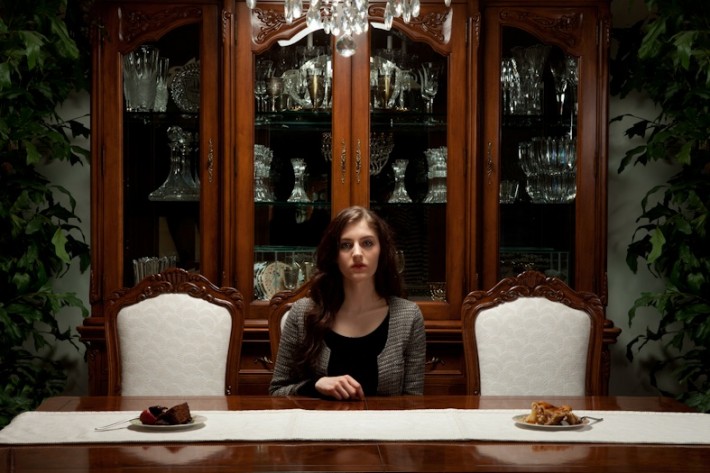 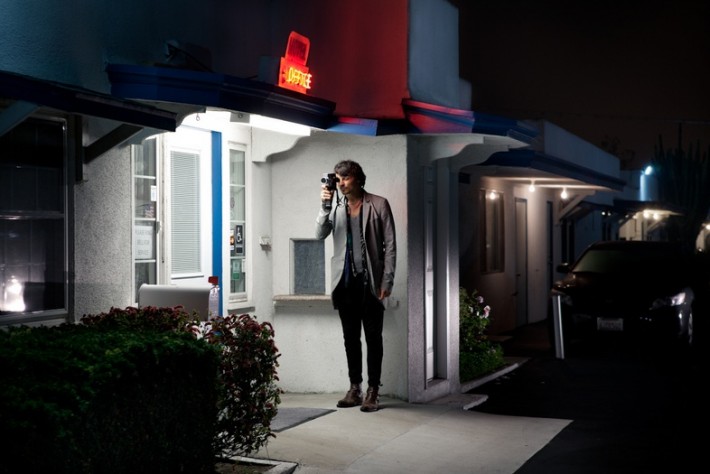 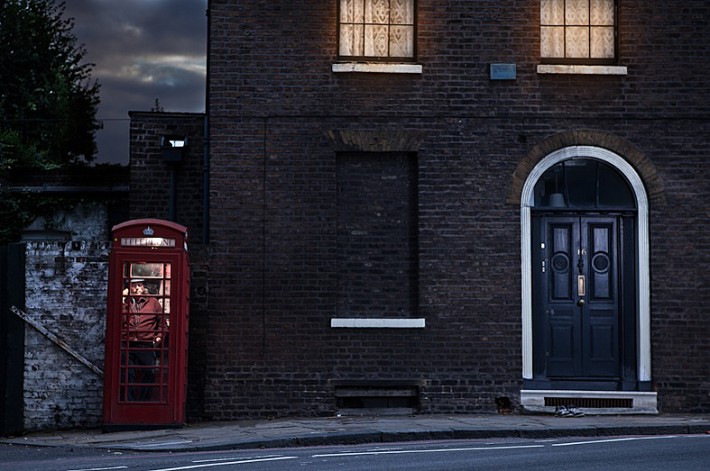 These are very well done and are kinda creepy.  =)  Tons of story going on in these although I have no idea what that story is, leaves room to think about what's happening.  Cool stuff.

These would be beautiful, if they weren't a blatant rip off of Gregory Crewdson
https://www.google.com/search?q=gregory+crewdson&amp;aq=0&amp;sugexp=chr...

Yes, very much so. At least credit Gregory Crewdson's work as your "inspiration".

Don't be naive. Crewdson is by no means the only person who has ever made a photograph of this style. I'd like to see you execute the style of photography Justin does on each of his sets.

And if by some off chance that you could, you should know better than to criticize another artist when you know full well the creative and technical mind that is required to accomplish this style.

I agree with safesounds. What intrigues me is that even though it is an obvious copy of Crewdson's work, he wasn't mentioned even once. It might be more simple, but everything is there from the lighting to the expression on the models' faces as well as that particular `uncanny` moment. And that stuff he said about his suburban upbringing... yeah, sounds familiar. Nonetheless the images are striking and interesting to look at for longer, just a little credit, that's all.

I'm guessing you guys are not familiar with the situations when 2 artists or inventors working on the same project without one knowing about the other. This might just be another coincidence.

"Without one knowing about the other" Gregory Crewdson have been under the spotlight for many many years I seriously doubt that Justin haven't heard of him. I'm not stating that they are rip offs, I don't personally know the guy but I know he has worked with Ryan Schude, if you look at Ryan's photos you'll understand a lot of things ;) http://www.ryanschude.com/

Wait so somethings wrong here. The Image at the top of the fstoppers article is on Ryan Schudes website. http://www.ryanschude.com/#/Book%201/one/9/
Did fstoppers screw up or is homeboy here really just not that original at all.

That first top photo was a collaboration with Ryan Schude. the others are solo shots by Justin http://ryanschude.tumblr.com/post/22266642993/collaboration-with-ryan-sc...

Thanks for clearing that up.

That first top photo was a collaboration with Ryan Schude. http://ryanschude.tumblr.com/p...

I know of this, but even from his answers in the interview...it's as if he is trying to literally be Crewdson. They almost mirror perfectly Crewdsons interviews. As well as the the place he thinks about his photos, replace running with swimming and thats the EXACT answer Credson gives.

Maybe he is stalking Credson or has it out for him?

I would say these photos are beautiful, as a production like this isn't easy. However i completely agree the images are so so heavily influenced by other photographers work it is almost silly. It isn't just Crewdson (Interesting to note that in the interview the interviewer mentions that all the photos are taken during twighlight, Possibly crewdson most famous work called twighlight), the work has heavy influences from Philip-Lorca diCorsa and also Nan Golding ( The image with man and women on bed, very simular to one of her most famous images). It is important to mention that all photographers use others work as an influence the question or point i guess most are making, myself included is that this has gone to far.

Thank you everyone for the feedback. It goes without saying that I am inspired by Crewdson, I should have mentioned that in the interview. I'm also inspired by other photographers such as Philip Lorca DiCorcia, Julia Fullerton-Batten, Erwin Olaf, etc.

To answer Safesound and Rodrigo, I approached Ryan with the idea to do that shoot and we collaborated on it. If you go on Ryan's tumblr and on my blog we both credit it as a collaboration:

If you go to my site, I have work that is not in this vein at all.

I looked at your other work, I really enjoyed the shoes series quite a bit.
I probably came off as a total douche, I just have a slight obsession with Gregory Crewdson, have followed all of his work and interviews and anything I could get my hands on. So it really is difficult for me to see past that within your series. I mean there are a few photos in your series that I could point to a specific Crewdson photo and everything is just too similar.

But all that aside...shoes, great series.

Thanks for clearing that up! Now that I think about it I think I know you hahaha you were in the boltron shot in the Forge right? Cheers mate!

Wow. Amazing. The first time around I quickly scrolled through the photo's and they didn't seem that interesting to me. Only to stop at the first one again and notice the story it tells. I just had to analyze every photo and "read" the amazing single image stories. Truly great work!

If only I had been familiar with the works of the photographers you have been inspired by. Too bad to read the other comments.

absolutely depressing.  I'd shoot myself if I had to work with these images.