An Email App To Be Excited About

How do you turn the mobile email inbox into a to-do list, but in a non-obtrusive way? Cloud to-do list company Orchestra today announced Mailbox, an email client for the iPhone it's been building for the last year which will launch soon — a beautifully designed messaging client meshed with a swipe-able productivity app. "Most everyone uses email on their phones, and most everyone hates it," Orchestra CEO Gentry Underwood says. "We feel like that's a big opportunity to make a small improvement in a lot of people's lives."

As creatives we tend to be on the run a lot and if you are like me you probably love checking your email from your phone. The issue I have is I will read and email and mentally note or even star the email in order to followup on it when I get back to my computer not wanting to type a message with my chubby fingers from my phone. Only to get back to my desktop and find 20 more emails waiting and the previous "important" email buried not to be found again days later. In short I have a love/ hate relationship with my mobile email. I love the convenience of checking it on the run, I hate not being able to keep it conveniently organized. That's where Mailbox is different.

Setting aside the baseline functionality a mobile email client needs to have, Mailbox excels in a few key areas. First, it’s blazing fast. It’s as fast, if not faster, than Apple’s stock Mail app at downloading and sending messages. "IMAP is super slow and cumbersome, so we built our own communication system, leveraging the year-plus of work we'd done to optimize messaging for Orchestra," Underwood says. "We check your email from the cloud, compress and reformat it for your phone, and have it ready and waiting for you when you open the app."

Mailbox also excels at displaying message threads as if they were texting conversations. When you tap into a message or conversation, you notice that instead of conventional emails, you see small chat bubbles displayed tactfully. Mailbox does its best to hide signatures and only show the meat of each message, but tapping any individual message lets you see any message in its expanded state, which includes To, From, Cc, and other fields. 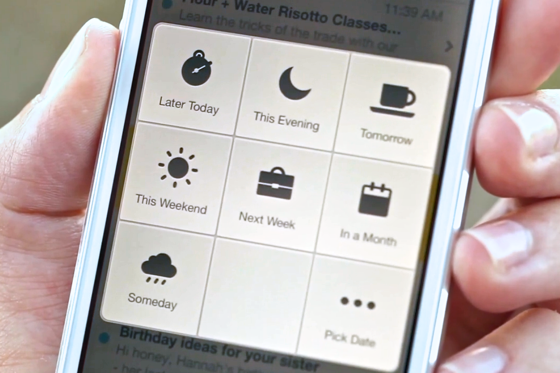 Last but not least, Mailbox has a useful scheme for deferring messages and saving them to do later. Swiping a message to the left pops up a grid of options that lets you decide when the message will pop back into your inbox. It is similar to Boomerang, a Gmail plugin that works well on desktop, but not as well on mobile. You can chose between seven "snooze" options: later today, this evening, tomorrow, this weekend, next week, in a month, and someday. You can also select "Pick Date" to set a precise date and time for when the message will surface in your inbox. In Mailbox’s settings, you can nail down exactly what each of these options means. For example, if you leave work at 9PM, you can have Mailbox return messages you’ve marked for "This Evening" to return to your inbox at that point.

The best part is that messages you defer for "later" on your phone also translate to the inbox on your computer or on the web. Mailbox creates a "Later" folder in Gmail to hold the stuff you don’t want to deal with. On the iPhone, Mailbox’s Later folder is cleverly organized by date, letting you browse through all the messages you’ve saved. It works very well, and begs for a Mac counterpart.

Mailbox looks to be an great new email app for iPhone, and hopefully someday soon for Android as well (I already feel like I am missing out!) Combining a fresh take on messaging productivity with lightning-fast sending and receiving, Mailbox is a winner. The app does have its share of shortcomings and missing things, namely a Starred section, photo avatars, a way to only view unread messages, a built-in web browser, and support for non-Gmail accounts — but considering Mailbox is a 1.0 app, I find it very hard to complain. Now, all we have to do is wait until "the new year" when it hits the App Store (for an unspecified price).

this reminds me of gmail for android...

If gmail for Android can do this I would love to learn how. That is what I use but maybe I haven't learned it as well as I should be.

you can do the swipe to delete or swipe to archive. but its only available on the latest version of jelly bean right now i think... but if you look around the net you can probably find the .apk to download and install.

Hmmm that is a start. I love the features on this of assigning it to pop up again at a  later time similar to Boomerang or FollowUpThen. Are you familiar if it has any features like that on the mobile device.

This app gives you far more options than "star" and "archive."

Thanks for the link. Going to see if I can get it the update on my phone.

The swipe is like the iPhone mail but you can't snooze emails like this app can. It would be great to use that feature if you have an email that you want to come back to in a few days. It's like a reminder instead of having that email just sit there, getting buried by other emails. I'm sold...

and now that the song is over she can get back to her walk. yawn.