Going on an adventure this weekend? Maybe a hike or a cool concert? You're probably going to Instagram it too, aren't you? Well, put your iPhone down, because Barbie (yes, the Hasbro toy) is killing it on Instagram better than you ever could.

Socality Barbie is a hilarious Instagram account that parodies your big hats and wanderlust adventure photos with her hipster glasses and knit beanie. Gone are the days of Barbie wanting to be a dentist or flight attendant. No, today Barbie just wants to drink artisan lattes and sit on the beach in an authentic Native American blanket.

The recent boom in millennial adventure photography caused the woman behind the account, who wishes to remain anonymous, to create an Instagram account to illustrate her point that all these #liveauthentic and #pnw photos were starting to look the same. The woman tells WIRED: "People were all taking the same pictures in the same places and using the same captions. I couldn’t tell any of their pictures apart; so, I thought: ‘What better way to make my point than with a mass-produced doll?'”

On a passing glance, you might not even notice the photos are of a plastic toy with how much detail goes into each image. The images of Barbie aimlessly looking off-camera and contemplating life are almost all real. The props, clothing, and locations are almost all handmade. But the photographer behind the account does admit some images are photoshopped.

Once a genre gets popular, parodies and satire are bound to happen. It's when you know something had gone mainstream. The repetitive, almost sappy photos preaching: "Get out and explore" and "Life has so much meaning in the wilderness" are everywhere. Places like #ThatPNWBridge and #MultnomahFalls are now crawling with photographers trying to reproduce the photos they saw on Instagram just that morning. But nobody really lives like the people in those photographs... unless you're Barbie, I guess.

So, pack up your giant American flag and your colorful smoke bombs and maybe take some of your own advice... and #liveauthentic.

​All photos used with permission.

This is so good.

Actually, I am going on an adventure this weekend... with the garden gnome I've been stealing from my parents house for the last 12 years. He can't be posed or dressed up though.

We have a family gnome too. Here he is on the beach in Ventura. The Barbie is awesome. 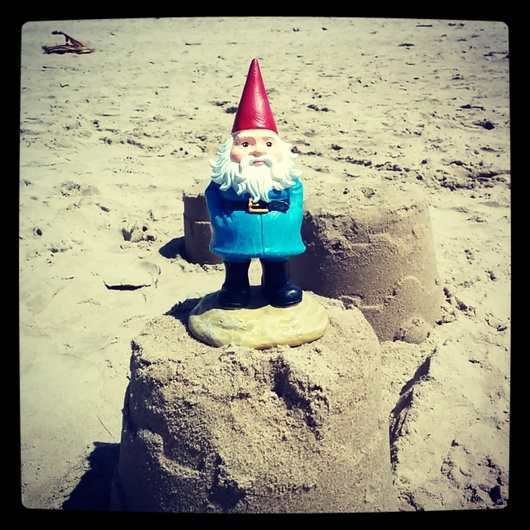 Isn't this travelocity's gnome? Or expedia or some other travel cie?

Travelocity. I regret not taking him to Alaska, but he's gone on the road trips with us.

If you are ever in Chattanooga, check out Rock City. They have gnomes everywhere. There is a section of the garden that is the valley of the gnomes. But they also have placed gnomes all around the mountain. I didn't realize this at first until I was editing my pictures and all of a sudden "wtf, there's a gnome in my frame!"

More evidence that social media is making everyone exactly alike. At least Barbie can poke fun at the herd mentality.

The sad part is how accurate this is to most feeds on IG. All the same filters, looks, styles, views, work, poses, selfies...all a bunch of sheep.

The best and most funny aspect of it, is that it subconsciously makes fun of all the people who do the same work on their feeds.

Well done to the person who did this. Well done!

I know it's not the point of the article, but that's not an authentic Native American blanket. It's a Hudson Bay Company (Canada) blanket that the store used to trade, along with other goods, for fur.