Photographing the Moon With Jaworskyj

In case you've never taken the time to just sit outside at night and look (or howl) at the moon, it's actually freaking awesome. The logical next step is to setup your gear and trying to photograph our lunar friend.

Via the German adventure and landscape photographer Benjamin Jaworskyj, here is some of the basic how-to information for when you breakout your tripod and are ready to start firing shots a the moon. As you might expect or have already learned the hard way, getting a really stellar image of the moon presents some unique challenges. Things that you'll definitely want to have include clear skies (no point trying to shoot the moon if clouds prevent you from even seeing it), a tripod (a no-brainer given that you're shooting something in the dark at slower shutter speeds), and as long a focal length as you can manage to get as the moon is really far away (238,900 miles to be exact).

This video initially caught my attention because I remember when I was first playing around with my first legit camera the moon and night sky was one of the first few things that I tried (and failed) to photograph well. Though after some practice and an absurd amount of good luck, I was able to get a pretty epic capture of the full moon with a plane plus jet trail silhouette. Here's to perseverance and sheer dumb luck.

Even if astophotography isn't your thing, it's still a fun learning experience to give it a try. Maybe you learn something you can apply towards the rest of your photography or maybe you just get one epic shot you're really happy with. Either way, learning new and different things is never a bad thing. Have you tried photographing the moon before? Maybe for an eclipse, supermoon, or harvest moon? Maybe you're just finally ready to activate werewolf mode, which sounds awesome, count me in.

2 second timer works if you want a single image, but if you want to stack multiple images investing in a intervelometer is invaluable. The amount of shake the camera will have from constantly going back and pressing the shutter will cause many a moon to end up blurry.

I agree with you. But there are cameras, which have an intervelometer integrated.

Of course. Both my 5DM4 and A7III (I believe) do. Though, personally I prefer plugging one in for the simple fact all I really need to use is the Start/Stop and shutter release. But that's just preference on my part.

Yes the A7III and my A7RIII got it with an update lately. I like to use both options. ;)

What a non-sense about APS-C and full frame.
If you get a Fuji, you exactly get the full frame equivalent.
If you put a longer lens with a calculation of the crop sensor to the full-frame body, you'll get exactly the same.
Why do people teach photography who do not understand it themselves?
Youtube "teachers" are really getting boring.
I prefer the full-length tutorials here. You get what you pay for.

I don't understand the concern about crop sensors. For a full moon wouldn't MFT be best for an adapted lens so you don't have to crop the image in post?

...unless you need to crop the MFT of course. However because the moon affords you the luxury of a low ISO, you can get away with a little bit with cropping an MFT before res drops out bad. Here's the summertime besties Jupiter and the Big Cheese, Olympus E-M10 Mk II and Pana 45-150 wide open at 150, 1/320 sec at ISO 200, heavily cropped... 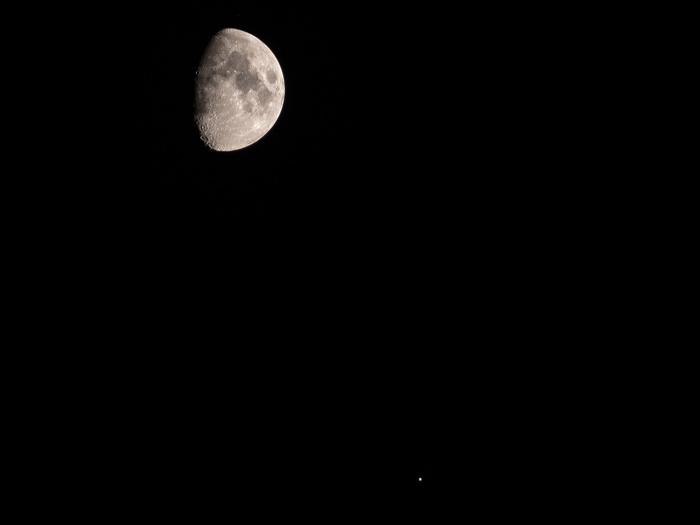 'Looney 11' works for me every time

Don't trust the first line item in a Google® search...always pick the second or perhaps third.