The Ultimate Millennial: Can You Monitor Audio With AirPods?

Wireless audio monitoring is meant to be a cardinal sin, but isn’t youth about breaking the rules?

Last month Corridor Digital rigged an entirely wireless cinema camera kit. It was pretty cool, but one thing stood out as odd. They were using a Bluetooth transmitter to monitor the audio, while a wireless microphone kit transmitted the audio into the camera. An interesting idea, that I thought I'd test out myself.

I picked up the the Bluetooth dongle that they used, which transmits and receives a signal. Right off the bat, I was surprised at how easy it was to setup and that it actually did as intended. I began to think this stupid idea might actually work. The Rx/Tx switch on the side is pretty useful, so if this experiment doesn’t work out, I can still use this on some old speakers.

First I tested the dongle plugged into my MacBook Pro, trying to play the piano in Garageband. Unfortunately, the MacBook’s built in Bluetooth system isn’t able to mitigate the delay to a pair of AirPods. The dongle? It wasn’t any better. It’s hard to keep time and you wind up playing the notes slower and slower to combat the lack of feedback. The delay is for about a 1/4 second, which is totally noticeable. 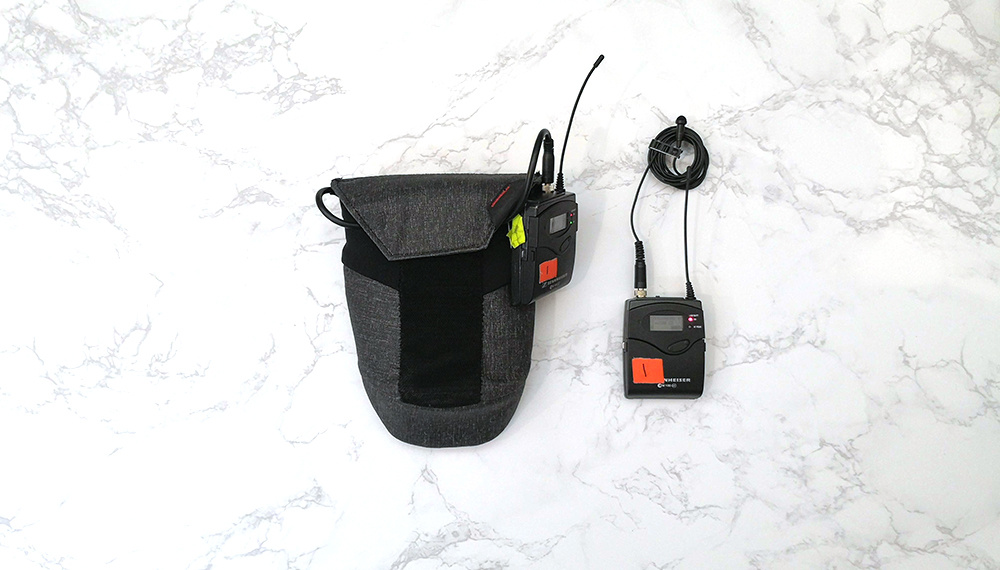 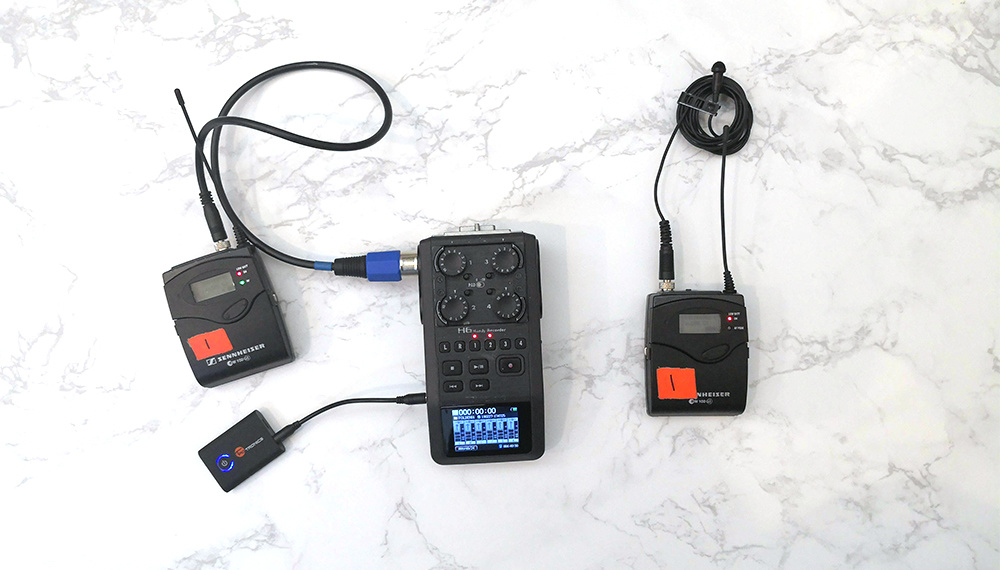 The kit packs away neatly. Since there's a respectable range from the Sennheiser kit and Bluetooth dongle, you wouldn't necessarily need to strap it to your belt either.

Ok so onto the real test. I used a Sennheiser wireless mic kit here, so I could be truly wireless. The transmitter was in a friend’s pocket across the room, while the receiver was plugged into a Zoom H6. I tucked all of this into a pouch, and plugged our handy Bluetooth dongle into the headphone output of the Zoom audio recorder. Then I listened through the AirPods. The delay was still there.

I’ll sum it up like this: if the subject isn’t right beside you, and you can’t hear them outside the AirPods, then it totally works. Sadly, this doesn’t apply to most situations. It would totally work if you were passively following somebody from a distance, like for a prank show on the street or similar.

I tested the setup with a pair of Bang and Olufsen H9i headphones, which have active noise canceling built in. The delay appeared to be a little less noticeable, but it still wasn’t perfect. There wasn’t much advantage over the AirPods here, but the subject could be a little closer to you.

So did my millennial dream die? A little, but I had fun trying it out. In the real world, the best application would be for the camera to hear what the audio recorder is hearing without cables. Buy a second Bluetooth dongle, and transmit the mixed audio into your camera. That way you could always remain in sync (albeit, with a fixable delay). Still though, you could just get a clap sync at the start of your shot and run it the old school way.

I can't because AirPods don't stay in my ears…

Yep. I have never liked apple ear phones for that reason. They actually have some pretty decent sound quality. They are also very uncomfortable.

I have been trying for months to get my TaoTronics dongle to pair with my airpods with no luck.