Outdoor Boudoir: It's a Thing [NSFW]

That's right you boudoir photographers, if you haven't tried shooting boudoir outside before then you are seriously missing out. There really are quite a few reasons why you should give it a try here are a few of my favorite reasons why I shoot boudoir outside instead of in a studio.

Realistically, I had two very specific reasons why I began shooting boudoir outdoors. The first reason was simply that I wanted to try something completely different than what I had been shooting in the past. Shooting in a studio is definitely much easier, with the more easily controlled lighting and the obvious ease for privacy. But even though I had shot in multiple studios and had used a wide variety of shot setups for each shoot, I still wanted to push the boudoir style just a bit more. Honestly, my first shoot I conducted outside was literally just to see if I could do it. The second reason I began shooting boudoir outside was because it's a hell of a lot cheaper. If I'm not renting studio space, then I can keep pricing down and therefore make it more financially feasible for everyone involved in the shoot.

One of the things that I absolutely love about conducting boudoir shoots outside is the fact that the range of shot options is virtually unlimited. With so much more room to move around, there is so much more variety available to both pose my subject and set up shots. This means that I can use a larger variety of lenses in many more ways, resulting in a much broader opportunity for styling each shoot differently. Compared to shooting in a studio, shooting outdoors feels incredibly freeing because I can walk 100 yards away from my initial shot setup and set up the next shoot with a completely new look and feel.

I also truly enjoy how the choice in a location can really change the mood of a shoot. Shooting in trees feels different than shooting in fields, which feels very different from shooting around a river or stream. This lets me build shoots around each location to maximize the potential for each area in which I work. I always work closely with my clients and models when it comes to picking locations and outfits. Their preference in outfits, specifically their choices in colors, is a big factor for picking the right location. Coordinating color schemes that complement each other between outfits and locations will just add that much more to your shoot when you do it right.

One of the main challenges, right off the bat, which you will likely face when shooting boudoir outdoors is that of managing your light. Since it's outside, now you have do deal with the same problems that exist for every outdoor shoot already. This means you'll have to start coordinating shoots around specific times of day in order to maximize the best lighting for the shoot, a problem that doesn't usually exist for studio shoots. To manage this, I have a simple sunrise and sunset tracking app on my phone to track the sunset times and I schedule my shoots to begin usually 90 minutes before the scheduled sunset time. If I'm dealing with cloudy weather, then I will bump that time 30 minutes earlier to account for reduced light which will affect the sunset time. It is rare for me to schedule a sunrise shoot, honestly because most people don't want to have to get up that much earlier to prepare hair and makeup before a sunrise shoot time which, during the summer, is usually 5:30 a.m. But hey, if you end up working with someone that doesn't mind a 4:00 a.m. wakeup time to be at your shoot early in the morning then by all means, go for the sunrise shoot.

Privacy is another obvious concern for setting up boudoir shoots outdoors. If your client, or model, isn't exactly comfortable revealing that much for an audience then you need to keep that in mind when picking your locations. That and at least where I live, in Southern Utah, there are certainly places that are visited much more frequently by families with young children and setting up a boudoir shoot where such families could hike into your shoot is something that should be avoided in order to keep from creating a problem for yourself. For the United States, in order to conduct shoots within national or state parks you will need to acquire a permit for your shoot and they may or may not give it to you. I just avoid the parks and head straight into other unregulated locations. I find my locations by spending a large amount of time driving around and hiking to explore possible shoot locations. Or if you happen to know land owners near you then coordinating a shoot on private land is a great way to ensure privacy for your client or model and to guarantee no interruptions during your shoot.

Exposures are another big thing to consider when setting up your outdoor boudoir shoots. If you're dealing with direct sun, which means now you need to think about the potential need for sun protection for your subject, which will in turn have an impact on your shoot. Will they need sunscreen? Their skin may look different with a coating sunscreen on it, so it is definitely worth taking that into account when planning both your shoot location and shoot times. For those of you who will be utilizing wooded, field, or stream and river locations then you will likely need to consider some sort of bug protection for your subject. The last thing you need is for someone to accumulate a large collection of mosquito bites while in the middle of a shoot. Not only will it be uncomfortable for them, but the bite marks will now add an extra load of work for your postproduction process. Sun exposure and wind can both attribute to dehydration as well, so you will want to make sure to be extra prepared with water on the shoot so that nobody ends up in a problematic medical condition.

Basically, shooting outdoors can be a lot of fun — a whole lot of fun. But it does take some extra planning and preparing in order to pull it off correctly. When you don't have the privacy and controlled temperatures of a studio then it is important to think beforehand of all the factors which will impact your shoot and plan accordingly. When you take the time to conduct the shoot right, the resulting images can have that much more of an impact and that will allow you to really do more with the style.

Whether you are either new to shooting boudoir outside, or if you have done it all along, I would love to see your work. You can comment below with examples of your work, share links to your Fstoppers portfolio, or you can join the new group specifically for outdoor boudoir.

Boudoir / May 12, 2019
Balancing Your Boudoir Photography Business and a Family

Boudoir / March 9, 2018
Top Tips for Shooting Boudoir in the Desert

Me being literal for no reason….

Typically, a boudoir will include a bedroom, dressing room, bathroom, and a room for relaxing/pastime activity. Traditional boudoir photography (and art) may include a chamber-maid.

Yes, I am splitting hairs, but it is important to distinguish, insofar as the client needs to know what one is actually offering, and more importantly, what one is not offering.

Saying it how it is isn't splitting hairs.

Agreed. Nudes in the Southwest has been a thing for decades. Far more artistic than most modern boudoir (indoor) work, too.

hahahhahahaha...I'm with Karim on this. "Outdoor Boudoir" is not a thing. Glamour or Erotica shot outdoors is a thing and been so since some dude with his Kodak Brownie convinced some lady to doff some clothes in nature after a picnic.

thanks for the chuckle today.

Boudoir for me has always ment having the subject look and and feel sexy. Who are any of you to define what that is for an individual! Maybe not for you older generations, but for us younger its something i find absolutley gorgeous that could be done with or with out ones clothing on.

Yes by all means, let us all have our own private definitions of what words mean, so that we can really ensure that we can all talk past each other all the time and not be held responsible for what we are saying because we meant it in a different way </sarcasm>

The way the wind blows these days in universities and such, it seems that the older generation (that means us over 50) , has way more affinity and tolerance to all expressions including nudity, erotics, sex, etc.

It's funny how the young always think they invented everything.

«…for me has always ment [sic]….»
You ought to have looked it up. It would be like me saying, “aperture for me always meant how dark the scene is….” Yes, there is some sort of correlation there, but it is not the definition.

«…look and and feel sexy.»
Nothing wrong with that, but if it isn't in a boudoir, it is not boudoir. That would be like a genre of photography called, ‘pool photography,’ but I do it in a forest. I can state that for me, pool photography means being in a swimsuit and looking wet & sexy, but that does not change the meaning of ‘pool’.

«Who are any of you to define….»
We don't actually define the word, we just look it up.

«…could be done with or with out ones clothing on.»
No one is arguing that, we are merely discussing whether one can call it boudoir photography if it is not done in a boudoir. A lady may be in her chambers fully dressed, completely naked, or anywhere in-between. That is not the issue.

Nice post. I was not aware of boudoir done outside like this. I like. Timely to. I have two requests to shoot something like this close to a creek. My concern is access and privacy. With a “bum knee” not able to walk far. If I get the project completed, I will post some here. Thanks fstoppers. I did a first yesterday I found talent to do some nice nude body “contortions” so to speak. Going to post one today. My first attempt to create this art form.

Yeah, it's called glam... been a thing for some time.

I do outdoor lingerie shoots and market them as "boudoir style". I know what boudoir means so it drive me nuts when I do use "outdoor boudoir". Ha Ha! I use "outdoor boudoir" for SEO. Plenty of women in my parts use that term when they are looking to have this type of shoot done. Therefore, I use it more for SEO.

I made a comment a few days ago how I like the idea of boudoir outside , Welll here is my first one. 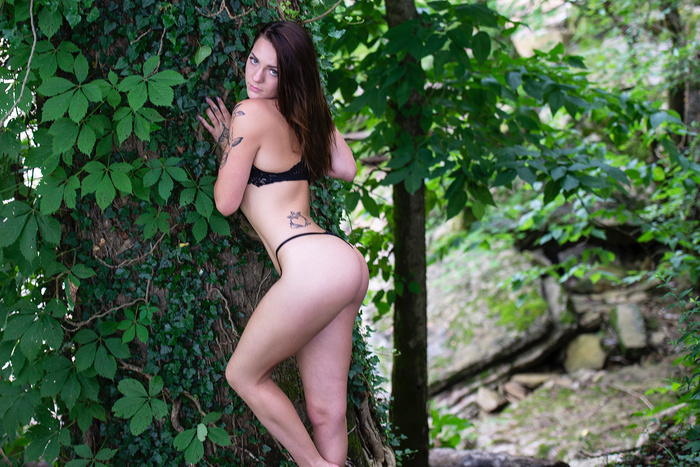