If you were a kid of the 1980s like me and loved Nintendo, you absolutely remember the Power Glove. In fact, I think that was one of the only scenes I remember from the movie "The Wizard" starring Fred Savage of "The Wonder Years" was the debut of this badass piece of 80s tech. Fast forward to 2015. The animator of the Adult Swim show "Robot Chicken" has modified his Power Glove to control his stop-motion workflow. Woah, dude.

The glove has traditional NES controller buttons on the forearm as well as a program button and buttons labeled 0-9.The user presses the program button and a numbered button to input commands, such as changing the firing rate of the A and B buttons. Along with the controller, the player can perform various hand motions to control a character on-screen.

The sensors in the Power Glove are based on optical fibers that are scratched near the bending joint to cause it to transmit less light when bent, an innovation developed by Young L. Harvill of VPL Research. There are two ultrasonic speakers (transmitters) in the glove and three ultrasonic microphones (receivers) around the TV monitor. The ultrasonic speakers take turns transmitting a short burst (a few pulses) of 40 kHz sound and the system measures the time it takes for the sound to reach the microphones. A triangulation calculation is performed to determine the X, Y, Z location of each of the two speakers, which specifies the yaw and roll of the hand. The only dimension it cannot calculate is the pitch of the hand, since the hand can pitch without moving the location of the two ultrasonic speakers.

The Power Glove is based on the patented technology of the VPL Dataglove, but with many modifications that allow it to be used with slow hardware and sold at an affordable price. Whereas the Dataglove can detect yaw, pitch and roll, uses fiber optic sensors to detect finger flexure and has a resolution of 256 positions (8 bits) per finger for four fingers (the little finger is not measured to save money, for it usually follows the movement of the ring finger), the Power Glove can only detect roll, and uses sensors coated with conductive ink yielding a resolution of four positions (2 bits) per finger for four fingers. This allows the Power Glove to store all the finger flexure information in a single byte. However, it appears that the fingers actually feed an analog signal to the microprocessor on the Power Glove. The microprocessor converts the analog signal into two bits per finger.

As you can imagine, this was pretty advanced wearable tech for the time, but its functions were limited due to the rudimentary NES system. It's not surprising that with a bit of smart modifications and development that the glove could still be used for modern applications.

Equally interesting is the rumor that not many of these Power Gloves survived due to the quickly deteriorating electronic sensors within them, so I am thrilled to see one put to such excellent use!

Something like below strapped to your arm would have been easier, more practical, and more capable. Still nice to see someone capture and preserve a piece of their youth in such a way. 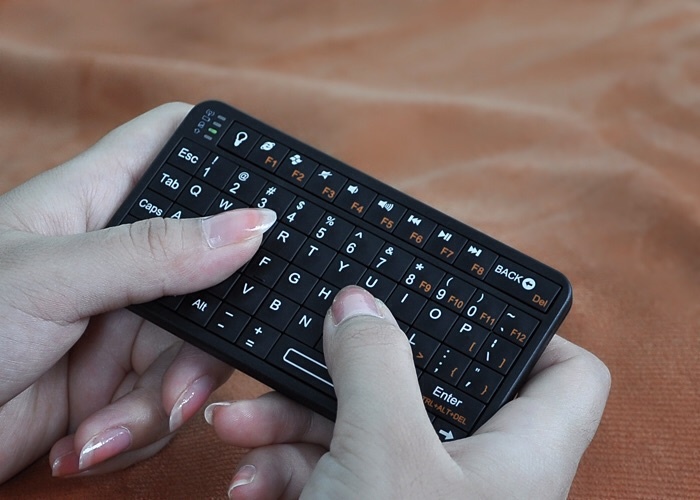 So the Nintendo Wii was actually created in the 80's....mind = blown

According to Wikipedia the first video game was created in 1947.

No Thumbs Up.
Fistbump!

Well at least my generation has the selfie stick...

If you mean the selfie stick which came in 2015? sorry mate :(
In 1995 they released a book called 101 unuseless Japanese Inventions. and there the selfie stick was called the biggest piece of quack-tech ever.
So in other words selfie stick is older than you think mate;)

Actually, the first came before you were born :)

this really made my day.
I'm going to watch The Wizard and then fire up some Punch Out.
thanks for sharing this.