The Feiyu 3-Axis Wearable Gimbal is a miniaturized version of Feiyu's handheld gimbals, offering motorized 3-axis stabilization in a compact, wearable form factor for the latest GoPro and similar action cameras. Designed with flexibility in mind, the FY-WG features 1/4"-20 threaded holes for horizontal, vertical, or inverted mounting onto a variety of support devices. It can also be used with any accessory that uses the standard GoPro three-prong mount, letting you capture all of the immersive action camera shots that you're accustomed to, but with full motorized 3-axis stabilization.

Like many others, I have a GoPro but it's been sitting on a shelf collecting dust. I bought one to mount on my DSLR's hot shoe  to take BTS footage on my photoshoots. After spending all that money on the Hero 4 and different  accessories, I realized that my idea was pretty much useless. Every time I turn my DSLR vertically or bring it down to review the images, the GoPro would be in some crazy direction capturing footage that makes you dizzy.

This nuisance came to an end last week when I came across this little gadget made by Feiyu. It's a 3 axis wearable gimbal. In short, it will hold the GoPro in any direction or orientation no matter which way you hold the base. This base sits in the hot shoe of my camera letting me hold my camera however I'd like while still keeping the GoPro in one position to capture smooth footage. I imagine this gimbal will be quite helpful in the future like riding my bike, mounting to my car dash and even putting it on a selfie-stick. 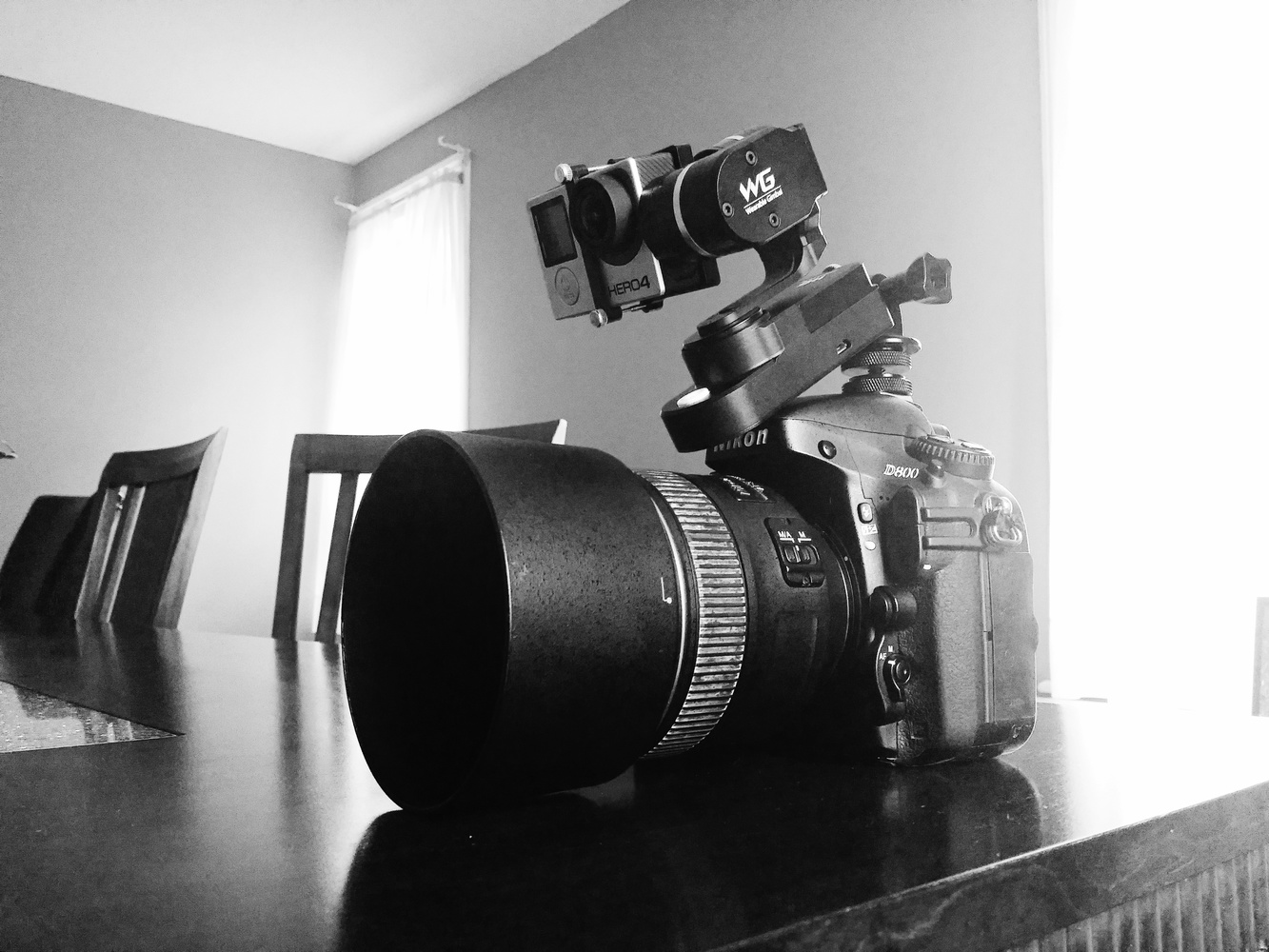 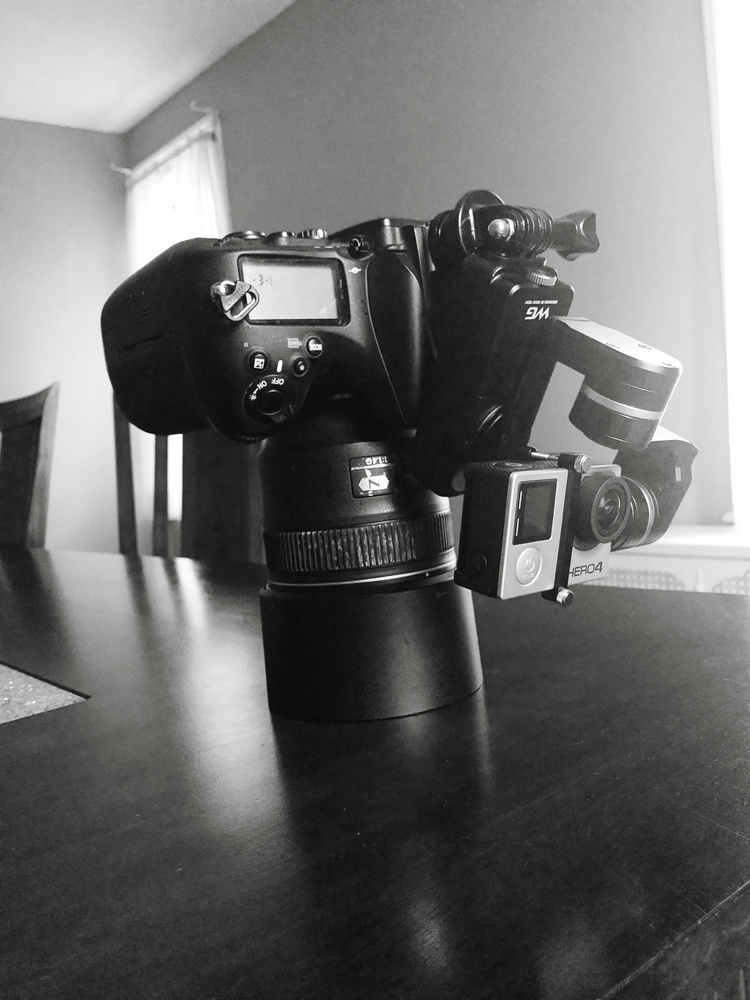 When this product arrived, I was really impressed right from the start. It comes with a hard carry case with custom foam cutouts that fit the gimbal and all its accessories perfectly. Unlike other electronics, they did not cheap out on batteries. Two sets of batteries come with the gimbal. It has all the necessary mounting hardware to mount it to pretty much anything from a tripod 1/4" 20 mounting thread to the standard GoPro 3 prong mount. It also has the wires you need to update the gimbal’s firmware.

The first thing I did after unpacking it was mounting the GoPro and the gimbal to my head strap and running around my property. As expected, you cannot compare the footage. This thing completely stabilizes the GoPro, whether I look down or up, ilt to the left or right the GoPro stays in its exact position. But here's the beauty of it, I can lock whether I want it to only stabilize the tilt from side to side but not up and down. You can custom any of the 3 axis's to lock.

The great thing about the product is how versatile it is. You can mount this thing ANYWHERE, it is that small and light. To control the Go Pro I paired it up with a Removu P1 remote viewer which let me use the backpac wirelessly. I had my backpack waterproofed and straped to my wrist for the ease of remote control.

Two 1/4"-20 threaded holes lets you mount the camera horizontally, vertically, or inverted. It can also be used with any accessory that has a standard GoPro three-prong mount using an included adapter.

Tilt and Pan Following Mode: Locks roll axis. Camera smoothly follows the pan and tilt motion of the handle. All Axis Lock:Locks the pan, tilt, and roll axes of the camera in the position it is in when mode is activated.

Inverted Mode: Allows you to turn the gimbal upside-down. This mode is an inverted version of the Pan Following Mode.

Standby Mode: The gimbal remains on but the motor is shut down.

No matter how your camera is mounted (left-aligned or right-aligned, upright or inverted), the FY-WG will identify the mounting position and automatically make the appropriate adjustments to its configuration.

A single button is used to turn the gimbal on/off and switch between operating modes.

An optional remote control is available that enables pan, tilt, and roll angle adjustment, as well as other calibration settings. For manual tilt adjustment, simply hold the camera in the desired position for about half a second to register the setting.

The gimbal is distributed by Texas TR and available at BHPhoto, Adorama and Amazon.

BTS / December 6, 2018
A Step-by-Step Guide to Making Your Own Portable V-Flats

Can we get one of those in Europe?!

You can order at B&H and ship it to Europe. An option?
Shipping is expensive, but better than no gimbal :D

It gets stopped at customs.

Why?
If I got it send to The Netherlands it will be delivered at my door. I still would have to pay several different taxes, but I can order it and customs would let me pay to get it declared

Netherlands is not Portugal...remember that. Even knowing i'm not corrupt, I do live in one of the most corrupt countries in europe with a stupid tax charge over it's citizens. So, yeah, it will get stuck at customs and they will make me pay almost the same price of the gadgets just in taxes... =/

True, The Netherlands is not the same as Portugal
But we pay taxes too. And a lot of idiot taxes to (they want to increase the tax on water. It means tax on bottled water increased 85% in the last two years)

The purchase of this gimball, inclusive shipping, will be € 451.30 to the Netherlands.
The goverment in The Netherlands will add around € 100,-

But they won't keep it hostage because some goverment-clerk wants to make some money on it to buy a new car for himself :D

Is there any room for the GoPro case ?

I mean the Housing Case because the camera seems to be always "naked" when puts on the Feiyu.

Seems awesome and I almost want to buy one but for paintball I don't see it lasting such harsh conditions. Still will be excited to see what comes of it.

Awesome, I use my hero 4 as well for my bts photoshoots..Here is my most recent video for anyone board..Its only 2 min of your life:} https://youtu.be/MjPif8PXdmI

Thanks Dani Diamond..Glad you enjoyed it.

How awesome is this? I love the mounting on the shoulder. Now all it has to do is shoot laser beams and it's like Predator.

Cool! As camcorders and DSLRs have built-in video stabilization (unlike the gopro), another way to capture stills and video at the same time is this: https://www.youtube.com/watch?v=pvh_usbhXII

Also, as the Gopro is pretty much fixed at a wide-angle, it's hard to get a tighter view on the model. :)

How does one attach it to the hotshoe? With a 1/4" hotshoe adapter or does the device have a hotshoe mount itself? I'm looking at getting one of these for my smartphone and put that on my camera.

BTW: The video on top just went down, due to a copyright claim from GoPro....

I have one of these and I love it. I mount it to the end of my monopod and its great. Well worth the cost.