Combine sculpture, photography, and a powerful message to bring social change to the world and you get a series of impactful works that can bring awareness to important issues. In the case of this personal photography project, I covered my bathroom with over 3000 ibuprofen tablets to bring attention to the widespread problems with drugs and addiction.

I have said it once, and I will say it again: through the medium of photography and filmmaking, we have the ability to change the world-one picture, video, and story at a time. As photographers and filmmakers, we have the power to use this platform as a voice for good; to bring about a greater awareness of the issues we care about. For me, this voice presents itself when I take on personal projects. Sure, doing paid shoots all of the time is great for business, and it keeps your financial status afloat — but, in reality, what are the images that you remember most?

Personal projects give us the ability to explore ourselves. To pursue a unique introspection — not only as photographers, but as people. When we embark on a personal project, we set the deadlines. We set the rules. We determine the overall outcome. It's an opportunity to free ourselves from all expectations, and create simply for the sake of creating. With that said, we can now dive into story that helped give this project life.

The driving idea behind this project was an attempt to document the epidemic that I, and so many people I know, have been touched by: drug addiction and over-consumption. This series not only depicts the effects of an overdose, but serves as a metaphor for the way our society functions.

Today's society has assumed the notion that we always need more than what we have, and that we will never be satisfied. We get so caught up in the vicious cycle of accumulating material things, and we often fail to realize what we already have until it's gone. But, in this series of images, underneath the pain, there is a hidden message of hope.

The series depicts a sequence of events resembling those of someone who is trying to relieve their pain. In the first photograph, the door is cracked open and you see the light seeping through the cracks, casting elongated, deep shadows on the subjects foot prints. This glimmer of hope is then mirrored in the last photograph where the person finds the ultimate freedom from their pain and suffering-death. In the final image, the pills make their way down the drain in the addict's one last attempt to rid himself of their pain. The addict realizes their life is bleeding away, and comes to terms with the fact that either the drugs must go, or they will. Substance abuse is a frightening reality — one that I hope to shed some light on in this series called: "Painkillers". 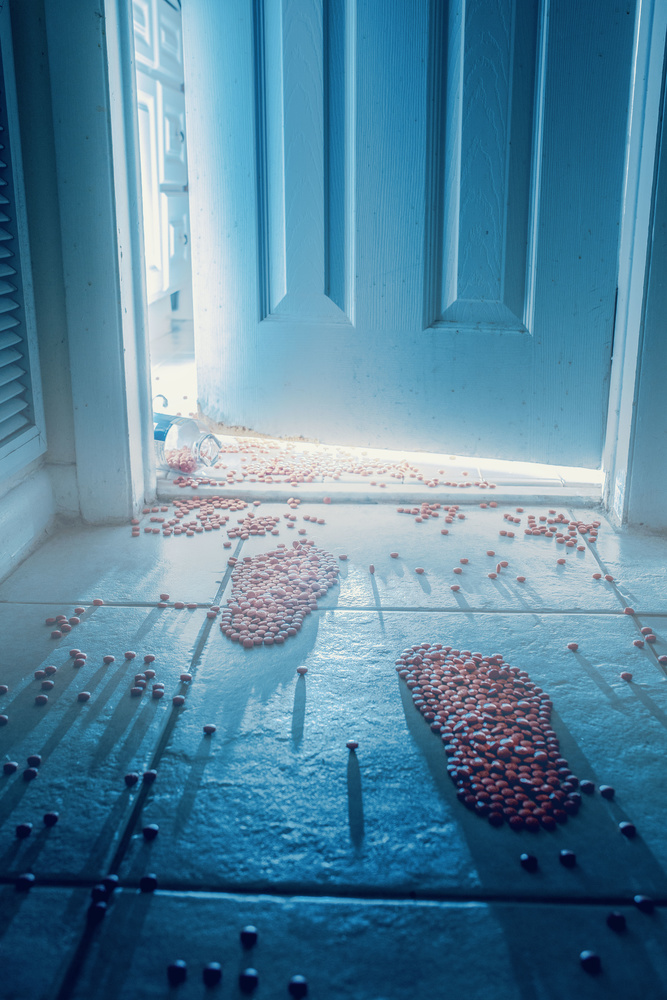 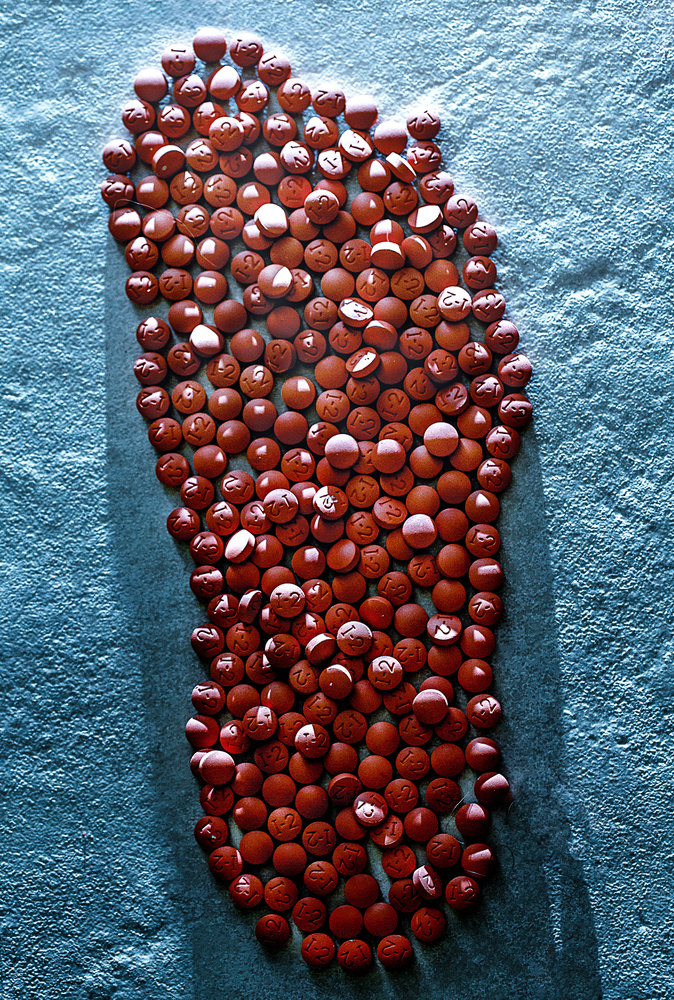 2/5-One Step Closer to Freedom (One Small Step) 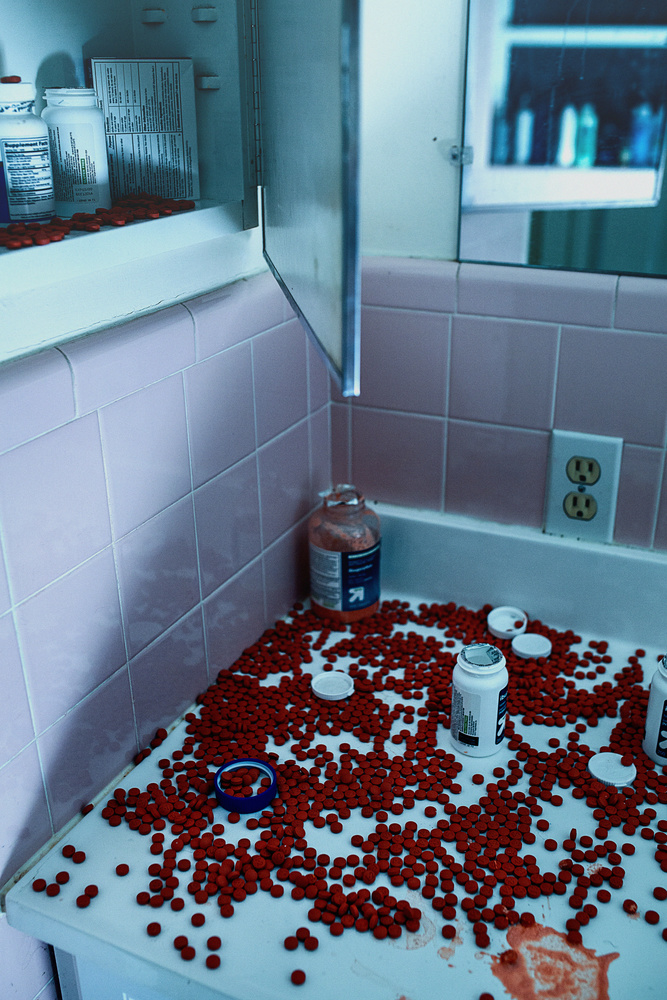 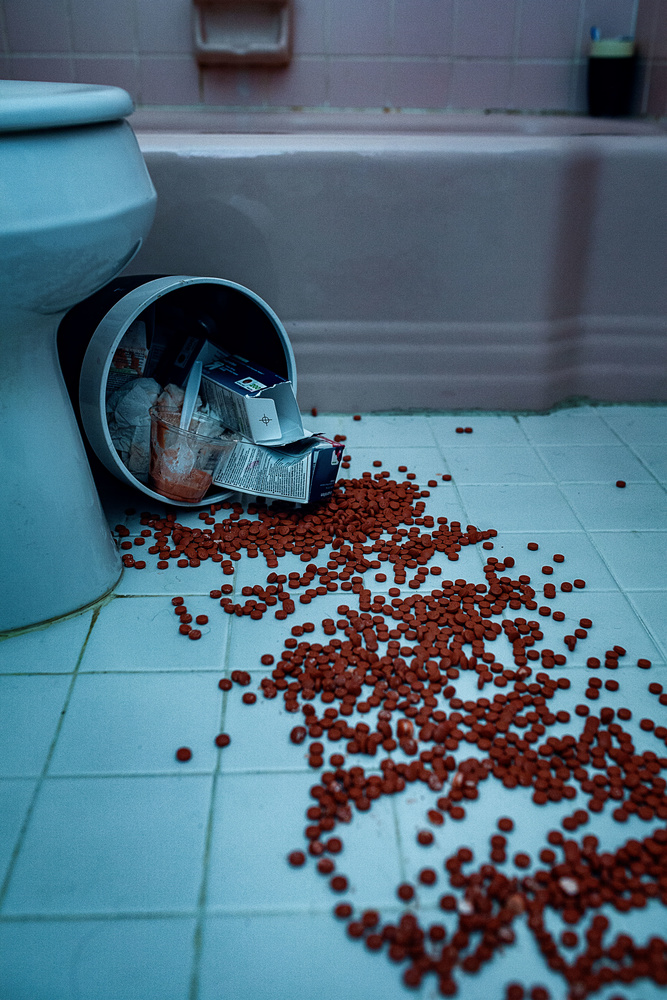 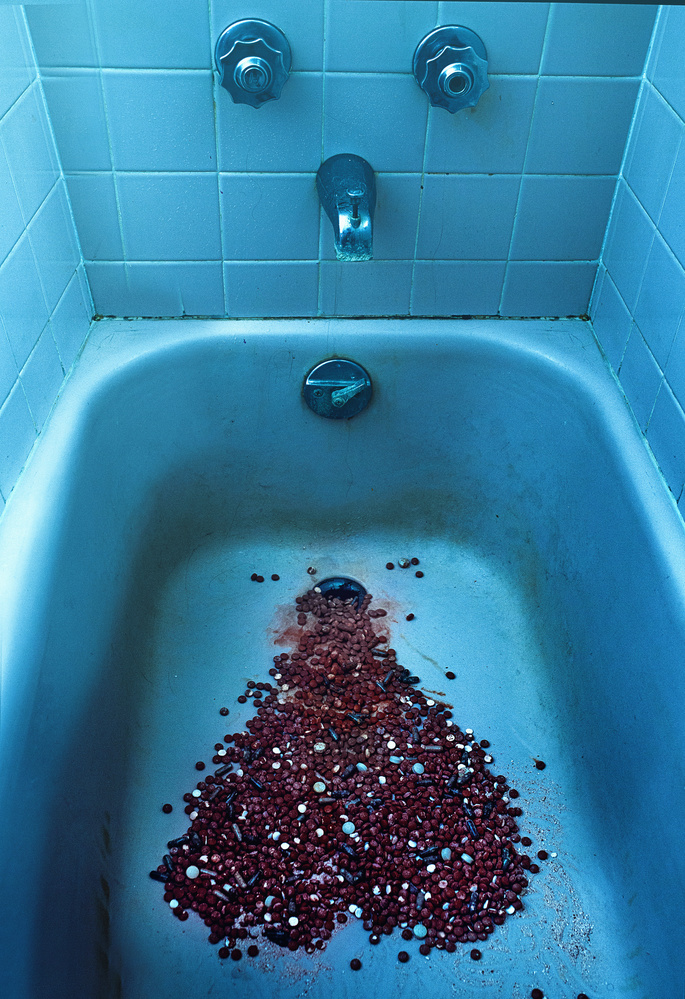 When I think of the word painkillers, I immediately think of a substance; some physical remedy to help people cope with pain. Specifically, my mind went straight to ibuprofen tablets. 3,000 of them, to be exact.

The plan was to fill the bathroom with these tablets and simulate what an overdose would potentially look like. I called all of my local pharmacies to see if they had a sufficient amount, and luckily one store had a dozen bottles left.

I went to the store and cleared their shelf. With a dozen containers of ibuprofen tablets in hand, I now had the daunting task of covering the entire bathroom with them. I knew it was going to be a long night (spoiler alert: it was).

It was finally time to set up and shoot the scenes. Before I started to scatter the tablets around the vicinity of the room, I first contemplated the feeling and mood that I wanted to convey. I knew I wanted the scene to feel cold and lonely, but I also wanted it to convey the sense of warmth and comfort that often comes with taking painkillers. The brightly-colored red tablets represent the physical and emotional pain that an addict goes through, and the blue ambiance represents the relief and tranquility that the painkillers provide.

Once I had the mood established, I went around the bathroom and wiped down the floor and countertops. I wanted to make sure the scene was empty and clean in order to counteract the bright red clutter of pills. This simple juxtaposition made for significantly more compelling shots, and really made the pills stand out.

Once the first scene was set up, I squeezed my camera (a Canon 5d Mark 3 with a wide-angle lens attached), a tripod, my computer and a bare bulb Aputure 120d LED light into the four-foot-wide bathroom. After close to eight straight hours on my hands and knees, I had sculpted five different scenes and taken hundreds of photographs. However hard the setup may have seemed, it was not nearly as hard as the clean-up. When I started cleaning up the giant mess I had made, the whole concept really hit home: Once you’re stuck in this mess, it’s extremely hard to get out. The notion that the grass isn’t always greener on the other side became a sudden reality. 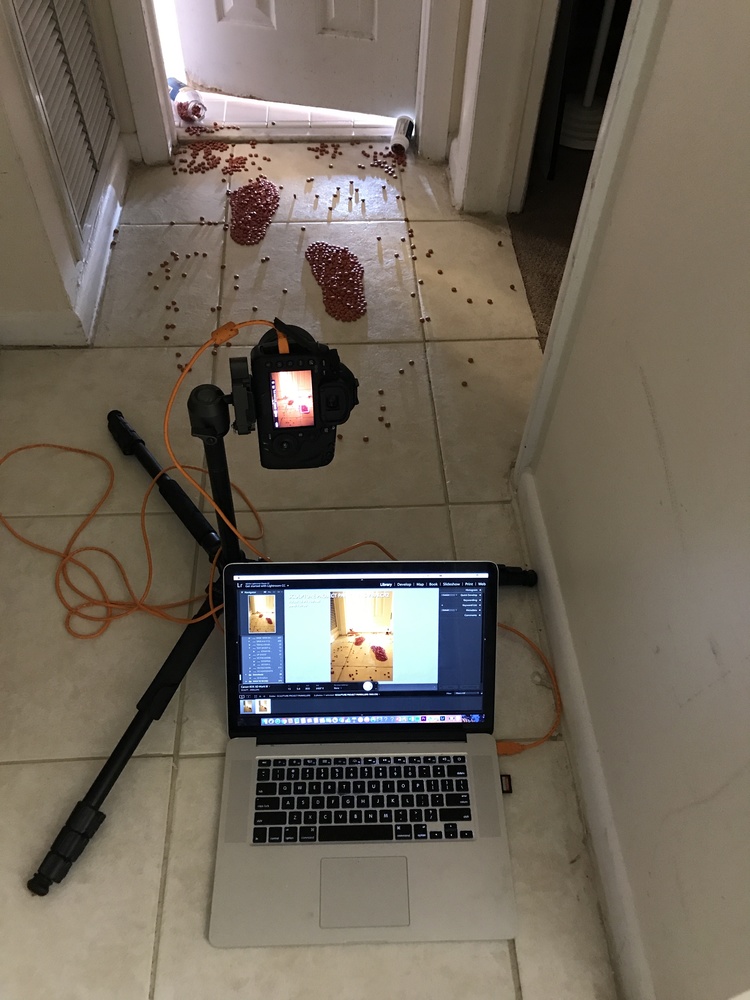 I've said plenty, but the real reason I share my art is for you to draw your own conclusions. How do these images make you feel? I would love to hear your thoughts in the comments below!

Do you have a personal project that you've been sitting on for months — or even years — that you've been hesitant to start? Grab your camera today and get out there! Sharing your unique voice and vision is a great way to make the positive change you want to see in the world become a reality. Make a difference with your camera; the world is waiting to hear what you have to say.

BTS / September 11, 2019
The Toughest Shoot of My Career? How I Shot this Series of Action Images

Hi, thanks so much for the kind words! Glad you liked this!

Stunning work. What lens did you work with?

Thanks for the kind words and follow! It was a rokinon Cine 1.5T lens for Canon mount! My favorite!

Thanks for the very kind words Eric! I really appreciate it!

The opening statement is that of bringing attention to a problem of the widespread use of drugs and drug addiction. Perhaps it was the choice of pills to use because a large batch of oxycontin would have proven far more difficult to obtain and may not have been as blood red juxtaposing colorful? :)
Living with extreme chronic pain and using ibuprofen to try and help manage it is different than having a drug addiction. The images work best, silently by themselves

You're right. I got a little carried away when describing it. :)

Hope you don't mind criticism. I usually hold a minority opinion on stuff like this so feel free to ignore.

The images would have substantially more impact if there was a human subject in the frame. Maybe I'm desensitized but these look like generic, albiet dark, stock shots. The lighting and processing is fine but the message just doesn't hit me in any meaningful way. The footprints look hokey.

Using ibuprofen diminishes the impact as well. It's in almost every household medicine cabinet. There's no shock value. Everyone's got it. You could have strewn coffee grounds across the floor and achieved the same effect (not much). It would have been better to use your craft skills to make them look like something more menacing. Easy enough with the right tools.

It's difficult to portray the human condition without a human. These just don't do it for me.

Also 986ish words to describe the shots? Too many man, way too many.

If you really want your photos to stand out, make them self portraits. Show how you interpret pain, suffering, hopelessness and dependency. It takes work to create an authentic expression. It would be more rewarding for you as an artist, rather than arranging some pills which even an unskilled hack like me can (maybe, on a good day) do.

Good message. Glad you're thinking about it and putting it out there. You just need to find an expressive subject to really drive it home.

Hello, thank you for taking the time to write this comment. You make a very valid and important point about the human element-and is something in the future that I will definitely keep in mind. The juxtaposition of the material world and human world would be a nice touch.

The foot prints actually were my own feet, and made out of the tablets.

In regards to the fact of using ibuprofen as the main subject in the shot, I will have to respectfully disagree. The reason I chose to use iburphofen tablets is to reference the point that this can happen to anyone, and with the most basic everyday thing that we all have. Sure, it's common, but if you take too many, and over consume, the effects are very much the same. I am a firm believer in depicting everyday occurrences as it what connects us as people. I feel like if there were more shock value, than it's not as accessible or relatable.