When a client came to me and asked if I could do a composite that featured a dragon, my first response was, "Of course, no problem. This is going to be so much fun!" Immediately following the conversation, reality set in and the haunting feeling that I had bitten off more than I could chew began to overwhelm me. After a momentary panic episode, I promptly began racking my brain on how I was going to pull off this impossible feat. Luckily in the end, creativity prevailed!

A few weeks ago, one of my regular clients contacted me about a little project they wanted my help on. During the conversation I was told that there would be three images created for a possible campaign pitch. The only catch was one would feature a zombie, one would feature an alien, and one would feature, you guessed it, a dragon. The zombie I could handle with no problem. The alien was a stretch, but I knew that I could figure something out. The dragon, however... What the heck?! After many tears, a sleepless night, and some chewed up fingernails, I made up my mind that I was going to figure this out and it was going to be epic (only kidding about the tears, I'm way to manly to cry). 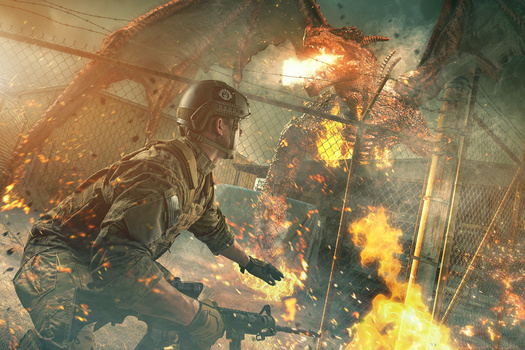 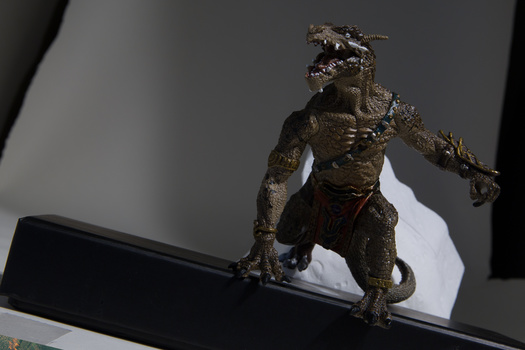 The first thing I had to do was assess the situation, determine the problem, and come up with a solution. I came up with three reasons why creating this image could be problematic:

1. Dragons are not real - This immediately ruled out renting, buying, visiting, tracking down, or any other possible solution that would work if it were say a lion, tiger, or bear, oh my!
*Sorry if I just crushed someone's dreams. I still get upset that a fat man in a red suit doesn't break into my house every Christmas and leave me toys.

2. Dragons are suppose to be huge - Even if I could find a suitable "fake" dragon, making it look the size it should appear could end up being an issue.

3. Lighting and believability - If some how I happened to figure out problems 1 and 2, how would I light it and make it cohesive and believable in the final image. My biggest fear was that it would just look like a giant fake dragon.

Following an intense brain storming session, I eventually came to a solution that I prayed would work.

1. Dragons are not real - I decided I was going to use a toy dragon. I scoured the internet looking for a suitable creature. I wanted one that had enough detail in its characteristics that it would end up being believable after a dash of Photoshop magic. I found one toy that was great, but it was some sort of mutant dragon that didn't have wings. I knew I needed wings, so I also ended up snagging another toy dragon from my friend's comic book store with some really great looking wings. I would have to combine the two in post.

2. Dragons are supposed to be huge - The toys I ended using came in at an "amazing" height of about 4 inches tall. Not ideal, but I figured I could make it work. Anyone who creates composites knows that it is all about perspective. I knew that if I shot these toys at the right angle, I could manipulate the image to make them look larger than life. I set the dragons up in a way that I could shoot from below them. Shooting from a low angle made sure that the perspective would match the angle I needed in the final shot.

3. Lighting and believability - Because the toys were so small, I knew that lighting them with my regular lights and soft boxes wasn't going to work. I decided to take a different approach. With the images above I took a simple basic exposure just using the light in the room. I set up the bathroom (you'll understand why in a moment), so luckily the light was on the wall and not the ceiling. This gave me a nice fill light from camera right. I decided the best way to dynamically light this little toy was to use light painting. I had to make sure I was in a room with no windows, which is why I chose my bathroom. With a small single LED keychain flashlight, I used light painting to give the dragon a nice rim light from behind where I knew the light would be coming from in my final image.

I knew I wanted to use an environment that had a good deal of depth and would also allow me to hide some of the imperfections of the toy. Once I found a suitable background, the key was making the dragon seem to be behind certain elements in the image in order to make him fit in cohesively and give the photo some depth. This ended up being the most tedious masking job I have ever done, but it was well worth it. Putting the dragon behind the chain-link fence and building ended up being just what the image needed to really sell the manipulation.

After a couple of photo shoots (to shoot my models) and many hours in Photoshop, I ended up with an image that I'm extremely pleased with. This image will now be a staple piece in my portfolio, and I learned a ton of valuable lessons throughout the process. I followed a similar method for the alien image using an alien glove I found online. The zombie image was much easier to execute thanks to the amazing make-up work of James Sizemore. All three images ended up far exceeding my clients expectation and this project has now transitioned into a much larger scale long-term project. This means I'll have even more of these awesome images to share in the future.

Never set limitations on yourself. Take on challenges with confidence and face your fears. The worst that can happen is failure, but the possibility to push yourself past your comfort zone into a whole new world of possibilities far outweighs the risk. Go now and create!

Share your similar stories or work in the comments below. I would love to see them!

Solid work! And thanks for crushing my belief that dragons are real.

Awesome image!!..you've inspired me to up my game man.

That means so much! Thank you!

Awesome work Brandon!! Such an inspiration.

Also, one of the key things you mentioned when taking this approach is that all your standard lighting gear goes out the window but the concepts remain the same. For portrait type stuff we're always looking for bigger light sources that are more flattering on the face. But for small subjects such as these even a bare speedlight can be too big of a light source.....it's no surprise you had to use a tiny keychain light :)

or you could just hire me and get a custom dragon :) http://artefactvfx.com/

Just curious... you do know the figure/toy is copyrighted/trademarked for the craftsmanship of the designer either unique specific designer or company who owns the original specs of the design. Would you have legal issues if you use the images for-profit?

I'm not 100% on this but I don't see why this would be any different than taking a photo of a car or piece of clothing. There is no trademark or anything like that visible. Good question though.

You are subject to a lawsuit especially if this photo was for money.
Toys are considered copyrighted work and it really depends on the company if they have an issue with it. I'm sure if you would replace your dragon with a toy M. Mouse doll the big D would add you to the pile of lawsuits.
Really a picture or personal representation of any branded item can fall under copy infringement, that's why most studios have prop makers from art work on the walls, toys, and cloths.

Examples I've seen.
Car companies have sued not only people taking photos of their cars but have also sued 3d modelers that make similar cars.

This is a great read
wipo.int/export/sites/www/sme/en/documents/pdf/ip_photography.pdf

That's why I'm even afraid to even try putting up any stock photos of cars cause they are patented designs. Some cloths are but only if they're very unique as most clothing these days is not super unique and copy/catted from tons of different clothing manufacturers for reasons we don't know (licensing the design?)

You have a very good question!

I, as an amateur lawyer, will say that there is no copyright/trademark infringement here unless it would be used as a commercial for a competing toy manufacturer. It is clearly presented as a generic dragon and does not take advantage of, or disparage, another brand for profit, it is merely a prop.

If I were this artist, I would be much more concerned about how much that toy company would pay for similar images.

Love that you took the challenge head on and created really great work.

Great job!!! Waiting for your next one :)

Terrific idea and even better execution!

Wow, that is freaking unreal! In a good way! Amazing job!

This is definitely cool and inspiring. Been using toys/miniatures also in my shots. Great work!

Love it, but the article reminds me of that old cartoon "..and then a miracle occurs!", where the critical step of going from start to finish is omitted. How about showing more of the process?

Spectacular images and article! I'm especially blown away by your fire, particle and smoke effects, top notch man:) where do you get those types of elements? Also how long have you been working with photoshop to make these types of images?

Why is the alien approaching the lineman? Just curious since I'm a lineman. I've seen your work before, I love it.

That just happened to be the creature the client wanted with the lineman.

Great article! I've been playing around with minatures/toy photography for the last year or so trying out many lighting techniques and I have had some fun results using multiple speedlights.
http://instagram.com/p/qB-2ltI6LF/