I don't know about your experience but I've found that about 50% of the agents who check me in at an airport have no interest in helping me when I claim to be a traveling photographer. Even though it clearly states on each of their airline's websites what media rates are and what I have to do to get them, they either act like they have no clue what I'm talking about or they ask for bullshit credentials that aren't actually required. The last time this happened to me the lady said she needed to see my "media pass and badge number." I explained that I was the owner of a media company and I could prove it multiple ways but she was unwilling to budge. That day we were charged $600 more than we should have been and it was the final straw for me. I vowed that day to make a media pass and share it with everyone on Fstoppers.

Here is the front of my new badge. 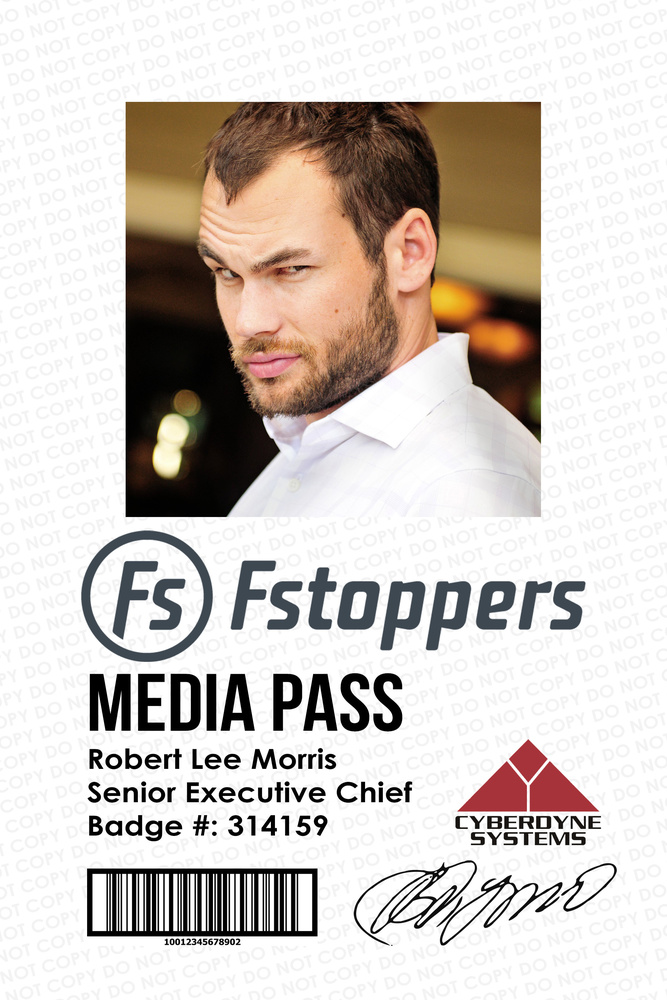 To make this media pass legitimate I made sure to add a badge number because the last lady at Delta told me I had to have it. I'm excited for her to type this number into her computer and search her badge number directory to make sure it's legitimate.

To make myself sound extremely important I gave myself the title of "Senior Executive Chief" to let the these baggage handlers know just how high on the corporate ladder I've climbed.

Behind everything I wrote "do not copy" over and over and turned the text sideways so that it would be impossible to duplicate. To enhance the badge further I added the Cyberdyne logo from the movie Terminator to give it a professional feel. I knew that I might want to pretend to scan my fake media pass throughout the airport so I searched "bar code" in Google images and added a random one to the bottom of the badge.

For the finishing touch I added Vladimir Putin's signature to the bottom of my badge to prove, without a shadow of a doubt, that I am indeed a photographer.

Here's the back of my badge. 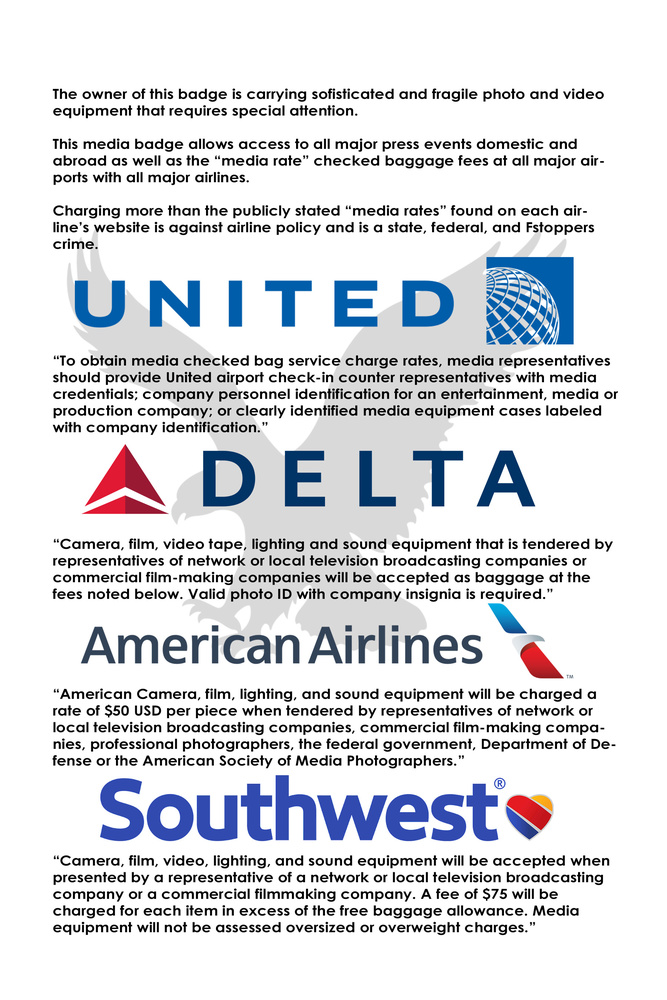 On the back of the card I put text explaining that I am indeed a photographer and I should be given the media rate for bags. Below that I added the rules from each of the major airlines that pertain to discounted media rate bags.

To make the back of the card official I added the eagle logo from American Eagle Outfitters behind the text.

How To Print Your Own Media Pass

If you want your media pass to look like mine you can download my Photoshop template here. If you want to make one fast, use the templates on the website below.

To print these badges I went to quickidcard.com. I clicked on "Make ID." I picked a vertical ID card template towards the bottom. When the template came up I clicked on "add new image" and picked the JPG I had made for the front and resized it to fit the entire card. Then I clicked "switch to reverse side" and "add new image," and I chose the image for the back. They cost $12 to print.

Have as much fun as you like with your design, just remember to use another badge ID number. We wouldn't want our official media pass accounts to become suspended when the lady behind the Delta counter discovers duplicate badge numbers.

UPDATE: I want to make it 100% clear that I am not suggesting that you make a fake media pass for another organization that you don't actually work for. If you use my template, change the Fstoppers logo out for your own photography business.

If you are a photographer or videographer you are entitled to the media rate for many airlines but some airlines require certain types of identification. Some gate agents will accept a business card, other will accept simply taking a peak inside the bags to prove it is indeed photo gear. But some agents require ridiculous forms of identification including "a media pass and a badge number." You are completely within your rights to create your own type of identification card with your business name on it. If you want to make yours a joke like mine, go for it. If you want to play it safe and make a legit "media pass" you're welcome to do that as well. But keep in mind that the term "media pass" is completely meaningless and "badge numbers" are made up by whoever made up the media pass. This isn't some regulated form of ID.

Since writing this I have been contacted by 3 other photographers who said they have printed out their own media passes for this very reason. One of them just told me that a gate agent told him "I don't care if you print out some fake media pass right in front of me, I just have to see a media pass before I can give you the media rate." These gate agents are simply afraid of getting into trouble and they are trying to follow the rules, no matter how stupid the rules may be. I'm just going to play their game because I'm tired of arguing about this every single time I fly with a bunch of gear.

My buddy also suggested that some agents want to see the words "commercial media" on the badge rather than just "media." My suggestion would be to put as many official sounding words on it as possible to cover all the bases. Patrick also had a good idea about adding text for your carry on bags that says "this person is carrying a bag containing lithium ion batteries and by law is not allowed to place this bag under the plane."

Business / May 31, 2019
A Discussion With a Global Marketing Director on How Photographers Can Get More Work

Thanks, Lee. I sometimes travelled and got checked and asked if I was really a photographer. I got no media pass and thought about getting one. I guess now I need to make one as well to save on the trip, especially on the internationally trip.

Lee, I can't decide if you are half-joking, or a half-wit.

I thought the "Cyberdyne Systems" and "Putin Signature" were pretty good indicators.

I just made one myself! Does your barcode link to a goatse site too?

Such a slave to fashion.

Seriously though, even a BS badge holds more sway at an airport than a copy of the airline's own media baggage policy.

Now we're all just acting like a bunch of kids in a sandbox.

Not sure which you looked at but don't google search for any of those.

Too late. I googled tub girl :(

Haha one of the best articles and comment threads in a while! Wonder how many gate agents will pick up on what's pretty much the least random badge number, ever.

bahahahaha! Lee you're a legend! I award you five internets for this gem :P

This is brilliant! Nothing screams legitimacy louder than Vladimir Putin's signature.

Don't need any bags since it has been shown the iPhone is as good if not better than a DSLR. Seems like a waste of time.

Always one in the crowd.

This would be true if I owned at Iphone 7 but I don't because it doesn't have a headphone jack.

Yeah that blows the whole deal because then you would have to pack a bunch of adapters and stuff. ;)

I'd wonder if I'd get away with keeping the Fstoppers logo on.. if they question it I can pull out an article on my phone and say "No look, no normal person scrutinises a Canon camera this much.. I must be legit".

The last thing we need is disgruntled gate agents after they've had to deal with an influx of fake credentials... just because you can fake something in Photoshop doesn't mean that you should.

Why not do the readers a service and direct them to a professional organization like ASMP if they don't have credentials from a proper media outlet. ASMP issues badges for their vetted members.

I agree. Not sure why someone gave you a thumbs down. Media/Journalist work hard, don't make a ton of money and the airlines provide them a small break. This is pretty much encouraging fraud to get a discount. If it gets abused, It will only make harder for real media/journalist to take advantage of this.

If you are your own company you should make your own badge.

To be fair, and despite Lee calling this a fake pass, this is actually a legit media pass for his company (minus the Putin signature). If the airlines do not offer a proper application or form and simply require a "media pass" that doesn't actually exist, then the owner of any media related company is free to make their own credentials.

Unless Fstoppers changes our guidelines (which we may now have to do), this is a valid credential for our own company. The text on the back simply states the terms each airline has published on their own site. There is nothing "fake" about it just like there is nothing "real" about ESPN making their own media passes. Now whether any event or organization accepts one's own company pass is a completely different discussion.

I think that Erik and Alexis need to look up what freedom of press, press ID cards and media cards mean.

From the ASMP website you linked "Please note that this badge has no legal standing and may not be acceptable at all locations."

Seems like they are just selling you a made up media pass as well. Depending on who you get at a gate check, this pass may not suffice either :/

I'm not saying being an ASMP member isn't worth it, but I can only afford to be a part of so many photographer organizations.