The Benefits of Interacting with Fellow Photographers Offline

Not long ago, learning and critiquing photography was done almost exclusively in person. With the rise of the Internet, we saw a fundamental shift in how photographers interact with one another. Yet, even with the opportunities afforded by the web, there is so much more to gain by spending time with fellow photographers in the flesh.

The year was 1995. Minolta had just introduced the first truly portable digital SLR camera. Film ruled the land. "Totes" had not yet been added to the dictionary. The Internet as a cultural phenomenon was in its infancy. If you wanted to get the opinion of fellow photographers, by and large, you would meet in person. You would bring a stack of prints, sit down and thumb through them one by one, pointing out things you liked and things you thought could be improved. Photographers often met with their colleagues for photo walks to learn each others’ processes and creative impulses.

Now, the Internet is ubiquitous. One can take a photo and upload it for critique faster than most people could even begin to unload their film and drive it to the local lab. In 2005, I would tell you this was a technological triumph: instant exposure and connection with more people than if you had put your photo on a billboard on the 405. Now, in 2015, I will tell you it’s a double-edged sword. It’s convenient, its reach is vast, but are you experiencing everything you can?

The Internet has provided me with some amazing photographic opportunities and experiences. I’ve landed jobs, learned techniques from masters, improved my work, and made some great friends. What more could I really ask for, right? A lot.

Falling in the Mud

In October of last year, Zachary Bright, Dani Diamond, Bryan Szucs, and I got together on a cold, wet, cloudy (Cleveland) fall day to trek through the South Chagrin Reservation, shooting rivers and waterfalls. By the end of the day, every one of us had either taken a tumble down a muddy hill, watched in horror as a piece of our equipment bounced off a rock, or wondered if our health insurance covered hypothermia as we stepped in a suddenly deep portion of a river and water poured in over our boots. 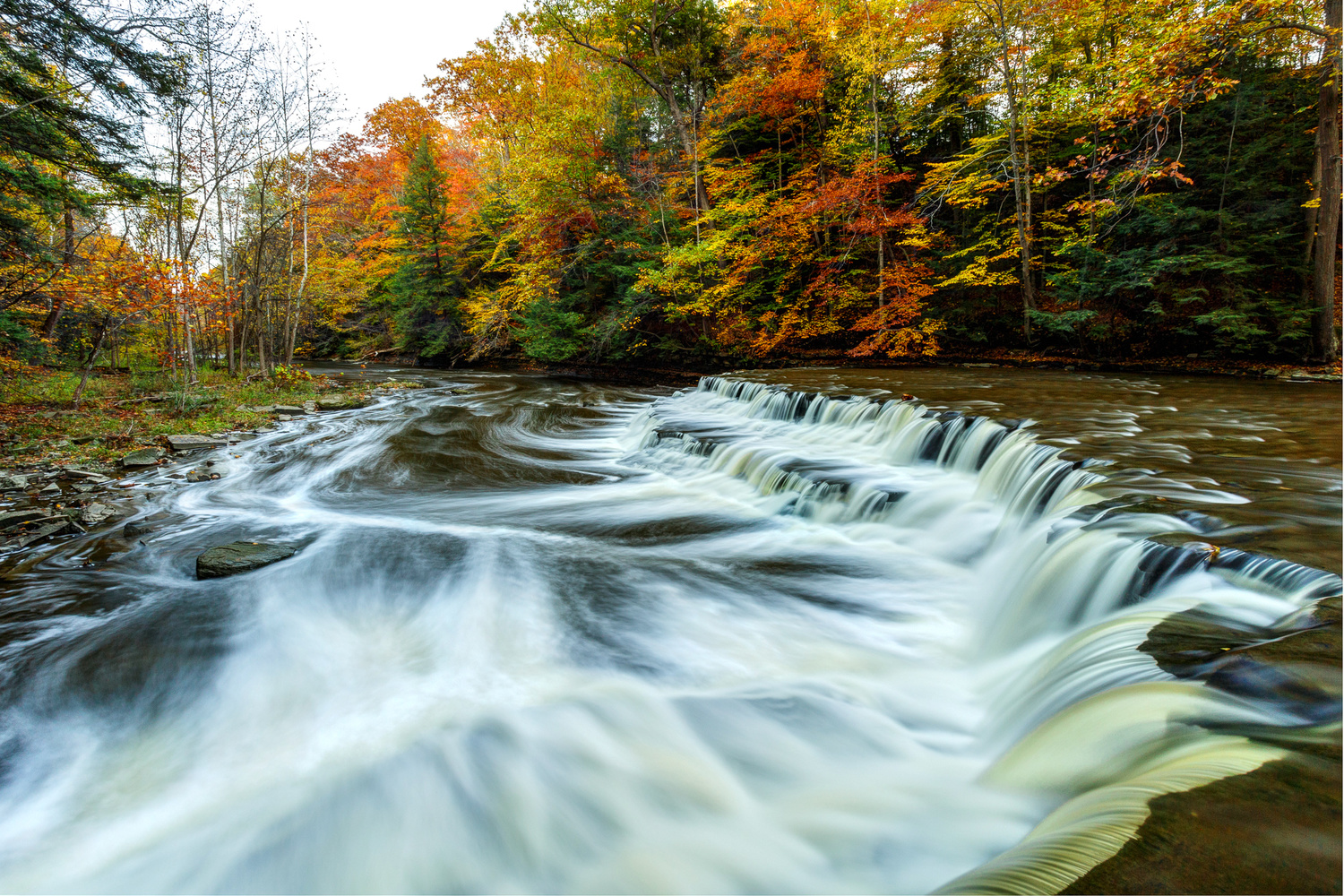 The river that soaked my boots so thoroughly, they took 3 days to dry

The truth is, I can drop things and fall over in moving water whenever I want. That’s basically my daily shower routine. The experience of trekking through muddy woods, wading through freezing water, and acting like a klutz all in the pursuit of a shot is infinitely more enjoyable if there’s someone there to laugh at me when I fall (and eventually offer me a hand once they stop said laughing), to discuss shots with me, and to show me their creative vision and techniques.

There’s more to going out with fellow photographers in person than just camaraderie, though. The Internet is great for instant gratification, but it’s not a total gratification. The problem (well, one of the problems) with critique on the Internet is that it doesn’t have context. No one can see and experience the unique shooting situation you were in. So many times, I’ve heard something along the lines of: “I love this shot, but maybe I would have taken a step or two back.” What that person didn’t know was that there was a cliff behind me. How could they? It’s not their fault. Even if I told them, could they really understand all the surroundings, all the context that went into making the shot? Of course not. They weren't there.

Falling in the Mud... Together

Sometimes, the best way to get critique is to have someone standing next to you when you take the shot. They can see the point in time and space where your creative vision, the surroundings, and your technique converge to create an image. They can see your process in real time, rather than attempting to infer it from a finished product. Conversely, you can make adjustments and try new ideas in real time. After I posted the images I took that day to some groups on the web, I certainly received some great feedback, but by no means did I feel like driving an hour and trudging back into the river just to adjust a few minutiae. Even more importantly, sometimes you simply can’t do that. Photography is full of one-chance opportunities.

From a learning perspective, there is so much value in in-person interaction. We learn tasks through repetition and seeing causal results. This is exactly the opportunity afforded by these sorts of outings. Feedback on the Internet, no matter how well-intentioned, can be too abstracted, too divorced from the process to adequately implement at times. Photography is a hands-on profession that requires hands-on experience to master.

For me, however, the best part about working with other photographers in person is the respect and camaraderie. Let’s face it: photographers have been known to be a bit snippy and unforgiving on occasion. Combine this with the relative anonymity and ability to disguise one’s qualifications that the Internet affords and you have a recipe for disaster. Don’t get me wrong, the Internet is full of helpful, caring, and qualified individuals who want to help you grow if you can wade through the muck. The problem is that it’s also the world’s greatest enabler; it makes it too easy to sling vitriol.

On the other hand, being in the same physical space as someone reminds everyone of our shared humanity. It reminds us that that person shares the same desire we do to make good art — art that fulfills basal human desires to express and connect. It reminds us that perhaps a friendly touch that inspires growth is more beneficial than dismissive blanketing criticism. In-person interaction garners the kind of tact and respect we all desire for ourselves and that we should all give to our peers. I promise my rose-tinted glasses aren’t too thick here; of course, there are plenty of people who are equally unpleasant to interact with in person as they are on the Internet. But I must say, I’ve never seen photographic discussions devolve in person in the spectacularly dramatic and overwrought way they often do on the Internet.

All this being said, I’m not knocking the Internet. It affords us opportunities that simply wouldn’t be possible elsewhere. It’s just not the only place. Don’t become so invested in it that you miss out on valuable opportunities to learn and build friendships. Get out with some photographer buddies, join a local photography club; it’s totes the best.

Education
10 Crucial Values You Need to Know in Landscape Photography

Education
How I Hashtag My Photography for Social Media

Education
Does This Bias Stop You From Being a Better Photographer?

I would also suggest joining a local photography club. The monthly meeting has a presentation from a photographer about a topic when there is no club contest (2-3 times per year). The members are helpful and open. The camaraderie of the club is a big boost.

I have some gear to review, so I took a friend shooting this morning. We got some mule deer photos, and tried out Manfrotto's Off road line. Much better than time at the conputer.

Some great points here! That river trip was fun for sure. I look forward to mutual near death experiences soon.

This is so true!! I was getting so bored with myself and my photography and I felt lost until my friends and I started monthly photo walks. Now I am totally revitalized and I feel creative more than ever.