Two summers ago, I attended a music festival in Italy, where I had the opportunity to attend a master class given by Louis Andriessen, a prominent figure in new music composition. Classical musicians are known for striving for perfection, so when I opened one of his scores and found the following note regarding the ossias (alternate passages of music), I was struck:

“If you can avoid taking the ossia passages, you might fail as a singer, but you will succeed as a musician.”

Photographers often remind me of classical musicians in the sense that they ceaselessly seek a technical perfection in their images, whether that be through lighting, gear, post processing, or whatever aspect you care to name. It’s admirable; rarely have I seen a photographer notice a flaw in an image and say: “it’s already good enough.” That endless desire to perfect every detail, to constantly improve is a large part of why the photography world is full of driven, unbelievably talented individuals whose curiosity, willingness to learn and commitment to their craft set standards for all of us.

But have you ever asked yourself whose standards you’re striving toward? Who set the standard in your photographic world that highlights must never be blown, that a shot where the eyes aren’t perfectly sharp must be tossed? There is nothing inherently wrong with these ideals, but have you asked yourself if they are your ideals?

There’s nothing wrong with emulating the techniques and ideas of each other (and I do mean emulating, not copying). That’s how major art techniques are generally taught. It’s often easier to relate to another person performing an action than it is to an abstracted idea.  The problem arises when we don’t question why we’re emulating that person. Justifying a way of doing things by “because (this photographer) does it that way” is an appeal to frail logic. It’s something I’ve been guilty of many times and something many of my friends have been guilty of as well. It’s easy to appeal to the authority of leading figures. If we truly want to emulate those figures, though, we should ask ourselves how they would justify it. Surely, a leading artist can’t justify a technique because… the leading artists do it. The higher we climb up the artistic ladder, the shakier that foundation becomes.

I’m not one to speak for others, but I know that at least for myself, that sort of justification just feels hollow. Even worse, it tends to pigeonhole us as creators. Following great artists is the means, not the end. After all, Picasso said: “learn the rules like a pro, so you can break them like an artist.” In the modern world of photography, where the complete photographer must know a myriad of ideas, techniques and philosophies, finding an artist who has mastered them can help to distill our thoughts and focus our minds.  There’s just one thing it doesn’t provide: originality.

If we never take our own risks, we can never discover our own voice; we can never justify the infamous “why did you do that that way?” with a confident “because that technique enabled me to bring to fruition the vision I wanted to express.” This isn’t to say that every experiment will be successful, but if one follows an idea to its eventuality, even if that idea turned out to be wrong, that’s where one often finds the deepest enlightenment. There’s nothing inherently wrong with emulation, but be sure to experiment along the way. A lot of history’s greatest artistic moments came from mistakes. It’s easier to walk a path that others have already walked, but if we never stop to look where the road branches off, we’ll all end up at the same destination and that, at least to me, would make for a far less interesting and fulfilling world.

"Nothing is a Mistake."

Martha Graham once said: “There is a vitality, a life force, an energy, a quickening that is translated through you into action, and because there is only one of you in all of time, this expression is unique. And if you block it, it will never exist through any other medium and it will be lost.“ We each have an authentic, unique self. It’s our job as photographers and as artists to find that authentic self. We must learn our technique so we have a full range of expression, but then we must free ourselves from the creative influences of that technique. It is our tool; it is not our vision. We should never stop learning, stop becoming, stop chasing perfection. The more we learn, the more we know how to explore. Corita Kent said, “Nothing is a mistake. There’s no win and no fail. There’s only make.”

Of course, I’m not without a pragmatic side that says there’s an appropriate time to experiment and an appropriate time to stick with what you know well. After all, a large proportion of us make money as photographers and in those situations, we owe it to clients who have sought us out for a particular vision to deliver on that vision. After all, I don’t think a headshot client would be particularly pleased if I returned their shots looking like they were slowly melting into the ether because “I was going through a real Clarity: -100 phase!” I wouldn’t be pleased either if it was my headshot.

When given the opportunity, though, experiment. Impose ridiculous constraints on yourself. Try a new technique, even if others don’t use it. You’ll be much better off if you decide not to use it because you tried and realized it does not fit your creative vision. But once in a great while, a wonderful small miracle occurs and that experimentation yields something far greater: something original that fits your vision perfectly, something that is your artistic essence and yours alone, not something filtered through the essence of another. That’s really what we all want at the heart of our expressive nature anyway, isn’t it? And of course, don’t forget to have thick skin. Photography is a complicated and never-ending learning process that can often feel overwhelming in scope. Always take time to experiment, though. You might fail as a photographer, but you will succeed as an artist. 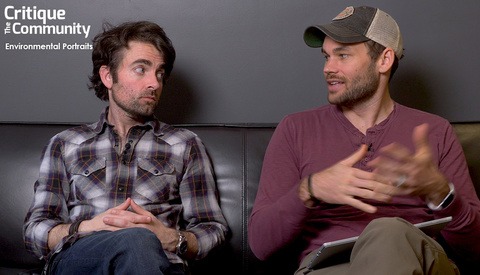 Great article Alex. I especially appreciate the quote you added from Picasso - “learn the rules like a pro, so you can break them like an artist.” As someone who is new to professional photography I am in the "learn the rules" phase and Fstoppers has been instrumental in my learning the rules and I'm certain in how to break them as well. These past several months of learning about digital cameras, professional photography techniques and post-processing software to name a few of the subjects I am trying to take in, have been like drinking water from a fire hose. Since starting this journey the question of where this will lead me in terms of developing my aesthetic, my style, is always in the back of my mind. I'm looking forward to that "eureka" moment, if such a thing exists, when I can say that I've found my voice, my style. btw I have to say that your ability to write cogently about both very technical topics like MTF and very subjective topics like "finding your voice" is quite impressive. Thanks again.

Thanks so much for your kind words, Ray! I really appreciate it. I'm so very glad you've found Fstoppers to guide you in the learning process. It's a lot to take in, particularly trying to balance developing technical ability and aesthetic preference simultaneously. You're smart to keep both on your mind while you learn! Please don't hesitate to contact me if you ever have any questions I can help with!