Behold the Power of Gesture!

When you think of the elements of an image that make it successful and interesting most photographers immediately refer to the powers of color, form, texture, light/dark, and visual rhythm. There is another that is often overlooked: gesture. Unlike the other elements, gesture can't easily be preplanned into your composition; it's a fleeting thing. However, when you add in an interesting gesture to your frame, it's transformative.

The dictionary says that gesture is the movement of part of the body, especially a hand or the head, a form of non-verbal communication. Most of the information that we get from other people is from body language with gesture being a key method. Let's take a look at some things to think about when photographing people: gestures.

When photographing people, unless they are being specifically directed or asleep, they will subconsciously create gestures. Even if they are by them selves their body will respond to whatever internal dialog that they are having and they will more their hands, and face in a dance of physical communication that in many ways that are not aware of. Basically everyone does it. If you see a person with an interesting look, in interesting light, and you can make an interesting composition of them but they are just sort of blankly standing there, just wait. They will eventually do something, maybe subtle maybe not, but they will do something that will physically reveal an element of either internal or external dialog.

I saw this fellow bowling earlier, and knew from my observation of him that he made some odd "think faces" before he released his ball. The poor guy couldn't help himself, and his squint made a funny moment from what could have been a very boring frame. 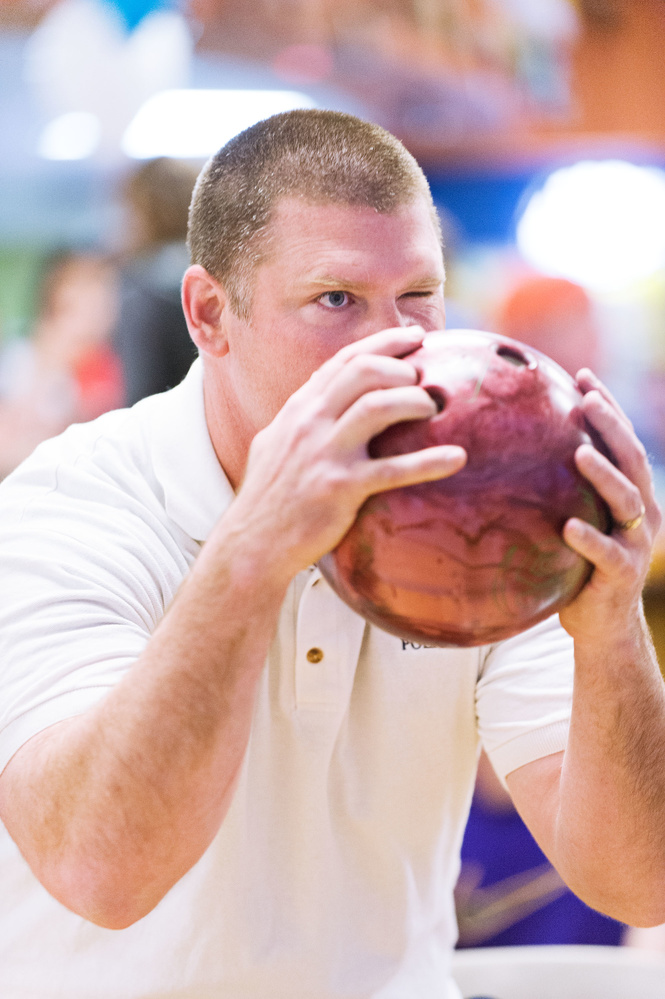 I love watching peoples hands. Most people are more expressive with their hands than they think. I was doing a shoot in a leather goods plant, was initially drawn to the repeating patterns of these fashion belts, and how the whole frame was essentially monochrome. Then after a few shots I noticed that at this certain point in the inspection her fingers curved to mirror the buckle but also had a certain amount of elegance that I thought reflected the overall theme of the photo. 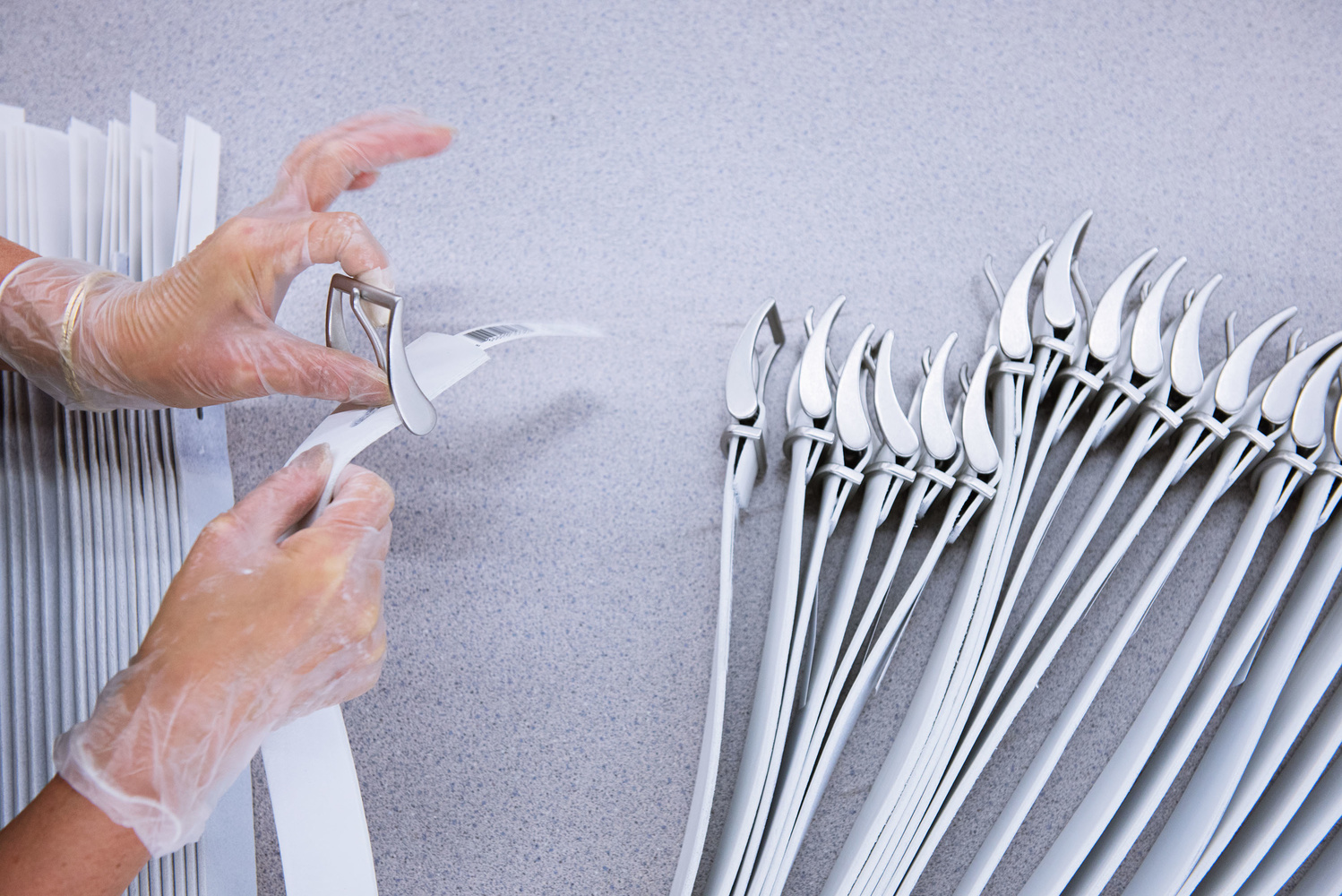 Some Gestures Tell an Internal Story

Pride, fear, confusion; sometimes you can tell immediately what's going on with the person in the photo. The expression or gesture tells it all. When you see someone, take a second, or a minute, not just see them but try to read them from their body language. Can you figure out what their internal dialog is? If, say, two people are are in conversation, and one is mainly listening, what sort of energy is the listener giving off? Do they like the person that they are listening to? Is the story funny, sad, intriguing? There is going to be a physical reaction from the listener to that story. It won't take long. Wait for it. When that expression, that gesture happens it will only happen once so be ready.

The more subtle the internal dialog is, the more subtle the gestures tend to be. When I saw this gentleman listening to a very tender story being told by his good friend I could feel his thoughtful care. I took a few steps and using a long lens went in fairly tight so that his finger tips and eyes did all the explanation. 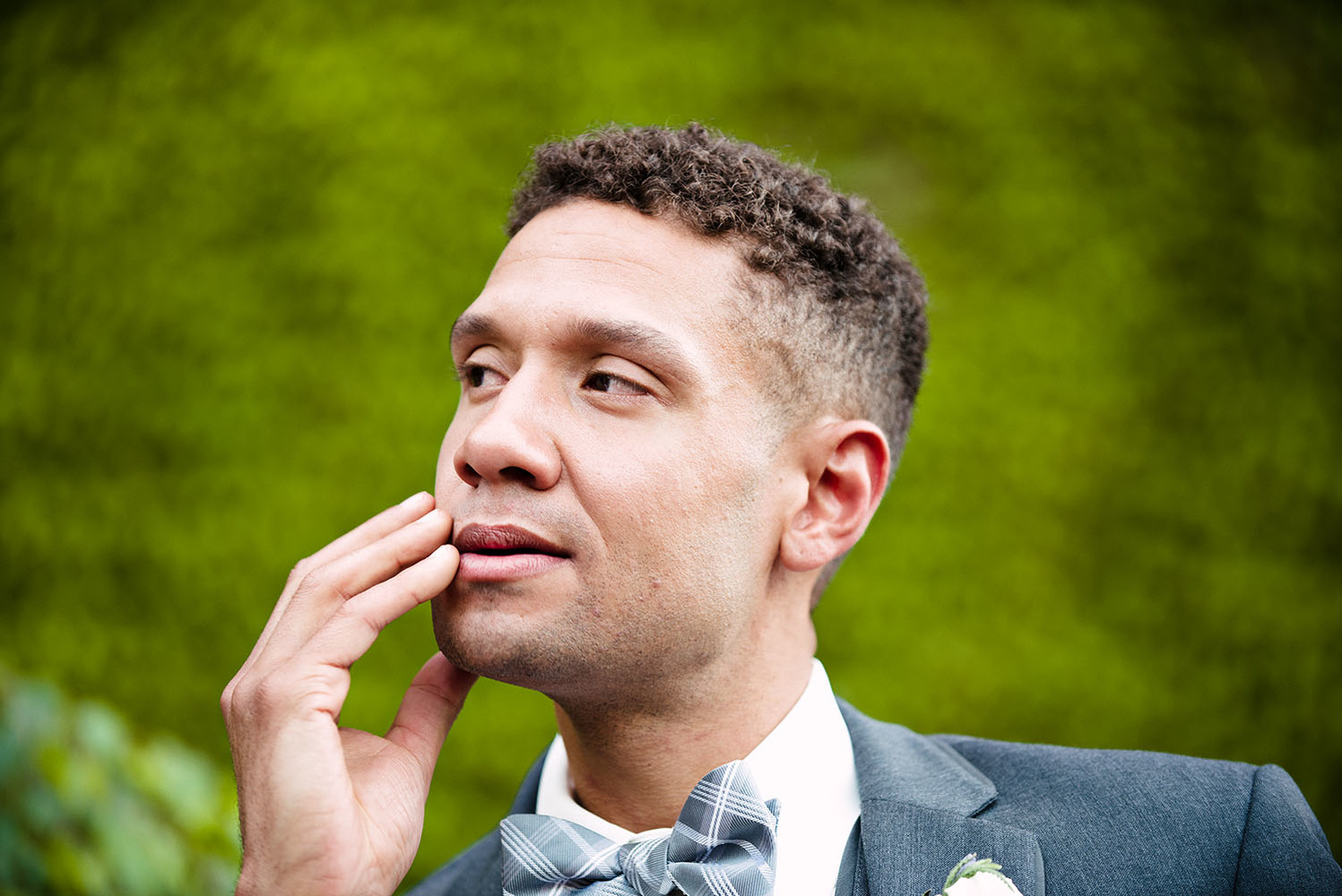 Big emotions usually express themselves with large gestures. When an obviously emotional moment is happening with the subject, go wider to include their hands if not their whole body. When this fellow was suddenly hit with a clump of snow falling off of the roof I made sure to show his whole body, and how he both physically, and emotionally reacted to the sensation. A wider lens showed all the necessary context. 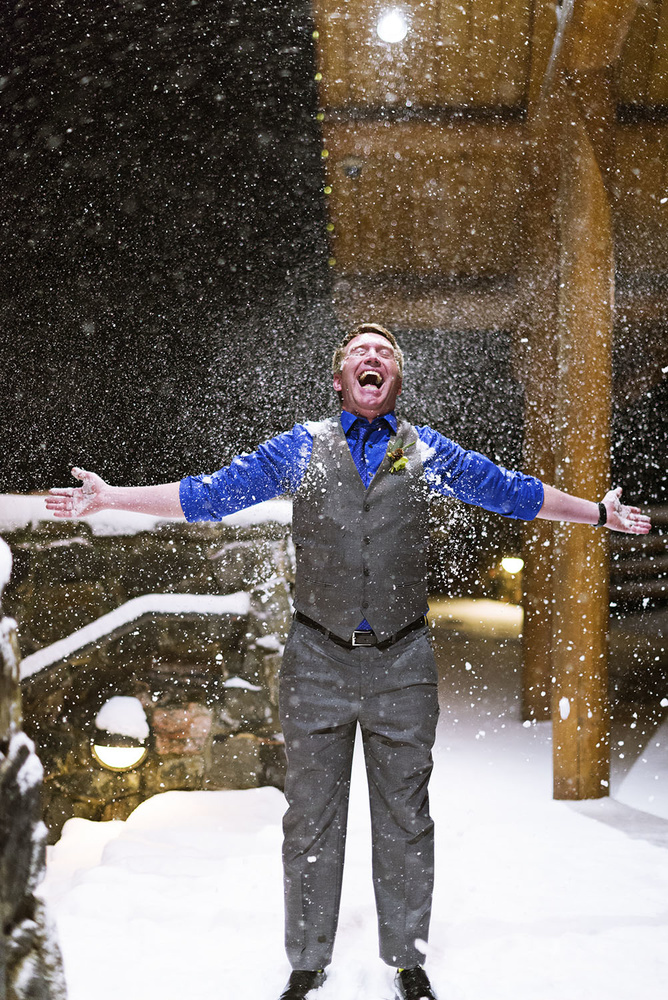 Some Gestures, Happily, Make Us Guess Why

I have a thing for ambiguity, oddness, and the delightfully incomprehensible. Sometimes people will do things that unless you are on the inside of the conversation or internal moment, well, it just doesn't make any sense. That's alright by me so long as it makes me wonder what is going on. It can draw you in to become not only a critical part of the composition but in essence the whole mysterious story. If the gesture not only looks interesting but seems disconnected, shoot it!

I have no idea what she was talking about. She seemed to be having a good time but her expression along with her claw like hand doesn't seem to naturally go together. Wonderful. That juxtaposition gets my attention. 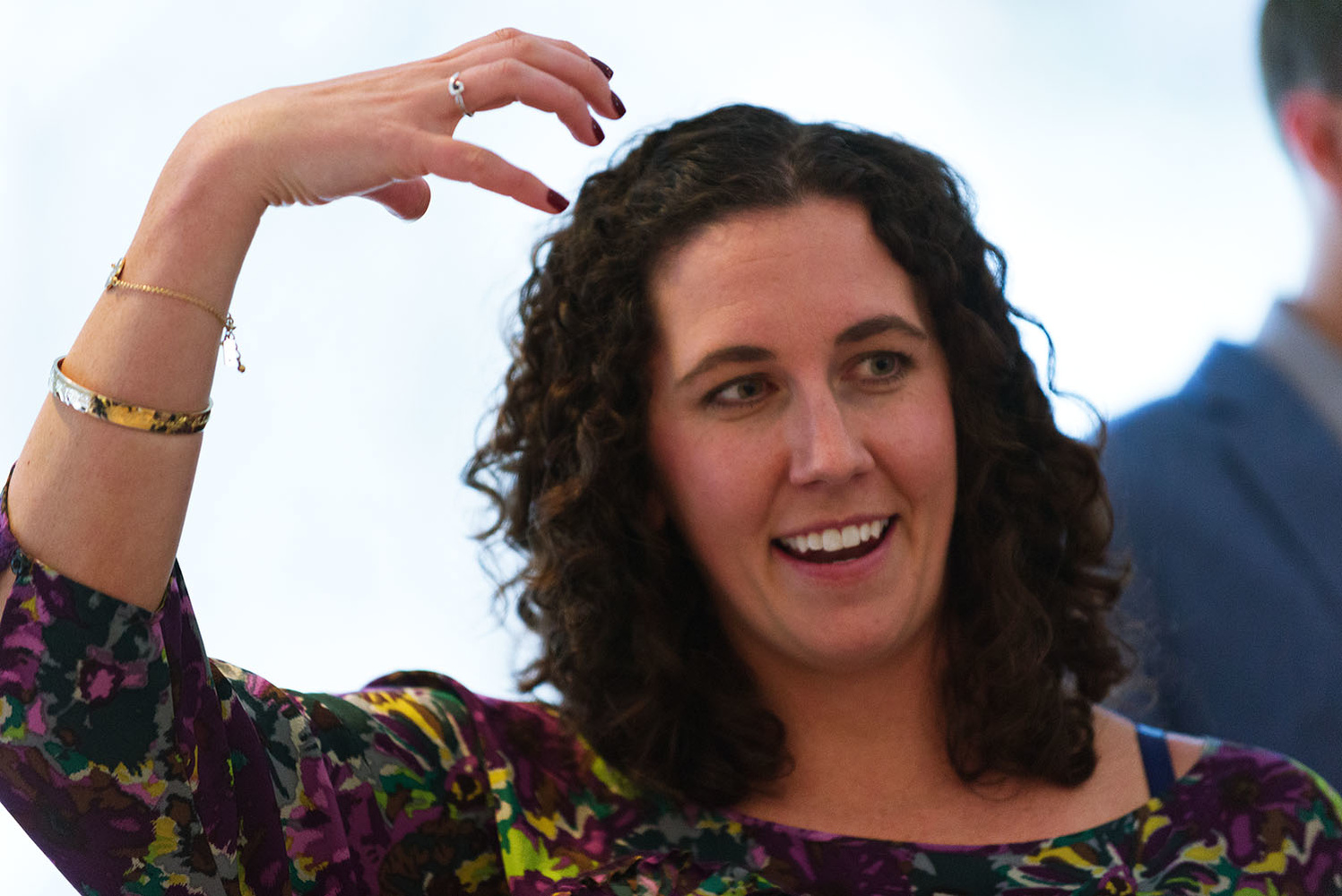 There is go much going on in this frame that I don't know where to start. The mystery is everywhere. The guy on the left seems almost smug,  his hand thrust forward in a casual but slightly provocative manner, the dude on the right appears to be slightly guarded with his hands pulled into himself a bit. Then there is the lady in the middle, her face obscured by the cocktail that she is draining, her curled fingers framing the glass mirroring the hand of Mr. Left. What's going on? So much expression, and it's all wordless. I love frames like this because of the layers of silent dialog. 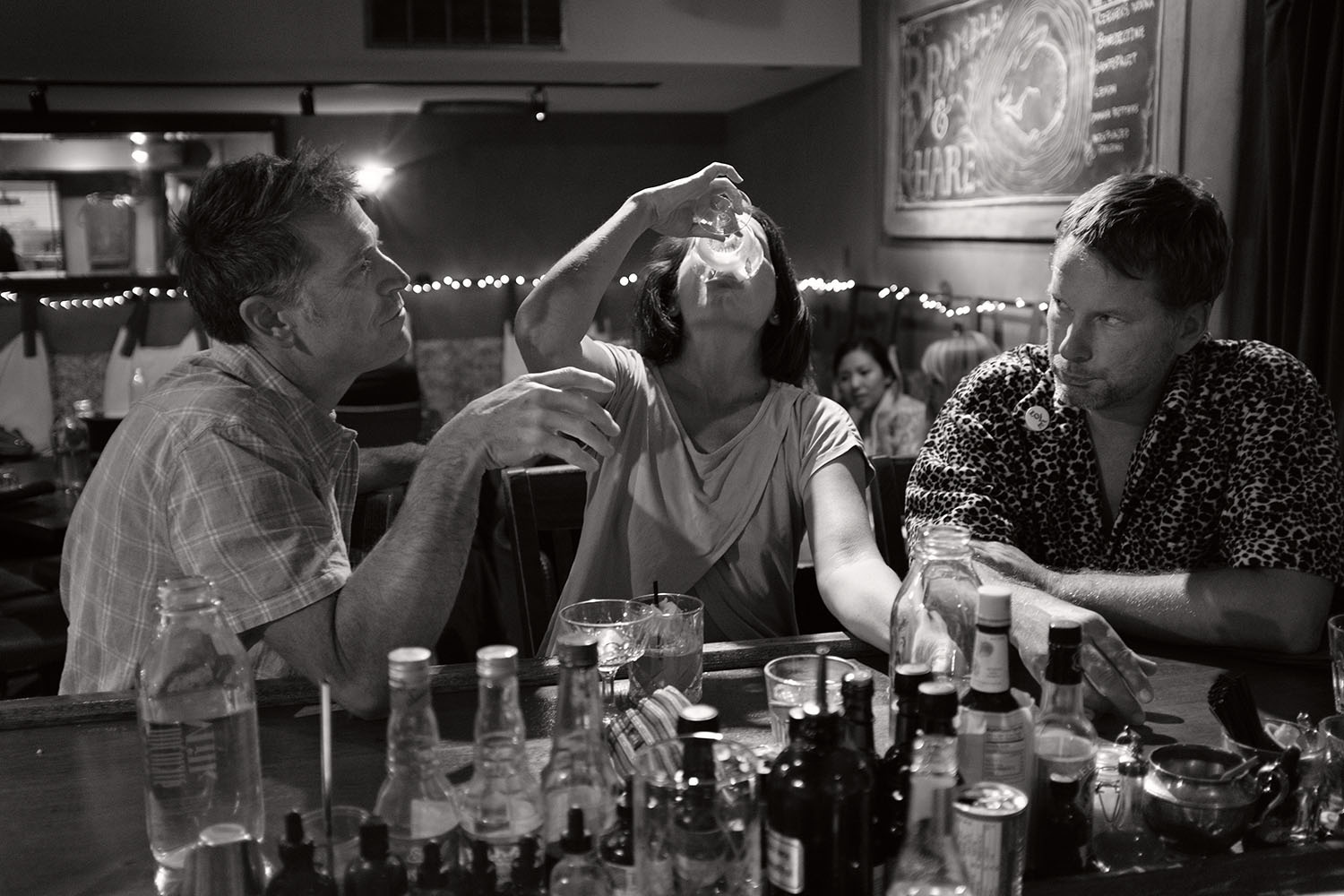 Learn to Listen to Their Body

I found that one of the best things for my exploration of gesture was spending a lot of time photographing sports. In order to get good sports photos you have to predict the quick motion of someone that you can't direct. It's not about reacting so much as anticipation by watching what they did just milliseconds before. Good sports photographers learn to read the subtle, and very quick movements of the athlete so as to know not only what they will be likely to do next but be able to time the frame at the right moment. This takes a lot of practice, understanding of body mechanics, and in non-sports settings, behavior.

For example, if I were to be behind home plate at a baseball game with a long lens, like my 400mm f/2.8, I can regularly get a photo of the pitcher throwing the ball so that the ball is right on his finger tips. After shooting maybe six throws I can pretty much get that shot with every subsequent throw by the same pitcher. Why? Because I know the throwing motion in general but more importantly know how to watch the motion of his shoulder/elbow in the throw. Each person throws a bit differently, and the timing of the shoulder/elbow are the tell-tales to when the hand comes out to release the ball. To get the ball right on the finger tips means that my timing has to be +/- 1 millisecond or the ball is either still in the hand or a good ways off of the fingers. Every sport has motions that, as a photographer, you can predict because you see them already in motion.

Outside of the sports world people move, and react to things in sudden but predictable ways. The hands and eyes give it all away so pay attention to them. If someone starts to move their hands, especially if towards their face or directly away from the body, then be ready to shoot them doing something that could be interesting. I'd rather reactively get a photo of someone just reaching up to scratch their nose, (ugh), because it could have been him putting his hand over his mouth in shock, (excellent). Who knows? It's all unfolding before us and it happens so fast. Regardless start paying attention to all of the ways that your subjects physically react to both their inner and external worlds. Be ready to get those little gestures which will add new layers of interest and complexity to your images. 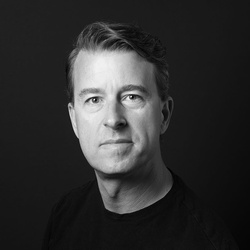 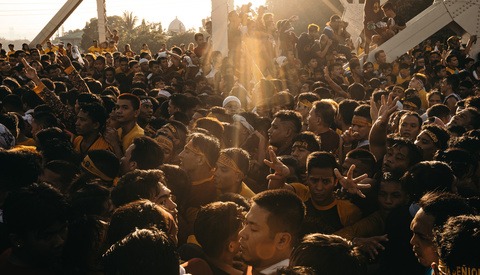 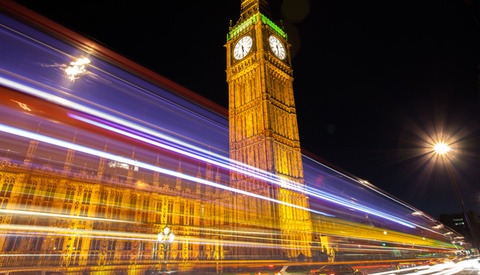 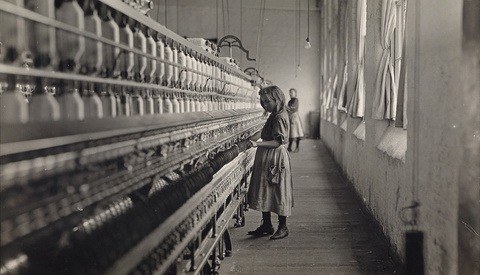 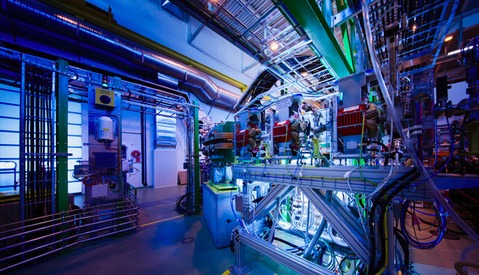 Architecture / October 6, 2015
See the Epic Photos from the Exclusive Photo Walk at CERN
Log in or register to post comments
3 Comments

Great post!
The advice is super important and clear.
Thanks a lot!

thanks this is a really good post, thank you for sharing.
https://aboutpetguide.com/

Mar 13, 2020 - We spent 40-plus hours testing more than 50 recommendations from educators, experts, and parents to find the best educational apps and ...
https://educationalappsao.blogspot.com/2020/09/educational-apps-for-stud...