Devotion in Photographs: Shooting One of the Largest Religious Events in the World

Devotion is an idea difficult to capture in photographs. In this interview, photojournalist Jilson Tiu from the Philippines shares his experience photographing a religious tradition practiced by a massive number of devoted believers.

The feast of the Black Nazarene in Manila, Philippines is one of the biggest annual religious events in the world, called the "Traslacion." Brought into the archipelago by Galleon ships from Acapulco, Mexico in the year 1606, this image of Christ, carved from dark painted wood by an anonymous Mexican sculptor, is believed by its millions of devotees to be miraculous. 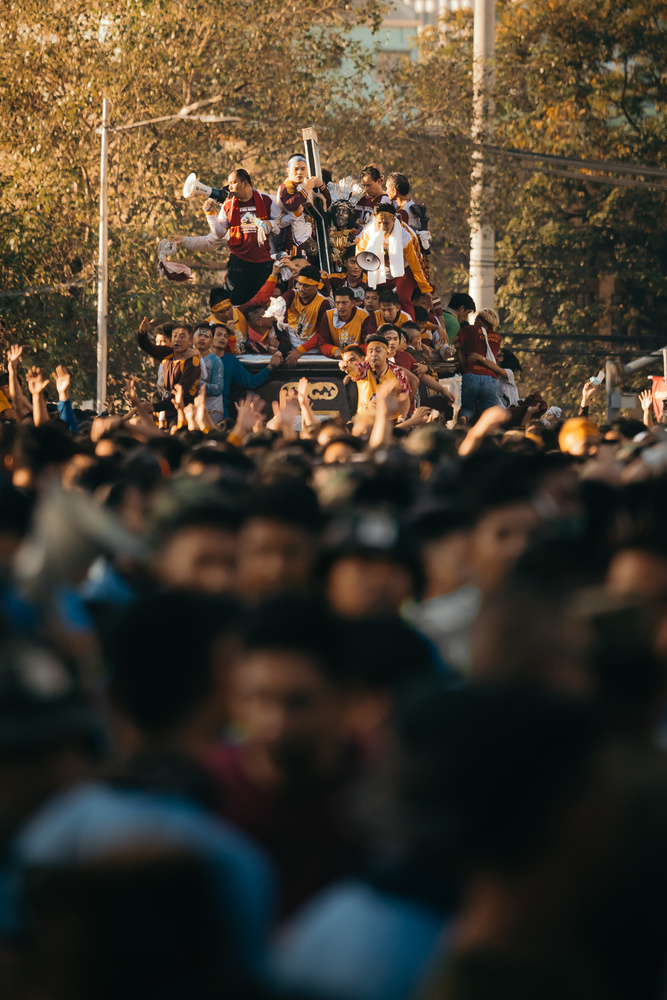 The image of the Black Nazarene being washed forward by the sea of devotees. Photo by Jilson Tiu

Every year, on the 9th of January, the wooden statue housed in the Minor Basilica of the Black Nazarene leaves the church for a 16-to-20-hour parade around the city of Manila. The route is not really that long on its own; however, the procession extends that long due to the millions of devotees that flood the streets to see it or even touch it. The statue that depicts the passion of Christ carrying the cross before his crucifixion is believed by these devotees to be miraculous. The believers of this tradition come every year to join the image in the procession, to symbolically be one with Christ in that suffering. 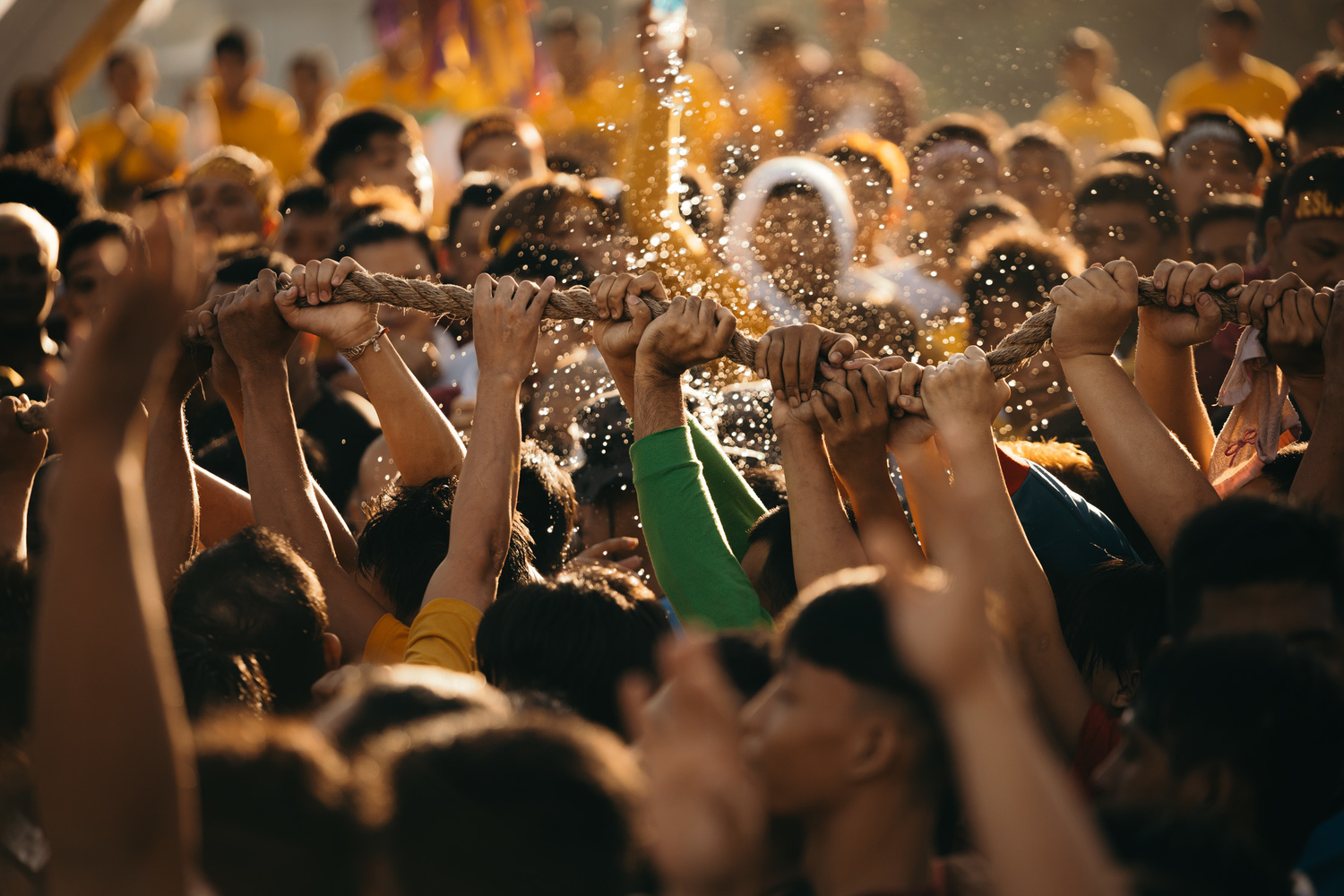 Devotees pulling the rope that moves the wagon of the statue

The photos in this article come to you from freelance photojournalist Jilson Tiu. These photos depict not only the devotion of the people who embark on this yearly tradition. Embedded in these photos are the stories of how people young and old, coming from diverse demographic backgrounds, risk both life and limb to signify their faith. 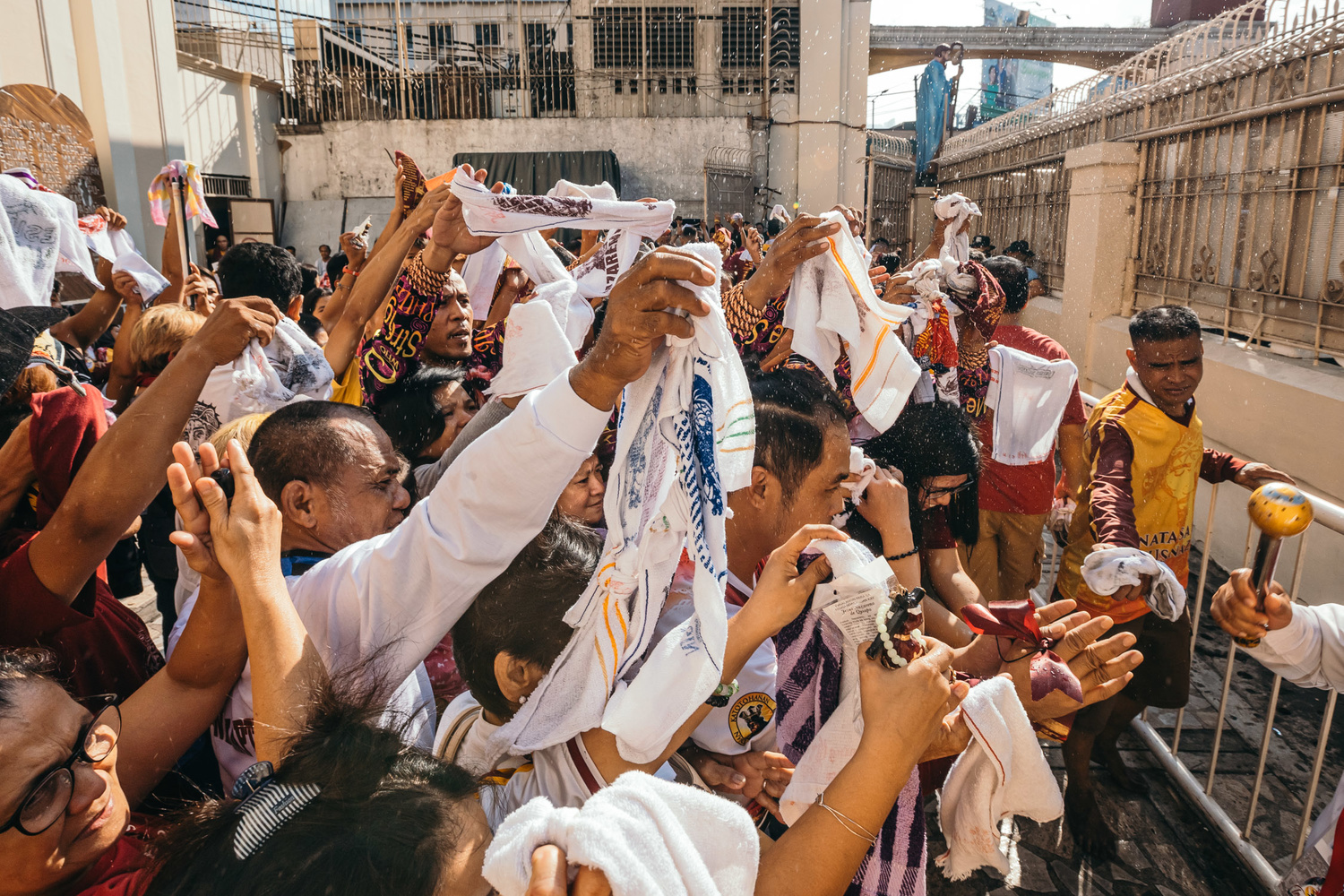 Towels meant to be wiped on the statue or blessed by a priest. Devotees then use these on their sick loved ones praying for healing. Photo by Jilson Tiu

Two Sides of the Stories of Devotion 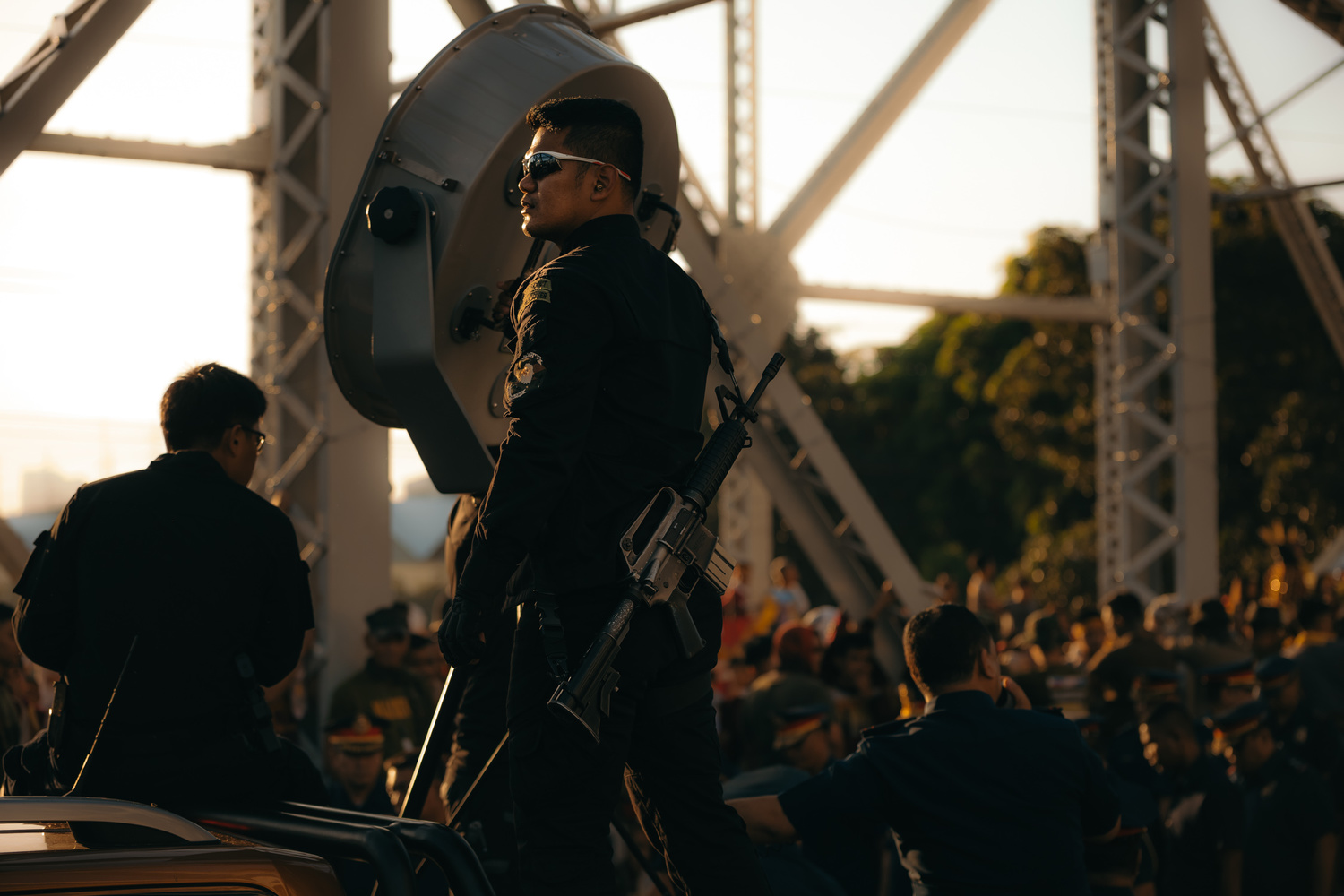 Military men on high alert for any security threats. Photo by Jilson Tiu

In almost every year that this tradition is practiced, there is news about people suffering from physical injuries or even death from being pushed, shoved, or even trampled on by the sea of people that walk with the religious icon. Even more, it’s a regular occurrence that people end up in brawls with other devotees and law enforcement in the struggle to get close to the miraculous image and even wipe religious articles on its surface. For this year’s procession, Tiu relays that much of the conflict happened because of the changes in the procession route. In efforts to decongest and hasten the flow of the procession, changes were made that lead to conflicts between the police and devotees trying to pass through blocked off roads. 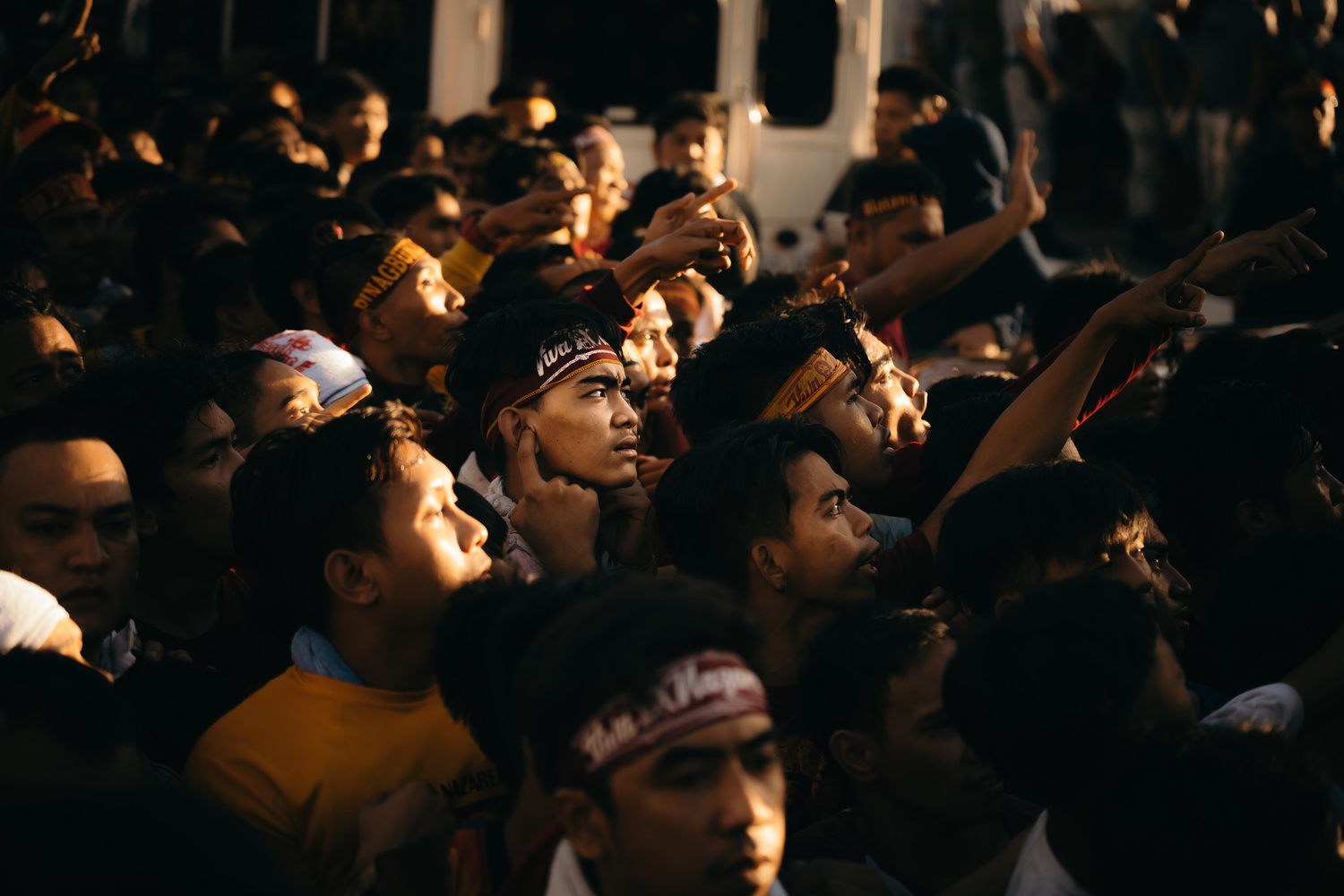 As a street photographer known best for his brilliant illustrations of everyday life in Manila, he hopes through this photo set that he may shed some light onto both the admirable devotion shown by the people in his photos, as well as the consequences of disorderly practice of this tradition. People getting hurt, unnecessary conflict, and a long trail of trash left behind by the devotees are actually quite negotiable. 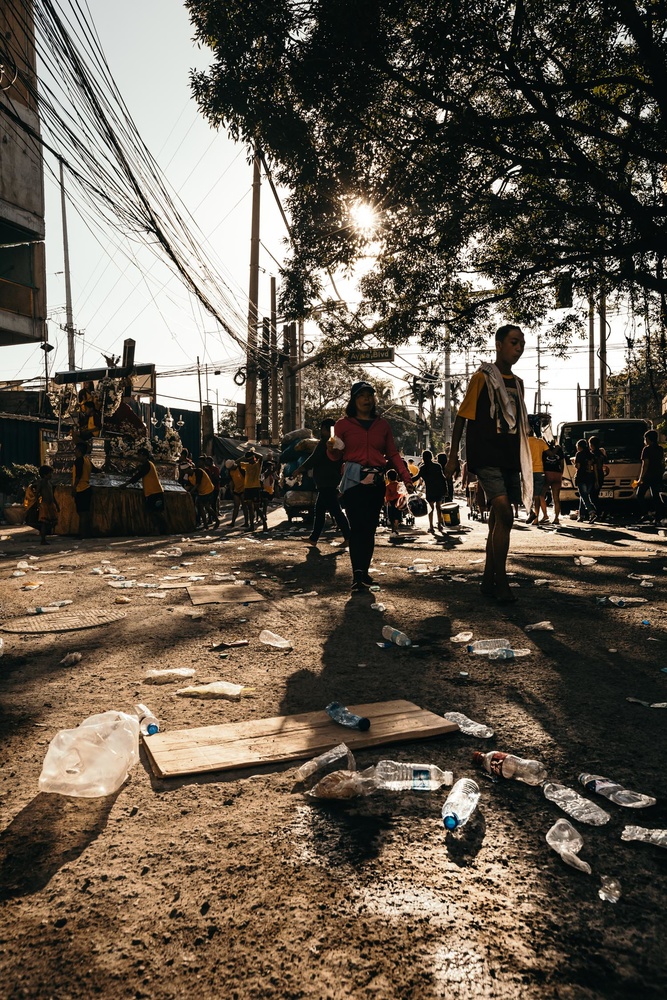 Heaps of trash left on the path. Photo by Jilson Tiu 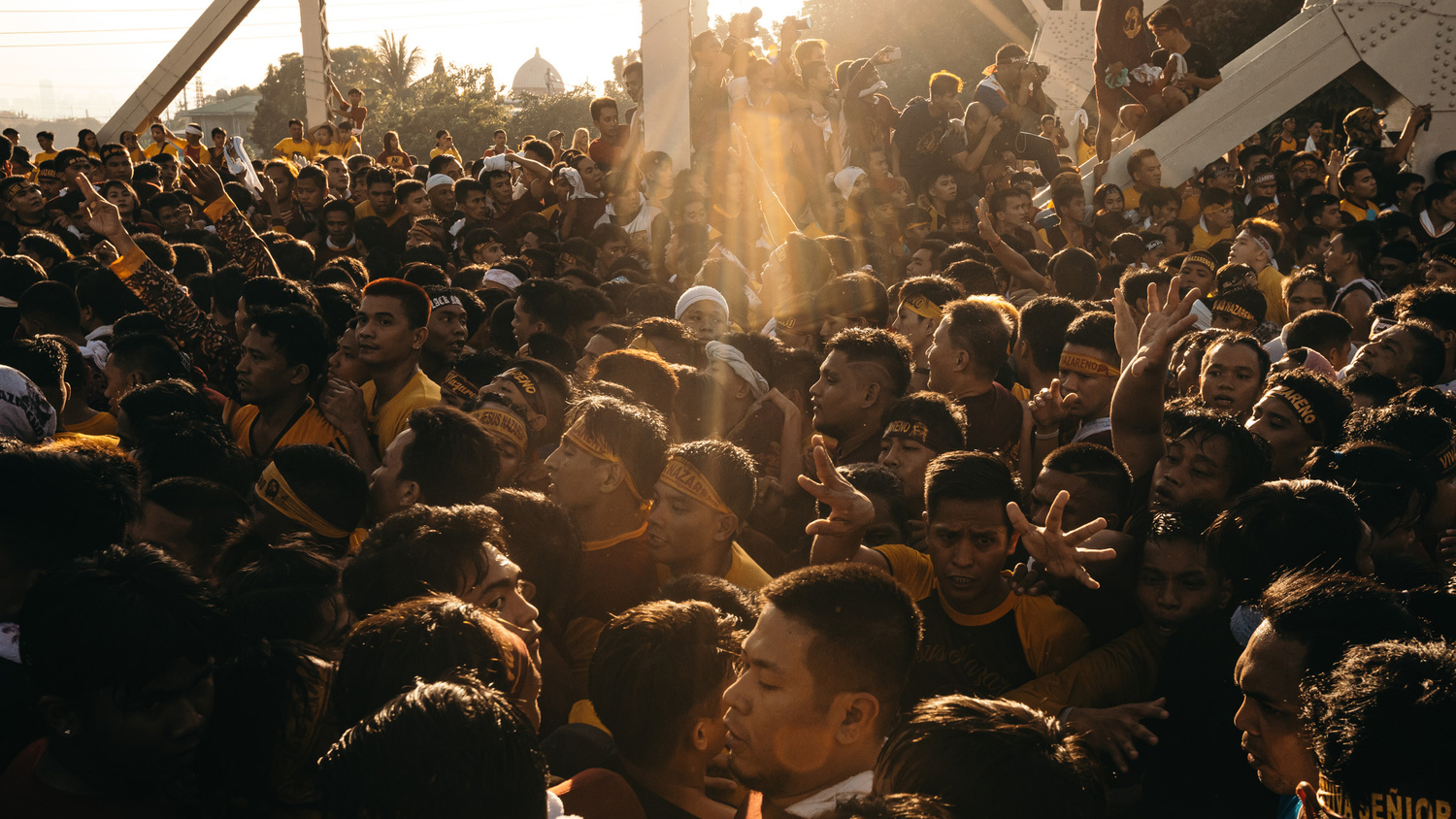 Tiu’s photos were taken with a Canon EOS RP camera with a 70-200mm and a 16-35mm lens. He relays that photographing events like this requires a lot of stamina and patience. It’s one thing to be able to walk the nearly four-mile route while squeezing yourself through the crowd, and it’s another to keep the composure to still be able to shoot with artistic vision. It pays to plan and find your vantage point early (which is an understatement since many devotees start to fill the streets the night before) and bring minimal yet capable gear. Carrying sets of lenses and multiple bodies while walking tens of thousands of steps within the procession can take its toll on your creative process.

Photos shared with permission from the photographer.

Opinion / March 13, 2020
The COVID-19 Pandemic Is Shutting Down the Photography Industry on Every Scale

Contests / March 4, 2020
The Sony World Photo Awards Has Lost Its Credibility as a Competition

Neat tradition and fascinating photos, but I can't help but think that Jesus would not want his followers hurting each other just to see an image of him.

can't help but agree. that's why many of us are just calling on them to do it in a more disciplined way.