When President Trump announced he would be skipping the White House Correspondents' Dinner to speak in Harrisburg, Pa., right in my backyard and on day 100 of his presidency, it was like the stars aligned. Among many avenues, I’m a stringer for a Harrisburg news journal, photographing politics and business news. Immediately after hearing the news at 10 p.m. on a Saturday night I applied for credentials and the wait began. A week later, on day 99 of the Trump Presidency, it was starting to look like I would be watching from my couch. With just 24 hours to spare, I got the green light. Here’s a behind-the-scenes look at what it was like to photograph President Trump from a local photojournalist’s perspective.

A few hours ahead of the event start, the press area was already filling up on the arena floor. The national news outlets had tables reserved front and center, among them was the New York Times. President Trump was scheduled to arrive at the Pennsylvania Farm Show Complex at 7:30 p.m., though it’s not uncommon to spend the majority of the day getting into position then waiting for an event to start. Thousands of people lined the parking lot and started to pour in hours ahead of the President. We had enough time to discuss our approach between the photographers and writer. Knowing that the White House Correspondents' Dinner was scheduled for that night, we expected the media to take heavy criticism in President Trump's speech, but weren't sure if he would address his absence from the dinner directly.

Getting settled in, with two hours to go, I started to check my angles. I photographed former Vice President Joe Biden earlier this year where I positioned myself on the risers along with most of the photo and video crews. Risers provide an unobstructed view above the crowds, but once the event starts you're stuck. Each footstep can cause tripod mounted video cameras to move ever so slightly, which their operators understandably despise. Plus the risers were already pretty crowded and I wanted to keep mobile. Via Twitter, we learned just ahead of the event start that Vice President Pence would also be attending.

I had two cameras and my primary Pelican case in tow, loaded with redundant gear. I was using Nikon D4 with a 24-70mm f/2.8, and a Nikon D800E with a 70-200mm f/2.8 VR II and 1.4x teleconverter for extra reach at 280mm and 36 megapixels of resolution to work with. The D800E did well but the buffer needed to be managed, being much more shallow than the D4 and D3s buffers I typically work at events. I had a tripod to hold my spot but decided not to set it up and instead headed outside to photograph the immense crowds lining up at the door.

There’s an overwhelming narrative that I don’t often hear from the perspective of an individual reporter. We’ve all heard “fake news” and “alternative facts,” but there’s more to examine than just another tweet or late night show sketch. As I walked against the flow of the masses, I felt constant glares shooting through me from the majority of people in line. I was expecting a reserved sentiment but I wasn’t expecting the comments, which stopped just short of outright threats. My White House Press Pool badge had the letter "L" on it and someone made the comment that "the media are labeled L for liberal." The remarks continued so I pocketed my press pass, but still had two DSLRs slung over my shoulders that gave me away. A few people walked right up to me to ask angrily if I was with a particular media outlet. Another insinuating that I’m lazy as I stood watching for two moments to come together in the frame. We’re months past the election yet the anti-media rhetoric came out in force. I did my best not to instigate, did my best to be polite and explain that I’m with a local paper, but the anger on people's faces remained.

Having gotten the photographs I needed outside, I headed back inside under the protection of Secret Service. I took a position on the floor that offered an unobstructed view of the podium, watching for tangents around microphones and teleprompter, and another covering where the Vice President and President would be entering. From that spot, I had two different backgrounds available and could still move around. Vice President Mike Pence walked into uproarious applause at 7:38 p.m., and President Trump followed suit 11 minutes later.

Once President Trump started his speech, protestors started showing their hand one by one. Quite a few were escorted out and some even arrested according to a local TV news outlet. One protestor shouted, “Trump is a traitor!” while throwing Russian flags into the air with “Trump” printed on them. The atmosphere was electrified with the arrival of each protestor. Supporters yelled and covered the protestors' faces with political signs, blocking cameras, and corralling them over to police. Smiles and high fives filled the arena as protestors were walked out. Other members of the press were suddenly behind me trying to get the shot. Had I been on the risers, I would have missed all of the protestors that were taken down right in front of me. To go one further, the whole night I was eagerly on the lookout for President Trump’s photographer, Shealah Craighead. As luck would have it, I was in the right place at the right time, briefly spotting her working at the absolute conclusion of the event. Taking this angle wasn't much of a risk but it pays to do something different.

President Trump himself proceeded to directly attack the media. He first targeted a couple of choice news outlets before directing his attention to the press pool as a whole, with the roar of thousands jeering at us as we fastidiously worked on the ground floor below. In his own words, President Trump remarked that “if the media’s job is to be honest and tell the truth, the media deserves a very, very big fat failing grade,” going further saying journalists are “very dishonest people.” Of the event, the allegedly “failing" New York Times wrote, “Trump Savages News Media at Rally to Mark His 100th Day.” Indeed. It’s a bizarre thing to watch professional men and women from established news outlets work quietly and without retort, as a crowd that size and including the President of the United States, publicly berate them. It shed light on how one person's ideas can spread to so many and how quickly situations can erode, and there was practically nothing anyone could do to oppose it.

As our small band of rebels colleagues walked across the parking lot after the event, I heard my name being yelled through the open window of a passing vehicle. Good friends of mine were inside, having been attendees of the event. I doubt they were among the voices yelling out against the media, but it became intimately clear that we're all in this together.

It is a tremendous honor to photograph the President of the United States. I am humbled to add another president to my photojournalism portfolio and another story to tell. All politics aside, the office of the President and Vice President command respect. At the same time, a free and independent press deserves the same. The current anti-journalism narrative has many justifiably concerned for the protection and perception of the First Amendment, including Columbia University's Dean Steve Coll. Journalists are not at all the enemies of the people, but it seems as though many enjoy coming together in hatred of these “enemies of the people.” How many is hard to really say, though I’m willing to bet they are in the minority. In the words of former President George W. Bush, "I consider the media to be indispensable to democracy. We need an independent media to hold power to account. Power can be very addictive and it can be corrosive and it's important for the media to call to account who abuse their power.” In my own view, the importance of integrity, professionalism, and bold reportage by a free press are more important than ever.

Must've been exciting! I'll only say one thing... many "journalists" hate his guts, so let's not pretend they're all honorable and objective, like they should be.

How do you take photographs while going through life with your eyes shut?

How narcissistic. You reply to your own comment with 'good job'!

I wonder if the real news media refuses to cover a Trump rally, is it really news?

EVERYONE covers Trump whether they like him or not. He's ratings gold!

And Saturday Night Live is now reality. Any time I see Sean Spicer on TV, I instantly think of Melissa McCarthy.

Sorry...I don't watch television and have never seen Saturday Night Live. I have no idea what you're talking about. :-/

Thanks.
Well, I've never seen Sean Spicer do a press conference so I'll have to take your word she's close enough for it to have been funny. :-)

I am a Trump supporter and like him as our President. So I have a bias. haveing said that, I thought your coverage was fair and coverered the event honestly. My perception of the media is not favorable. I really demand a free press and the right to write and photo what you or the media wants. At 71, its so important to have this freedom. I did not like President Obama and his policies , but I did pray and gave my opposite views in an honest , clear voice without the emotionis attached. I heard a preacher say. " God offends our minds to expose our hearts". I found this to be true for me.

My primary life income has been health insurance broker. Up close I saw a what Obama Care ruined folks lives financially. And some of low income folds save theirs. the new law (health care) passed by the house will make it worse. I hope it does not pass the senate and gets a major redo. I am agains our President on policy but not toward him. I would like to see all media keep the issues to principals and not personalitys.

From my distorted lens, Our President looks like a use car salesman on steroids, loo. I did not vote for him because of his looks. Give history some to time to judge President Trump. enjoy my poster satire 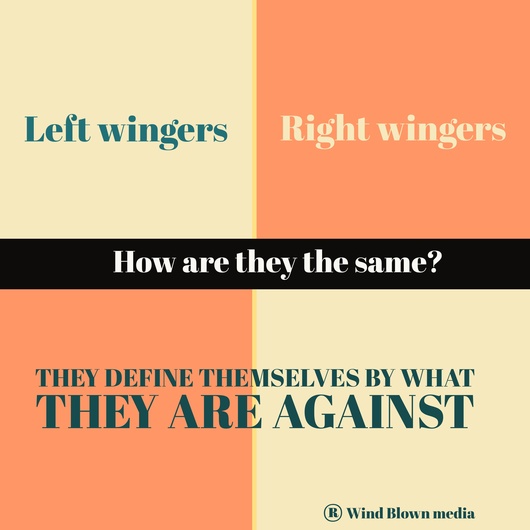 Thank you for sharing your view.

I photographed him three times for The Biz Journal. The crowds were very entertaining. I've never been booed or harassed in my 19 years of shooting. I should have been more professional, but it did get to me. I would walk right up to anyone that was yelling at me and just ask why? Those interactions were made me judge people, something I've been trying not to do most my life. I acted smug and laughed at the situation but all in all, it was sad on their part and my reaction. Trump was about 4 feet away from me on one of the assignments, and he asked me if I had a real camera? I was dumbfounded and was nervously laughing and honestly didn't have anything to say because the interaction was so odd. He then proceeded to ask all the veterans around me if I looked like one of them. Drive-by media and the fake news was all you could hear after that. Just silly. 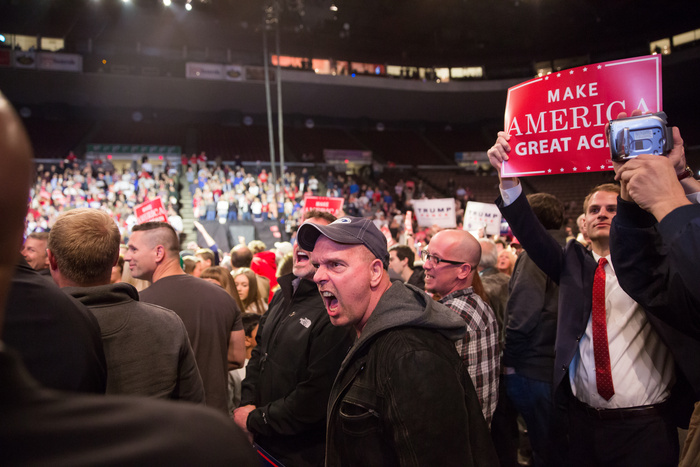 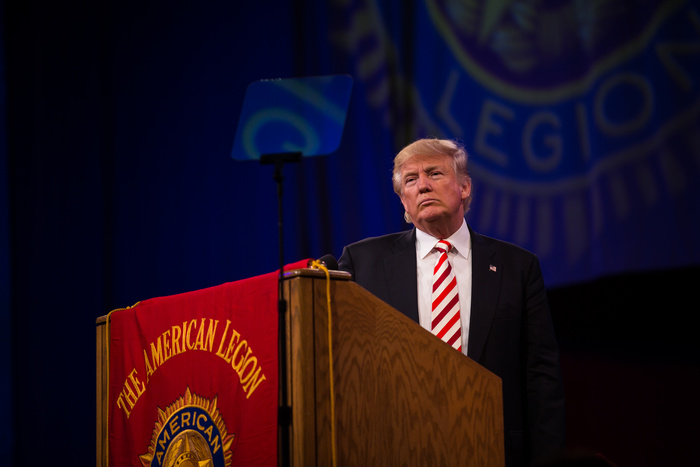 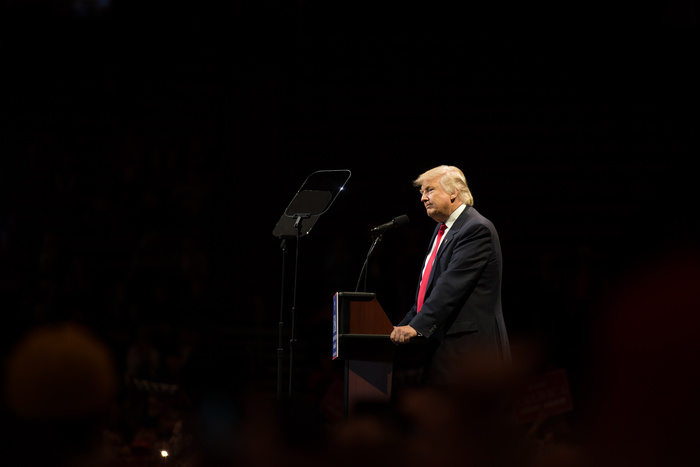