Vaping is a phenomenon that has swept across America and much of the First World, mostly as a safer alternative to cigarettes. The culture, however, is what has caught the attention of the media worldwide. Smoke tricks have likely been around for as long as humans have been inhaling smoke, but vaping has spawned something quite interesting out of it: smoke tricks and ridiculous plumes of vapor spilling out of people’s nostrils. Photographer Louis Amore (whom we featured last year with his portrait series of English veterans) went to a local vapor shop, Prohibition Vapes, to document a vaping competition.

Amore told me that he was never aware of the culture that surrounds vaping. “I couldn’t quite work out how a competition would work, but Billy, the owner [at Prohibition Vapes], showed me some videos and I was pretty amazed,” he said.

The series was conceived upon his stumbling into Prohibition where he had gone for coffee. He went on to tell me that, initially, it was a strange feeling for him. 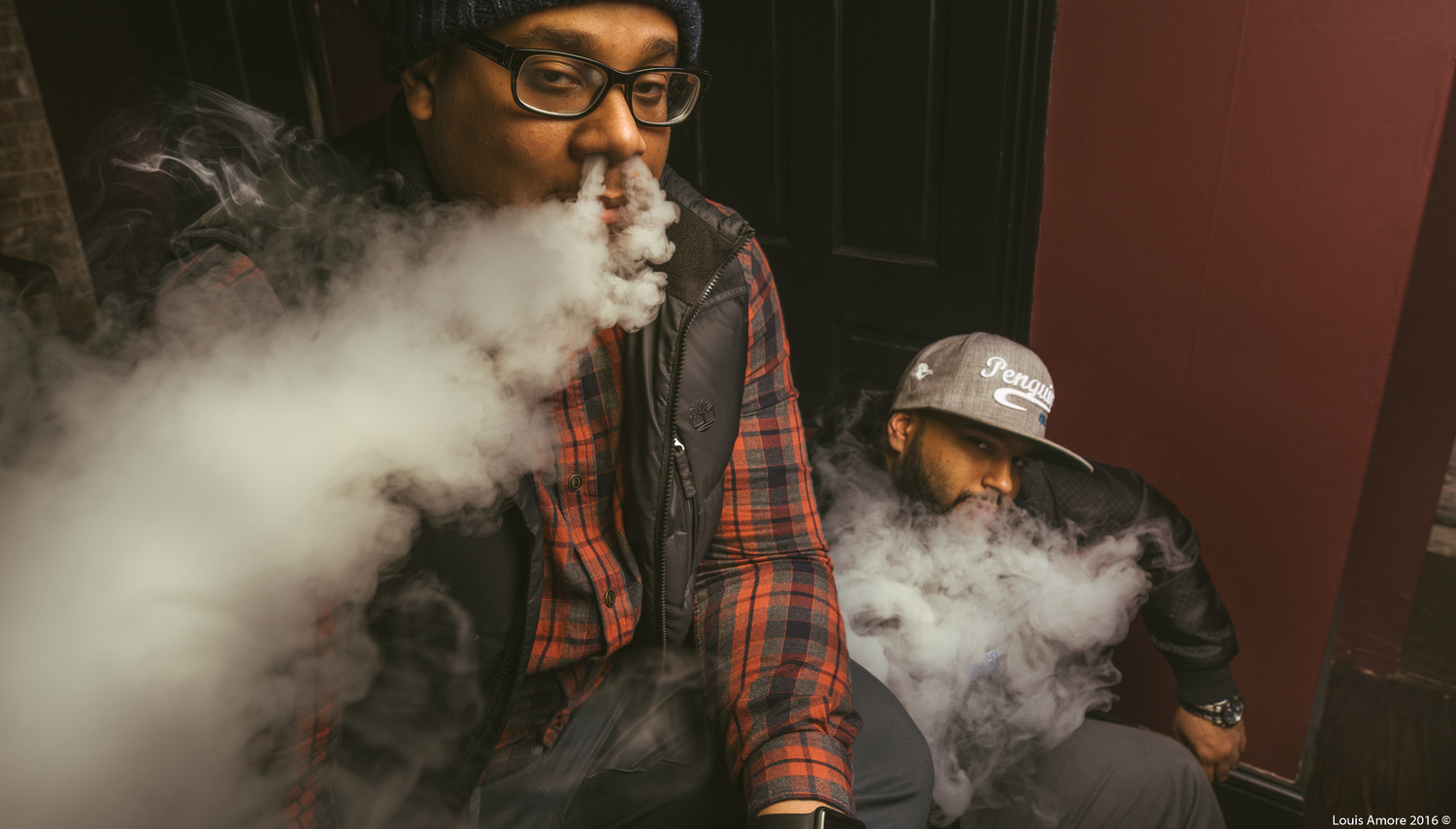 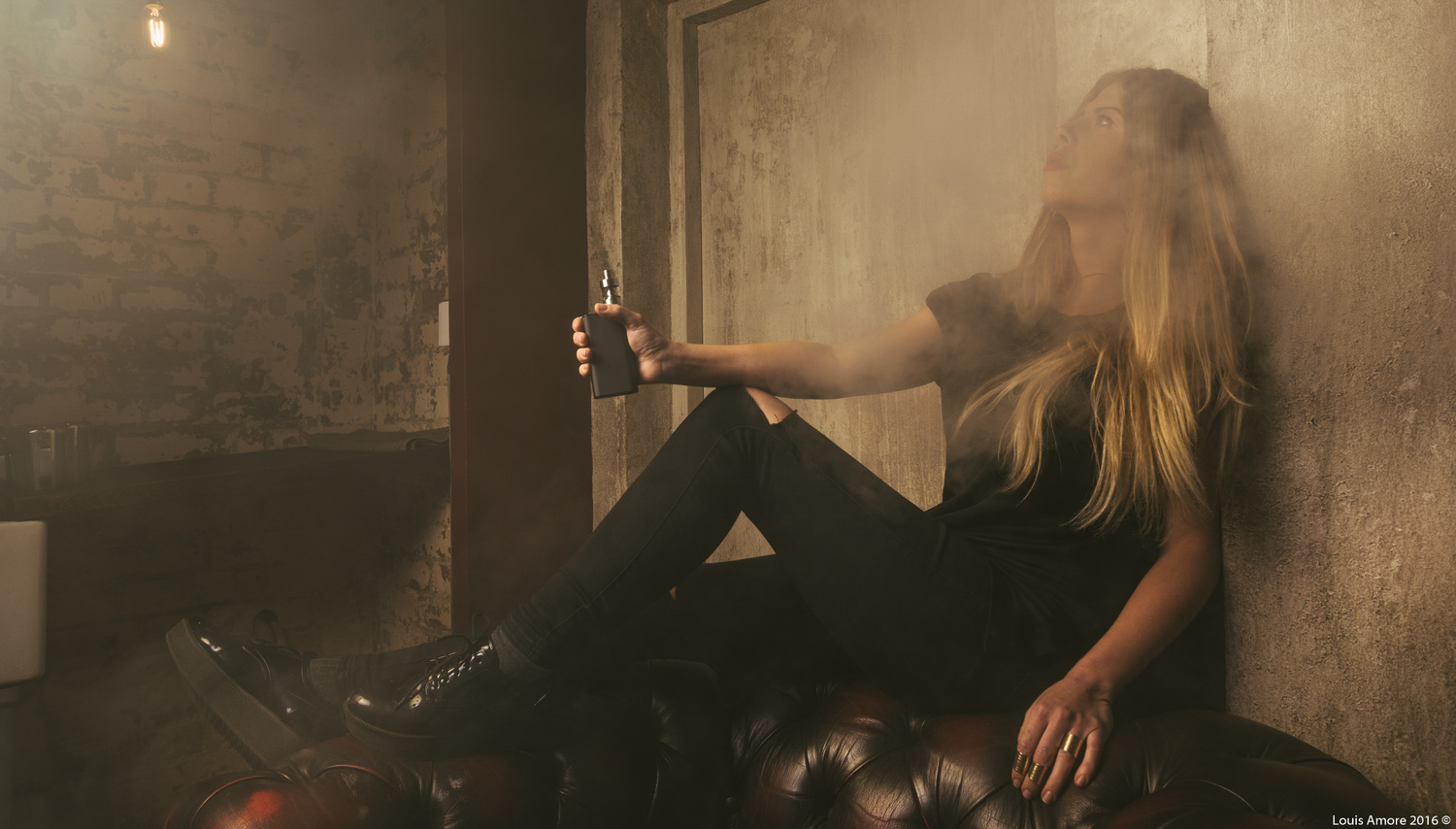 “It felt like I shouldn’t be in here, this is for cool kids. Everyone was smoking vapes. I loved the shop and surroundings; the vibe was really pleasant. I loved the fact that I knew nothing about the ‘craze’. It’s so new and refreshing to see young people getting together and socializing over something other than alcohol,” Amore said. He realized then that this could be a fantastic subject for a portrait series. 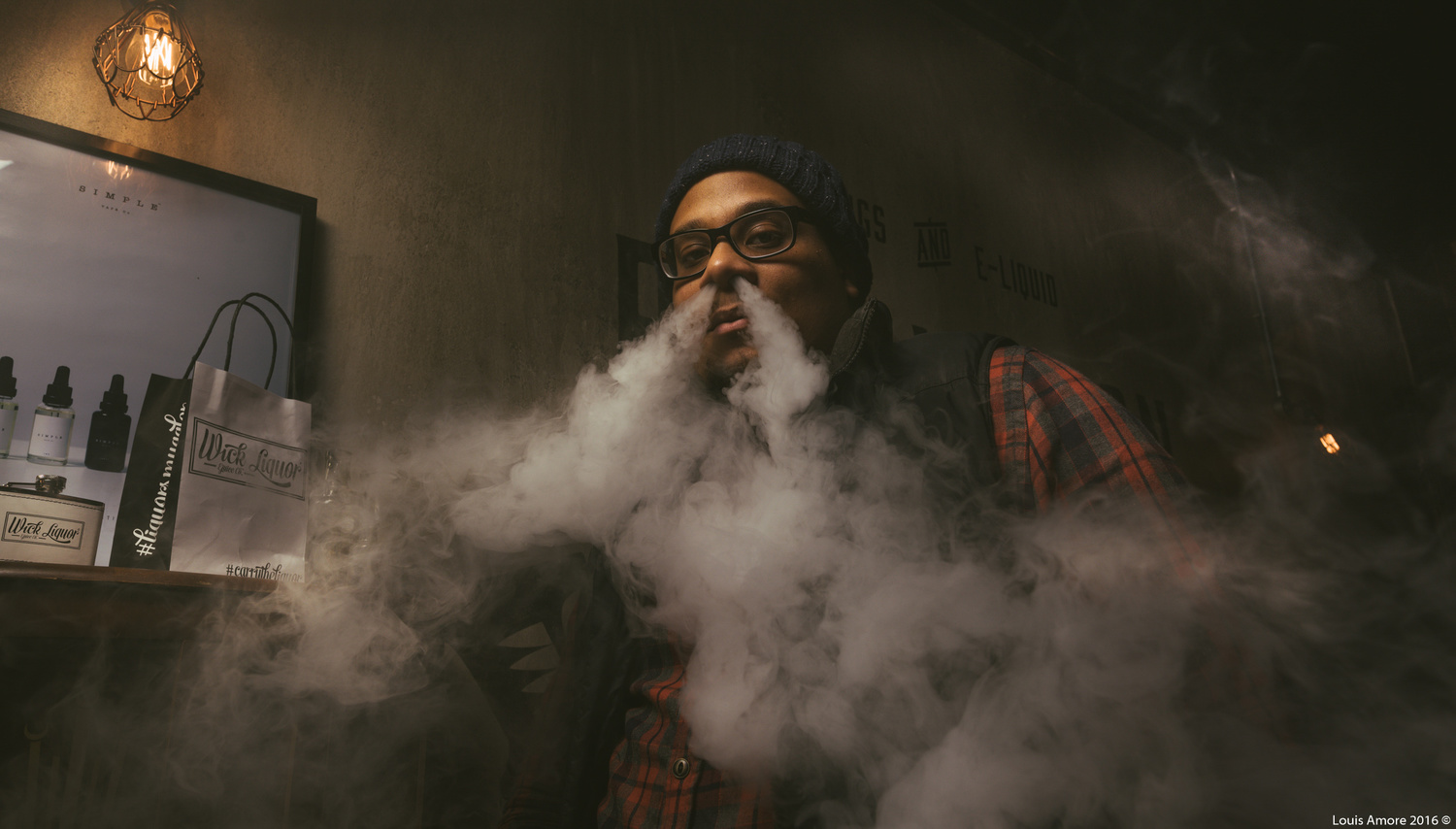 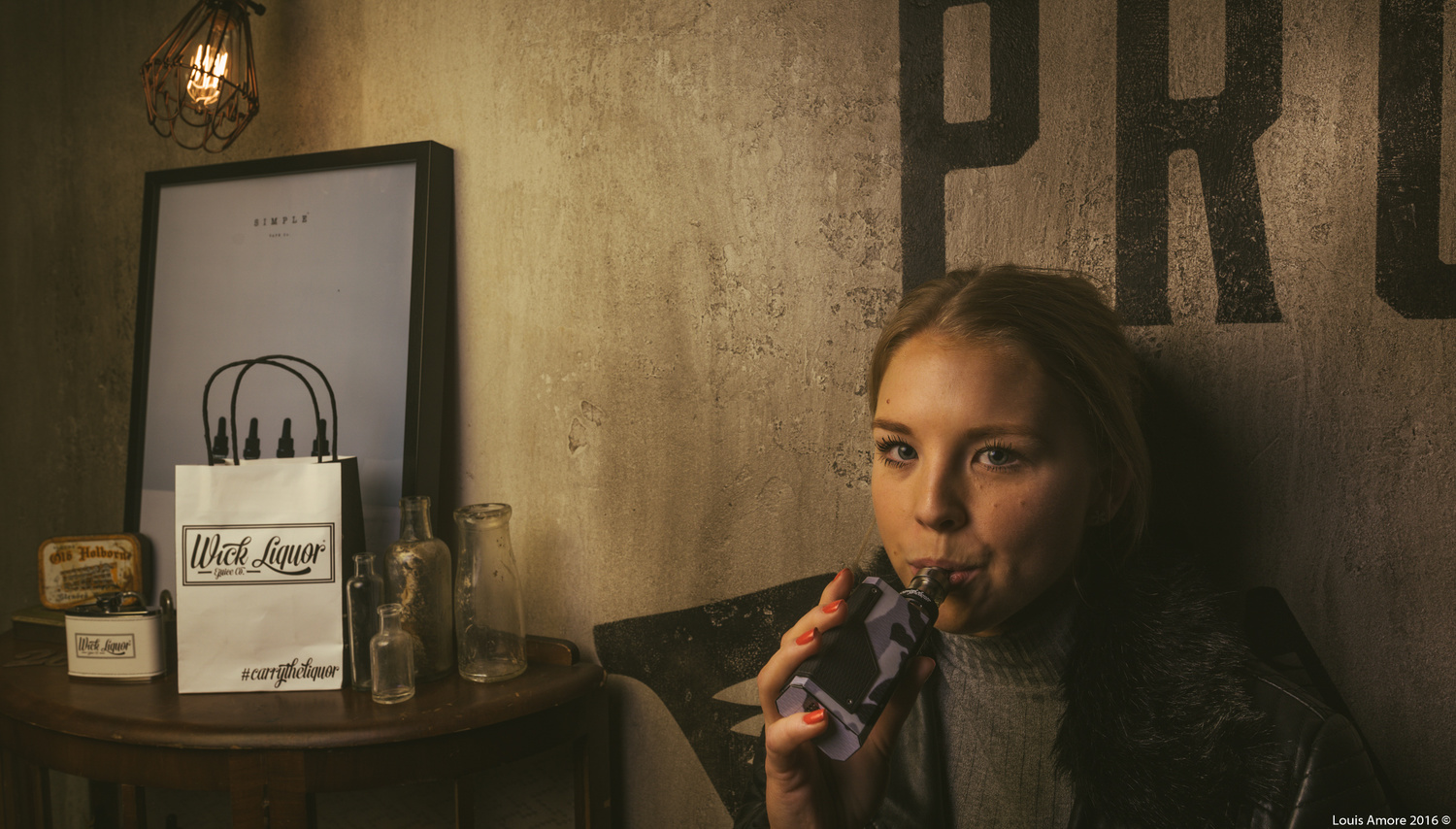 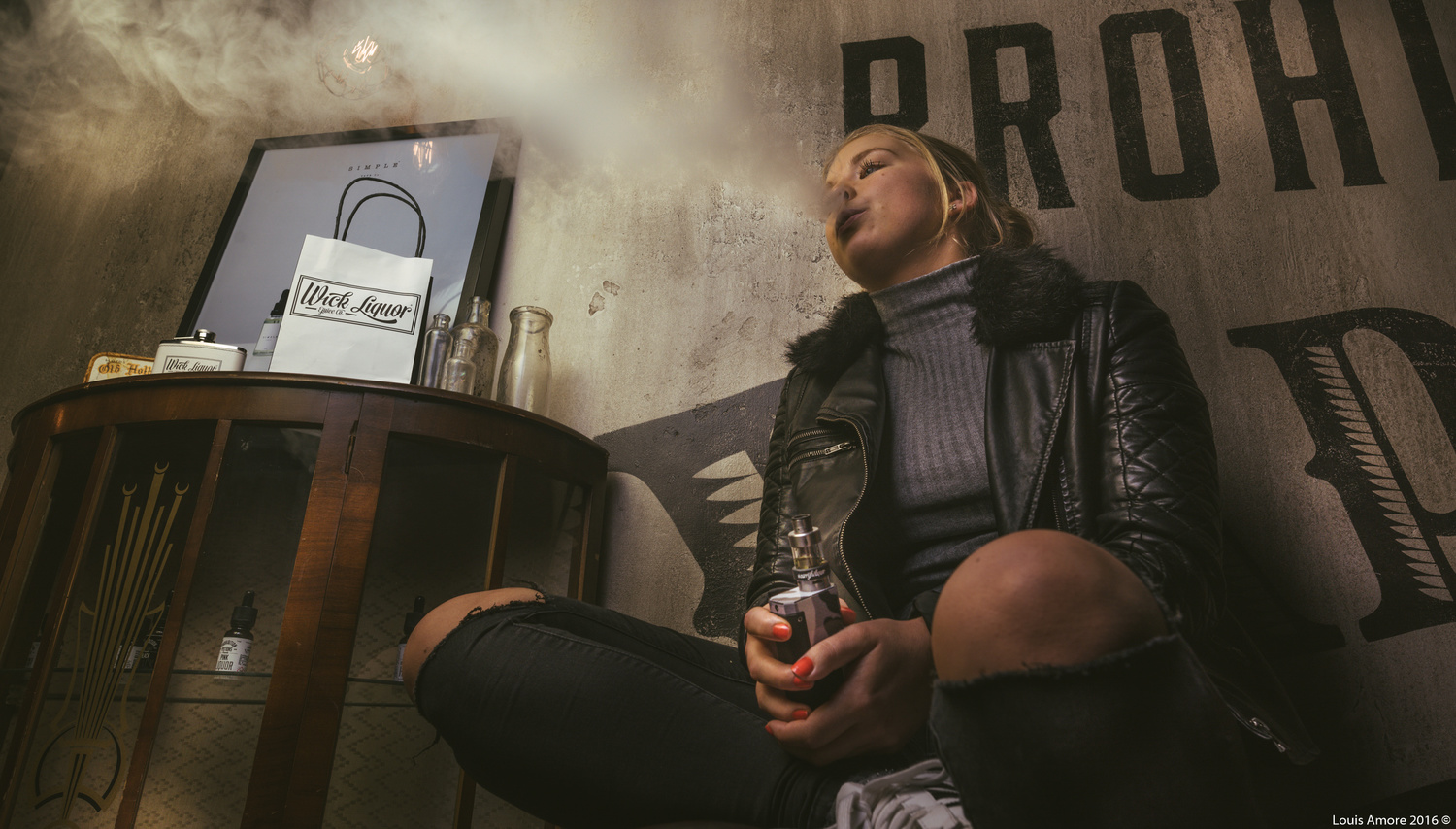 Amore said that the process of photographing the event and creating the portraits was very enjoyable. The compositions, he told me, were difficult to create as predicting what the competitor was going to do with the smoke was near impossible. “I didn’t know whether it would cover the whole frame or what direction it was going to go,” said Amore. “The people were really lovely, however.”

While creating the series, Amore was pleased to learn that the vapor doesn’t always contain tobacco. The owner told him that a lot of customers come in wishing to give up smoking. Personally, I don’t understand the culture much, but it’s great to see people looking out for themselves and having fun with it. 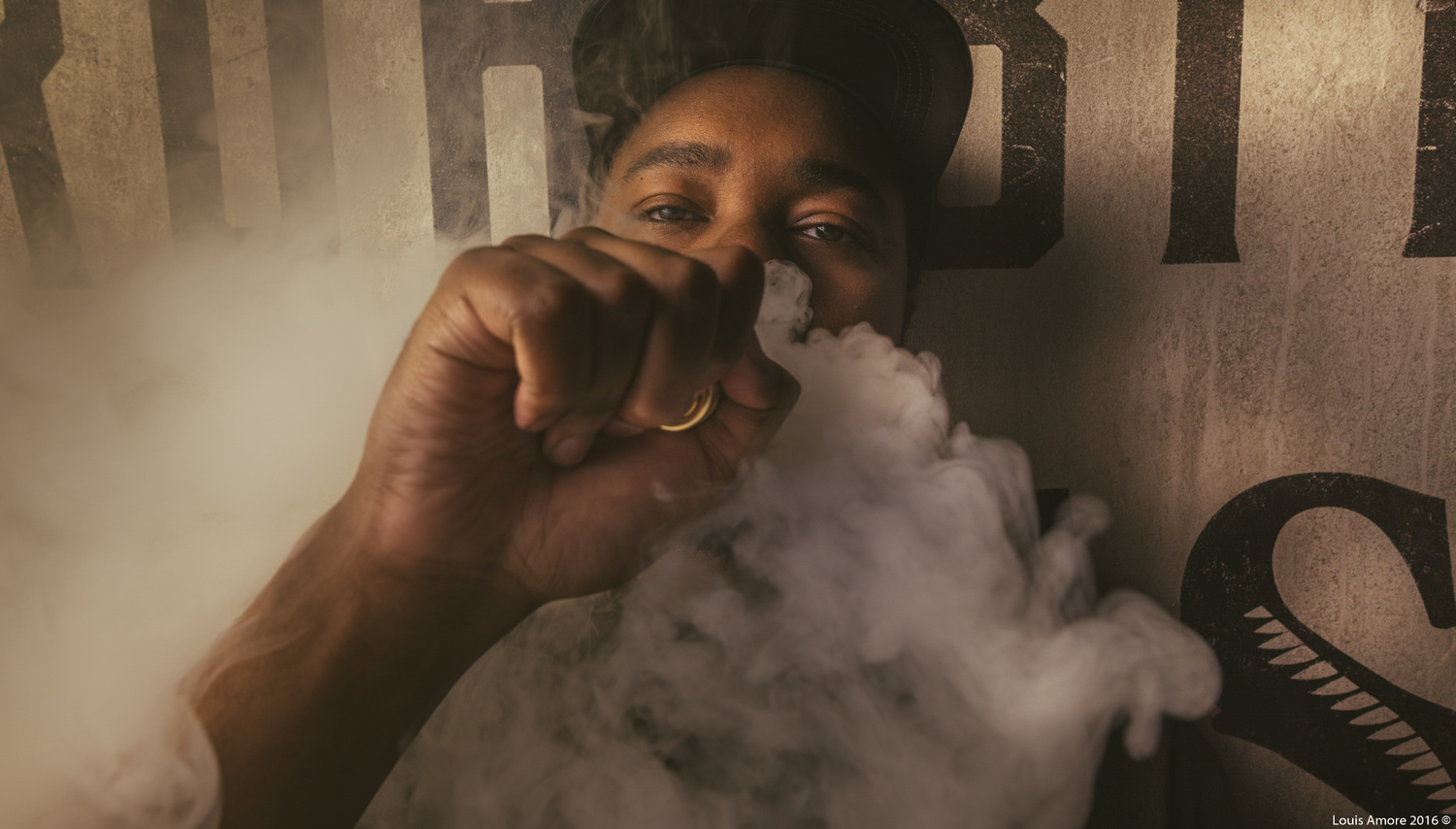 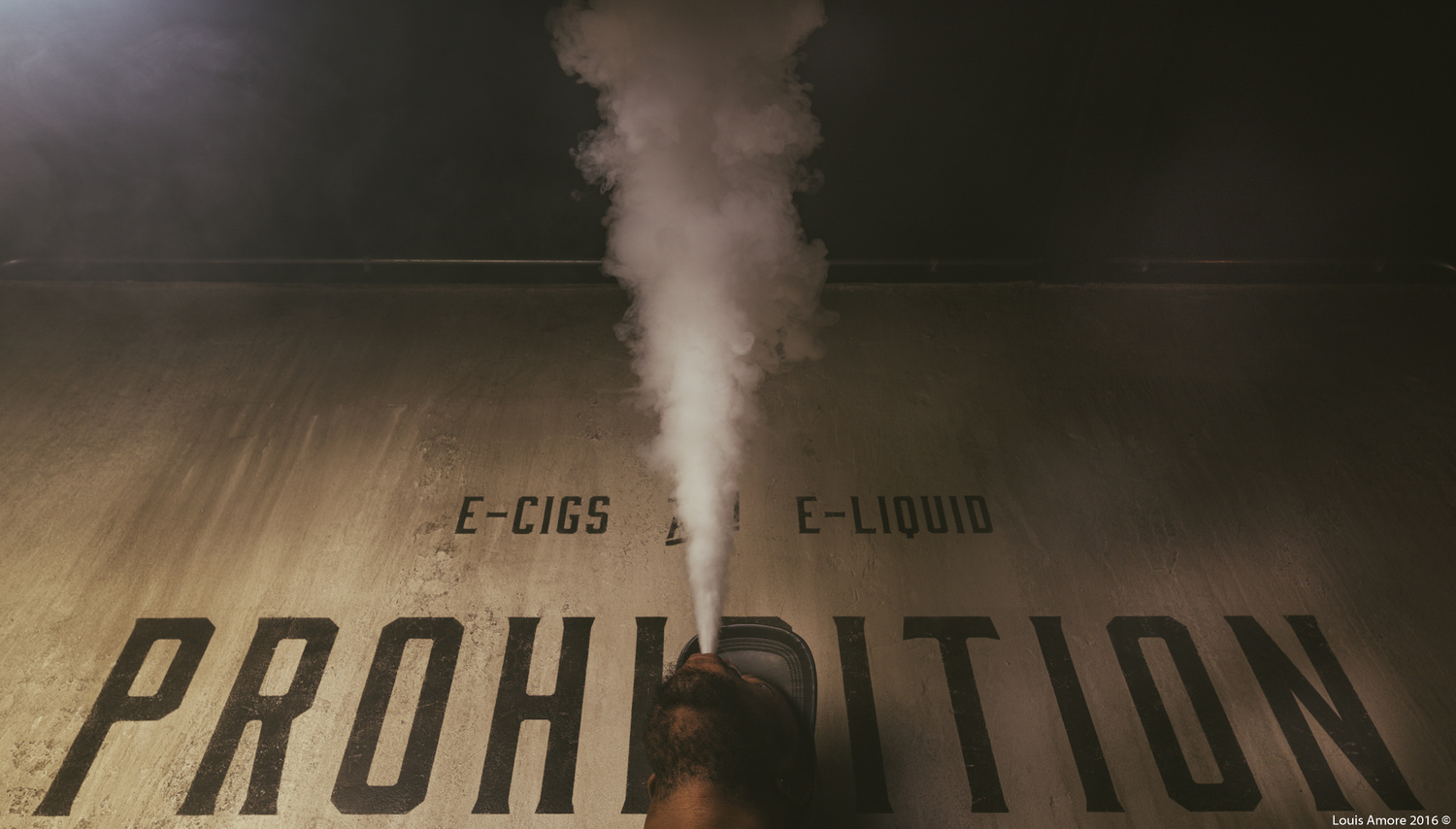 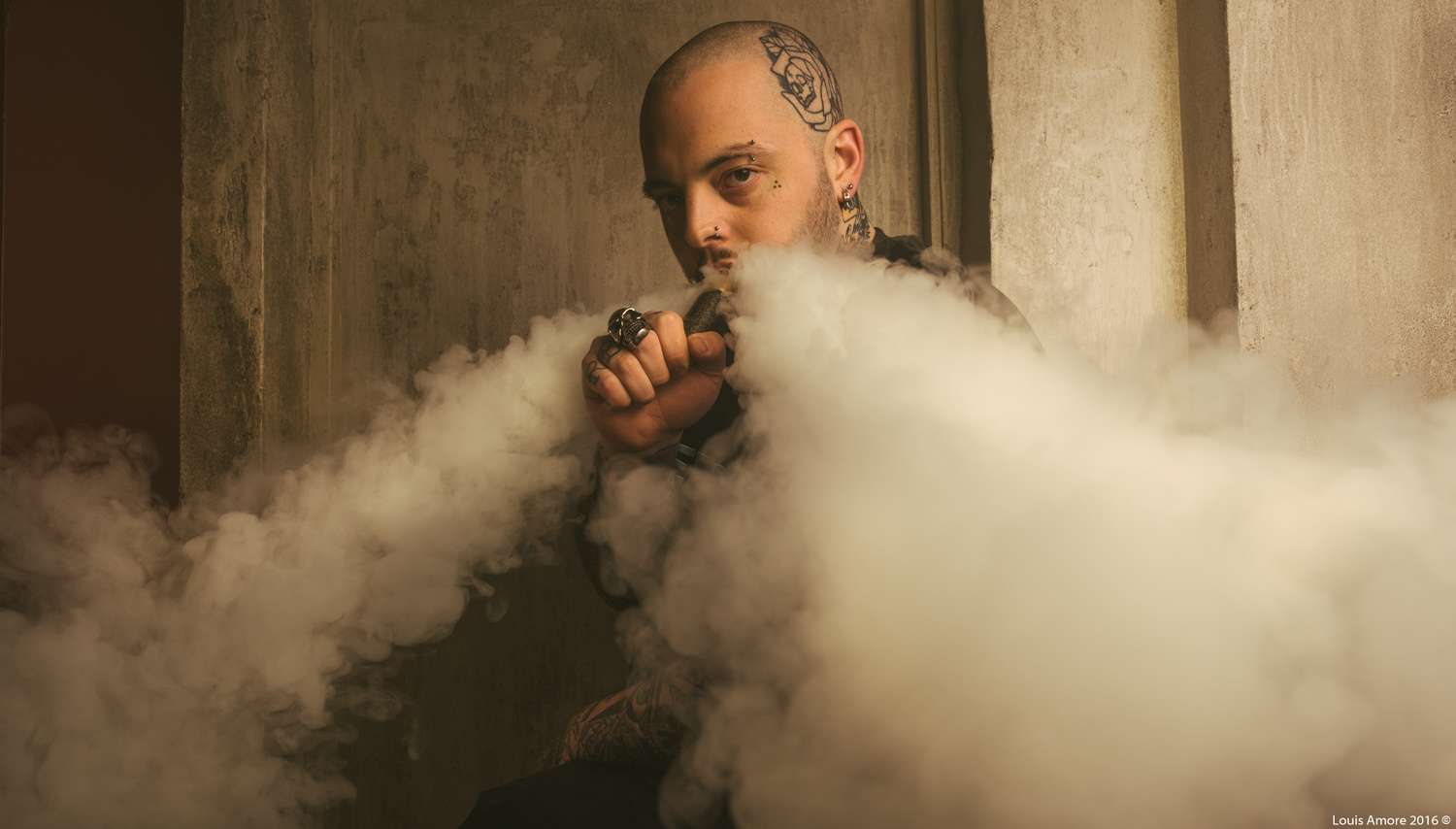 To create these images, Amore used a Nikon D810 wearing a Sigma 24mm Art Series lens. The lighting consisted of an Elinchrom ELB400 One Action Head To Go kit with an Elinchrom 100mm Rotalux softbox. He mentioned that this setup allowed for maximum portability and quick set-up times, something I imagine is a must in a crowded vape shop.

Louis Amore is a photographer in North London. More of his work can be found on his website.

Nice shots... That said, vaping is the wackest shit ever.

"wackest"
I see you are the authority on current trends.

I don't think it's the "wackest shit" but it would be nice if more vapers treated them like cigarettes. It may not be carcinogenic (as far as I know) or as unpleasant, but when I'm in class trying to listen to the lecture I'd rather not smell synthetic strawberries and see a cloud of vapor rise in front of me when the prof's back is turned.

Popcorn lungs! I so I've read.

Smells better than cigarettes, that's for sure.

That was the biggest worry although it's very exaggerated.
Ask any ex-smoker how they feel physically after switching to vape and you will have your first hand, unbiased health report. And yes, it smells a million times better than cigs. I've been vaping for 4 years and I've never been in better shape.

I'm a former smoker. I quit, then I picked up vaping for a little bit, but then quit.

I mean ideally, we shouldn't have anything in our lungs. But hey, it's tasty.

Any cocaine addict feel 10 times better when switch to cigarettes too.

That said, it's a GREAT solution for the first few weeks, but eventually, smokers need to kick the physical habit, not just the chemical one.

Excellent photos and amazing shop.
Thanks for covering this guys.

Hey lovely words thanks so much, Im glad you liked the series :)

Easiest way to spot a d-bag.

An easier way to spot a d-bag would be to read your comment. :)

"a safer alternative"... allegedly. Jury is still out for now...

a bunch of slackers

"mostly as a safer alternative to cigarettes"
Have you read ANY of the research on this topic? Vaping is just as bad for you as standard cigarettes - it just smells better.

Have YOU read any research?

No, you tell us why breeding bisphenol-a and xeno-estrogens need research to be backed up.

Actually, wrote about it in my thesis for my Masters on reofrming of the portuguese public health system. ;)

Nice images. How it is a documentary though?

Great photos, I like how he used lighning for this shoot...but misleading tittle...it looks like lifestyle commercial shoot and it's acually a reportage....not documentary....

Product photography in the vaping industry is booming..
IG @vapephotographer

That must be very rewarding, to win a vaping competition.

The photo with the guy that has a tattoo on his head is the best shot.

I want to know if it is positive or negative? Personally, I vape and I don't want to read fairy tales about its harm. I have bought my main device on https://www.mtbakervapor.com/devices/vape-starter-kits/ and I don't regret it because this work for a ling time!