Four Steps to Make a Film Reel That Isn't Boring

For filmmakers, our reels are often the first thing a prospective client sees from us, so why do we put so little of ourselves into the edit? Your reel should show the world who you are, just as much as it shows the world the kind of work you do.

I love watching reels. It’s one of my favorite things to just passively search on Vimeo. Why? Because by design they’re taking a huge amount of unrelated work and shoving it all together to create a hopefully interesting montage. That's way harder than people think. But a lot of editors fall into the trap of creating a montage that just demonstrates their ability to create “good” images. The problem? Differentiating yourself by showing quality images is only part of why someone would want to hire you. The real problem? There’s always going to be someone with the ability to capture interesting footage. That’s just the reality. Since that’s the case, it’s incredibly important to put our focus directly on the ways that we can be different. But what can you really do in a reel that shows that?

Use Interviews to Create Dialogue

Honestly, this is the most important and essential thing that you can do in any reel. Reels are almost expected to be story-less montages of good footage. Break that expectation. If you’ve been working for long enough, you’ll undoubtedly have at least a couple interviews that may contain some bites. Get creative. Don’t allow yourself to fall into the trap of just utilizing visuals in your reel.

Why even bother with this? Visual storytelling is a massive part of any job that you’ll do, but recognizing story elements is perhaps even more important. When you’re being hired as a cinematographer, you’re not just being hired to create good images, you’re being hired to collaborate with other creatives and capture powerful content. That’s a much broader goal than you might initially put on yourself, but it’s important to take up that burden. If only for the simple reason that beautiful images are shallow without story. Convey that idea to prospective employers and they’ll see it, and hopefully, respect it.

If you were making a short film or any type of informational video, you’d be expected to craft a beginning, a middle, and an end? Why make your reel any different?

Bad editors often associate pace with the time between cuts. While this does play into how a piece is perceived by the audience, I like to think of pace as more closely associated with breath and ebb and flow in energy than just cold, calculated rhythm. Even though most reels get by with a rhythm that echoes the beat of the song they’re editing to, you should find ways of breaking through that. Just like the beginning of your film should set expectations and put the audience in the mindset that you want, your reel should absolutely do the same thing.

At the end of your reel, the smart thing to do is obviously use a shot that leads the audience out on a rhythmic level, but again, let’s throw out the idea that this is the only thing you should do here. The beginning and end can be great moments to really focus on using your work to speak to who you are.

Your reel is one of the only times in your career that you’ll be given the freedom to choose music freely; take that ethic elsewhere. Now the huge caveat here is that you should never work to steal other people’s creative work. However, using things like maps to show where you live and work is a powerful visual. In fact, in the past, I used zooms from Google Earth for a quick little three-second sequence showing where I’m from.

Taking that to a whole new level, on my most recent reel I used journalistic footage from 2016 campaign rallies and an interview with the famous photographer Gordon Parks. Now, clearly I’m crediting their work in the description of my reel, and I use effects within my reel to signal that this isn’t my creative work. I’m not saying that you need to use methods like either of these, but the ethical use of outside resources to frame your work can be a fun way of making your reel more like a film than a montage.

There’s a real tendency in all of us to dance around really being ourselves in our work. Whether it’s a fear that you’re not going to be taken seriously, or ruffling feathers in prospective clients, putting yourself out there and using a lot of personal style and touch isn’t always the easiest decision. In the end, you’re marketing yourself to clients, not just making a film for just anybody. Adding to the stress is the fact that this is your livelihood on the line. But let me go back to what I said at the beginning.

There’s always going to be someone as good, or better than you — being you is the only way that you can really make sure that you won’t be forgettable.

For instance, I know myself and I know that there are a million people that do great work, equal to or better than me. So how do I differentiate? How do I make sure that I’m not just another name in a pile? I play an entirely different game. I’ve found that my strength is story, and so first and foremost in my reels, I place story. Get to know yourself. Find how you’re different, and own it.

Eventually, you’ll get to the point to where your name will speak for itself, and people will hire you without even watching your reel. However, in my mind, creating a reel with interesting elements, editing, and story is part of growing as a freelancer and filmmaker. It’s a practice that we should take up more often.

Reels are just groups of unrelated materials that were shot or created over a certain period of time and their goal is almost always the same: to show off what you can do. But I’d challenge you to instead make a reel that shows who you are. 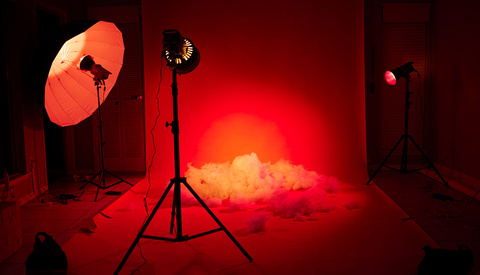 Education / October 22, 2021
Why You Might Want to Switch from Strobes to LED for Studio Work

Overall great post. I also share the spirit of "different" reels. Though I don't share your point of view on using footage that wasn't shot by you for YOUR reel.

I watched it, and for each image, I couldn't be sure if it was yours or not. I *suppose* everything is yours except the black and white, but I can only guess. As for the names burned into the image, I cannot tell if its part of the original production, or if it's a reference, or a credit, or anything else ... it only brings confusion to me. If I were looking for a DP to hire, my conclusion after watching your reel would be: ok he can think a little out of the box but what images am I really gonna get ? I don't know. So I'll pass.

Also, if you have enough material, I would advise to create different reels for the different purposes that interest you: commercial, documentaries, fiction, corporate, ... You can have all of them clearly labeled as such on your website. This does 2 things: gives only images that your potential client actually cares about (I don't give a shit about weddings if I am looking for a corporate shoot), and because that means less footage that's probably a reel under 2 minutes that your potential client can therefore watch entirely. 5 minutes is too long when you are watching many reels to find a good one.

I totally agree about making different reels, especially if you're a collective or production company. For instance, this reel is my personal reel, yet I have another company that's a collective of three people. For that company we have multiple reels showing our food work, lifestyle and action sports. I agree that method can be incredibly effective.

I understand the sentiment about using outside resources. I believe it comes down in MANY ways to how you showcase your work. I worked very hard to use outside resources as purely contextual references points for, "2017."

The names on screen are the names of the people talking! It was just my way of dodging the boring lower third. Also, I dislike the way lower thirds pull the eye away from the speaker. It's just a personal thing-- you might not dig it!

And finally about the length. You're certainly not wrong. I once worked a job where I hired personnel based on their reels. I watched a lot and it could get tedious. It's important to know your audience. I use my reel mostly in meetings with people as well as communicating with agencies who would be hiring me personally as a director (I'm not the greatest cinematographer, by any means). In this context, it's often well received, but again you're not wrong. Length could be a totally valid critique.

Thanks for taking the time to read, watch and comment!

Thanks for sharing. Your reel story was fantastic and well presented. Well done.

As envy is not one of those qualities that people should have or strive for. When I see people that have the talent to create moving images into stories.... I feel that emotion and want.

I've reached the conclusion after being here a few years, the people that have this ability and talent to really create emotion and feeling inside others exceptionally well, byway of movie making are some of the most blessed people that walk among us.