This Is How You Check a Pre-Owned Camera, Before You Buy It

Pre-owned gear can be a great way to save money and enjoy a brand new photography experience. Yet, a good deal also includes proper quality. Here you get to know how to check a second-hand camera body.

In my last week’s article, I described where and how to buy second-hand photography gear. I proposed that you should always take a look at your camera in person, whenever you are going to buy from a private seller. In this article, I focus on different ways to make sure you won’t be disappointed by your second-hand camera body.

Camera bodies are quite easy to examine. Most of the information you need is easily accessible. There is hardly any possible fault which you can’t check before you buy your camera.

Panasonic and Olympus open their secrets after a complicated sequence of touches of different buttons. Nikon and Pentax save the shutter count in the EXIF of any picture. Older Canon bodies will show you the release count even on the screen, if you use the Magic Lantern add-on. If not, you need to use software.

The easiest way to read the shutter count is websites like camerashuttercount.com. You can upload a photograph and the software will interpret its EXIF data for you. For Sony cameras, you better use another tool.

Before you check a camera on location, you can ask the seller to send you a current photograph. A picture including today’s newspaper would be great. This way, you can be sure that the current shutter count is burned into the photograph's EXIF. Only be aware that the files need to be unedited and uploaded in a certain format to unveil their secrets.

Now, as you got the shutter count, are you really smarter? Are 50,000 releases still okay? What about 100,000? Personally, I don’t give too much attention to the shutter count, but it’s a good point for price negotiations. If a seller wants to sell you a “rarely used” camera, you might prove to him it’s not. If it’s on its third owner, you even get an idea about the usage of the first owner.

On the web, there are different ideas about the maximum shutter count for second-hand camera bodies. Often it’s said that an average camera lasts at least 150,000 releases, while professional models are fine with up to 300,000. I personally don’t know where the information comes from, but I always compare it with buying a used car. 300,000 miles is quite a lot, but as long as the engine works and the chassis is fine – who cares?

Machines can break from one day to the next and as long as you can’t see any flaws and vulnerabilities in advance, there is no need to worry about a few thousand shutters more. If you only want to use a camera occasionally and don’t shoot time-lapses day after day, you probably won’t go far beyond 10,000 photographs per year. So, does it really matter if the cameras shutter count is at 40,000 or at 80,000?

Used Cameras Should Show No Sign of Usage on the Sensor

Far more important is the condition of the sensor. The place where all your light is collected and translated into digital files should almost look as it did on day one. Any damage here, and it’s time to say goodbye and leave. While a dirty sensor can be cleaned professionally or with some caution at home, a scratched sensor won’t be easily repairable.

But how to distinguish dirt from damage? You need to take a quick test shot. Mount a lens to the camera, put it on a small aperture like f/16, and point it at a bright and evenly lit subject like a piece of paper or a white wall. Take a picture and review it. Often, you will find small, dark spots. That’s not an issue in most cases. Probably it’s dust which you can get removed. Longer, curvy lines can also be hair and a bigger spot might be oil.

If you’re unsure, remove the lens and check the sensor of the camera. Usually, you can even see dust, hair, or oil at the place where you see the spots in the image. Only remind the inverted axis of your sensor. What appears in the lower left of a photograph is the upper right of the sensor.

The only thing you don’t want to find is a series of parallel lines. They might be proof of sensor scratches. Scratches usually occur when the previous owner tried to clean the sensor and failed. Spots caused by oil need some caution as well: While little spots can occur every now and then, they can also be a sign of flaws in the shutter mechanism.

At a certain point in a camera’s life, its value might rise with its age. For the DSLR market, this time has yet to come. On the other hand, age doesn’t really harm a camera. A Nikon D800 from 2012 won’t perform worse than a D800 from 2014.

Age is mostly interesting when the camera is still in the period of the manufacturer's warranty. However, a warranty period of only two more months shouldn't get too much attention. It isn’t worth a lot of extra money. Two months with a new camera are quickly over, trust me.

I find the number of owners more important than the age of a camera. If the camera had more than one owner within a short time, you should be careful. Maybe there is a good reason why people want to quickly get rid of it. Always ask for a reason, here. Maybe it's the last chance to figure out that the camera body of your dreams is more like a nightmare.

Most cameras suffer from the hands of time. Only if the cameras spent a lot of time on the shelf, it might look brand new. Cameras that are frequently used show common signs of usage: Rubbers come off, scratches appear, and dirt or dust fills the little corners. The viewfinder of my own Nikon D750 looks horrible and there is still some color on my rubber grip from the Holi color festival in India.

The only question in terms of signs of usage is: Does it affect your photography? If the rubber comes off, you might be able to glue it. A scratch on the body won’t appear in your photographs as well, and other marks like the color might tell a nice story.

I personally like cameras with their own history and character; it saves me money. Optical flaws are a good reason to lower the price of a camera body. Only be careful if the camera looks like it has been dropped. Physical shocks can also affect the mechanics inside the camera.

The mechanics of the camera need special attention. Hit every button thrice, check if the software reacts and pay attention to the look and feel. Each and every button should snap and not feel buttery. The dials need to run well without dragging. You don’t want to miss a shot, because the shutter button got stuck or the dial for the shutter speed couldn't be properly adjusted.

A friend of mine has spilled some sweet juice over his camera a few years back. It still works, but it feels too stiff and gluey. If it was mine, I’d never take it out, because the feeling makes me uneasy. I like to feel the adjustments of my camera before I see them on the display.

You should also put an SD card into every slot, remove it and check the battery compartment. Everything that’s moveable should be moved.

Test the Camera in the Field and Ask Questions

One of the best ways to check a camera is actually testing it in the field. How else would you know if the camera even takes pictures? Check the shutter in burst mode, take a look at the pictures, test the focus engine and the display.

When the owner accompanies you, you can ask a bunch of questions and also get a good idea about the person. Is he a passionate photographer who upgraded to another system? Is he a professional who really loved his camera or does he even know about its functions?

Getting to know the other person isn’t too important if you’re already sure about the quality of the camera. Still, it helps you with your negotiations when it comes to the final price of the body. Does the owner know about its value? Does he underrate it or overrate it? Have you seen flaws, that he didn’t tell you about? If so, how much will he reduce the price?

Sometimes, you can save 50 bucks by only talking for a few minutes. 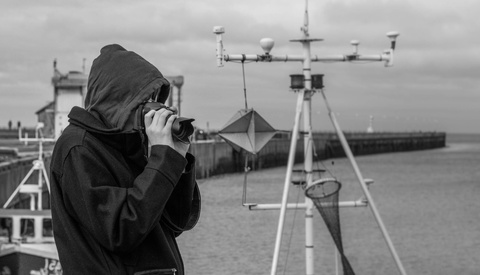 Gear / December 12, 2021
Buying an Entry-Level Camera as a Present for a Child? Please Consider Getting Something Better Instead

Gear / June 13, 2021
The A Mount: Sony's Future That Never Was
Log in or register to post comments
6 Comments

Check the exhaust. If it's all black - the sensor likely has a problem.

If the camera has wifi or bluetooth, check that they actually work.

I recently bought a second-hand camera from a camera-store and on coming home, it turned out the wifi didn't work properly and crashed the camera.

Since I bought it in a store, I could return it, and they had another second-hand body of the same model that did work properly.

Shutter count is overrated. The number of shutters out there wearing out is miniscule. Overall condition is far more important.

All of your comments are probably very helpful when looking for a digital camera - can you do a similar column about film cameras?

Hey Anthony, thanks for your comment, but I don't think that film is looked down upon. While digital photography is definitely a focus here, we also have content about film. One of our authors, James Madison, almost exclusively writes about film photography. As his articles are written with passion, they are quite compelling to me, even though I rarely take my Nikon F30 out for a session.

My local dealer allowed me to use the equipment for 3 months and return it without giving any reason for a full refund. Since this was probably too generous, you now get a 1 month warranty, which is still very good. Good customers can still return the item if it turns out that it does not fit into the existing equipment or workflow. - This is very convenient and you can take the time to carefully check the used equipment. In my experience, mistakes are sometimes not obvious at the beginning, but are only discovered during longer use.