For many years now, I've had L-Brackets on my cameras. There are many benefits to them and only a couple of drawbacks (a little added weight and size). When I decided upon purchasing the Canon EOS R5, I immediately started my search for an L-Bracket.

As a landscape and wildlife photographer, much of my work is from a tripod, and I'm often switching between portrait and landscape orientation. An L-Bracket makes this easier when using a gimbal head and makes it possible to take proper panoramas. I've always hated tripod ball heads and their flippy-floppy nature and use a gimbal head on my primary tripod. The use of the gimbal head typically requires an Arca-Swiss style tripod plate, so an L-Bracket fits the need perfectly.

Having had three previous L-Brackets, I knew there were probably going to be several options to choose from. I knew the R5's flip screen would factor into the decision more than previous cameras, such as my Canon 5D Mark III and IV. I checked with Kirk Enterprise Solutions because I had one of their L-Brackets for my Canon 5D Mark IV, but they only had the one-piece design, and I really wanted to try a two-piece design this time.

Next, I searched B & H and found several L-Brackets, but none were exactly what I was looking for and in stock. A quick search on Amazon found only two, one of which was for the battery grip. So I checked out the SUNWAYFOTO PCL-R5 L-Bracket and found that I liked the design and features. For only $49.95, I was willing to give it a try. I ordered one even though it said it may not ship until mid-February.

Having not seen an Amazon shipping notification, I was surprised when the SUNWAYFOTO PCL-R5 arrived unannounced. I quickly removed the bracket from its protective carry pouch, and I must say, I was impressed. The quality of the material and workmanship is right on par with the other L-Brackets I've had that cost nearly three times as much. I can honestly say that I can't see anything that could be done better with this bracket's design or manufacturing.

The PCL-R5 L-Bracket has a few features not found in many L-Brackets, such as bubble levels, removable vertical portion, and safety stop screws. There are six UNC 1/4-20 accessory mounting holes, five on the side, one on the bottom. Two faces upwards, three faces left, and one in the bottom. I've not had accessory mounting holes before, so I'm looking forward to these.

The vertical portion is removable using the UNC 1/4-20 single screw, so the L-Bracket can be used just as a standard Arca-Swiss plate would be. It also is slotted to slide out about 0.8" (20mm) to make cable installation more manageable. The screw for the vertical portion and the camera mounting screw is hex keyed and slotted so that they can be tightened or loosened with a coin, hex wrench, or straight slot screwdriver.

Loosening the side bracket screw enables the bracket to slide out about 0.8" (20mm)

The side bracket is removable if needed

The vertical portion also has a gap that allows the screen to be viewed from above or below. You will need to be careful when the screen is in this position, but it sure beats nothing. There's no way to make this any better considering the limitations of the Arca-Swiss dimensions.

I've missed this feature with my Canon 5D mark IV!

In addition to sensor centering marks, the PCL-R5 L-Bracket has three bubble levels. I'm not sure how much I'll actually use the bubble levels, but they're tucked out of the way. The built-in slot for a camera wrist strap was one of my main requirements for an L-Bracket, as I exclusively use a wrist strap. Even when using the wrist strap, the camera battery door can fully open.

A wrist strap mounting point was one of my required features

The PCL-R5 L-Bracket also has two magnets built into the bottom to hold a coin for loosening and to tighten the screws. However, US coins aren't magnetic, so I'll have to find a 1" stainless steel washer to place there. This was probably my only disappointment, as my SmallRig cage for my other camera came with a little tool that also attached magnetically, and I've found it to be quite useful.

Two stop pins mate with the accessory holes in the bottom of the R5/R6 to prevent the L-Bracket rotation. The large silicone pad on the plate ensures a snug fit. The bracket is rock-solid when attached.

What's in the box

Everything that comes in the box

Overall, I'm entirely pleased with the SUNWAYFOTO PCL-R5 L-Bracket. It does everything I need it to, looks nice, and feels like it will last as long as I own it. If you're thinking about getting an L-Bracket for your Canon R5/R6, I would recommend checking this one out. Not only can an L-Bracket make it easier to take portrait-oriented photos, but it can also keep the weight centered over your tripod and reduce the risk of your tripod and camera tumbling over. 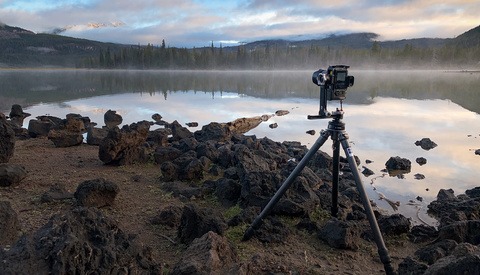 I own the Sony version of this bracket and use it with their geared tripod head. I'm very impressed with Sunway products so far and think they are a good value for money.

I bought the rigid (vertical section not removable) version of this L-bracket since I didn't need the adjustability and thought I'd gain a bit of stability. I agree with the author's overall positive assessment. A couple of added niggles:
- I'd prefer if the bottom plate didn't have the rubberized pad. I think a well-fitting metal plate flush against the camera bottom is a better solution.
- I'd prefer a raised metal lip against the front of the camera. I know there are pins that fit into recesses on the camera bottom to prevent rotation but a lip would give me more confidence.
- The vertical section of the L-bracket flexes because of the cut-out for the flip-out screen. I think this flex disappears though, when the L-bracket is braced in the ballhead clamp in vertical position.
- I find the tiny bubble levels useless and I wish they weren't there.
Another inexpensive L-bracket is offered by Leofoto, which seems to address most of my complaints, although I have not seen it in real life. It became available after I had already purchased the Sunwayfoto version.

Nice review - and great product photos - thanks! Just a small note: stainless steels have poor magnetic qualities but, believe it or not, Canadian quarters should work fine with the magnets to be the stud remover.

Thanks for the tip!

Thanks for the tip. I found a few Canadian quarters and nickles in my coin stash, and they work great. I mean, it's not like they're worth anything anyway right? LOL

Nice review Mike. Just wondering which wrist strap you favour these days? Thanks.

I use the ProMaster Neoprene Wrist Strap for DSLR Cameras (9412), although I may to try out the one from ZugGear next. They're both about $10.

I switched the screws to D-rings for the 1/4-20 to fit onto the camera, on my cheap L bracket. .A Canadian 5 cents (magnetic) may also work better as a screwdriver for the screw holding the vertical bracket in place, as the space may not allow a larger coin. Fumbling with coins in Winter is actually a bit of a no go in my case. 5 minutes without gloves is not an option.

The D-ring would work for the camera screw, but the side bracket doesn't have enough space for one of those. It's not a big deal since I don't expect to remove it very often.

I had a time finding an L bracket for my R5 and settled on the ProMedia gear as the upright is offset to the front of the camera. This allows me to get nearly full articulation of the screen (more than the Sunway or Kirk) and allows relief for cables.
Sunway makes a great geared tripod head that I acquired for architectural photography and it is a delight.