If you're one of the many photographers out there with one of the most popular digital cameras on the entire market, the Nikon D750, you're going to want to grab it and check the serial number to make sure it's not one of the affected units in this new service advisory. Read on to learn if yours is affected and how to send yours in to Nikon for free.

The Nikon D750 is arguably the most popular DSLR in the entire world of photography right now, known for its stellar specs, including an out-of-this-world sensor. But, it's had its fair share of hardware issues, and Nikon is now asking users for a third time to check to see if they need to send their camera in for complimentary service after the flare banding issue and shutter issue from just over a year ago. Some people have also had problems with hot shoe alignment. To be clear, this is an extension of the shutter issue, not the flare. While this original shutter advisory was found to only affect cameras manufactured in October and November of 2014, Nikon has since found cameras made between December 2014 and June 2015 may exhibit this same issue.

To see if yours is affected, you'll want to head to Nikon's D750 Service Advisory page, where you'll be asked to enter the serial number on the bottom of the camera. If yours is eligible for repair, the website will collect your contact information, and you'll be able to print off a UPS label so you can send out your body as soon as is convenient.

While your mileage may vary, I sent one of my D750 bodies in for service last year for the flare issue, and it only took eight days from the time I dropped it off at The UPS Store until I had it back in my hands.

It is also worth noting that service advisories are the only time Nikon will service gray market bodies. Gray market equipment does not include a Nikon warranty, but more than that, Nikon will not service them at any price. Service advisories are your only hope of getting Nikon to touch one of them. So, if you've been scouting out one of those cheap $1200-$1500 gray market D750s online, rest assured you can get them taken care of for this issue. Even with that, if you plan on going the gray market route, I suggest buying from a seller who provides their own in-house warranty.

If you can, always go the extra safe route and buy a D750 from a reputable reseller, but even still, your camera may be subject to this service advisory.

For gray market buyers, here is how i reconciled not having the 1 year warranty.

KEH.com offers flat rate repair service for bodies at $250 (iirc). I bought two D750 bodies at $1450 each. If I for some reason need to have the camera service for what would have otherwise been a warranty repair by Nikon, I'm still at a $250 savings on buying a full-price model.

I didn't hesitate to pull the trigger on it.

Or... you could just ignore Lee & Patrick, and buy your photo gear from reputable US distributors (Amazon, B&H, etc.) as opposed to some shady eBay sellers who may potentially leave you with an expensive toy without a warranty or any valid claim to a recall.

That's just me though.

Buying gray market is extremely common, so I both wanted to educate on what that means as well as what the options are for people who go that route. I did specifically mention the safest route is buying from a reputable retailer, and I linked to B&H.

Also, "shady eBay sellers" is a hasty generalization. It's pretty easy to find an honest seller that will back up their product. A lot of reputable sellers also just have an eBay store for selling gray market.

Oh, I was just replying to Justin there :-) I often like to pull Lee & Patrick's chains, even if we're polarized on the topic of gray market purchases.

I'll back you up on that - I have used online grey market importers from Hong Kong who are quicker, more reliable and give better service than some so-called "reputable" bricks-and-mortar stores (I'm not referring to B&H, I mean Australian stores). And, of course, cheaper. :-)

Are you sure KEH.com repairs gray market cameras? I called a few places last year for a Nikon repair and every single one said they weren't able to do the repair as it was gray market.

I called them before I made my purchase and they said they would, but I wouldn't mind further confirmation on this if you want to follow up.

I have a problem...regarding the line "It is also worth noting that service advisories are the only time Nikon will service gray market bodies." According to the Nikon rep I just spoke with, this is not true.

I have 4 D750s. One of my Gray market Nikons shows up as part of the recall and I get the paperwork to send it in. Two of my serial numbers did not show up in the recall service page. I get this error message "Your input data of 58267347 was not recognized. Please try again." So I call Nikon. Yes, I know they are gray market (all 4 are), but I was curious why two of my four gray market D750s serial numbers were not recognized.

I was like "I get you won't do warranty work, but I was under the impression you would resolve recalls"

The rep went on to say "We cant find it in our system. It is gray market. If you sent it in, we wont touch it. It is unaffected as it is only US models"

I responded "How do you know it is unaffected? You can't look it up! So you're saying only US bodies are impacted and nowhere else on the planet has issues"

Rep: "That is correct"

Well, Nikon is dumb as shit and they should train their reps to not contradict themselves. I own 4 gray bodies. Two allow me to search the serial number on the recall page. Of those 2, 1 is affected. So...how id 2 gray market body serial numbers show up and one is impacted but two others won't even show up. We live in the future. We have online databases of all the worlds knowledge. you'd think these knuckle-dragging mouth-breathers could look up ALL serial numbers.

p.s. 1. None of my D750s exhibit any of the symptoms of the recall even though 1 falls into the date range. 2. No need to belabor the point and throw out "you should have bought non-gray market bodies!" I'm happy with the bodies and had no issues other than un-trained reps answering the phone at Nikon.

The rep was just wrong. Nikon will do recalls and service advisory work on gray market equipment. But that's it. Aside from that they won't touch them for any price.

Make sure you are entering the correct serial number. They should be 7 digits. The number you provided above was 8. 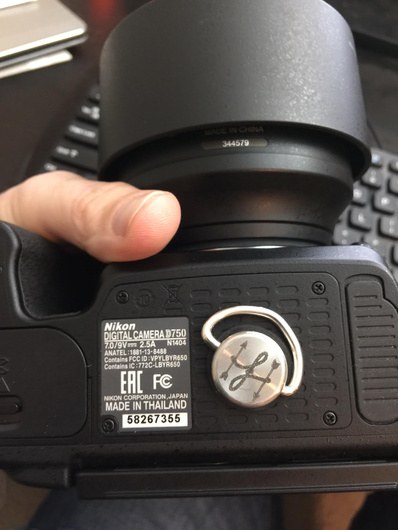 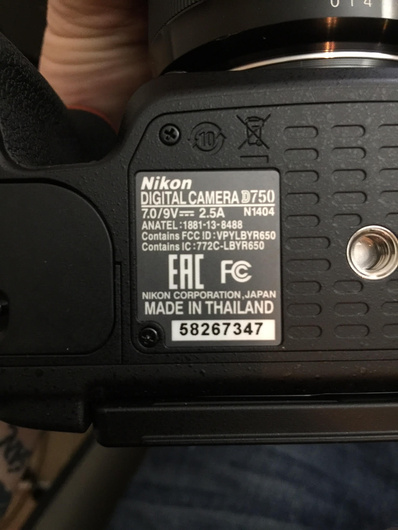 Those may be "fallen off the truck" models...

How can I make them fix my D750 Sean? My camera has the recall issue but they refuse to service it. Now my camera is in Nikon service center but they dont want to fix

Let me explain to you how recalls work. Nikon of Japan is, in many forms, a separate corporate entity from Nikon USA. Nikon Japan sells X amount of bodies for the US Market (the package includes the 110V power plug, English manual, etc.). These models are destined for the US Market, and their serial numbers are catalogued.

Nikon USA is a separate, for-profit entity. They don't perform complimentary work on cameras just because they bear the Nikon name. So when a recall is issued that affects certain serial numbers in the US market, those are the ONLY ones Nikon USA gets compensated for by Nikon Japan.

This works in many ways the same as automobile distribution, and their respective warranties and recalls.

Simple as that. Can't blame Nikon USA for refusing to service models whose serial numbers don't match their records. They won't touch it because any expenses they incur won't be paid back to them by Nikon of Japan.

I'm from Italy and I checked my serial number and it seem that my camera is one that need to be repaired, but the site linkedis just for the US. Do someone knows if this campaign is only for the US or if it's valid in the rest of the world? Does anybody have the correct website for Italy? Thanks in advance

All these issues with Nikon bodies are obviously due to all that extra DR, that's why Canon bodies never have issues!!! *CLEARLY A JOKE, DON'T KILL ME*

Hello guys, I hope somebody here can help me. I got my Nikon D750 with getitdigital less than a year ago and it was my first camera, I didnt know about "grey market" I just saw that it was a good deal that everybody was talking about. During this time I had some random errors in the shutter and when I found that Nikon is recalling some cameras I check my serial number and they told my camera is affected. They gave me the UPS Shipping label and I sent it. But now they are saying that THEY WONT FIX IT because is grey market. I called getitdigital and even that Im still under their promised 1 year warranty they rudely told me that they wont fix it because their warranty doesnt cover recall issues. So here I am, with a 1,700 dollars product that doesnt perform as promised... If you have a tip on what can I do please guide me. And I also share my experience so you know what can happen if you buy from this company GETITDIGITAL that is a big seller from ebay. Also Im very disappointed with Nikon. Im not asking them to fix a problem that I made to the camera but something that came out from their factories...

I'd keep pushing the issue. Nikon absolutely services gray market cameras under recall and service advisory situations. They have serviced mine as well as many others.

If they are still giving you crap, try one of the authorized service centers that are now authorized to handle gray market: https://fstoppers.com/gear/nikon-approves-new-models-repair-third-party-...