Peak Design, who launched a successful Kickstarter Project back in 2011, wants to improve on their original camera clip design by making it stronger and more versatile. Their solution? The Capture system. What they're planning looks to be a beefed-up version of the popular Spider Holsters. It clips to belts, bags, backpack straps and the like and allows for easy and secure access to your camera with a tripod-like quick release system. 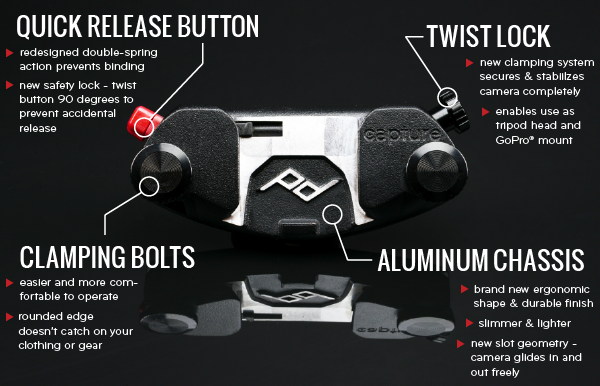 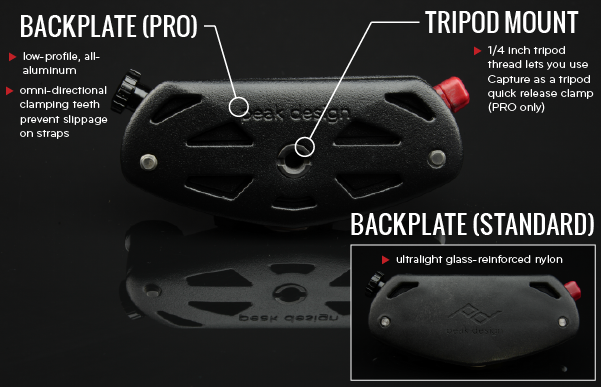 Ok so here is the rundown on the new, upgraded version of their original clip: 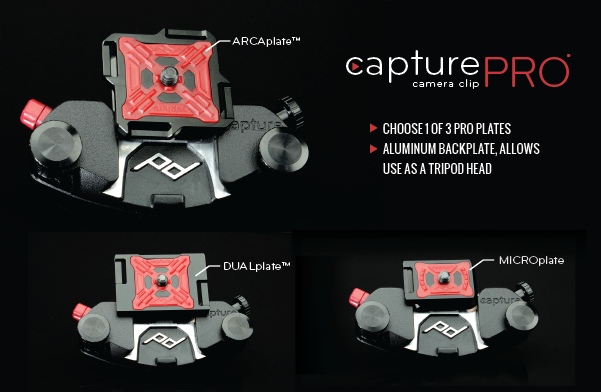 So here is what they are looking to build:

Capture: The standard entry-level version of Capture has a glass-reinforced nylon backplate and comes with standard quick release plate.

CapturePRO: The flagship professional version of Capture features an all-aluminum body and comes with one of 3 PROplates. It can be used as a tripod head and is compatible with multiple tripod systems, as well as sling straps and hand straps.

PROpad: This accessory (for all versions of Capture including v1) provides additional support and padding for folks who want to use Capture with heavy camera/lens/battery grip combinations, or those who are just looking for maximum comfort.

GoPro Mount: This accessory lets you use Capture as a mount for your GoPro®. This lets you take POV video from any backpack strap, belt or strap-like object.

I use this to mount my H4N to my straps. Works well. Sometimes I'll use it to hang my 70-200 on my hip for quick swaps. Good stuff, well built.

Looks good for those who would like to use it (I wouldn't but that doesn't mean it's a bad product.) However, they have a strap called the Leash, that is awesome to use and recommend it.

That way you don't need to apply for a "Concealed Carry Permit". Rather it gives you the freedom to impersonate Dirty Harry on DSLR.

However I can hardly believe that the weight doesn't pull your trousers a bit too far south. Not only making you look like a jerk but also get you a charge for indecent conduct in public ... assuming you are wearing underwear. Otherwise things might even get worse.

Awesome product, if i wasn't WATCHING the video, i'd think it was an Apple video for their newest product....well, minus Jony Ive's british accent lol

I have two of these and hook one to the strap of my camera bag, sling it over my shoulder, and keep my camera right at my chest so when I am walking around, I can quickly click it off and shoot - the strength of these things is amazing and I never worry about it falling off.

This is what I need :D

will my camera pull down my pants?

I'll stick to my BlackRapid. I consider it reliable and comfortable for me.

I ordered one up, looking forward to it..

But if I have a 70-200 F2.8, I thought its bad to have the weight on the camera body as it puts a lot of stress on the neck of the lens and the connection point. Else it would really be cool to have a telephoto hooked like that.