Both Nikon and Sony have APS-C formats for their mirrorless mounts, so why hasn’t Canon followed suit? Many have speculated over whether an RF APS-C camera is in the pipeline, and Canon’s forthcoming lens might be the best evidence to date.

At its online presentation on September 14, rumors strongly suggest that Canon is planning to announce two new lenses alongside the much-anticipated EOS R3. The first is an RF 100-400mm IS USM telephoto with what is now believed to be a variable aperture of f/5.6-8. Canon Rumors reports that this lens will go on sale at $649.

What’s more interesting is the other lens that is likely to be unveiled: a 16mm f/2.8 STM. Thought to be compact in form, images have now emerged after, it is claimed, Amazon inadvertently posted the product page a week early. The other intriguing piece of news is the price: $299.99.

Compact glass for entry-level cameras are typically kit lenses with a fairly average zoom range and an uninspiring variable aperture that keeps down both the price and the size. What’s more unusual is a compact prime, and for a full frame sensor, 16mm would be particularly strange. Such a lens would offer a huge amount of width and would be out of place alongside the other affordable (relatively speaking) primes currently available for RF cameras: the 35mm f/1.8 Macro IS STM ($499), the 50mm f/1.8 STM ($199), and the 85mm f/2 IS Macro STM ($599). A 24mm prime lens would seem a far more logical option.

So, why a 16mm lens? Speculation over Canon’s plans for APS-C and its mirrorless cameras have been rife even before the RF mount was announced. Sony already has its extensive range of crop-sensor cameras, and Nikon introduced its own APS-C bodies once a couple of its full frame mirrorless cameras were established on the market. APS-C offers slightly more compact bodies and a lower price point, which can be a useful means of drawing first-time buyers to the brand and locking them into an eco-system.

Without going over too much old ground, here is the source of the confusion: firstly, Canon’s M mount system doesn’t seem to have a future, but it’s still hugely popular in Asia. Would Canon introduce a second APS-C mount to add to the existing buyer confusion? Secondly, Canon is thought to be preparing an entry-level full frame camera that will be priced at less than $800, making APS-C seem pointless. Just to add another complication, some wonder if Sony might phase out its APS-C cameras, pointing to the a7C as evidence that the a6x00 line could become redundant. Does APS-C have a place given that sensors are cheaper and cameras are getting smaller regardless?

This 16mm f/2.8 prime lens is another curveball. If it were an "L" lens with a price tag to match, it would make a little more sense, but being so compact and with such a low price, it’s more confusing. Do landscape photographers or astrophotographers want a low-cost wide-angle prime?

A 16mm with an APS-C camera might be more likely. A crop factor of 1.6x would give the full frame equivalent of a 25.6mm lens — a decent walkaround focal length that would be a good option for travel. So, is Canon building up to launching an APS-C camera? Certainly, nothing in the rumor mills is hinting that a crop-sensor body is in the pipeline, but it’s hard to see how else this 16mm lens would otherwise fit into the current RF lineup.

Nikon’s recent success with the Z fc might nudge Canon further towards an RF mount APS-C camera. If Nikon is grabbing young customers — customers who evolve into wealthy prosumers — with a compact, retro-styled camera available in a selection of colors, it’s not inconceivable that Canon would come up with something of its own.

What do you think Canon’s 16mm f/2.8 lens means? Let us know in the comments below. 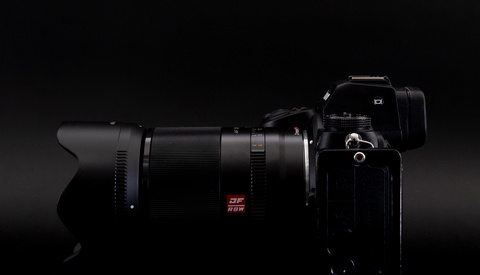 I totally disagree with Andy's APS-C premise. First, if the Sept announcement is about a new RF full frame lens, why introduce a first of it's kind APS-C prime? The other lens will be a fairly cheap full frame (and light) 100-400. Why not fill out the lineup of inexpensive full frame primes.

You're right. I shouldn't have said they were all travel lenses. But that Canon shooters has lots of lens choices available that reach down to 24mm -- or up to 24mm, like the RF 15-35 and new RF14-35 F4. And if you already have 24mm covered, you're less likely to need a 24mm prime.

It's being announced with the R3 and a 100-400mm so definitely a full frame lens, the whole APSC thing is just to get traffic lol.

I don't think that author thinks the 16mm is an APS-C lens. It is just the use-case of _also_ using it on a (possible future) APS-C camera he writes about.
But as mentioned in other comment, I see this lens more as something to make fullframe look more interesting for current APS-C users.

I bet it's full-frame. Canon has been producing many unusual lenses (like the f/11 primes and the f/2 zoom). Why not a sweet 16? Also if they were launching an APS-C RF camera, would a 16 prime be a first lens to launch with?

You're right, but I'm not suggesting that it is solely intended for APS-C — just that compact, lightweight wide-angle primes might be a hint that APS-C may lie somewhere in the future. 😁 On its own it would certainly be an odd way to launch APS-C, but this, along with something like a similarly compact 24mm f/2.8 could give APS-C — revelaed alongside a couple of slow, variable aperture zooms — a solid foundation for its launch.

Or maybe a RP II?

It's a full frame lens though and has never been reported as a APSC one. Also 16-35mm is a common zoom range so makes sense for there to be a 16mm prime. I would much rather carry 16mm and 35mm primes than a zoom.

I already have a dx r camera. Just use 1.6x crop mode

Why do you use the word "proof" in the title, when you have no proof? What is this low level click bait. I got more compelling arguments in the comment section than this article..

Unfortunately I see the two new rumored lenses to be a sign of the opposite. Canon are trying to convince APS-C users to move to fullframe. And frankly I am for the first time tempted to make an R6 my "standard camera". I have the 7DII and more than 10 lenses, but the most important "kit" is my lightweight 3-lens kit I can carry all day when on a trip...

Of course I loose some versatility by replacing my favorite zoom, the APS-C 10-22mm, with a 16mm prime, but more than half of the photos I shoot with the wideangle zoom are probably shot at its widest (equal to 16mm fullframe) anyway. The new RF 14-35mm represents my dream range for a wideangle zoom, but at 540g and the very expensive price of $1700 it is not really an option. Unfortunately :-(
And btw, I deliberately choose the cheap EF 24-105 STM over the cheap RF 24-105 STM. The RF lens just seems to be too much of an optical compromise to me. The EF lens looks like it is a much better buy, and luckily there's still lots of the discontinued lens to be found around (at least in Denmark).

PS. I already have purchased the R6 and EF 24-105 STM. I just couldn't wait to play with animal eye AF. But so far my "standard alround kit" is still based on the APS-C 7DII. But I am looking forward to reviews of the two new lenses - and the final weight of the 100-400mm. But even if I decide to switch my standard-kit to fullframe for now, I still hope to see an R7 in the future and would probably change back to APS-C then for added light-weight versatility.

Am I the only one who thinks the price is everything else than a good deal? (Edit; If it is APS-C),

Why is that lady in the red top and red lipstick standing next to the lens in the lead image? What does she have to do with the article or lens in question?

Profoundly poor logic.
A 16 is ~24 on APS-C. Scarcely a convincing intro for a new body/format .

What it IS proof of is Canon's ability to deliver a compact, low cost prime.

So much for "Proof That Canon RF APS-C Is on the Way" - RF16mm F2.8 STM is officially released and it's a full frame lens. Actually the compact and affordable RF16mm F2.8 STM is a proof that RF will stick to full frame.
https://photostudio.org/canon-completes-another-chapter-in-the-rf-lens-s...

Was just about to make the same comment. This fellow should look more into ethics of journalism..

It seems almost every commenter here misunderstood the article. Andy is not suggesting it is an APS-C lens, just speculating on its potential used on possible future APS-C RF bodies.

Well, maybe Andy Day actually had a valid point?:
https://www.dpreview.com/forums/post/65487298
Or just someone that used an old template from EF-mount days?

Anyway, meanwhile I have rejected the idea of making a "light-weight fullframe kit" partly based on the new RF 16mm/2.8 (as I talked about in other comment). From MTF chart only the center of the lens seems really good. Probably not unexpected given the small size and weight of the lens, but I had a hope for more.
https://cweb.canon.jp/eos/rf/lineup/rf16-f28/spec.html 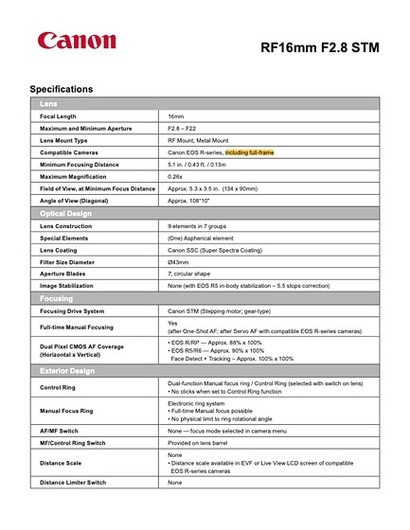 It's overpriced, underpowered, and totally underwhelming