Four Photographers Battle It Out in Three Spontaneous Challenges

When four amazing photographers are in the same location shooting the same model, there is bound to be a little competition. But add in three unknown challenges with a set of difficult limitations, and you have a recipe for great entertainment.

In this video, we get to see four fantastic photographers go head to head with each other to try and make the best image possible. The stipulations are that each shooter only has five minutes to work their magic for each challenge, they need to pick their final image right after their turn, and all images will be taken with the new MagBox from MagMod. They also don't know what any of the challenges are until they get ready to start each round.

For challenge number one, they are tasked to take a “soft as butter” three-fourths portrait of the model using off-camera flash. The tricky part with this task is that they need to overpower the sun while not using high-speed sync.

Challenge number two is called “one shot” and each photographer is only allowed to take a single image of the model. They can use as much of their five minute time limit they need to dial in their camera and composition though. To make things more difficult, two of the photographers decided to incorporate the model performing some type of movement.

The last challenge is dubbed “not your grandma's studio.” For this challenge, the shooters need to use their off-camera flash to kill all ambient light in an effort to mimic the same black background you would get while in a studio. The last stipulation here is that they need to use the focus diffuser on the MagBox. What this does is acts as a type of grid that limits the light spill from the MagBox.

Who do you think won the challenge out of the four photographers? What was your favorite single image? Also, after you watch the video, make sure to check out Marlies Hartmann, Shivani Reddy, Elmer Escobar, and Trevor Dayley to see more of their amazing work. 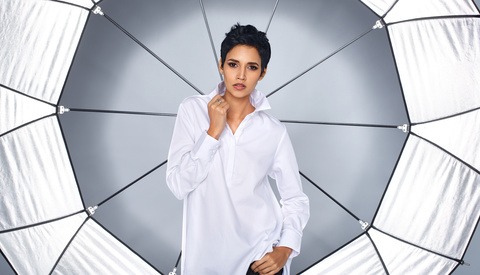 Why in this kind of videos they always "are here in California"?