After Apple’s WWDC conference on September 12, many consumers were excited to upgrade their phones to the latest flagship phones, the iPhone XS and iPhone XS Max. One of the biggest selling features of these new devices were the upgraded front and back cameras. Now, after about a week or so of the phones being in the market, people are beginning to notice something strange in the camera.

Personally, when I received my iPhone XS Max in the mail, I immediately noticed the front-facing camera was most definitely not the ultra wide lens I was accustomed to. Instead, my silly Snapchat photos were extremely zoomed into my face and appeared fuzzy and pixelated. After doing some research, it seems as though Snapchat just needs to upgrade their UI to cater to the larger screen size.

Putting that aside, there was a total storm on Reddit the other day, where users noticed a filter being applied to all of their photos on the newer models. One Reddit user went as far as taking a photo on an iPhone X and an iPhone XS to showcase the difference.

And thus, came the storm: Beautygate. The effect is similar to “beauty mode” seen on many other phones and apps, but Apple’s made it impossible to turn it on or off. You can tell that the front-facing camera natively smooths out and brightens your skin to look more polished.

Lewis Hilsenteger of Unbox Therapy goes as far as saying “it looks like I’m wearing foundation” after trying out the front-facing camera with and without Apple’s new “Smart HDR” feature. See his side-by-side comparisons in the video above.

What do you think of Beautygate? Sound off in the comments below.

This is only for selfie cam? I am safe then, not taking selfies:-) What is snapchat?

It feeds the dummies.. They will say "Iphone has a better camera because I look better in it".. And they will believe that's how they really look.. Tinder needs to have an iPhone 10xs photo warning.

are implying that I am a dummy because I own an iPhone ....?

Do you believe one of the following?

1. The iPhone has a better camera because you look better in it.
2. The selfie you take with you iPhone is how you really look.

If the answer to either is "Yes", then I guess he's implying that you're a dummy. If it's "No", then I think it's not referring to you.

I don't take selfie , I don't care what phone you have , I like my iPhone and if you like like your Droid better then , good for you !!!

Like Micheal and I said.. If you're not gonna run around taking selfies and thinking you're naturally beautiful because the iPhone takes such great photos, then the comment doesn't apply to you. Getting all butt hurt when the comment wasn't even slightly directed at you if you don't take selfies.

Agreed! Apple should give the user the option to turn it off completely. I rarely if ever use the front facing camera, so it doesn't bother me too much, but that 1 time I might want to use it, I def don't want a beauty filter applied. I mean hey, isn't that what frequency separation is for? - HAHA! Seriously though learn to D&B, don't use FS to much if at all, it looks just as bad...

Apple should offer users the chance to turn if off. Slightly OT, they should ALSO offer the option to always go to the zoom lens when you request it. Now, if you select 2X you get the 2.8 zoom lens if Apple determines there is sufficient light, and otherwise you get the 1.8 wide lens with a 2X *digital* zoom. Ouch! (I get around it by using Camera+ which will use the zoom lens no matter what the light.)

Fall further into The Matrix...

"Apple" and "options" are two words that have never been known to fit together particularly well.

Usually the people who wanted options went for Apple's competitors. Here we are again.

After owning one iPod and one MacBook Pro I will never will buy another Apple product. Bad customer service, ridiculous pricing and average quality. No thanks.

I would agree with rediculous pricing only.

Compare to what's out there (laptops, phones, tablets etc.) their product is the high end of average.

I'd say even more. A very average spec macBook Pro with 16GB RAM and a very average Radeon video card and 1TB SSD and a 15" display is $3300. I bought an Alienware laptop with a 17" display, 32GB RAM, 512Gb SSD plus 1TB drive, nVidia 8GB card for $2500. Apple overpriced? Absolutely. On top of that the new macBooks pro are overheating like crazy. Returned mine within a week of receiving it and they gave me the runaround claiming that online orders couldn't be returned at a local Apple store. No more Apple for me.

There are several issues with 2016 and forward MacBooks.
The keyboard and also the screen.
They will replace but evidently it's not wery well made. Just bought a used 2016, and first I needed to go and replace keyboard. Finally I set it up only to find the screen also have issues.
Where I live 5 years warranty is mandatory, that's what you need.
And maybe a spairfor in between service.
Oh. The previous I had came with a flawed USB port.

I have a Samsung phone and I swear it is either completely terrible (very possible) or it's constantly in beauty mode. It always looks like that horrendous over blurred filters are being applied. Can't people see that these filters look far worse than an image SOOC? Luckily I don't really use the front camera ever.

I have Fuji camera and it does the same :)

Not sure which Samsung you have but there is a beauty mode in the front facing camera, that within 2 clicks you can turn on/off/or adjust strength.

Yeah, I found that setting and it was already turned off. It still seems to look like a blur is being applied to the face.

The worst part is that many people on Instagram will use this beauty mode, and then still try to put the photo in Facetune or something. Bring on all of the fake selfies. From a photographer and editors stand point though, I’ll bever be fooled. I know when the selfies have been touched with an app like that. I think it’s a terrible thing too

Ever considered that it's due to (too much) noise reduction? Because the blurring applies to the whole scene, not just faces. But I guess when a YouTuber says it's a beauty filter, that must be what it is.

That aside, I'm generally not that happy with the quality that the built-in camera records. It may look fine on the phone screen but on the computer the rather horrible compression becomes apparent. Now that they have HEIF, I'd rather they would keep the image at the same file size as a JPG but with better quality than keeping the same lossy quality at half the file size. But yeah, unfortunately no option to change that.

It's not noise reduction (or not just that). The skin seem uniform and that's a result of smoothing which reads neighboring pixels and tries to average their exposure.

Here is a more detailed explanation of what's going on (and yes, there is a lot of noise reduction as well as less contrast):
https://blog.halide.cam/iphone-xs-why-its-a-whole-new-camera-ddf9780d714c

Thank you for the link. I started reading it but I honestly did not have the patient to read this whole article.Looks like a sponsored article anyway.

The end results are important and so far just about all agree that it makes portraits look pretty bad. It seems to recognize faces and put even an heavier effect on those.

Not to sound cynical but in my opinion, instead of investing in a better camera and lens like Huawei and Samsung did (and keep doing), Apple went for the more economical software approach. We already know Apple cut corners regarding their screen to save money.

I saw examples on Youtube and other places. It's bad. Period. And no, taking off HDR does not negate this over editing look. Nothing does.

I'm not sure that the cameras are bad per se, rather the computational processing of the image needs work. I hope they will improve that.

Yes, it does affect hair as well: 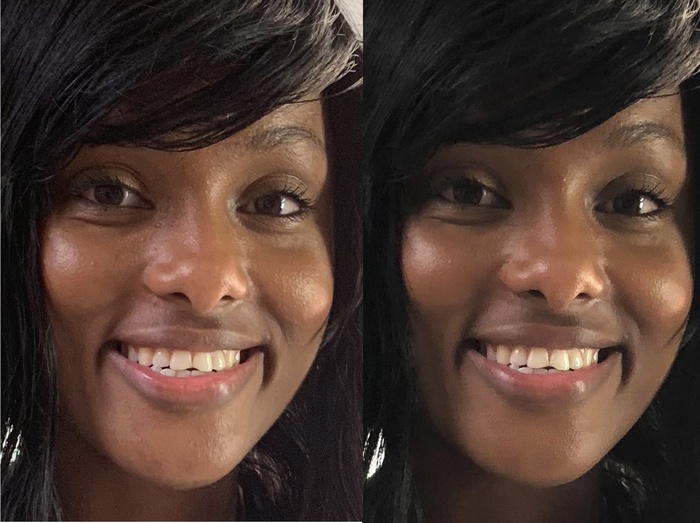