Merrell, an outdoor footwear brand, wanted a photography concept that would celebrate diversity on trails, but in a way that felt genuine and reflected reality. While outdoor brands usually look towards more of a traditional commercial photography approach, Tim Kemple had something else in mind to achieve their goals.

On September 1, 2018, 50 photographers set out on a trail in their respective states. Their collective goal was simple: to capture what they came across on the trails, specifically focusing on the diversity of landscapes and people who happened to be there. Tim Kemple of Camp 4 Collective along with producer Stevie Meier worked with Merrell to bring this concept to reality.

TK: The best way I could think of was to make it unscripted. No models. No influencers. Instead, the local communities and characters that were naturally out on the trail on that given Saturday in September. It’s not glamorous or loud and flashy, but if you stop and think about it… Wow, this was all captured in the same day. That’s how this photographer saw this particular landscape.

The concept materialized as a multi-state, multi-photographer project that would rely on images being captured from each of the 50 states on the same day. Stevie Meier was tasked with assisting with the research and recruitment of 50 different photographers in a very short amount of time.

SM: We had a little less than two weeks to research and connect with photographers in all 50 states. Luckily, I had the amazing support and industry insight of Tim Kemple and an unbelievable team of Merrell employees who all helped compile a running list of photographers we knew from every state. I was amazed that by putting our shared knowledge and experience together, we were able to discover so many talented artists. It certainly was a daunting task to work with 50+ creatives all shooting on the same day, but each photographer really stepped up to own their part of the planning process. 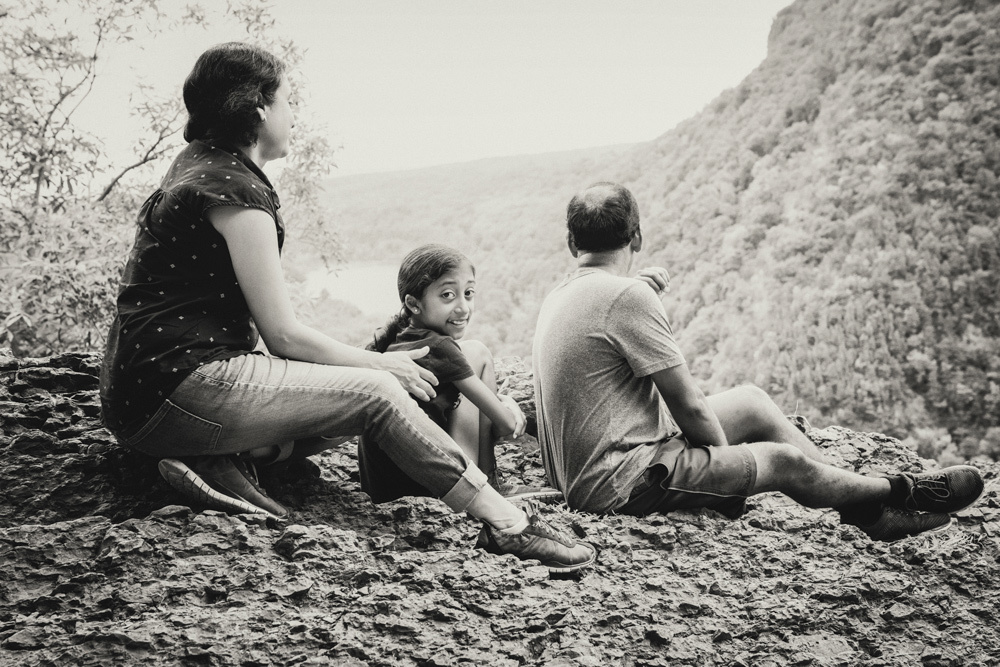 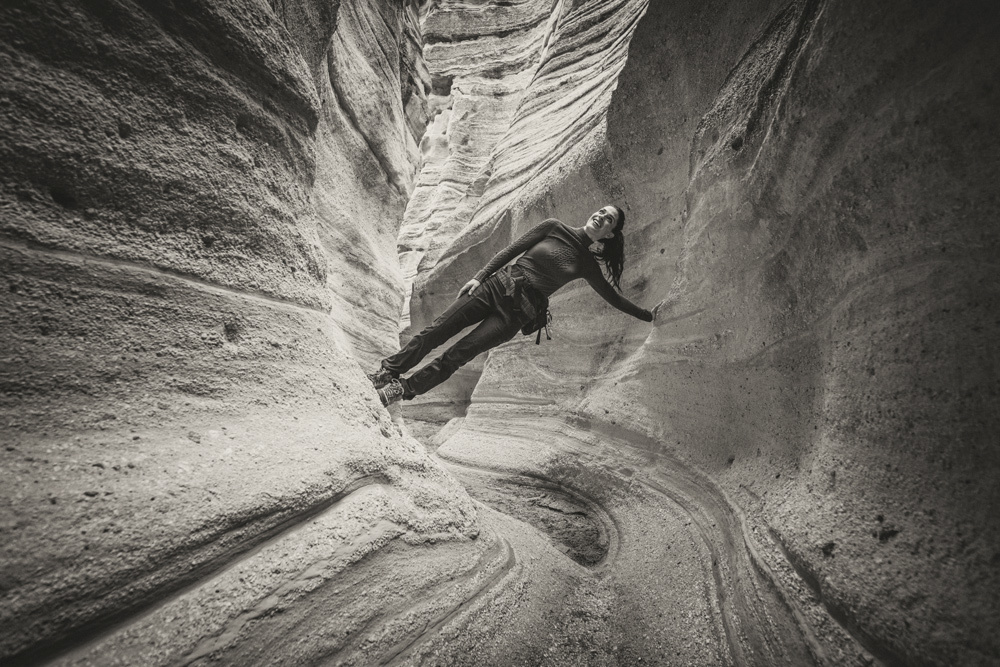 With all 50 photographers confirmed and their locations assigned, September 1 came and went. Given the documentary approach, there was some fear that a few of the images might not turn out due to weather or limited subjects, but both Stevie and Tim were elated when the final photos came in.

TK: I asked each photographer to send over their 10 favorites. And it was honestly like Christmas. I was completely blown away. 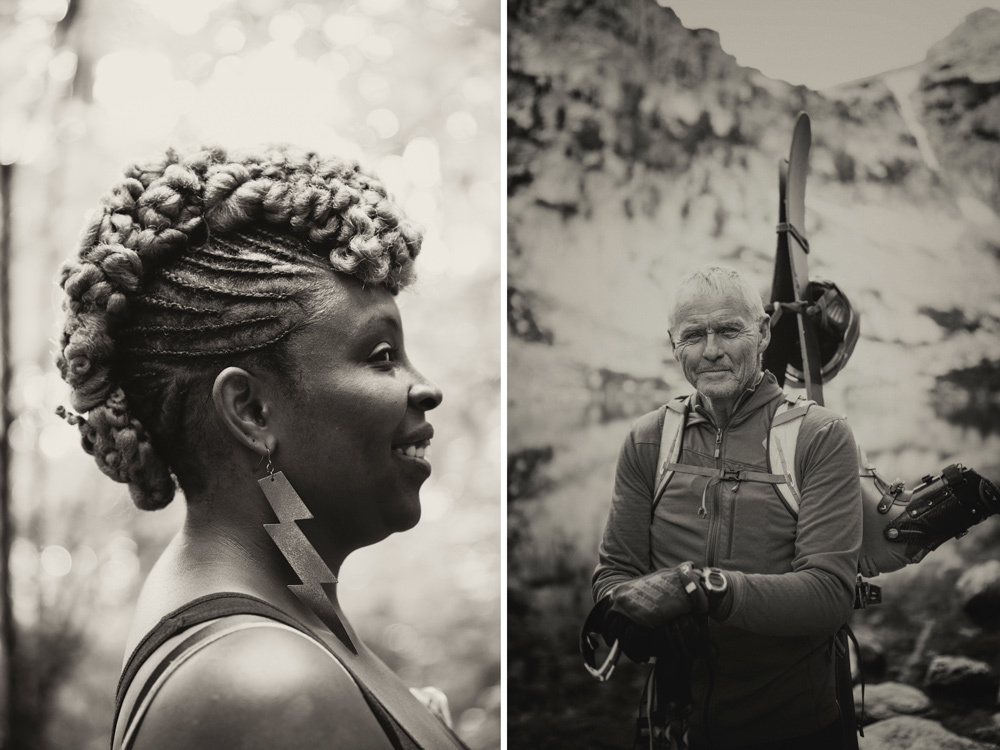 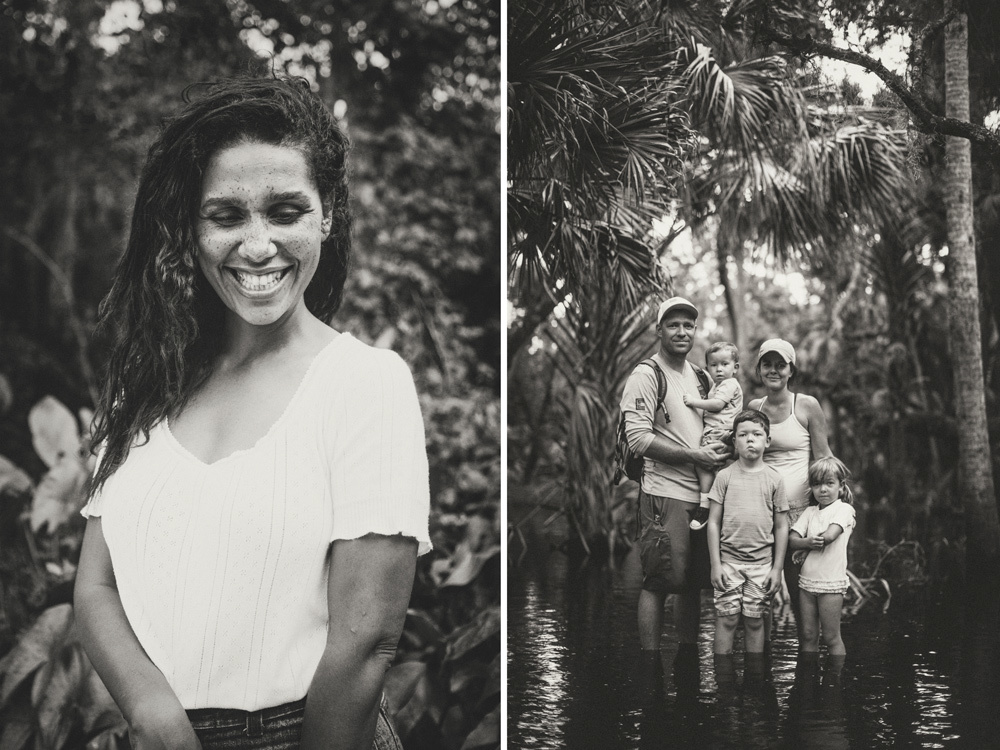 SM: I couldn’t have staged or casted some of these shots better, even if I tried. Despite thunderstorms (Kentucky) flooded trails (Florida), or traveling 90+ miles by train, Uber and foot just to get to the trailhead (New Jersey), both the photographers and the subjects they captured really showcased that although there are different backgrounds we come from and obstacles we encounter, that there is this unifying nature of the trail. 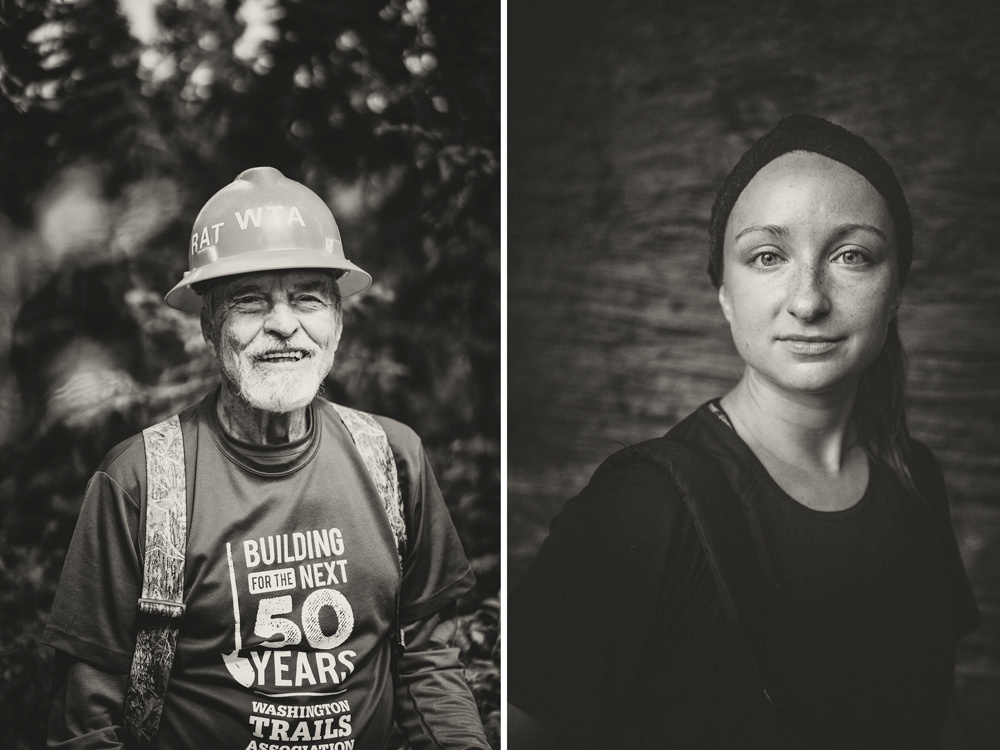 Tim and his team went on to make the final image selections and processed them in black and white. An interactive website was planned as a part of the launch, but Tim was passionate about finding an event or location to host a gallery event to display some of the images and really celebrate the work that had been done. An opportunity presented itself in the form of the Outdoor Retailer Show in Denver, where Merrell was going to have a large booth setup alongside 100+ other brands. 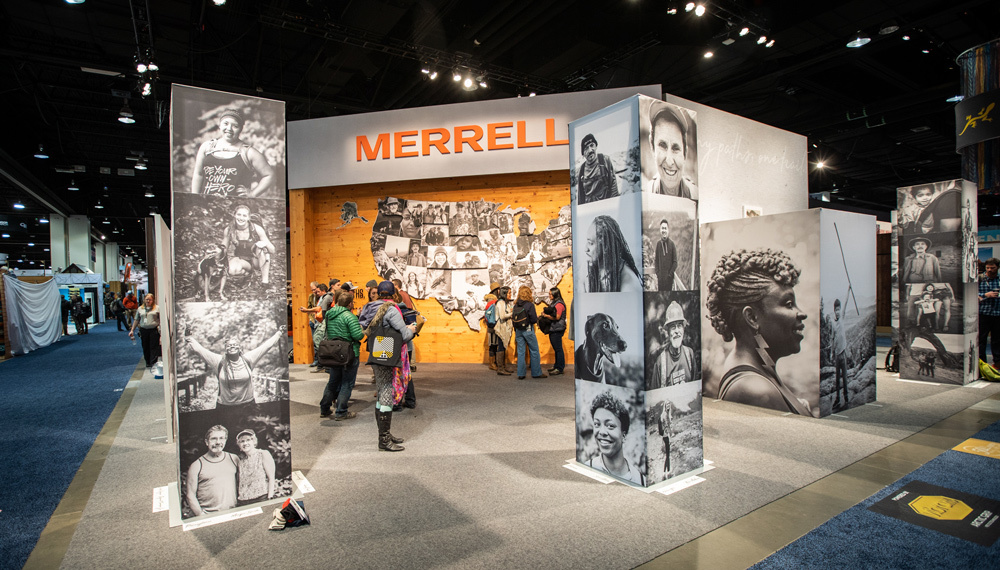 TK: These days, as photographers and filmmakers we often pour our heart and soul into a project and then immediately move onto the next without taking a moment to pause, reflect, celebrate, and thank the people that made it happen. It was great to see so many talented photographers hanging out with creative directors and designers from all these different brands. 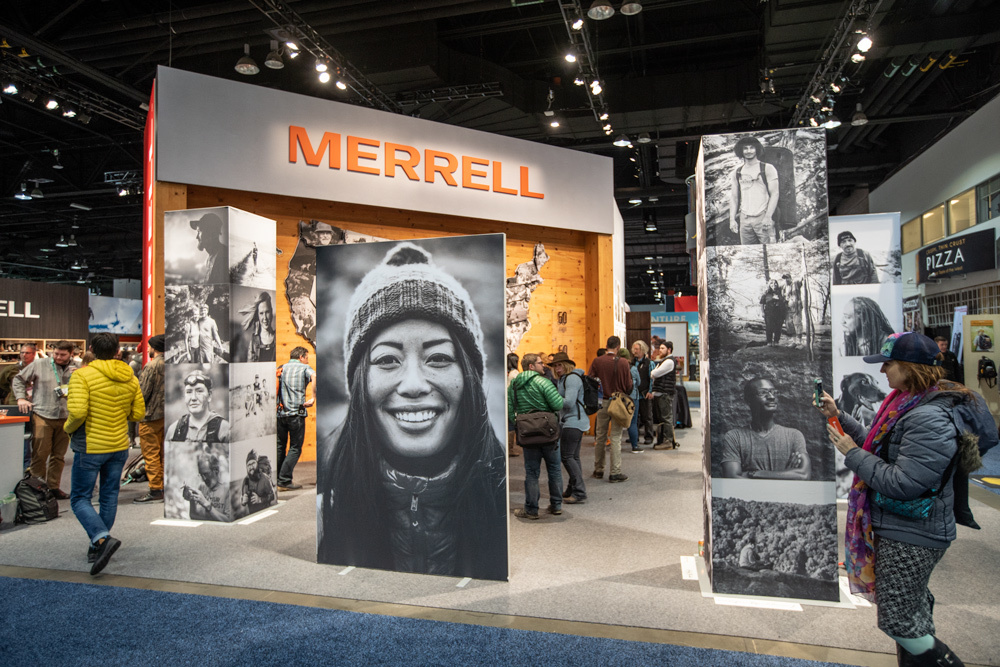 SM: Having the opportunity to print the photography large scale and put it in front of an audience who is used to seeing more stylized and product-forward photography was incredible. As a brand, I thought it was amazing that Merrell decided to devote the entire front of their trade show booth to photography that did not include any product. They led with people over product, which felt significant and a statement of its own.

Attending photographers hung around to chat and network while taking in the scope of work both by themselves and their peers. As one of those photographers, I can honestly say that it was invigorating personally, not just professionally, to be a part of something larger than just my own work and join in the celebration of diversity and outdoor recreation. 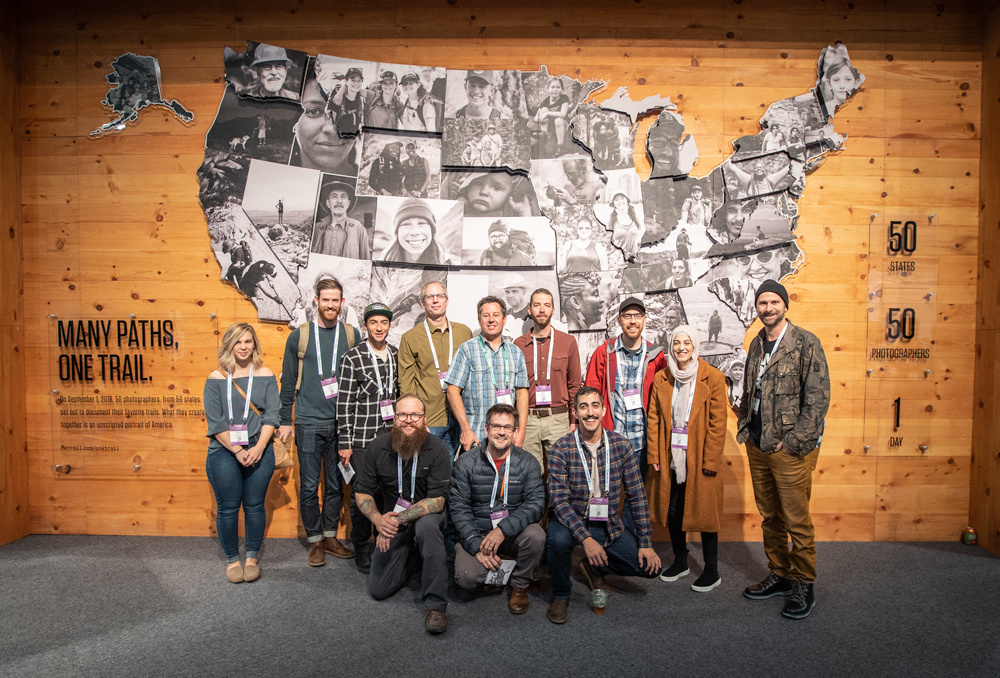 TK: It was important for this project to feel like a moment in time and be more journalistic in its approach. By leaving things unscripted, you are left with an honest, and truthful portrait of the outdoors through the lens of these 50 different, talented photographers all captured on the same day.

To check out the interactive map of the U.S. and browse the different images captured by all 50 photographers, head over to the Merrell One Trail website.

Landscapes
Get Out There and Shoot

Landscapes
The Stranded Photographer: Making the Most of an Unexpected Stay in Arizona
Log in or register to post comments

Beautiful. This is the real America: multi-ethnic, multi-generational, all out enjoying the natural magnificence of the country.

Hey Jack care to elaborate on giving me a thumbs down for this positive and benign statement? Is it because I've told you in the past I get off on them and you just want to please me? If so, thanks!

What a fantastic idea to celebrate. Well done.

What a fantastic campaign! So nice to see the people I see on my hikes represented in this campaign. As Tim pointed out. This is the real America.

I particularly love the woman with the lightning earring. She may be roughing it, but that doesn't mean she can't be stylish lol!

Great article and fun project but I am curious, were the photographers paid? I hope I didn't miss it somewhere.

Yea I ask because if they weren't then Merrell got a big ambitious project done for free, at least the commercial photography part of the project. I'm guessing all the other vendors were paid full price though so there is that if my suspicion is correct.

@Kendrick - yes, the photographers were definitely paid a fair rate for the shoot + usage. Thanks for reading!!

Y'all should go to the site and look at all the images. I was also happy to see a number of American Indians profiled in the project! Nice representation.

The correct term is Native Americans. I realize you weren't aware, but many are offended by the term you used.

Not necessarily, the terms are often interchangeable. And the community is split in the usage. Why would you think I’m not aware of that?

The terms are not interchangeable. To many Native Americans, the term is as offensive to them as the n-word is to people of African heritage. If you were aware of it, then you shouldn't have used it. I know many Native Americans, the majority find the term you used offensive. Polite persons don't use terms that are offense to an ethnic group. A polite person would use the term the ethnic group doesn't find offensive. I was giving you the benefit of the doubt, but your response shows that you are not a polite person.

Listen, Brian, you’re making a lot of accusations here about my intent. Chill the fuck out.

Your anecdotal evidence is frankly meaningless in the general conversation on this topic. Now, if a specific indigenous person asked me to refer to them with a specific term I would. But your accusation that it is offensive to many frankly isn’t ground in reality.

A Department of Labor survey concluded that 50% of people of indigenous ancestry in the US preferred the term “American Indian” while only 37% preferred “Native American.” https://slate.com/news-and-politics/2004/09/american-indian-vs-native-am...

The Lakota political activist (and co-founder of the American Indian Movement) penned a strong essay in favor of the use of the term “American Indian” over “Native American” http://compusci.com/indian/

And for further evidence, here’s an article from Indian-Country today that surveyed a number of people, each with their own opinions on what they’d like to be called, including some who preferred “American Indian.”https://www.google.com/amp/s/newsmaven.io/indiancountrytoday/api/amp/ind...

As well as an editorial board of the Native Times that specifically called for the removal of the term “Native American” as a concoction of politically correct white people:
https://nativetimes.com/index.php/life/commentary/11389-native-american-...

Hell, even the dictionary uses the terms interchangeably: https://www.merriam-webster.com/dictionary/American%20Indian

So contrary to your position, there is no agreed upon term for this group, and there is certainly not a consensus on the phrase “American Indian” being offensive or perjorative. Quite the opposite.

So I’ll POLITELY asked you to check your faux outrage at the door, quit making assumptions about my intent and morals, and stop “defending” a people who mostly don’t want you to speak for them.

Why is it that the feeble minded always resort to profanity to cover their own inadequacies?
If you are unable to convey your thoughts without resorting to personal attacks laced with profanity, you are a sorry individual indeed.
Are those surveys by the same people that claimed Hillary was going trounce Trump in the 2016 elections?
Surveys are constantly proven to be inaccurate. But even so, if 37% are offended, then why use the term? I never said 100% are offended. Just as the n-word offends many, but not all, polite society no longer uses the term. Political correctness has nothing to do with it. It is just common courtesy.
A friend of mine who is Navajo, agrees with me 100% and she is happy that I am speaking for her and her people. Her adapted sister, who is Hopi, also prefers Native American.
Stop being hypocritical with YOUR faux politeness. Everyone can see you are a major jerk.

Wow so many problems with your post. Let's begin:

1) I'm a fan of profanity. So go fuck yourself if you have an issue with it.
2) I've listed multiple forms of evidence, none of which you have the ability/desire to review with any specificity. So who's the feeble-minded one here?
3) Uh, no, a survey by the Labor Department are not the same people who projected a Clinton win. Projections are very different than surveys, you dumbass.
4) Read closely: a preference for a specific term does not equate to offense for another. 37% preferred "Native American," that's not 37% of people who were offended by "American Indian." I prefer Tim, that doesn't mean I'm offended if you call me Timothy. Get it? I'm not sure you do.
5) You know 2 Native Americans?! Neato! (see, now that I know those 2 specific people use that term, I'll reference them as such). But yet again, read what I wrote: your anecdotal evidence is completely meaningless to a general conversation on the topic. Do you understand what anecdotal evidence is?
6) I wasn't being hypocritical. I was making fun of your bullshit. But the gloves are off, hotshot. Any veneer of politeness is gone. And I've perfectly fine being a jerk because I'm right and you're wrong.

Now if you want to actually address the multitude of evidence I've presented, I may decide to respond with counterpoints. But if you're just going to dick around with your SJW cowardice, I don't have the time to give a shit about you.

I have to pick a nit, though. The first series in California is mislabeled. The Half Dome photos were actually taken on the "Cable Route". "Snake Dike" is a technical climb on the opposite side of the dome.

Love it. Interesting to see how companies interpret the "realism" trend.

What a wonderful idea!