DJI Claps Back at GoPro With the Osmo Action

As Omar famously said on "The Wire," you come at the king, you best not miss. When GoPro decided to get into the consumer drone market with its Karma quadcopter, it was taking aim squarely at the king of quadcopters, DJI. And it missed. Now, DJI is coming for GoPro with the release of its new Osmo Action.

I have to admit, upon DJI's announcement Wednesday of the Osmo Action, I was disappointed to see DJI was getting into the action camera market, instead of expanding its drone market to a new frontier — the ocean. DJI dropped a teaser ad a week earlier, depicting a free diver floating weightlessly underwater with the tag line, "Unleash Your Other Side."

Given that DJI is known primarily as a drone manufacturer, and given my own personal enjoyment of flying my Phantom 3 4K, my mind immediately jumped to the conclusion that DJI was preparing to unleash an underwater drone, a consumer submarine capable of going where previously only divers and scientists piloting multimillion-dollar ROVs were able to go.

I wasn't alone in that speculation, as the internet turned up numerous stories, videos, and social media posts positing that DJI might be releasing an underwater drone. It isn't far fetched, after all. There are already consumer underwater drone cameras on the market, such as the Gladius Mini Underwater ROV, from Chasing Innovation. But as the undisputed king of consumer drones, DJI jumping into underwater drone photography would have been interesting to say the least.

Instead, DJI has its sights set on the king of the action camera market. GoPro, for its part, seems to be recovering from the disastrous launch of the Karma drone, which sent the company's stock spiraling down 30 percent in 2016, when it had to recall 2,500 drones and eventually ducked out of the drone market entirely. Despite that massive downturn three years ago, GoPro has remained the gold standard of action cameras.

With a healthy lineup of drones, accessories, and other products, DJI is better positioned to risk jumping into the action camera market than GoPro was to get into drones. But brand image can be a fickle thing, and while DJI is known for top-notch consumer products, an inferior action camera would certainly hurt the company's reputation.

Fortunately, as Fstoppers colleague Ty Poland writes, the Osmo Action is cheaper than the Hero 7, has more features, and seems to be built ruggedly with quality materials. The front-facing display looks like a differentiator for DJI, as it allows action junkies to see what they're filming when setting up a selfie video. The early reviews suggest DJI has built a worthy competitor to the GoPro Hero 7.

DJI better have. They're going after the king. They best not miss.

What do you think of DJI's foray into the action camera market? Will you switch from GoPro? Drop a comment below and let us know what you think.

GoPro is still offering 100 off on the trade up program and I have an old, crappy knockoff action cam that qualifies so I'll be taking advantage of that. I have the Hero 5 with a lot of accessories so I'm going to pass on the DJI this time around.

The OA is compatible with go pro accessories.

Gopro really hasn't done much the last 3 iterations of their cameras, especially not compared to the competition. Also their debacle with their fiasco drone haven't done the company any good..

DJI on the other hand has done a lot of things right lately with their introduction if the Mavic lineup. If they tackle the action cam market the same way they have the drone market they will proba my dominate it soon as well.

If you don’t think much has changed from the Hero 5 to the Hero 7, you’re crazy and aren’t using the cameras you’re speaking about.

Yes stabilization has changed, but other than that GoPro has not done much in terms of IQ. Now you might think Gopro is the best thing since sliced bread and that's fine, I wouldn't call you crazy for it though.

I don’t think it’s the best thing ever but I 100% believe it’s the best in the market by a long shot.
HDR capabilities for photo and video, two different types of stabilization, face and smile detection, 4k at 60fps, and filters out wind noise...

How have they not improved in the last three iterations again?

HDR.. lol yeah you really bought the spec sheet, didn't you? Smile & face detection does not affect IQ, and its usefulness depends entirely on what you shoot. Their IQ has not changed that much in 3 iterations. Considering initially the Hero 5 had better IQ than Hero 6 their IQ progression between those was mostly software based.

Bottom line, GoPro will have some serious competition in a company like DJI with all its muscle and experience. I would not be surprised at all if DJI completely dominates the market in a couple of years like they did with the entry/semi pro-drone market.

Don’t downplay the facts, HDR matters to a majority of their consumer base. It’s an action camera and is the best in the market. Your ignorance and experience in that market is clear.

I gave you facts and you came back with projections. I applaud your effort.

My ignorance and inexperience, that's hilarious Eric... I've shot with multiple Hero's 7, (my brother has a pile of them for his RC cars) Osmo pocket, Sony FDR1000/3000. Unlike you I don't think the Hero 7 is the best thing since sliced bread nor does it beat the competition across the board, even the old FDR3000 outperforms it in some instances.

It's a good action camera no doubt, but it's not without competition and certainly not when DJI has entered the race.

Paul, you are a true gentleman handling a pest like Salad. I just got the Hero 7 and was similarly excited by all the hype as I was upgrading from a GoPro 3+. I'm not a fan of sliced bread and I guess I was expecting more from the 7. I used it the same venue as I had used the 3+ and even with custom white balance the color from the 3+ looked better than 7. also the 7 is way too wide even on linear 1080p mode for the times. the 3+ has a less wide angle option and i think the dji also does. also a lot of the options are locked out depending on 4k vs 1080p and frame rates. i'm returning it.

The troll lives, welcome back Sir! Your continuance to play games with my name is always hilarious.

Over 500+ comments between Three of you with no photos. Quite the triple team of hemorrhoids we have here. (Since Paul liked my analogy)

Eric Salas I use my full name and with the click of a mouse, you can get on my website and social media where my email and phone number is accessible for everyone.

So you can stop playing the troll victim now.. I've noticed your big on commenting on other peoples work or lack thereof and try to gauge their experience compared to your own. That will not do anyone, any good, trust me.

Lack of work is different than showing any work at all. My website is available as well.

Your brother owns a pile of them so he must not care for your opinion either.

Have a great day !

Paul, please ignore this guy or please send a message to Lee or an admin . He's trying to be a bully on these forums and frankly it's sadly comical to watch. His show me your photos tripe is as tired as his pile of bikini photos. He sits on the shoulders of midgets and thinks his view is above all others.

side by side, cannot tell footage from a hero 3 to the latest all that much, I would say they havent improved in a MUCH longer time than the last 3 iterations.

Yea they are pretty trash cameras. I’ll should just bomb hills with my A7Riii 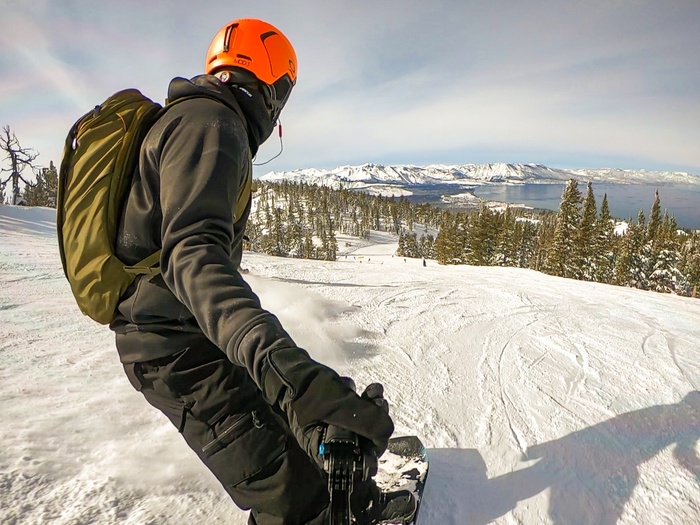 So in a nutshell, DJI cloned the GP form factor almost perfectly and so shamelessly that they are even running the same marketing campaigns that GP ran into problems with where the average user is never going to produce footage like in the commercial unless they happen to be a top 1% elite adventure athlete being followed around by a professional videographer.

It worked great for the first couple generations of GP until users all realized their GP spent all its time on the shelf because in 95% of real-world situations taking a video of everyday life you might as well just use the camera that lives in your pocket that is attached to your phone. Kinda dampened repeat customers a bit. ;)

Marketing will be the same because the cameras consumer base is the same. For the ones who use it for both regular activities and extreme sports, we can attest to why they keep selling and improving them.

I welcome DJI to the market but I wish they would have brought something new to it instead of offering the same thing.

Typo Notice: “The front-facing camera looks like a differentiator for DJI”

Yep, good spotting on the typo. Thanks for the heads-up.

RIP GoPro. Good riddance, tbh. The forced use of the app for older models, the forced account to use a camera where there's no reception, the dropping of their original gopro studio software for the "Quik" editor, which is garbage... not to mention the Karma, and underwhelming gopro releases for a few years, that company has been dying for a while now.

not a fan of gopro

but them putting out expensive gear makes others make alternatives for much cheaper.

so keep on gopro! your success brings me success.

I made the mistake to buy the GoPro Karma drone and GoPro Hero6 Black. After a whole year of warranty repairs, I got tired of their inkompetense and switched brand to DJI. With this decision also my technical problems ended.
What I definitely do not like about GoPro is that if they have major problems with their product's functionality, they release a new model instead of solving the customer's problems with the camera they already have.
Yes, I bought a GoPro Hero7 Black because I have so much accessories for it from my previous GoPro. The 7th also have technical problems, but not as difficult to resolve as with the 6th.

As for the picture quality that I have seen on YouTube so far, it is not that great leap to something better with DJI's action camera. So I will continue to shoot with my Hero7 Black :-)

Do not forget that the specs match the GOPRO 7 of last year, not this year.

This could be the worst use of the phrase "clap back", please dont ever do that again

The 4K crop when the stabilization is on is a joke... GoPro 7 kills it.

I'm sure DJI will get better.