Fstoppers Reviews the Insta360 Pro 2: The Step up in User-Friendly 360 You're Looking For

There are a plethora of 360 cameras that can do a fine job creating immersive content for under $500. But when you need to move from “do a fine job” to “do a really awesome job,” there you’ll find the Insta360 Pro 2, waiting for you.

With its six lenses (four more than the sub-$500 models), soccer-ball shape and protruding antennae that make it look a bit like Disney’s beloved Stitch character, it’s clear that you’re in for something different with this camera. At around the $5000 mark (give or take holiday sales), the Insta360 Pro 2 isn’t even the craziest rig you can get from the company (that would go to the Titan, which sports 8 lenses hooked up to Micro Four Thirds sensors for $15,000).

But let’s put the Titan aside and take a look at why a content creator would want to step up to Insta360 Pro 2. Insta360 loaned me a camera for a couple of months to put it through its paces. When you’re stepping up to this level of camera, there’s an expectation of higher image quality, and that this camera delivers in spades. Check out this 8K footage shot with the Pro 2 of a student news broadcast at Quinnipiac University:

If your computer is beefy enough to handle the full 8K here, it looks absolutely amazingly detailed and crisp, and even downscaled, it looks great.

And if it’s still photos you are after, the extra resolution and better stitching from six lenses versus two are readily apparent in photos. I compared the Pro 2 to the Insta360 One X, which I consider one of the best sub-$1000 360 cameras out there (and I’ve used many, many brands) and while it holds its own, the Pro 2 definitely provides a lot more detail, dynamic range, and resolution. Check out the Pro 2 here: 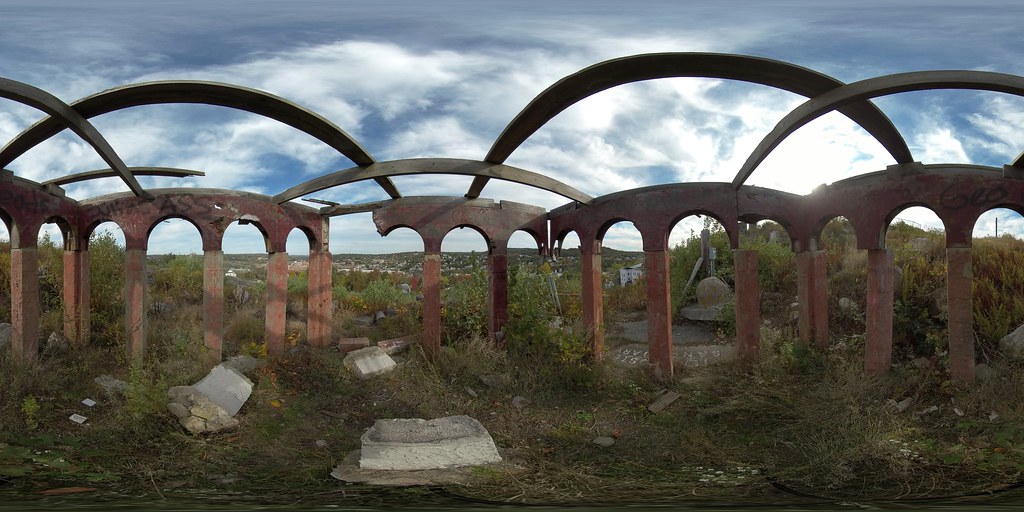 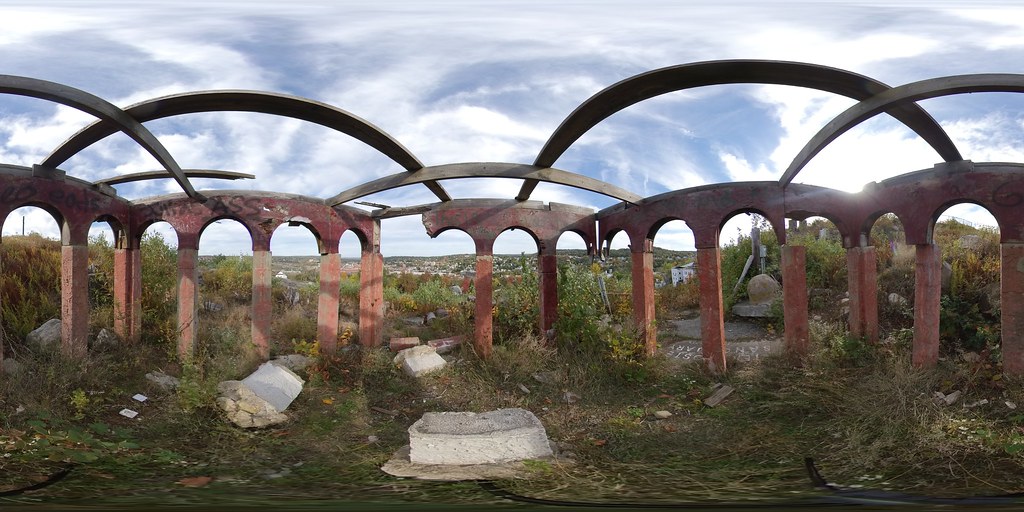 To some, the image quality is close enough it might not matter, especially with the compression that’s apparent in most ways to view 360 images on the web. But it’s the other features that pull the Pro 2 away from its entry-level brethren and most of the other competition out there.

First, with 360 footage, you’re wrapping a flat image around a sphere. While 4K video may cut it for 2D imaging, with 360 video, more is always better. At 8K, the Pro 2 sits comfortably above most other cameras, and footage on a monitor looked clear and crisp (and you can also view this in a headset at this high resolution with Insta 360’s proprietary Crystal View 8K 3D playback software, which works some computational and software magic to pump high resolution footage to lesser devices).

Additionally, the big upgrade for the Pro 2 over the Pro 1 and many other 360 cameras is the use of a memory card capturing video from each lens because of the very high bit-rate. While this adds a bit to post-production, there’s no denying that the 120-mbps per lens bitrate and extra work pays off here. Footage looks awesome and can be shot in both 2D and 3D modes. I haven’t had the chance to try a Titan yet, but short of bundling together several DSLRs on a custom rig, this is about as good as it gets.

Still images have a lot of pop to them, and the ability to shoot raw files (in the DNG format) makes editing easy. The files themselves have a lot of dynamic range, as I was able to dig into the shadows and recover highlights in a similar fashion to a good APS-C or Micro Four Thirds camera. Image quality is going to be the primary reason to step up to a Pro 2. Here’s another shot from Holy Land USA that has some tricky highlights and shadows, but looks great after processing the DNG file: 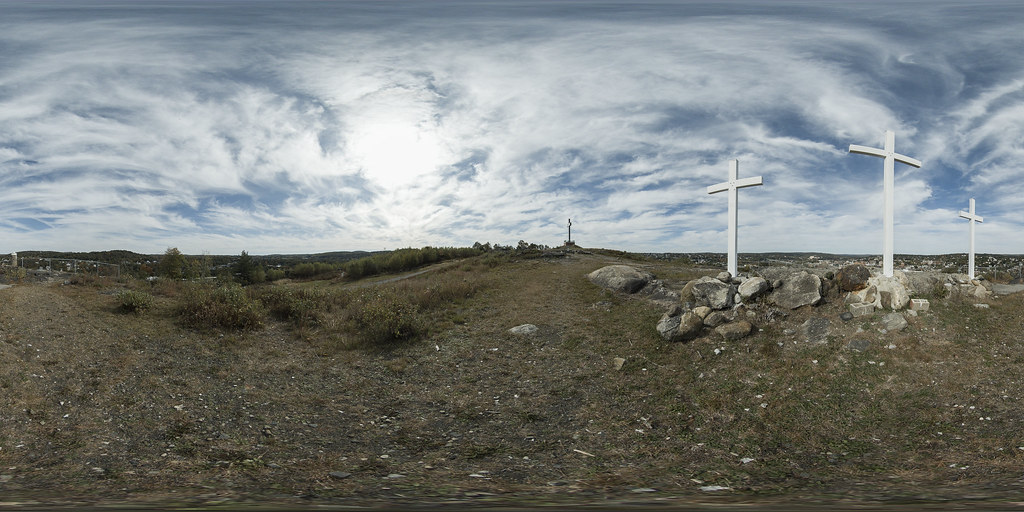 The amount of fine control available from the app means you can dial in or bracket an exposure exactly as you would with a DSLR, and get a live preview (except with long exposures, of course) as to how things would look.

For video shooters, FlowState stabilization, a feature that was missing from the earlier Pro model, is now included in the Pro. It’s something Insta 360 has always excelled at in its cameras and it’s no different here.

There are some other features that give this an edge for production work over a consumer grade camera. Chief among these features is the Farsight monitoring system, a transmitter and receiver combination that can give the Insta360 Pro 2 insane range over standard Wi-Fi, which is the way most 360 cameras are controlled.

The Farsight system uses your phone or tablet (in this case, my iPhone 6S) and hooks it up to a receiver that boosts the signal range to control the camera significantly.

Using the camera’s built-in Wi-Fi, I was only able to get about 10-20 feet in real world usage, and would lose the connection through most walls or obstacles. It was a headache, to say the least, but one that afflicts all 360 cameras. With the Farsight monitor hooked up to the camera, I was able to control the camera through walls and at quite a distance from the camera (I have a quarter-acre and was able to control the camera inside the house from outside in the backyard, which should be more than enough for most productions to hide a camera operator). It’s also possible to purchase the system separately and use it with the original Pro model.

One hangup for me, though, was that there are two different frequencies that the controller operates on that are baked into the device — and my initial review unit was shipped with a transmitter and a receiver that were on different channels. I tore my hair out trying to get it working until a call with Insta360 revealed the issue. Once I used two properly paired units (transmitter and receiver) I had zero issues and everything connected instantly. If you’re buying your own unit new in the box, this isn’t an issue, but it’s something to watch out for if you’re renting or using multiple cameras on a shoot. It’s worth the hassle for the extra distance (Insta360 claims 300 meters for ground-to-ground transmission and more in the air) to avoid Wi-Fi disconnects and possibly ruined footage or photos as a result.

That said, if none of the wireless options are your cup of tea, most controls for shooting are available directly on the camera through the LCD screen.

But What’s the Catch?

When you’re stepping up to this level of camera, you’re giving up a level of convenience and ease of use that’s available on consumer models like the Insta360 One X. With that camera, you can edit video right on the phone, add pivot points, and generally do everything you want to do without ever having to touch a computer. That’s definitely not the case with the Insta 360 Pro 2. With six Micro-SD cards (one for each lens) and an SD card for images and GPS information, getting footage is a process. Insta360’s recommended way looks like this:

This is the setup (a hub and 7 card readers) Insta360 includes to import footage into your computer. It's clunky and frankly a little insane, but it does the job just fine using the Insta360 Stitcher software.

But despite the intimidating looks, if you’re careful about importing this way with Insta 360’s stitcher software for its Pro series of cameras, it all just works. To complain about this multi-step importing process shows how spoiled 360 shooters are for choice these days. When I started shooting 360 video, it involved a ball of GoPros in a specialized housing that required manual stitching that never looked great or was as simple as Insta360’s software makes it, even if it’s not as easy as editing on a smartphone. The stitcher software supports built-in nadir patching and raw photo output, in addition to video stitching capabilities. Be prepared to take a computer break though, as stitching 8K footage can take a long time — up to several hours — depending on your machine and how long the clip is. This is a camera you definitely want to load up on the horsepower for.

I had trouble playing 8K footage (whether the actual file or a YouTube export) on anything but my most recent desktop PC containing an Nvidia 1060 video card. A fully speced 2013 era 27” iMac and a mid-range 2018 MacBook Pro couldn’t play back 8K files without dropping frames. If you don’t have a computer that can handle 8K footage, give some serious thought about how you’re going to edit and watch the footage. That said, the company does offer a “No Stitch” editing plugin for Adobe Premiere Pro that uses proxy files, and so while you may not be able to edit natively in 8K, this setup should allow for easier editing with a final export to 8K.

There's also live-streaming included in 4K here, and you can pump footage to YouTube, Facebook, or other methods that support the RTMPS standard, but it frankly required a lot of network cables, a laptop, and a router to be handy. Don't expect to live-stream from your phone. The footage is too heavy for that. That said, if you have a large-scale or important event and you want the quality, taking the time to set this up will give you higher quality than most consumer grade cameras, which can't live-stream at 4K.

There's a definite learning curve to this camera. When it arrives in its custom-made Pelican-style case and with lots of wires and parts, it's intimidating. The software requires a steeper-than-average learning curve. But for all of that extra work on the front end, you'll be rewarded with some of the highest quality 360 footage you'll get in this price range, and a significant step-up from the more consumer-oriented models.

For users looking to eke as much quality as they can out of any shoot, it’s worth it to spend the money on the Insta360 Pro 2. While 8K may not be a thing today, shooting your footage (and photos) at the resolutions this camera is capable of will future-proof your work and provide a quality boost even when downscaled to today's standards. Insta360 has a definite winner in the Insta360 Pro 2, with meaningful upgrades for any casual 360 shooter looking to raise the quality of their current work. If you're looking at going the professional 360 route, the Insta360 Pro 2 should definitely be on your shortlist of cameras.

Not just 360: While looking at content in 360, stills and footage captured from the camera can create interesting 2D content, like this "Little Planet" of a steel spin originally captured in 360. (Photo by Daniel Passapera, used with permission of the photographer)

Click on the following link to purchase the Insta360 Pro 2 with Farsight monitoring.

I bought this little beast a few days ago. It is very easy to operate but takes sometime in post to get good results. The downsides I found so far are the battery life, the need to remove sd card before use and the lack of integrated farsight system. Otherwise it works brilliantly!

Thanks for a great article!
Robin Eriksson